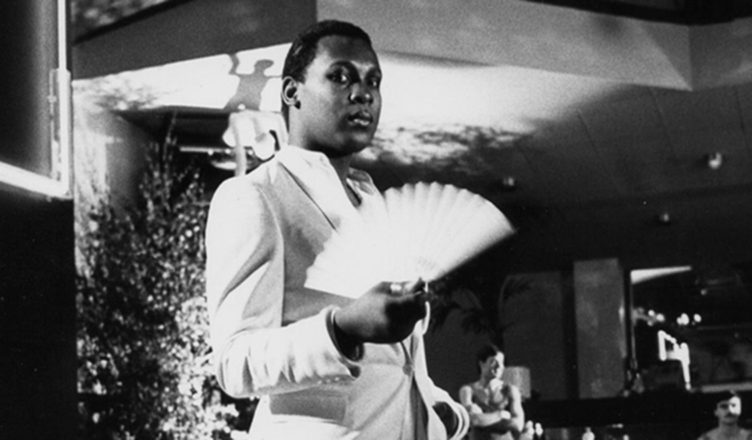 Disco was born in underground gay clubs in downtown New York and Fire Island, where DJs spun danceable R&B into heady, sweaty, extended highs. The music’s fusion of synthesized affects and “whole body eroticism” made it ripe for commercialization and appropriation.1 The coopting of disco robbed the music of its liberatory power while rendering it vulnerable to backlash. Disco was immolated on a baseball diamond in 1979. Radio DJ Steve Dahl, put out because his rock station was changing formats, and because dance culture was too fashionable, too fit, too fey, too black, called on the disenfranchised rockers of Chicago to blow up their disco records in a beer-fueled rally at Comiskey Park.

This is a love letter to a video artifact.

Produced one year before disco’s immolation, the video was shot at The Embassy, a gay club on Old Bond Street in London that drew a mixed and glamorous crowd.

I latch onto a series of gestures.

For his second album, Sylvester wanted to record a “concept album about Harlem in the twenties and thirties.” His band wasn’t convinced. “Sylvester’s bringing in another Magnetta Washington song,” they’d chide, a fictional figure invented to amalgamate, and mock, his muses.2

At one rehearsal, guitarist Tip Wirrick offered a riff and Sylvester improvised a vocal line. “There weren’t a lot of words,” Sylvester recounted, “but they said exactly what was going on: to dance and sweat and cruise and go home and carry on and how a person feels.”3

The track came alive when Patrick Cowley, the lighting tech at City Disco, contributed an unearthly, futuristic synthesizer track. Nevertheless, no one involved in the production was particularly excited about the song.

“Here were all of these people putting out disco,” Sylvester said, “making lots of money and becoming famous and everything, so we thought, ‘why not?’ We’ll put it out and nobody will like it and we certainly won’t like it, but we’ll do it.”4

But people did like it. Enormously. Fantasy Records sent Sylvester on a grueling tour of London, seventeen appearances in seven days. He was sometimes described as “a younger, plumper Eartha Kitt.”5

This is a love letter, too, to Sylvester’s many collaborators, muses, caretakers, and fans.

One new friend emerged during the London trip: Sharon Davis, a reporter for Blues and Soul. She accompanied the tour and wrote a cover feature complete with a Sylvester centerfold and a contest with a prize: a signature Sylvester fan.

Davis wrote about Sylvester’s handsewn costumes and how, when he wanted her to be quiet, he’d hit her on the knee with his pink folding fan. “Not a lot of people know this,” she recalled, “but when the video was filmed… I’m kneeling under the staircase holding steady a loose step as Sylvester, dressed in black leather, walks down it.”6

Cosey Fanni Tutti, then a member of Throbbing Gristle, also lent her support. An experimental musician and performance artist living in London, Tutti was creating her own pioneering work on the intersections of sex, commercialism, pleasure, and electronic sounds

She was working at a stripping agency at the time, and was part of a group of female performers (both studio and exotic dancers) hired for the video:

All of us were given white satin shorts because it was at the Embassy Club and all of the male waiters there used to wear white satin shorts. Sylvester wanted the men in the shorts but he was stuck with these ten dancing girls instead. So the director said, “will you dance to the music?” Like you said, it’s a fantastic song but these Pineapple Studio girls were going, “…2, 3, 4, 5, 6, 7, 8, 9, 10…” [mimes intricate but stiff dance routine]. And I was thinking, “Fuck me, it’s so regimented—why don’t you just listen to the record and dance?” I think the director ended up using us and one or two of the girls from the Pineapple who could let loose a little bit. But Sylvester got the boys in at the end. I think you can see them at the end of the video. He did get his way. I kept my shorts and I made a pattern off them so I could make more pairs. They were really good for stripping in.7

When disco left the queer cocoon of community-based clubs, it began meshing with the broader movements of contemporary capital: disco became an “operating system.”8 Data processing, via synthesization, masks itself as affect, a feedback loop between the between DJ, mixing board, chemical stimulants, and the listeners’ bodies.

In the mid-1970s, Douglas Crimp collected notes on what struck him as a technologized “dancing machine”:

Place: Synthetic materials, industrial gloss, futuristic, spacey, technologized surfaces and lighting. Enormous plants and bowls of fruit appear as if technologically produced, having no similarity to natural objects. Views through doorways to the outside world are extremely disturbing. Views of reality look unreal, nightmarish, tacky. Going outside is always a shock, and it takes days to readjust to ugly reality.

And yet there is something in the looping of the sparse lyrics of this video, the looped beats, the looped gestures, something in Sylvester’s constrained performance that resonates. The crass and obvious reuse of the same snips of footage. The appearance of the same satin stripper shorts on the bodies of the male waiters and the female dancers. Something in the absurd repetitiveness of their movements seems to aspire to the machinic, but which, in their failure, feels real.10

The pivot towards or (more pointedly) away can signal a transition of states, surprise, hair-toss flirtation, dismissal, an invitation.

Sylvester’s pivot is both more complex and more cutting.

Disco’s tweeter arrays and bass reinforcement made “distance—and therefore irony” impossible on the dance floor.11 But distance and irony are ample in the promotional video clip.

This pivot refuses the money shot of vocal/facial synchronization, the diva with her eyes closed, mouth and larynx splayed for our roving gaze. This, Sylvester’s pivot tells us, is an openness that the video, and we, haven’t earned. Not for this camera. Not here. Not for you. Not yet.

Given Sylvester’s citational devotion to the history of black female performance, it’s hard not to read his conscribed, precisely controlled movements here in relation to similar strategies of self-preservation (for example, the reserved gestures of the early Supremes).12 The pivot limits exposure, but it functions more as a delay than a categorical rejection. The pivot postpones fulfillment, but the loop sustains us, just on the cusp, as it moves through the collective body of the dance floor.

There’s a story about disco that goes like this.

It begins with the disco that did not yet know it was disco, because this is also a love letter to Nicky Siano, José Muñoz, Larry Levan, Tim Lawrence, Richard Dyer, and Douglas Crimp, who I’m shamelessly channeling and looping. This thing that was before there was a thing called disco was played at The Firehouse, where the Gay Activist Alliance would host weekly dance parties, communal celebrations that helped to fuel their political organizing. Spin-off parties, coordinated by young black, Italian, and Latino gay kin, sprang up in private spaces and members-only clubs like the Gallery and the Loft. They restricted entry not out of elitism, but to protect their communities.13

While commercial appropriation had an impact on disco’s dissolution, the AIDS epidemic dealt a swift and devastating blow. Patrick Cowley. Michael Brody. Walter Gibbons. Arthur Russell. Nearly the entire staff at Megatone Records. The Saint in New York went out of business not because disco had become unfashionable, but because so many members died.

In this story, AIDS didn’t kill disco. But it changed the soundtrack to a movement that was always bigger than a commercial genre.

Sylvester succumbed to AIDS-related illnesses on December 16, 1988. While he had gone into debt later in life, his estate was structured so any future royalties would be directed to AIDS activist organizations. To date, over $140,000 has been donated to the AIDS Emergency Fund and Project Open Hand. And much of that revenue has been driven by the continued popularity of this song, never his favorite, but nevertheless a sustaining force.14

What else is a queen to do?

Give one’s self as an offering.