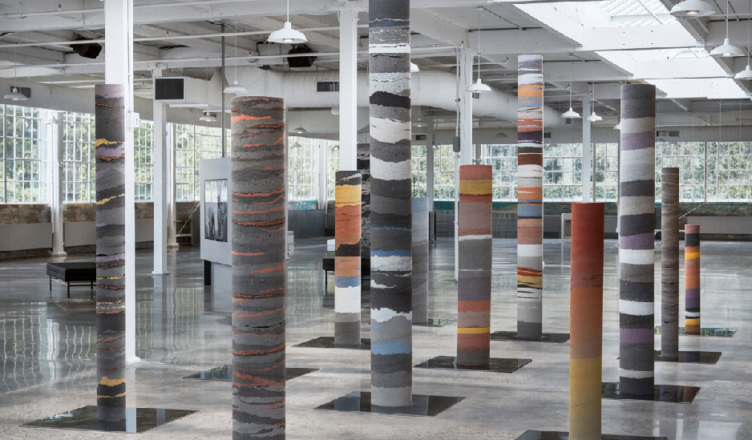 This season saw the inaugural Toronto Biennial of Art, an initiative that brings new scale and ambition to contemporary art programming in the city. Spearheaded by gallerist Patrizia Libralato and curated by Candice Hopkins, Tairone Bastien, and Katie Lawson, the event features hundreds of works and dozens of programs across 23 sites. Venues include ad hoc exhibition spaces, public sites such as parks and train stations, an IMAX theatre, and a cast of major art galleries showing parallel exhibitions by biennial artists. Save for the art galleries, these sites are deliberately oriented along Lake Ontario and its tributaries, as per the biennial’s theme, “The Shoreline Dilemma.”

With its chosen theme, the Toronto Biennial distinguishes its civic role by taking the city—its very terrain—as its starting point. From there, the Biennial delves into the waterfront’s deep geography: the topographic and social landscapes that have historically comprised the region, from the time of its earliest known settlements (ca. 10,000 BCE) to its rapidly evolving present. Moreover, the Biennial embraces the intrinsic problems of documenting this space: much as it is technically impossible to map a shoreline—to schematize the fluid—it is impossible to distill natural, urban, and human geographies that have ebbed and flowed over countless generations. The shoreline itself has dramatically changed over the last two hundred years, particularly with colonial and capitalist interventions and, with them, urban expansion. In that time, land treaties have been drawn and dishonored, waterways have been modified, and the rubble of downtown developments have formed spits that are now, ironically, among the city’s most natural environments. Likewise, cultures and societies have come and gone, industry has emerged and declined, and urban redevelopment has taken hold—on the side of both gentrification and the commons. The Biennial places itself on this stage, mining the site’s complicated history to take stock of its conflicted present and uncertain future.

As in any large art fair, the featured works address the official theme with varying explicitness. Among the contributions directly engaged with the biennial’s prompts, two interventions by the Brazilian artist Maria Teresa Alves stand out. Commissioned especially for this event, these works map land where rivers used to flow. In Phantom Pain, 2019, Alves lays a serpentine line of steel plates upon the grass of Riverside Park, marking the former path of the Don River before it was straightened to expedite the flow of polluter water. Elsewhere, the installation Garrison Creek, 2019, features a pile of fiber bags filled with soil excavated from the Garrison Creek Ravine. The pile sits underneath a cloth sheet that bears a photo of the erstwhile creek, as it was being filled to accommodate residential development. Through direct engagement with the land and its deliberately altered topography, Alves generates an archival inquiry into the manifold ways that socio-economic imperatives have shaped Toronto.

The shoreline does not figure into the preponderance of works but serves instead as a jumping-off point for a number of interconnected topics such as ecology, migration, resource extraction, maritime power, sovereignty, and most of all, indigineity. The widespread rise of indigenous art is easily the largest development in local and national art of the 2010s, following the broader rise of indigenous discourse in Canadian culture and politics. On that front, the Biennial foregrounds the knowledges, ethics, and aesthetic forms that draw on indigenous relations to land and water, along with the conflicts they have faced. This emphasis is evident in the Biennial’s programming, which features varied aboriginal artists—mostly from the Great Lakes region, but also from areas like New Zealand and the Amazon—and diverse art forms, ranging from more vernacular creations (e.g., drawings by artists such as Napachie Pootoogook or Qavavau Manumie) to multi-media installations.

Notable examples of the latter tendency include AA Bronson’s multi-year project, A Public Apology to Siksika Nation, and Adrian Stimson’s response, Iini Sookumapii: Guess who’s coming to dinner?, 2019. Commissioned specifically for the biennial and conceived in dialogue, these dual contributions highlight the two artists’ tangled inheritance: Bronson is the great-grandson of the first missionary on Siksika territory, while Stimson is the great-grandson of Siksika chief Old Sun. Although the backstory feels almost idealized—the ancestors of archenemies, collaborating to address historical trauma—the artists don’t limit themselves to that narrative. Their exchange—which has materialized as a public performance, book, installation, sculpture, and a display of archival documents—pivots on, rather than foregrounds, Bronson’s apology, expounding the wider stakes of the history they jointly explore. In so doing, Bronson and Stimson avoid the clichés and cultural blinders that make more institutional forms of Truth and Reconciliation appear lukewarm by comparison.

In my experience, the Biennial’s most interesting exhibition is at the Small Arms Inspection Building, a repurposed munitions factory in a neighboring municipality, Mississauga. Far from the urban core, it’s less likely to attract uninitiated visitors. Perhaps for that reason, the curation favors many more abstract or subdued works, emphasizing the formal and material nuances of art across media. The space is open, airy, and wonderfully bright, and the works on display complement the venue’s grid-like structure. Pieces like Pleasure Projects, 2019, by the Norwegian-based New Mineral Collective (Tanya Busse and Emilija Škarnulytė), are nothing if not beautiful, and not without reason. Cast from prospecting bore holes, the columnar sculptures reveal alternating, variously colored and intricately patterned strata of copper, zinc, and aluminum, among other elements. Like many works here, this piece reflects on the social and economic values of earthly materials, refracted through their aestheticized re-use as art objects. Similar reflections on the art objects’ materiality include Abbas Akhavan’s Study for a Garden, 2017, which sculpts an ordinary bundle of wooden branches from bronze; Caroline Monnet’s The Flow Between Hard Places, 2019, which translates speech to sound-wave to sculpture, giving durable form—the work is in ductal concrete—to fleeting iterations of an endangered indigenous language; and Jumana Manna’s Cache (Insurance Policy), 2018-19, which combines prefabricated metal grids with ceramic khabyas, traditional Levantine seed containers.

It is worth keeping a Saturday afternoon open for The Drowned World, the weekly audio-visual program at the Ontario Place IMAX theatre, a cinema in a geodesic dome that sits on the lake. Guest-curated by Charles Stankievech, The Drowned World features works of film, digital media, music, and literature that tap into contemporary anxieties about ecological crisis and the future of the anthropocene. Alongside visions of turtles in underwater subway cars or villages displaced by omnipresent vapor, we get readings of Clarice Lispector and the nautical electro-music of Drexciya. The program’s range of media and focus on experimental aesthetics, not to mention the unusual experience of seeing this kind of work in an IMAX theatre, make The Drowned World equally demanding and engaging.

Within The Drowned World, a notable piece is Revital Cohen and Tuul van Balen’s 2017 film, Trapped in the Dream of the Other, which depicts a mine in the Democratic Republic of Congo. As the camera moves through the site, flares periodically ignite, enveloping the sky with plumes of colorful smoke. The flares call to mind Judy Chicago’s Atmospheres, 2019, on display at the Small Arms Inspection Building. Atmospheres consists of a series of photographs that document Chicago’s pyrotechnic performances in California from 1968 and 1974. While these works bear little in common (one explores the global supply networks that run through central Africa, the other is a feminist intervention in American land art of the 1960s and 70s) the visual consistencies are striking. Taken together, these works present an interesting example of how comparable artistic strategies differ across contexts. In these different settings, antipodes of globalization’s economic and political asymmetry, similar actions hold very different values. Yet the inverse is also true, here as in many works throughout the Biennial. Existing sites and structures—whether natural, institutional, or social—remain mutable. While that mutability tends to serve power more often than publics, it also means that the order of things is not total. My takeaway from the Biennial, then, is that critical art doesn’t state, much less affirm, what is, but instead navigates historical, political, and natural flux to reorder the conditions of the present.

For all its merits (a free, public biennial of international contemporary art is always welcome), I wish the event might reflect more fully on its own role within its chosen milieu: its physical location but also its place in contemporary art’s cultural economy, that bedfellow of urban development. In other words, I wonder how the Biennial sees itself as an agent of change in the city’s waterfront, and as a representative of Toronto in the art world’s international networks. Certainly, the event has a role in shaping the city’s socio-cultural landscape, meaning its physical landscape as well. And certainly, the event is intertwined with the larger power networks driving the transformation of these landscapes (condo developers and mining companies are among its major sponsors). To the extent that the Biennial reflects on the terrain it occupies, I hope that future iterations will address the footprint it creates in doing so.

Edward Bacal is a Toronto-based writer whose work focuses on the intersections of aesthetics, politics and ethics in contemporary art and visual culture. He holds a PhD from the University of Toronto’s Department of Art History, where he studied the application of post-minimalist aesthetics in contemporary, politicized art. His writing has appeared in publications such as Parallax, Canadian Art, and CineAction. More information on his work is viewable at Edwardbacal.com