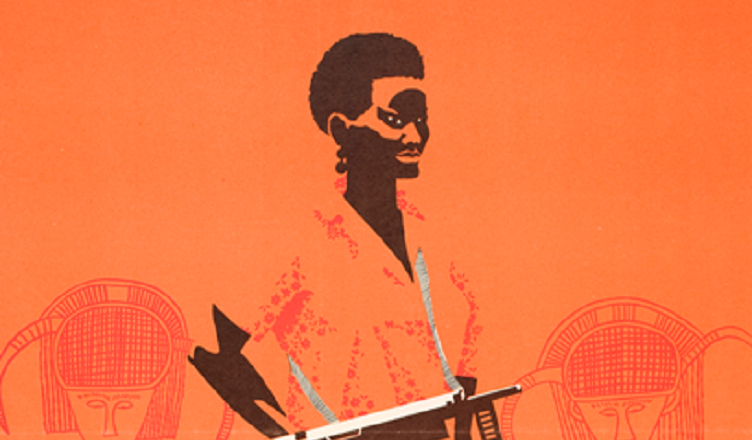 “You are entitled to metaphysical and physical shelter… You are entitled to rest,” says actor kenya (robinson) in the Random Acts of Flyness episode “They Won’t Go When I Go.”1 In this series, creator Terence Nance shows black women exploring the complexities of their being as a counterpoint to their otherwise limited art and media portrayals. Despite being produced by HBO, a powerful participant in the spectacle of global capitalism, it represents black women in profound and complex ways. kenya (robinson)’s call for shelter and rest have framed my reflections on Asad Haider’s thoughtful Mistaken Identity: Race and Class in the Age of Trump. On my mind as I respond to his book are the intersections among political, art historical, popular, and visual-cultural representations of and by black women. In so doing, I contemplate how black women’s attention to self-care may enhance our coalition-building, as demonstrated since the 1960s (Haider’s focus) by the efforts of the Combahee River Collective, the Black Lives Matter work of Patrisse Cullors, Alicia Garza, and Opal Tometi, and Simone Leigh’s organized Black Women Artists for Black Lives Matter movements, among others. In what follows, I am free in my use of points of view, employing first, second, and third person with fluidity; in so doing, I somewhat mirror both the manifesto tradition and the personal is political tone of Haider’s writing.2

Put simply, I submit that if we black and brown women pay focused and consistent attention to our physical and inner well-being, then our resistance and organizing work may continue on with more effectiveness; or to use the poetic words of Alexis Pauline Gumbs, “when she breathed, her people felt free.”3 Although Haider rightly points to the significance of our contributions to coalition-forging across boundaries during our current era and historically, I would like to sound a cautionary note in the spirit of camaraderie: We should not do this work without being replenished and nurtured. How will those that we work for and in collaboration with pay it not only forward, but pay it back in ways that contribute to our longevity and well-being? Following Haider, my rationale is informed in part by the Combahee River Collective, who state: “Above all else, our politics initially sprang from the shared belief that black women are inherently valuable, that our liberation is a necessity not as an adjunct to somebody else’s but because of our need as human persons for autonomy.”4 In light of this perspective, I call for some addendum to the use of black activist theory and coalition-building offered by women to accompany our discussions emerging from Haider’s book and elsewhere.

To be sure, there is some significance to the idea of black women warriors, if only in opposition to the narrative of passivity and acceptance of servitude that was so long forced onto people of African descent, and especially women. Haider recalls that during the Ferguson protests, the media circulated depictions of activists succumbing to police violence while limiting images that showed their real status as figures of strength against state brutality. He cites Robin Kelley: “Reading black experience through trauma can easily slip into thinking of ourselves as victims and objects rather than agents, subjected to centuries of gratuitous violence that have structured and overdetermined our very being.”5 Haider cites Kelly further to explain how the “memory of freedom” empowered “enslaved African people”6 to resist the spectacle of their dehumanization that continues today, to our social, corporeal, and “metaphysical” detriment.”7

The visuality of black women as “warrior” resistance agents, both at home and abroad, contributes vitally to the visual culture of the protest and political posters of the 1960s and early 1970s, contributing to the image of the guerilla warrior widely circulated at the time.8 U.S. Imperialism Get Out of Africa! (Mei Diguo Zhuyi Cong Feizhou Gun Chuqu!) (1964) (Figure 1), a Chinese poster of the era, features a black woman carrying a baby on her back and clutching a firearm while confrontationally meeting the viewer’s eyes.9 Resistance is also palpable in Berta Abelénda Fernández’s Day of Solidarity with the People of Guinea-Bissau and Cape Verde (1968) (Figure 2), a Cuban poster depicting a black woman standing in profile, wearing a fashionable contemporary ensemble whose geometries echo those worn by African warriors, who are etched in the background. Whereas her warrior ancestors are armed with traditional weaponry, a modern military-grade gun rests at her hip, her expression promising that she knows how to use it. The image of the black woman as warrior is writ large in the graphics of Emory Douglas, the Black Panther Party Minister of Culture, such as the pink-and-white print of a woman with an afro, dangling earrings, and a fashionable geometric blouse, poised with weapons as if ready to defend the words that accompany her: “Afro-American solidarity with the oppressed people of the world” (1971) (Figure 3). The contemporary activist collective, E.D.E.L.O (En Donde Era La Onu), dedicated to using art to transform the violence of our global society,10 worked with the Woman’s Zapatista Embroidery Collective and Emory Douglas in a Chiapas, Mexico, residency to make tapestries based upon Douglas’s prints, the aforementioned work, among them. In La Rebeldia Se Globaliza Cada Dia, (2012-2016) (Figure 4) Douglas’s rebel is outfitted in Zapotec floral designs, the rifle on her back is a stalk of corn and the spear in her hands is updated as a glowing white laser, her image as a revolutionary remade anew with a new spirit of collective agency across cultures.

With this rich visual cultural history of the black woman warrior as agent of collective resistance in place (and the realities these images may signify, evoked), the question emerges: “What are the counter-poses to the ‘warrior series’ that black women dutifully and consistently perform?” Although self-care is an overused term these days, it is relevant to black women’s coalition-building efforts and does not emphasize “a demand for… [an individual’s] security and recognition,”11 as offered by the state, but rather argues for the cultivation of inner peace. I remain hopeful that this can be achieved without unconscious acquiescence to the machinations of global capitalism. Through this cultivation, I believe we can align with our inner knowledge that “the other is everywhere, even in you”12 and that we have the power to reinvigorate what Haider calls “the legacy of… [an] insurgent universality, which says that we are not passive victims but active agents of a politics that demands freedom for everyone.”13

As the consummate coalition-builders and protectors of others’ freedoms—or as Audre Lorde puts it, “Black women tak[e] care of business all over the world,”14—I suggest simply that we black and brown women take time to assess and reflect upon the argument for connection with and cultivation of the self, in resonance with Haider’s hope for the “universal emancipation appear[ing] on the horizon.”15 I am calling for radical self-care, following bell hooks,16 Bree Newsome,17 and Lorde.18

Newsome asserted that her practice of self-care empowers her to carry our her activist practices and as such, likely helped her garner the inner and outer fortitude to scale a 30-foot flag pole in front of the South Carolina State building in order to remove the confederate flag (Figure 5).19 As Lorde noted later in life, she adjusted her activist, writing, and life practices to accommodate “time spen[t] each day treating my body, and I consider it part of my political work… a kind of training in self-love and physical resistance.”20 She continues: “Find some particular thing your soul craves for nourishment—a different religion, a quiet spot, a dance class—and satisfy it. That satisfaction does not have to be costly or difficult. Only a need that is recognized, articulated, and answered.”21 Radical self-care empowers us to exercise our “right to escape”22—to move beyond self- and externally imposed limits by enacting such modes of inner attentiveness and cultivation. Haider’s discussion of freedom of mobility chimes with these ideas:

Many desires spur immigrants to travel, but they are united by what Sandro Mezzadra calls ‘the right to escape’: to escape from poverty and persecution, to discover new geographies, and to speak in new languages. The desire of the immigrant is a world with no borders, a world with no detention, a world in which humans move freely and welcome every stranger. It is the recognition that it is possible to think, speak, and live otherwise.23

Black and brown women who are already actively exercising your self-defined will, or desire to do so, fine-tune your inner and outer body at all costs so as to live your own “right to escape,” which will, in turn, bring the “universal emancipation on the horizon” ever closer. As Sandi M. Tenfelde and colleagues note, through yoga and meditation we can significantly reduce the chronic stress, swelling, and hypertension that may emerge as we undertake the work of coalition-building, advocacy, theory creation, platform-writing, and teaching, in addition to tending to the daily operations of ours and others’ lives. We can start mindfulness meet-ups where we live or utilize online yoga and meditation sites at home in private, customized by our collective and individual designs.24 Helpful here might be the recent work conducted by Sonasha Auset Braxton, who explores how Kehmet Yoga, originating in Egypt, has been used to treat black female survivors of childhood sexual abuse25 for those seeking to make ancestral African connections with their practice. Also emerging from a sense of black consciousness are the offerings of South Los Angeles-based yogini, Brandi Polk, who teaches Trap Yoga, among other Vinyāsa approaches. She is dedicated to making her yoga classes accessible to the community by providing discounts and establishing a tenor in her studios transcending the mainstream U.S. yoga culture’s race, gender, and class limits. Polk explains, “Given what’s happening in the world right now, people of color need more ways to direct our energy, not just externally but internally as well. Women of color especially deal with a lot every day, and yoga gives you another set of tools for navigating the world.”26

I suggest that the development of yoga and mindfulness protocols is in the spirit of the Black Panther Party’s public healthcare activism of the late 1960s and early 1970s highlighted in its amended sixth platform of its ten-point program:27 Dynamics of Self and Community Care. We might imagine that by implementing this platform for ourselves, the physical and mental focus of the radical women illustrated in the graphics of Douglas, Fernández, and others, may be attainable:

We believe that the government must provide free of charge, for the people, health facilities which will not only treat out illnesses, most of which have come about as a result of our oppression, but which will also develop preventative medical programs to guarantee our future survival.28

As Random Acts of Flyness actor Mandella Bellamy declares: “I only have one body and I have plans for it, none of which involve saving you.”29 Let’s live the notion that, through the focused, self-reflective cultivation and realization of these plans that are brought to light and into being through radical attention to our inner selves and bodies, we can achieve the fortuitous outcome of safety and freedom for ourselves and all others. Answer Lorde’s imperative to practice “deep breathing, regularly.”30