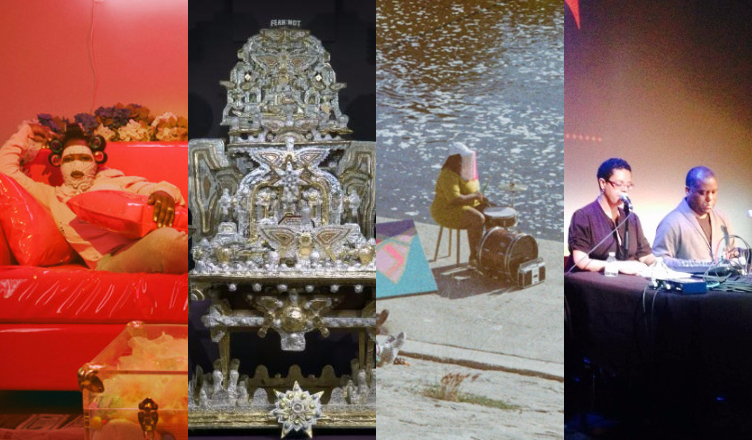 Leikeli47’s mask redirects the eyes, and the ears. Masked individuals are transformed, but also bound, and not always comfortably, in anonymity, collectivity, legacy, freedom, isolation.1 In the rising tide of COVID-19, with mass masking, combat between cops and anti-racist organizers in the streets, and the shuttering of Black communal spaces like beauty salons, Leikeli47’s project seems amplified and all the more urgent.

A self-described introvert, Leikeli47’s storytelling strategies bear the hallmarks of an intuitive listener. Gathering snippets of narratives, gestures, cinematic images, and sonic textures, her songs are less traditionally autobiographical, and more collaborative portraits of spaces and their people. Leikeli47 consistently tells us, through her recordings, where she is from, who she is with. There is a practiced generosity to her process. Sonically and lyrically, she weaves multiple perspectives and narrative modes, creating works that are at once documentary and speculative. “There’s hints of me in my songs,” she shared in an interview. “There’s hints of my friends. There’s hints of other people’s conversations. There’s hints of train rides. There’s hints of plane rides. That’s just what I am. Leikeli47 is strictly for the people. This is something created for the people.”2

The 2017 track “Braids tuh’da flo(w)” is an unapologetic celebration of Black femme material culture, leveling up, pliant strength, and the shared experiences of family, neighbors, friends.3 The mutual labor of upkeep and self-valuing is recognized here in meticulous detail and with a keen eye, always, toward the economics. “When you leave that salon,” Leikeli47 has remarked, “you don’t look like anything you’re going through.”4 Her “Beauty Series” project spans a diversity of genres, influences, and vocal inflections with a devotion to ballroom that persists throughout alongside trap, jazz, West Indian patois, pop, R&B and soul, drumline, skits, even a little Ashford and Simpson.5 Yet the themes and creative strategies throughout are remarkably consistent. Leikeli47’s delivery is rapid fire, dripping with wit and swagger. She latches onto a phrase or hook and digs in, riding the repetitions alongside minimalist beats. Catwalking and ferocity brim, but are unfailingly feminist and inclusive, a musical best-girlfriend to all the queens.

“Braids” is a boast rooted in the sanctity (and specificity) of black spaces and the intimate work of care. Leikeli47’s declaratives steer the track with a certainty that the sparse instrumentation can’t help but follow. Each phrase, coupled by an ascending organ riff, ends with a piano chord thud.

A front line joins the chorus led by a trombone that slides off Leikeli47’s phrasing while snares snap up the beat. A chorus of female voices back the lead with approving responses. The anachronism of the production—part New Orleans hot jazz, part HBCU band, all high gloss, extensions, and nails-nails to the ceiling—feels like a musical analogue for the artist’s own here-but-there status: Virginia/Bed-Stuy via I-95, then LA, then back, explicitly now, but rooted in before, ever-present-but-not-seen.

Tanisha 25, look 18. 2 kids, Master’s degree.
Put her own self through school.
Hot damn, drinks on me.
Shamira got her own shop. Got the whole block hot.
Chairs stay packed, she getting racks.
Homegirl just bought a new drop.
Who need a man in my clique? Ha, not nare one bitch.

“Braids,” like most of Leikeli47’s tracks, is an invitation to the listener.6  Walk-ins are welcome, but on very specific terms. Personal and financial autonomy in “Braids” is hard fought, a source of communal pride, a means of building up the whole block. And the joy on display is explicitly centered not only in Black female comradery, but also in Black female ownership.

There is an ongoing dialogue between the beauty spaces figured in Leikeli47’s songs and those in her own neighborhood. The cover image from her EP Pick a Color (a 2018 “creative bundle” that preceded the full-length album Acrylic) features the shuttered storefront of 888 Happy Red Apple nail salon in Flatbush Brooklyn. In August 2018, the salon was the site of a vicious attack by staff on a young Black customer and her grandmother.7 In response to a viral video, the salon became a rallying site for the community. The metal security gate is papered with homemade signs: demands for justice, a Malcolm X quotation, a picture of the Brooklyn Borough President on a milk carton, and organizing meetings for “Buy Black Flatbush.” “Black $$$ Matters” became a sustained call to support and promote Black-owned Brooklyn businesses. At the center of this photograph, a woman in a red beret and hoop earrings reads the mural of flyers, a visual sounding board that has superseded the operations of the salon itself. The selection of this cover image explicitly frames Leikeli47’s fictional salons, like their real-world counterparts, as sites of intense personal and political negotiation. Pick. A. Color.

In this ravaged moment of human and financial loss, the disproportionate hit to local, Black-owned spaces for upkeep, refreshing, and mutual support is painfully felt. Listening to “Braids” now, it strikes me that Leikeli47 channels the narrative and musical vernacular of salons and barbershops: anonymity and extreme intimacy; posturing and self-invention; shared vulnerability; gossip and surgical take downs; empathy and amplification. Braid, flo(w). Noun, verb. Intimate objects that are simultaneously actions and ongoing labor. Leikeli47’s deep engagement with the social geography of Black beauty spaces channels these processes, and spins them into something worldmaking and resilient.