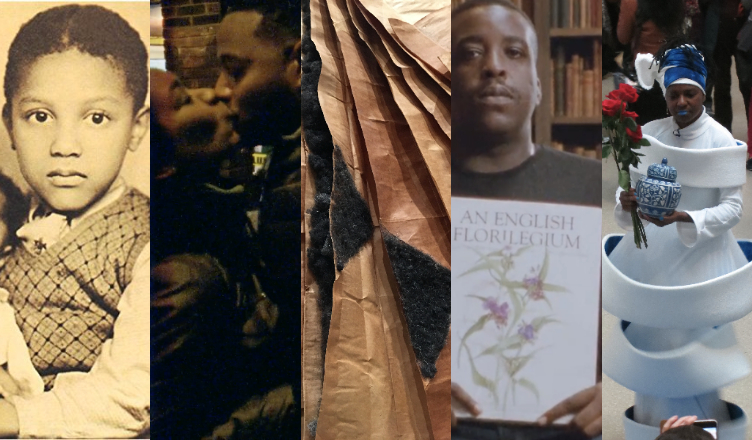 Questions of debt, dispossession, reparations, and the unfinished work of memory in the West are salient themes in the work of the Afro-Cuban artist Maria Magdalena Campos-Pons.1 In her work, the Caribbean emerges in all its messiness and complexity – its multicultural origins, its vexed colonial past, the psychic and material afterlives of slavery, the fraught political project of nation-building, and its formations of national identity. The Caribbean is, as Michelle Cliff writes, an imaginary place that sits somewhere between Europe, Africa, and North America.2 It is a place of meetings and conjunctions, where cultural streams intersect and are rearticulated into new forms of language and subjectivity. Campos-Pons’s 2014 Habla Lamadre at the Guggenheim Museum (April 27, 2014) powerfully performs this Caribbean as ritualized re-creation, reclamation, and reckoning.3

The performance begins with Campos-Pons leading a procession into the Guggenheim of eight female attendants who function as a chorus throughout the piece, three batá drummers singing traditional Orisha songs, and a group of horn players. In her hands she carries a bouquet of red roses and a small blue and white sopera or soup tureen that is used to house the ritual stones and tools of the orisha in the Yoruba religion. The stones and tools represent each orisha and are placed on the altars of practitioners. Campos-Pon’s thick locs are wrapped in a blue and white head tie. She wears a long white dress stacked with white foam rings that encircle her like the walls of the Guggenheim itself. Her dress rocks and sways like waves as she moves into the museum’s main lobby. Her entourage gathers around her in a circle as she steps onto a blue fabric square and begins to call on her ancestors.

The sound of the sacred batá drums fills the museum as Campos-Pons invokes the orisha and asks them to be with her as she delivers the message that she has come to share. She takes the fabric in her hand and appeals directly to Yemaya asking for her authority to lay claim to the museum space.4 She then begins to intone “Yemaya” over and over. When she speaks the powerful orisha’s name, the attendants respond with a series of call-and-response statements that reflect Yemaya’s maternal authority, which the artist echoes back to the group. Shoulders back, chin up. Yemaya. I brought you to this world and I could take you out. Yemaya. Because I say so, because I could say so, because I could demand you. Yemaya…Do as I say and be here and take hold of this institution and show the power of the black body and show the power of the black ancestry.

Following this directive, Campos-Pons resumes her procession through the museum winding her way along the Guggenheim’s round corridors to the second floor galleries. As she marches she describes the awesome and terrible powers of la madre: Yemaya is the mother. She is the mother who fight for her children. She is sweet. She is warm. But she is a fighter and when she need to protect her children she come.

While Habla Lamadre is performance art, it is critical as well to understand the work as an actual ritual performed not simply for aesthetic value but to transform the space of the museum itself. In this ritual, Campos-Pons becomes a spirit worker, calling on the mother of the sea to dispense justice and create a future that belongs to her dispossessed children. Her voice deepens and begins to quiver with rage, like a storm rolling in from the sea:

It took so long to make wrong right. It took so long for us to embrace the beauty and the right to be in this world. Yemaya, you fight for your people – show your power!

Campos-Pons juxtaposes the figure of Yemaya with Black feminist artist, Carrie Mae Weems, who like Yemaya has kicked down the structural barriers that have historically excluded Black artists and people from spaces like the Guggenheim. Campos-Pons’s literal embodiment of the Guggenheim, through both her dress and speech, makes a radical intervention by using her own black body to “[invade] the white space of the Guggenheim.”5 She claims and reimagines the museum as a black geography with the aesthetic traditions of people of African descent. These traditions that exist alongside and in dynamic tension with racially normative ideas of what/whose art belongs in elite spaces. In this sense, Campos-Pons’s performance embodies an aesthetic of foundational blackness, which frames blackness as central to the formation of Western modernity. This disruptive logic provides an alternative archive for imagining nation and selfhood. This is a not a unitary, essentialist, or ahistorical notion of “Africa” or blackness as formed in a void.

We are the next.
We are the future.
The 21st century dawns and it belongs to Yemaya’s children…

She is here to stay!

Courtney Desiree Morris is an assistant professor of Gender and Women's Studies at the University of California, Berkeley and a visual and conceptual artist. She is currently completing a manuscript entitled, To Defend This Sunrise: Black Women’s Activism and the Geography of Race in Nicaragua (under contract with Rutgers University Press). She is a social anthropologist whose research and art focus specifically on social movements and cultural politics in the African Diaspora. As an artist, she works primarily in the fields of large-format photography, experimental video, installation, and performance art. Her work has been exhibited nationally and internationally at the National Gallery of Jamaica, the Ashara Ekundayo Gallery, the Photographic Center Northwest, and the San Francisco LGBT Center. Learn more about her work at www.courtneydesireemorris.com