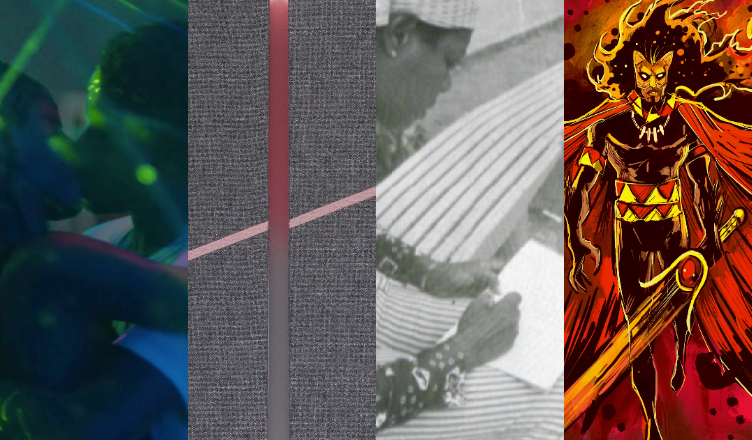 A pink band zips across two dark grey panels, jumping the gap between the two without breaking its trajectory. The band’s diagonal movement structures the composition as it places the dark grey expanse in the background that draws attention to its progression to the upper right corner of the painting. With this established orientation, the black rectangular box at the lower right portion of the piece appears almost like a subtext to the pink band as it either reaches its apex or ascends into some domain outside the visual plane. Another subtext: the strange glow and shadows that peek through the gap at the center of the work. Looking at this piece, note how the band’s upward incline and the shape of the black box recall the musical notations in the painting’s title, Fractured Crescendo, Rest (2019).1 However, it hardly resembles a piece of sheet music. Nor should it. Like the parables that Duke Ellington wrote into his compositions or the dazzling visuals of Wadada Leo Smith’s Ankhrasmation language scores, Fractured Crescendo, Rest projects an expansive idea of the visual life of (black) music.2 What is both remarkable about this artwork and what makes it pull at one’s imagination is how Jones taps into the visual language of graphic scores and musical notations as a conceptual resource for her art making. Here, the pink pigment of the fragmented crescendo symbol adds an intensity or loudness to what the hairpin usually signifies while the musical symbol for silence–the rest–resembles a redaction. When familiar symbols and marks depart from their conventional signifying operations, one has to do more than visually analyze the artwork.

Jones’s aesthetic sensibility of “listening as a conceptual practice” animates her ongoing consideration of experimental jazz and modernist abstraction.3 It also informs her interests in the geometrics of musical notation as minimalist form and her generative preoccupation with the interplay of acoustics and architecture. She injects sensation and historicity into the sparse and reductive aspects of Minimalism. “I feel like I always had a leaning towards the abstract, towards hard-edge.”4 For some, hard-edge painting’s preoccupation with the flatness of surfaces, clear delineations of colors, and sharp lines and contours make it incompatible with the historical weight and substance of Black creative expression. Jones does not see things this way. Whether there is a place for Jones in the tradition of hard-edge painting is irrelevant because her “leaning toward hard-edge” is already suggestive of a blackness that exploits the dormant capacities Minimalism harbors.

Fractured Crescendo, Rest reminds us where the unthinkable resides. It traffics in those indeterminate and unverifiable realms in which, like oblivion, the forgotten and degraded mingles with the strange and unknown.5 The dark grey acoustic panels of Fractured Crescendo, Rest find their beginnings in Jones’s ongoing series of “acoustic paintings.” These works exhibit the unwavering expanses of single pigments, abrupt transitions between colors, and depersonalized compositions of hard-edge. The size and prominence of the sound absorbing panels in the piece preserves their utility. Similar to their function in recording studios and night clubs, these panels effectively “challenge fixed ideas regarding painting as they have a direct sonic effect on the spaces they occupy.”6 Inside the context of an art gallery, the panels alter the quietness and aseptic quality that the white cube embodies. Mindful of how the painting absorbs and diffuses the ambient sounds of its surroundings, it becomes impossible to discern any difference between acoustical quiet of the white cube and the figurative silence from which the painting emerges, a silence produced in part by historical erasures of the Black avant-garde in the canons of modern art.7 Jones invites us to lend an ear to the unheard that resonates in and beyond the white cube. Hers is an appeal to what many cannot or refuse to hear and that can only be gleaned from the sensation of standing in a hollow and climate controlled room. It is the drone that passes through the packed bodies at yet another gallery opening and intermixes with the scent of spilt wine that promises a reprieve from your social anxiety. Fractured Crescendo, Rest asks us to listen and consider how one might access these unheard resonances by way of a certain attunement.

Let us linger in the gap. Strips of pigment applied to the inner-edges of Fractured Crescendo, Rest create a glow of color that amplifies the painting’s effect on the space it occupies. The diffuseness of the glow serves as a visual corollary to the work that the sound absorbing panels do and registers a domain in the underside of this operation.8 A hot red glow gives way to a grey shadow that then fades into the gallery wall like a subharmonic vibration beneath the painting’s sharp surface. Here, undertone strains against hard-edge’s constraint by blurring sharp lines, accentuating a thickness that troubles the opposition of flatness and depth, and locating a dynamic color field that lurks beneath monochromatic expanses. But the glow’s concentration inside the gap also suggests that undertone is the byproduct of hard-edge or, at the very least, a sympathetic resonance engendered by the parting and proximity of the two panels. When the pink band jumps the gap some of the intensity seems to spill over into the white box and dissipates into a sound that is unheard but heavy. To be sure, Jones’s notion of “listening as a conceptual practice” verges on a mode of thinking-with-art-objects that is filled with risk and uncertainty as it strives to create new concepts that touch the unthought.

Nijah Cunningham is an assistant professor of English at Hunter College, CUNY. His teaching and research focus on African American and African Diaspora Literatures and Culture. Currently, he is completing a book project that reconsiders the material legacy of black radicalism and anticolonial politics. He is also a member of the Small Axe Project.