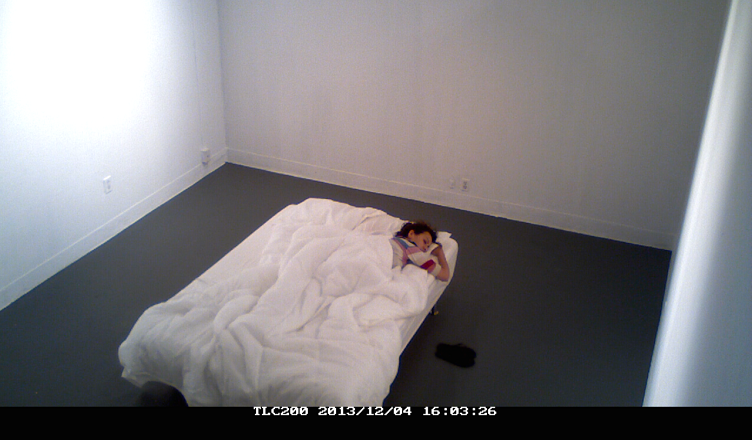 I SEE YOU, 2013, Noor Abed
Still from a week-long performance (8 hours/ day). Artist performing the act of sleeping at the school’s gallery working hours.

Noor Abed and Anthea Behm are both practicing artists who were born in Palestine and Australia, respectively, and came to the U.S. for their MFA degrees. Since completion, they have each participated in a variety of art-study programs. Behm currently teaches art in both New York and Gainesville, Florida and Abed is currently based between Alexandria and Ramallah, where she is at work on a feature-length film.

This conversation between them started over dinner in the fall of 2018. In retrospect, neither of us could remember how we began discussing questions about identity politics and the arts—perhaps a testament to how pervasive these themes are in the arts today. Avi Alpert (who was also at the dinner) asked us if we’d like to continue the conversation for this forum.

Anthea Behm: Noor, I was so interested hearing about your experience of identity politics during grad school critiques, and thought that it might be a good place to start.

Noor Abed: When I moved from Palestine to Los Angeles for higher education, I was shocked by how much identity was foregrounded in how people would discuss my work. Every work I made—regardless of the content or form—was interpreted as coming from my identity. I struggled with the immediate frame I was given as an Arab Brown-skin Woman as they addressed me. We might eventually discuss other elements of my work, but it would always go back into this brown skin Arab woman discussion as a starting point.

AB: This was so interesting to me, particularly because I had just come from teaching in a context where some students wanted their work discussed through identity (primarily race and gender), and others did not. In the case where students wanted their work discussed through identity, some expressed concern that their work was not being represented if the critique veered from this framework. Often, and more to my surprise, they were resistant to conversations about form. And in the other case (more like yours), students had a mirrored negative response if identity came into the conversation at all. As a teacher I felt sometimes at an impasse, where I wanted to both respect these positions and do my job of pushing students into new articulations and expressions.

NA: I can appreciate your role as a teacher needing to balance these concerns. Ultimately, for me, what I experienced in my MFA in a US university was the direction of turning people back to themselves, rather than turning them outward toward a broader vision of the socio-political structures they share with others. It was interesting to see all the thesis shows of my class ending up being about each one’s own individual identity that often failed to touch a broader context. The critiques, therefore, failed to address non-identity terms and concepts of communality.

AB: That brings up a few points for me. First, I think that ties in directly to the skepticism about discussing form. My concern was that form wasn’t being understood as socially produced, but rather something that was autonomous from the content it was bringing forth. I question whether this is an (almost unconscious) inheritance from capital M-Modernism, and if so, what that means for how we develop curricula. I have also been thinking about what modes of critique are necessary to support students who are making work for audiences other than those who are present in the class. In other words, how should US art programs respond to increasing enrollment from international students as we navigate these issues. Whether international artists stay in the US, or return to their home countries, how does this contribute to a hegemonic elitism within the arts?

Finally, more directly on what you were saying about connecting identity and concepts of communality—during critiques, the question of class was largely absent from these conversations. And this is such an important axis of identity when you have different students coming from different economic privileges and educational backgrounds. I thought Haider’s text provided some really interesting insight about this point, especially about the weaponization of knowledge. I’ve seen faculty—and students—talk down to others who don’t know as much as them, whether it’s about identity politics, critical theory, history, etc.  I may even do this unconsciously myself sometimes. This neglects questions of access to education, and also the value (or lack thereof) that we place on forms of knowledge learnt outside of academia.

NA: This is so important—the question of capital and privatisation in educational institutions in the US—as privileged ones, and who can access them. There are other forms of pedagogy, ranging from auto-didacticism and those who learn from reflecting on their experience to communally-based knowledges. But those insights are not always what comes across in these classroom discussions. When I think of any critical or political discussion I had on campus, I can’t help but to think of how much it was detached socially from the rest of the country, even when the topics or ideas were the same. What does a critical discussion on an elite level mean? Again, “elite,” for me, represents most of institutions of higher education in the US. I think this can lead to distortions. For example, “What shade of Brown are you?” was a serious question that I sincerely laughed about when I was asked during my first few weeks on campus. The questioner seemed to think my answer to this would define me and my work. I have never imagined before that my existence and social identity can be shrunk so easily into a shade of a colour. It’s the reduction that so worries me.

AB: On the question of elitism and detachment, I’ve seen this a lot in my movements around the US over the years for teaching and residencies. As much as we all claim to hate it, there is an intensive geographic centrism (largely towards LA and NYC) that encourages this disconnection. So much of the anger in these coastal cities is directed to other parts of the country, but people aren’t willing to go and work there. Several years ago, I moved to Gainesville, a university town in Florida, for a teaching position and now I understand why—it’s like you disappear from the artworld when you’re away from the cities for some time. But, politically-speaking, I think some of the most important work I’ve done has been there, especially with undergraduates who were born and raised in the state. Here I am actually engaging with people whose politics we often discuss abstractly when in NYC. Providing access to education outside of the centers is important but not valued. There are many unrecognized instructors, artists, and students in “red states,” doing difficult work to dismantle racist foundations on personal through to institutional levels in the south. Of course there’s racism in the centers, but in these places there are other contexts, forums, and institutions beyond your own classroom that helps to facilitate work being done in the university. If we really are invested in access and education this work outside the centers needs to become more valued.

NA: And valued in the name of making connections and alliances and thinking about communal forms of engagement. Recognising identity in the way it’s often talked about now (and critiqued in Haider) is, for me, an empty gesture of recognition that results in reinforcing a classic image of politics as a war of competing identity groups. It is necessary to acknowledge the shift in identity politics from being social—large classes of people—seeking to address major historical gaps, shifting nowadays into—politics of the self—that is increasingly narrow. Expanding into US geographies, expanding into international geographies, the question of identity is not just, “what is yours?” but also, “what is all of ours?”

One more thing—I believe rethinking Center/ Periphery in education is a key to rethink productive diversity and possibilities of how we can critically intervene in the world. Since education can’t be indifferent to the reproduction of dominant ideologies, it is important to develop—through education—a concept of “resistance.” One that is not restricted to the binary mode of action and reaction towards mechanisms of control, but one that is concerned with what we become normalized with in our daily struggle—on a structural and social level.

AB: And the complexities of what that normalization looks like, and how it permeates our worlds. Not only within academic institutions, but also in the world from systemic oppression through to the way we treat each other on a daily basis.