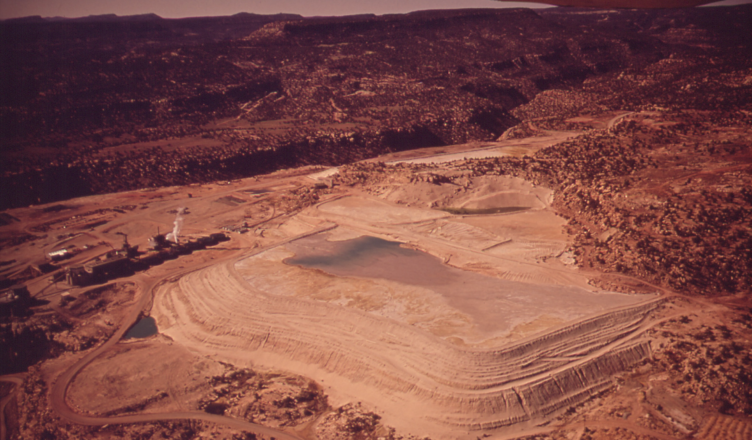 A few years ago, I unknowingly drove through southwestern Colorado’s uranium mining belt. My friend and I had been camping near Telluride for a few days before continuing west to Utah. As the five hour drive passed, we remarked on the vastness of the landscape, the dry desert shrubs, the tall sedimented rock cliffs that rose up outside our windows, the highway so easily swallowed up by the landscape, and the evocatively named towns we saw as we traced our route on the map—Nucla, Naturita, Bedrock, Paradox… We stopped for a break in Paradox as we neared the Utah border. It was quiet and dusty, and the road we’d turned onto had only a few buildings. I remember standing outside of one in particular, struck by its rectangular false-fronted facade set against the golden hour desert sky. Large letters painted in green and white affixed to the peeling whitewashed cladding spelled out the name of the town. Paradox. No one seemed to be around. A dog barked in the distance. We felt somehow like we were time traveling or trespassing, or both. We got back in the car and wondered where we’d just been, but never thought to find out.

Six years later, sitting at my desk in Connecticut virtually flipping through the People’s Atlas of Nuclear Colorado, a digital public humanities project edited by Sarah Kanouse and Shiloh Krupar, I found the answer. The Atlas documents locations in Colorado that have been involved in nuclear industry: uranium mines and mills, plutonium processing sites, nuclear weapons plants and testing areas, active nuclear missile silos, military bases, and waste storage facilities. From the homepage of the website, I was offered a timeline-like table of contents to click through. The points on the timeline were labeled variously, “The Earth/Whose Earth,” “Extraction/Overburden,” “Refining/Exposure,” “Production/Friction,” “Deployment/Mobilization,” and “Waste/Legacies.” As I read through each section, it was like falling into a sprawling interconnected web. Arrows gently prodded me along from one page to the next, hyperlinks from essays in one path catapulted me forward to another. In what felt like a never-ending spooling of information that reflected how the editors characterize the nuclear condition (a “web of complexity, controversy, and connection”1), I stumbled upon Paradox again.

In “The Earth/Whose Earth” section, I read about the geology of the Colorado plateau, the deeply embedded layers of uranium that prompted a rush for land and resource extraction in the 20th century, as the U.S. government engineered the seizure and mining of Indigenous land in the name of profit and national defense. The Uravan Mineral Belt, a long and narrow mineral-rich valley filled with carnotite ore deposits (from which radium, vanadium and uranium could be extracted), was a central mining site in the southwestern corner of Colorado. Uranium from this stretch of land went toward war defense efforts and the production of nuclear weapons and fuel. During World War II a uranium mining boom gave rise to communities called “yellowcake towns.” These towns supported the extraction of uranium from ore via a milling process that creates “yellowcake”—uranium oxide which in its solid, mixed form, is reminiscent of yellow cake mix, and central to the production of enriched uranium for fuel.2 Paradox was one such yellowcake town.3 Along with neighboring towns like Nucla, Naturita, and Uravan, the yellowcake towns of the Uravan Mineral Belt produced upwards of 50 million pounds of uranium. Yellowcake from the town of Uravan fueled the atomic bombs that decimated Hiroshima and Nagasaki.4 The boom-and-bust cycle of uranium mining, which after the original Cold War rush, fluctuated in time with public perception of nuclear power, has contributed to layers of radioactive pollution in the region. Piles of uranium tailings, a radioactive waste byproduct of the milling process, contaminated rivers, soil, and air.

The spread of information here is representative of the Atlas’s thorough, investigative, and wide-ranging coverage of Colorado’s nuclear places. The project demonstrates convincingly that Colorado is a microcosm of the larger U.S. nuclear industrial complex, demonstrating how the impacts of nuclear production have been pervasive, reaching “into the land, institutions, bodies, laboratories, civic practices, and imaginations.”5 And as the editors write in their introduction to the site, the networked and complex legacies of nuclear geographies are all too often hidden from easy view. For instance, the basic but striking fact that rocks from Colorado fed the opening violence of the atomic age is not readily apparent when driving through the towns of the Uravan Mineral Belt, nor is it taught in most U.S. history courses.

By providing a place where an archive of these nuclear connections can be collected and defined, the Atlas is radical in the simple act of its documentation and inventory, but also in the multiplicity of voices that are included, as well as the dynamic and interactive nature of its digital display. Contributions by critical geographers, scientists, historians, public history practitioners, community members from impacted places, artists, and activists cover topics such as land sovereignty, the rights of a river, cold war culture, tourism at nuclear sites, the environmental injustices of uranium mining, personal narratives of nuclear Colorado, radioactive exposure in downwind/downriver communities, human radiation testing, the work of anti-nuclear activists, military to wildlife conversions of toxic land, superfund sites, and art that interprets and depicts these varied nuclear geographies and experiences. These contributions are organized around pathways that follow a conceptual framework based on the nuclear fuel cycle—the mining of raw materials, the refinement and production of these materials into weapons or fuel, and waste storage and remediation—but this tidy closed loop, a commonplace representation of nuclear production, the Atlas argues, is not the whole story. As such, each pathway is paired with a “shadow side” and the content here complicates the promise of nuclear energy, emphasizing the lingering dangers and violences of nuclear production. “Where there is mining and milling,” the introduction explains, “there is overburden and exposure; where there is production there is friction; where there are celebrated accomplishments, there is undeniable waste with vast environmental health impacts.”6

The shadow side is what my friend and I couldn’t see on our brief pass through Paradox, but perhaps it is what we felt, in the eeriness, the unnamable uncanniness in the atmosphere. The shadow side is what Abbey Hepner captures so poignantly in her photography series Uravan (2020), featured in the Atlas. By 1986, after nearly a decade of mining activities, the land beneath the town of Uravan was saturated with radiation, and the Environmental Protection Agency declared the area a superfund site. The EPA relocated current residents and “Uravan was shredded, burned, and buried,”7 leaving behind a deeply contaminated landscape empty of buildings and people. In Uravan Hepner layers images of present-day Uravan with laser-engravings of the historical buildings and roads, rendering these places atop the landscape in a collage-like fashion. The style of the engraved architectural additions—flattened and simple depictions of industrial buildings, small one-story homes, long pipes and shafts—compared to the background landscape creates noticeable visual contrast. The town seems to barely sit on the landscape. The buildings have a ghostly and temporary presence, like they could be easily picked up and rearranged, or pushed over as if they were cardboard cutouts. Hepner’s images, along with the other art and creative writing included in the Atlas captures what is hard to put into words and allows visitors to “locate the nuclear in lived, material, and sensory experience.”8

The contributions compiled in the Atlas, and the way they reverberate against each other—science and art and maps and stories—in a tangled, yet structured way, provides a model for the fraught work of documenting toxicity and the impacts of the nuclear industry on people and places. It is a response to Joseph Masco’s observation of the “near erasure of the nuclear economy from public view, and the banalization of nuclear weapons in everyday American life.”9 In its insistence on highlighting the mundane yet wide-reaching afterlives of the nuclear economy of Colorado, the Atlas counters this erasure. It joins recent, similar, work in the nuclear humanities such as Jessica Hurley’s Infrastructures of Apocalypse: American Literature and the Nuclear Complex, or John O’Brian and Claudette Lauzon’s edited volume, Through Post-Atomic Eyes, which track the materiality and mundanity of the nuclear condition through attention to cultural production. The Atlas adds to this scholarship in its ability to demonstrate the vast network of nuclear geographies that spiral outward from Colorado, all the while retaining the specificity of place that so powerfully demonstrates the everyday legacies, memories, and tragedies of the nuclear-industrial complex. This multiplicity of sources and voices, and the open and unfinished nature of the Atlas—it will continually be updated and changed—makes for a crucial public history resource.

Presently, it also provides timely contextualization to contemporary debates around nuclear power and domestic uranium mining that have been reignited by Russia’s invasion of Ukraine, as well as the potential radioactive tinderbox that has been Russia’s occupation of the Zaporizhzhia nuclear power plant. Visitors to the homepage of the People’s Atlas of Nuclear Colorado are reminded that these current events do not stand apart from the history of the U.S. nuclear complex and global nuclear geographies. A pop-up addendum to the Atlas’s homepage condemns the Russian occupation of Zaporizhzhia and the earlier invasion of the Chernobyl exclusion zone—both Soviet-era nuclear sites. The threat of nuclear conflict that has been reignited by Vladimir Putin’s war-making, the editors also argue, has “overshadowed the ways that Cold War legacies have already been weaponized. Zaporizhzhia and Chernobyl underscore how there exists no bright line between military and civilian applications of nuclear technology.” No bright line. Ukraine might seem very far away from Colorado, but the People’s Atlas provides context to demonstrate that when it comes to nuclear places; dividing lines and borders are porous and overlapping, and particles of wind-borne radiation have no country.

Charlotte Hecht is a PhD candidate in American Studies at Yale University. Her interdisciplinary work broadly focuses on visual culture, the built environment, and landscape. Her dissertation is a cultural history of nuclear landscapes in the United States.