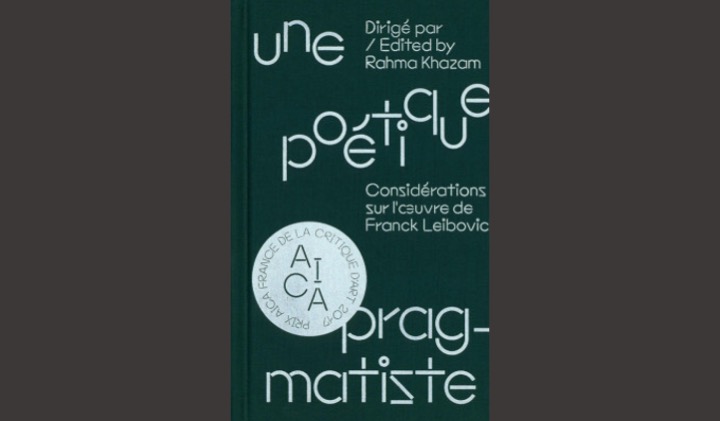 Une poétique pragmatiste: considerations sur l’œuvre de Franck Leibovici / A pragmatic poetics: reflections on the work of Franck Leibovici is a bilingual book edited by Rahma Khazam, a British art critic and academic living in Paris, France. The silvery badge incorporated in the cover design indicates that the author of the book is the 2017 winner of the French award of the International Association of Art Critics (AICA). As such the book carries a prestigious status to begin with – it is the fifth in the series of books written or edited by the winners of these awards. All the contributions to the series are connected to PechaKucha presentations the winning art critics have given on their chosen artists as part of the competition. Rahma Khazam gave her presentation on the pragmatic and participatory work of the French artist Franck Leibovici (born 1975). As an artist Leibovici is known, for example, for his poetic analysis or remake of the trial transcripts relating to a complex court case at the International Criminal Court of the Hague in which two men were charged with genocide, crimes against humanity, and war crimes during an attack on the Congolese village of Bogoro in 2003, as part of the still ongoing civil war. Having exhibited at such major venues as Documenta, Kassel, Centre Pompidou and Musée National d’Art Moderne, Paris, Tate Modern, London, and Moderna Museet, Stockholm, Leibovici has a firmly established career in contemporary art.

Une poétique pragmatiste / A Pragmatic Poetics offers multiple analytical, theoretical, and also material angles to the work of Leibovici, and as such provides a multifaceted introduction to his internationally acclaimed œuvre. While by size the book resembles a regular novel or book of theory perhaps more than a fully-fledged coffee table type of art book, its overall appearance, nevertheless, makes it a unique material object – thoughtfully and playfully designed. The deep forest green cover fabric, the poignant, unusually round typography printed in matt silver, and the fore edge that rhythmically reveals the contents of the book in white and green attract attention, and indeed call for ‘judging the book by its cover.’ This review therefore does not only focus on the textual contents of the book, but also offers remarks on how this particular book was designed to represent the work of Franck Leibovici.

The book revolves around four major reflections on Leibovici’s way of doing art, written by a small selection of esteemed art critics and scholars, and including an interview with the artist. These analytic sections appear as white chunks in between the green sections which are annexes that offer ample visual documentation of Leibovici’s art projects – including text excerpts and diagrams central to his practice.

The first of the reflections is Rahma Khazam’s introduction to the book. Khazam begins by embracing the fact that Leibovici’s projects emerge collaboratively across ‘heterogenous disciplines and materials’ (17) encompassing poetry, social sciences, anthropology, law and arts.   While introducing the book and its different contributions, Khazam’s leading theme is to give an overview of how Leibovici conducts his art, and also to relate his techniques to the conceptual art and institutional critique of the 1960s and 1970s. Khazam summarises Leibovici’s take as pragmatically-oriented, an emphatically processual form of inquiry that presents its audience with new and unexpected reformulations of official reports of such events as 9/11. The text body is written bilingually, with every second page in English – which gives the two languages a pleasantly equal and parallel position, even though the French version understandably always comes first.

David Zerbib’s contribution focuses on how Leibovici’s art ‘transformats’ reality, with a focus on how he uses documentary information. The concept and practice of transformatting rather than just representing, or transforming, reality, places emphasis on the creative potential of the format; that is, its poetic dimension. Zerbib’s examples include 9+11, which reduced the official 9/11 commission report to 20% of its original length, not by changing the contents of the document but by way of formatting, breaking its linearity – hence, opening it up for ‘other interpretations and uses’ (60). Zerbib writes: ‘What is performed here is not, strictly speaking, a citation … Neither is it a collage’ but rather ‘a poetic document’ (60). Here poetic refers to the aesthetic and experiential qualities of the document whilst it never excludes the soci(ologic)al dimension: ‘The nature of information in question is inseparable from the form of the experience and action that the document brings to life in the work’ (61). The interest in experience underscores the crucial role of the audience and the public in his œuvre. For Leibovici, it is important that people involved in the poetic ‘re-describing’ processes are not professionals only, as is the case of mini opera pour non musiciens. This art project transposes the former US Secretary of State Colin Powell’s PowerPoint slides about Iraq and weapons of mass destruction to a notational format sung by a choir of non-professionals. Zerbib’s essay is the highlight of the book; in a very concise manner it demonstrates how Leibovici’s art works beyond documentary ‘utility’ and representation of reality reflecting the timely theorizations of the more-than-representational. In the case of Zerbib’s essay, the French version is typeset in a roomy layout of one column with footnotes conveniently placed at the bottom of each page, while the English translation comes with two columns, and endnotes – which might be a page-saving gesture. On the other hand, carefully considered and varyied typesetting as part of formatting is integral to Leibovici’s art projects too.

Yaël Kreplak’s contribution titled ‘Once it is out, it is anybody’s: Quelques remarques sur les méthodes de Franck Leibovici’ highlights what was already implied in Zerbib’s essay: Leibovici is as much an artist as a theoretician of art. In other words, Leibovici’s practice is at once theoretical, poetic and artistic. According to Kreplak, Leibovici’s art projects are not merely ‘commentaries on something, but actions with’ (121). Which, as in Zerbib’s essay, relates to the critique of representationalism. Kreplak also has firsthand experience of this – she was involved in Leibovici’s project des récits ordinaires exhibited at Villa Arson, Nice, in 2014. Despite its main title in English, Kreplak’s essay is the only critical contribution in the book that does not appear in English, which is a pity in terms of accessibility.

The fourth and final reflection is an interview by Virginie Bobin titled ‘D’autres manières de faire’ / ‘Other ways of proceeding’, and it is here that the reader encounters the artist’s understanding of and reflections on his practice at length. The interview focuses on the collaborative work bogoro, mentioned earlier in this review, and on its follow-up work muzungu that not only offered court transcripts for the audience to read, but was in itself a tool that allowed the audience ‘to manipulate the material’ as the interviewer puts it (174). However, according to Leibovici, the function of muzungu should not be reduced to an ‘aestheticising’ tool only (176). First and foremost, muzungu and its wall of printed A4 images offered the audience a chance to access a variety of court material – photos, diagrams, transcripts, and so on, some of which were highlighted with tags or colour-coded. With the help of magnets, audience members could rearrange the documents either following the tags or colours or their own logic, and also try out the roles of judge and exhibition curator. The interview gives a concrete picture of how the artist practices his art but proceeds beyond that too: it ends with a notion of ‘investigative art’ which offers ‘latent forms of knowledge’ to be re-activated and explored. Regarding the layout of the interview, notably, Leibovici’s replies are all typeset without capitals in lowercase only – this follows and respects his chosen form of expression. Also in lowercase are the captions and the list of Leibovici’s selected works.

In between and after the contributions of Zerbib, Kreplak and Bobin there are four annexes, three of which offer extensive documentation and images relating to Leibovici’s body of work. In fact, the annexes form the bulk of the book. While this ratio might be unexpected, it is certainly well-chosen. After all, this is a book on the work of Leibovici. Therefore, the selection of images and other documents must be acknowledged as an important part of the editorial work. All the annexes are thoughtfully connected to the reflections preceding them in that they document the art projects analysed in these reflections. The fourth annex comprises the authors’ biographies and lists a selection of Leibovici’s works.

The book is well documented in a notably clear manner: at the end of the book, all the author and publication information is collected and condensed onto two pages (222–23), where the French AICA organization is credited and listed alongside translators, authors, graphic designers, the material details of paper, fonts, and printer. This careful mode of documentation reflects the ethically charged work of Franck Leibovici, that is so strongly based on the pragmatics and potentialities of collaboration.

Katve-Kaisa Kontturi is Professor in Art History (acting), University of Turku, Finland, and Honorary Fellow, Victorian Collage of the Arts, University of Melbourne.