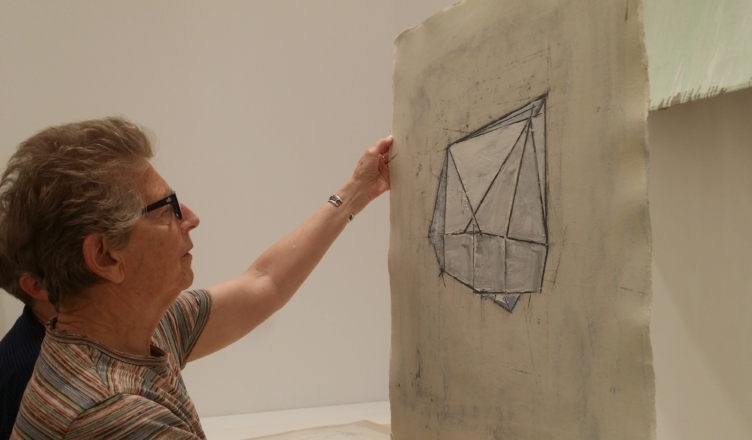 A Question of Emphasis: Louise Fishman Drawing, curated by Amy L. Powell at the Krannert Art Museum, is the first career-spanning exhibition to focus on Fishman’s works on paper. While Louise Fishman is most associated with her monumental abstract expressionist canvases, this exhibition and its attendant catalogue take her drawing practice and smaller works on paper seriously in their own right. The work encompasses a wide range of mediums (acrylic, watercolor, oil, wax, ink, charcoal, even hair) deployed across several experimental yet intentional series. Some have been widely exhibited, while a majority of works in the show are from the artist’s archive and have rarely been displayed or discussed.

A pioneer of queer abstraction before we had the words for the concept and practice, Louise Fishman’s fraught negotiations with, and challenges to, the male-dominated history of abstract painting are generally considered in relation to her lesbian feminist and Jewish identities, activist politics, and communities in New York City to which she belonged.1 Furthering a queer and feminist approach to Fishman’s work, this catalogue frames the exhibition both in light, and in excess, of the artist’s biography. The contributors achieve a generative balance as they consider the artist’s investments that are at once formal-material, social-political, private and personal. Joining conversations about queer abstraction, the catalogue addresses questions about abstract art as it is made and viewed from queer feminist perspectives—what do those perspectives reveal in relation to formal and material matters? How firmly, and to what end, do we situate such abstract work in the context of its production?2 While Fishman’s work cannot be extricated from her social investments, especially because she dedicated so many works to the women she loved and admired, this catalogue also demonstrates how her work exceeds itself. 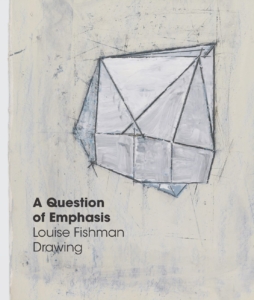 Curator Amy Powell’s introduction frames Louise Fishman’s work in terms of process. Resisting notions of drawing as transparent reflections of the artist’s psyche or preliminary studies for complete paintings, Powell takes Fishman’s drawing seriously for what queer theorists call “worldmaking”—a term coined by Lauren Berlant and Michael Warner to describe queer utopian space-making practices that create openings, paths, and horizons while refusing to settle according to definable borders or trajectories.3 In Powell’s account, Fishman’s stapling, scraping, imprinting, dragging, unfurling processes that render the material traces of contact in her drawings (particularly her unfolding leporello books) perform as ephemeral evidence of relational intimacies within lesbian feminist communities, lovers, and artists such as Agnes Martin and Eva Hesse. Powell’s formal analysis in relation to the facts of Fishman’s life refuse any easy correspondence between form and context that accounts of abstraction often fall into. Rather than taking Fishman’s physical marks as either transcendent gestures or symbolic content corresponding with the artist’s life, Powell describes an encounter with the unrepresentable. These queer, feminist, Jewish, working class, disabled ways of being that are left out of history’s pictures also tend to survive by exceeding or producing some unaccounted-for remainder that cannot be resolved—this helps to explain why abstraction is such a useful minoritarian strategy.

In the second essay, “Queer Expressivity; or, the Art of How to Do It with Louise Fishman,” Jill H. Casid joins queer with expressivity by building on the foundational queer theories of Judith Butler and Eve Sedgwick, where queer operates as “performative” or an active force that does things in the world, along with Casid’s work on the “deformative,” that devastating other side to the performative that stays active in the midst of our undoing by working with what alters and erodes us.4 This essay recons directly with the irreconcilable tension between the idea of expressive abstraction as a direct representation of the artist’s life, and the idea of an expression that entirely exceeds the singular emotional experience of the artist especially when that artist is positioned as “minor.” As Casid points out, it has never been a problem to claim the abstract expressionism of white cisgender men for the “universal,” while the personal expressions of women are abjected—cast off or pathologized as mere feminine emotional excess—and thus excluded from master status. But this problem also generates possibilities for a deformative praxis. Charting thirteen key aspects of Fishman’s queer expressivity in the numbered format of a manifesto, each beginning with “Queer expressivity risks…”, Casid demonstrates what this work can do when we are open to being done by it. It wrestles palpably with identifications and relations that might un-do; the power of Fishman’s exes and lovers, the genealogy of abstract expressionist “mastery” with which she is entwined, the losses wrought by global necropolitical regimes and the everyday ways we seem to miss each other. It reckons with (again) the unrepresentable—excesses of feeling, affect, romance, rage deployed as their own transportative mediums. That risk is central to queer expressivity suggests its dangerous possibility, and Casid makes the creative-political praxis of this artist palpable in its courageous vulnerability.

In “Abstracting Gender, Figuring Drag,” Catherine Lord focuses on a painting that shores up that persistent tension between abstraction and figuration, between the past and present of queer art cultures: Fishman’s Portrait of Myself as a Man. Painted in 1983, this is a deeply messy portrait, a face and neck rendered using a leftover surplus of various colors that don’t quite work, a thickness built up and scraped away. Lord contextualizes this persistent working and reworking in light of the fact that this “Man” never circulated publicly within conversations about performative gender, queer theory, or trans scholarship. The discourse and critical lexicon we might use now to describe what this work does, or the figure that it portrays, had yet to be theorized and formulated when Fishman painted it, and the work was not shown until one 2012 exhibition. Taking this ostensible “minor” work seriously in light of Fishman’s many innovations in abstraction, Lord understands this as a working-through of gender via processes of abstraction. Lord positions the work very firmly in its context, a private context. Yet, the essay also demonstrates how this work continues working on us, beyond the decades it remained unseen outside of Fishman’s studio, because it still vexes the identity categories that would seem easily affixed to a self-portrait.  Excessive in more than one sense, this portrait makes gender a matter of speculation and failure, an “impossible project” in Lord’s description, and again, posits abstraction as a reckoning with that which is unrepresentable. We still do not have many of the tools to make legible our gender and sexual revolts, and Fishman’s (gender)queer abstractions have shown that such languages or looks may not solidify in representational terms—instead, we have a remainder of gestures.

Ulrike Müller’s interview with Louise Fishman completes the catalogue with a conversation between queer abstractionists of different generations. The two artists discuss Fishman’s experiments with materials and forms in relation to her dialogues with women—other artists, writers, lovers—and with the world. Müller captures the tension in Fishman’s work between the flow of paint and the ordered “rule” of the grids and structures that can’t contain her “misbehaving” marks.While the works in this exhibition are often boldly gestural, those expressive marks always seem to vibrate in tension with their supports and exceed the lines of Fishman’s drawn geometric configurations. Taken as a whole, the catalogue encourages one to think of Fishman’s grids as things to be alive inside. What would normally impose a strict limiting order becomes a configuration that sustains Fishman’s intimate gestures, forming the architectures for the dialogues and exchanges that would sustain her. Positioned on the fragile and porous substrates of paper, Fishman’s grids suggest her own movement in and against and beyond those structures of historical erasure that tried to confine her.5

Through the dialogues offered by its catalogue, A Question of Emphasis demonstrates what a university museum can accomplish as a curatorial research incubator and catalyst for the kinds of art worlds we can imagine into being with deep curatorial care. Louise Fishman died just weeks before this exhibition opened. That she received a copy of this catalogue just prior to her death attests to the crucial importance of taking the work of marginalized and oppressed artists seriously while they are still alive to see it. As this catalogue suggests: here was a life that we cannot fully account for, even in our most careful analysis, but that we can still glimpse and feel in the immediacy of Fishman’s activating, and sometimes devastating, gestures.

A Question of Emphasis: Louise Fishman Drawing is on view at the Krannert Art Museum until February 26, 2022.

Lex Morgan Lancaster is a scholar, professor, and curator who focuses on queer, feminist, trans, and anti-racist visual and theoretical contributions to the field of contemporary art. Their published essays and forthcoming book from Duke University Press, Dragging Away: Queer Abstraction in Contemporary Art (Fall 2022), investigate the phenomenon of queer abstraction, forging a queer formalist approach to social and political deployments of abstraction in contemporary art. Lancaster is Assistant Professor of Art History and Gallery Director at the University of South Carolina-Upstate.