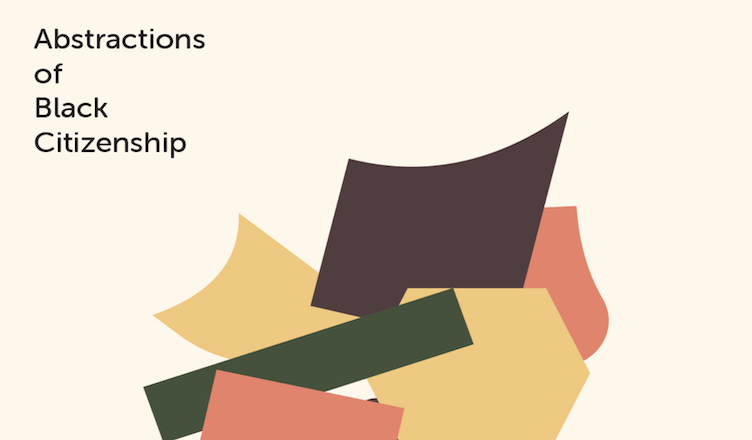 This series for “Thinking With” centers around the online exhibition Abstractions of Black Citizenship: African American Art from Saint Louis curated by Jasmine Jamillah Mahmoud and produced by Molly Mac. In a series of short essays and interviews, Mahmoud, Mac and student members of the exhibition team will reflect on how to do the work of curating, educating and art making amidst the COVID-19 crisis and ongoing racist regimes. Originally designed for the space of the Hedreen Gallery at the Lee Center for the Arts, Seattle University, the exhibit went virtual in May 2020.

Thanks to Terrance Wooten, faculty at University of California at Santa Barbara, Abstractions of Black Citizenship opened online on Thursday, February 11, 2021 via the UCSB Multicultural Center. This series will be published over the second online run of the exhibition during February-March 2021, and as you read the essays and conversations, we encourage you to also view the online exhibition. Click here to view the exhibition.

On Thursday February 25, some fifty folks gathered online for a public conversation about Black art.  Hosted by UCSB’s Multicultural Center and UCSB Professor Terrance Wooten, this event made space to talk about the virtual remounting of Abstractions of Black Citizenship. Three exhibition artists—Dominic Chambers, Jen Everett, and Katherine Simóne Reynolds—keynoted  in dialogue with Wooten as convener, as well as UCSB Professor Stephanie Batiste who offered a beautiful introduction on the power of Black art. In my role as moderator, I asked the artists three questions: 1) how their work dialogues with the concept of abstraction (especially in light of a recent New York Times article about Black abstract artists), 2) how their work relates to place including St. Louis, and 3) what they are working on now and what excites them about their work. Beyond these questions, the engagement most memorably moved to a dynamic, deeply thoughtful conversation among the artists about how they are coping, managing, and creating—especially over the last year. It was nice to hear their voices.

Below I write about recent work by each exhibition artist.

In last week’s UCSB-hosted conversation, Katherine Simóne Reynolds poignantly talked about the evolution of her artistic ideas. In Abstractions, Reynolds’s work included the Mending Keloid sculpture series, inspired by beauty store edge growth creams, the keloid and hyperpigmented skin growth on Black skin, and the idea of the St. Louis region as (over)healing. As an evolution to these ideas, recently she’s been thinking about “keloidial” states, or states of “hyper-healing.” In addition to her artistry, Reynolds is a boundary-breaking curator. In particular, she is the 2021 In Practice Curatorial Fellow at SculptureCenter in Long Island City (Queens), NY. There, she has curated In Practice: You May Go, But This Will Bring You Back, a group exhibition that runs through August 2021. She is also Curator at St. Louis’s The Luminary. Last year in 2020, I became mesmerized looking at Reynolds’s new photographic work: Ask Her How She is Doing. Engage more of her work here.

De Nichols continues her path breaking work as a designer-activist. After her 2020 Loeb Fellow at the Harvard Graduate School of Design, Nichols has continued to keynote national events on art, activism, protest, and Black museums. She recently joined Google’s YouTube design team as a Senior User Experience (UX) Research lead for product inclusion. In addition, she is currently curating In the City: Memories of Black Presence, an exhibit featuring six Black St. Louis artists capturing black identity, loss, and culture for The Griot Museum of Black History and Culture in partnership with Harvard’s Commonwealth Project. In September 2021, her children’s book The Art of Protest—which centers protest art and political movements—will be published by Bonnier UK and Candlewick. (Preorder now!) Engage her work on her website and Instagram.

At last week’s UCSB virtual Conversations event, Jen Everett offered ruminative, introspective thoughts about form and place. She framed her approach to abstractions through “sensibility.” When I asked about how place engaged her work, Everett talked about originally being from the Detroit metro area, and connecting Detroit and St. Louis as “cousins”—both cities with traces of the South and of the Black American experience. She also talked about how non-coastal cities (including St. Louis) are under-valued in the artworld, which nevertheless gives artists placed therein the freedom to experiment, and to do so under the radar.  Engage more of her work at her website and Instagram.

Mesmerizing, deeply personal sculptural work animates much of Damon Davis’s prolific artmaking over the last few years. Marking the intensity of 2020, Davis’s Altars is comprised of three augmented reality sculptures, framed each through a feeling—“grief,” “joy,” and “protection.” In Cracks, Davis composed textured concrete busts, fractured with elements including roots and gemstones. The post-disciplinary artist exceeds genre, currently writing and composing Ligeia Mare, a “science fiction electronic fantasy opera.” He is also completing Chain of Rocks, “the first-ever fully stop-motion animated feature-length documentary film… about innocence, doubt, guilt, accountability, and masculinity.” Davis is currently an artist in residence at the Department of African and African American Studies at Washington University in St. Louis, as well as the virtual artist in residence at the Oakland, CA-based Betti Ono. His next solo exhibition, Darker Gods at The Lake of Dreams, will premiere at Betti Ono in June 2021. Engage his work on his website, and Instagram.

In his “Wash” series, Dominic Chambers paints portraits of Black people—often coupled—in outdoor settings; they sit on grass, stare at rainbows, move amidst flowers, and read books. In this series, green and yellow translucent brush strokes wash over the more figurative subjects of the canvases, as if a translucent curtain blowing in the wind. In last week’s UCSB Conversation, Chambers offered moving thoughts about his realization of the abstracted ways in which urban life is curated for (Black) inhabitants—through forces like redlining and discriminatory housing policies. In 2020, Pittsburgh’s August Wilson African American Cultural Center hosted a solo exhibition of Chambers’s work. Earlier this year, a digital version of his artwork was featured in MARTA Stations in the Atlanta area. He will have a solo exhibition at Luce Gallery in Fall 2011. Follow his work on his website and Instagram, and his collection here.

These artists—Dominic Chambers, Damon Davis, Jen Everett, De Nichols, and Katherine Simóne Reynolds—and their work are foundational to thinking and feeling about abstraction, place, being, and citizenship. I remain so grateful for the opportunity to work with these brilliant artists, and to curate and reflect on Abstractions.

Acknowledgements: It has been an honor to reflect on Abstractions of Black Citizenship: African American Art from Saint Louis. Thank you to the amazing artists Dominic Chambers, Damon Davis, Jen Everett, De Nichols, and Katherine Simóne Reynolds. Thank you to Ken Allan and Alexandra Kingston-Reese for making this series possible and to the Association for the Study of the Arts of the Present for supporting the artists’ work. Thank you to curator, producer, and collaborator Molly Mac, and to the Seattle University curatorial, education, and design team, Anna Iwasaki, Meilani Mandery, Ashley Marshall, Dev McCauley, and Ellen McGivern. Thank you to Terrance Wooten, Professor of Black Studies at UCSB for making space for the 2021 run of the exhibition, and for support from UCSB Professor Stephanie Batiste who opened last week’s Conversations event, as well as from Melissa Walker and Isabella Restrepo at UCSB’s Multicultural Center.

This is one of four essays from Abstractions of Black Citizenship. Read the other posts here:

Jasmine Jamillah Mahmoud is a performance historian who writes about black aesthetics, contemporary performance, feminist/queer of color critique, cultural policy, and urbanism. Her writing appears in Hyperallergic, the Journal of Urban Cultural Studies blog, and The Arts Politic, a magazine she co-founded. She is currently an Assistant Professor in Arts Leadership program at Seattle University.