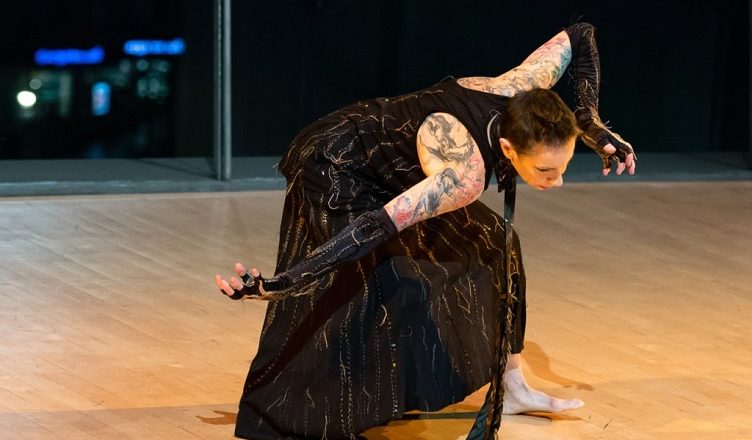 Paula Josa-Jones performing Mammal, from a trilogy of solo dances entitled Of This Body, in 2016. Photograph by Dariel Sneed.

Marla Carlson, Affect, Animals, and Autists: Feeling around the Edges of the Human in Performance. Ann Arbor, MI: University of Michigan Press, 2018.

Affect, Animals, and Autists, by theater and performance scholar Marla Carlson, explores the intersection of three interdisciplinary fields at the forefront of contemporary performance studies: affect studies, animal studies, and disability studies. Though other scholars have touched on the some of these connections (considering issues of affect in relation to human-animal interactions, for instance), no one has proposed the intersection of these three fields as a subject in its own right. Carlson’s decision to do so is a bold one, and it opens significant insights into the performance of otherness and the uneasy category of the human. Autists and non-human animals are not equivalent, of course, but they have historically been associated with each other in such figures as “feral” children or enfants sauvages. This association, Carlson argues, has a logic to it. Autists and animals “reach around the edges of the human to touch one another in an especially productive way, because classification as autist or as animal entails communication that differs from normate human language use” (2).1 Carlson is interested in the boundary zones where non-autistic humans impersonate or perform with autists and animals. These performances challenge the categorical separation of neurotypicality from neurodiversity and the anthropocentric hierarchy that privileges human over non-human animals. By detailing the complex dynamics at work in such performances, Affect, Animals, and Autists makes an important contribution to the posthuman critique of Western humanism.

The key third element in Carlson’s argument is affect, which designates the experiential field in which empathic encounters between autists, animals, and ostensibly normate humans are possible. Affect studies, of course, is a burgeoning field in theater, performance, and literary studies, and it offers models for understanding the dynamic circulations of embodiment and felt experiences. Carlson builds her theoretical framework primarily on Silvan Tomkins’ discussion of the affect system in his seminal three-volume study, Affect, Imagery, Consciousness (1962, 1963, 1991), but she shows equal facility with later theorists who have taken the field in new directions, such as Gilles Deleuze and Félix Guattari. Affect, for Carlson, is the register through which spectators and performers experience their affinities and disaffinities with those they encounter. By pulling in different directions and overcoming the boundaries between self and others, affect destabilizes rigid identity structures. In doing so, it lays the groundwork for empathy, the ability to enter into the feelings and perspectives of someone else. By making difference fundamental to empathy rather than something empathy appropriates and erases, Carlson’s affective analysis replaces singularity with the opportunity for mutuality, encounter, and discovery.

The book’s opening chapter, “Locating the Human in Performance,” elegantly lays out the project’s theoretical backdrop. The remaining chapters analyze a range of contemporary theater, dance, and performance works that navigate the thresholds Carlson takes as her subject.  Chapter Two, “Performing as Animals,” looks at three commercial plays that stage human-animal or animal-animal interactions with humans standing in for animals: the London National Theatre’s production War Horse (2007), Disney’s musical The Lion King (1997), and Peter Shaffer’s play Equus (1973). These plays, Carlson argues, engage awe, tenderness, and a nostalgic longing for bygone ways of life while naturalizing the species hierarchy that sanctions human subjugation of animals. Deke Weaver’s multipart, multimedia performance project The Unreliable Bestiary (2009-13), by contrast, unsettles this hierarchy by fostering affective engagement with human responsibility for issues such as species extinction. Chapter Three, “Performing as Autists,” follows a similar trajectory from mainstream to non-mainstream theater in its consideration of plays that portray autism using neurotypical performers. The three Asperger-family plays it opens with—Simon Stephens’ stage adaptation of Mark Haddon’s novel The Curious Incident of the Dog in the Night-Time (2012), Mike Leigh’s Two Thousand Years (2005), and Annie Baker’s Off-Broadway play Body Awareness (2008)—offer performative versions of the Aspie-geek stereotype. While the neoliberal family paradigm that structures Curious Incident limits its ability to challenge this stereotype and the institutional framework that sustains it, Carlson argues, the latter two plays offer more trenchant critique. Carrying this critique even further, Deanna Jent’s Falling (2011) refuses the sentimentality and “cruel optimism” of the Asperger family play, while Pig Iron Theatre’s Chekhov Lizardbrain and Elevator Repair Service’s The Sound and the Fury (April Seventh, 1928) (both of which premiered in 2008) employ autism tropes “to bring modernist literature into collision with the (un)happy family” (76).

In the next two chapters, Carlson opens her performance analysis to more radical encounters between humans, animals, and autists. Chapter Four, “Performing with Animals,” considers the introduction of live animals in contemporary performance. After discussing the connection between animal death and moral disgust in plays by Sam Shepard, Edward Albee, and Martin McDonagh, Carlson presents the far more disturbing (and ethically problematic) performance work of Otto Muehl and Hermann Nitsch, who had living animals killed in front of the audience. The chapter’s second half explores less affectively fraught engagements between humans and animals. In a cluster of contemporary works about human-pig encounters—Carsten Höller and Rosemarie Trockel’s A House for Pigs and People (1997), Kira O’Reilly’s inthewrongplaceness (2005) and Falling Asleep with a Pig (2009), and Miru Kim’s The Pig that Therefore I Am (2011)—performers and animals dwell in “the zone of indistinction where species blur” (106) and where the lines separating humans from their shared animality are troubled. Further examples of multispecies performance in this chapter include dances by Ann Carlson and equestrian-dancer Paula Josa-Jones that develop out of affective bonds with animals and a respect for their autonomy and difference.

Chapter Five, “Performing with Autists,” dwells on the affective linkages between audiences and performances that include persons perceived to be autistic. Poet, painter, and performer Christopher Knowles, who is often referred to as autistic, is the main figure in this discussion. Focusing on the affective dynamics of wonder, shame, and concern that are occasioned by his work and his presence on stage, Carlson analyzes Knowles’s well-known collaborations with Robert Wilson and his recent solo performance The Sundance Kid is Beautiful (2012-15). This is followed by a discussion of Back to Back Theatre’s Ganesh Versus the Third Reich (2011) and other contemporary performances engaged in autism advocacy and self-advocacy. A fuller discussion of the 2012 Theatre HORA/Jérôme Bel collaboration Disability Theatre would have been a useful addition to this important but brief section.

As Carlson notes in her preface, one of the inspirations for Affect, Animals, and Autists came from her chance meeting with Stalking Cat, a man who extensively modified his body through tattoos, implants, and other alterations to make his appearance like that of a tiger.2 Chapter Six, “Mimetic Mixing and Technologies of Becoming,” explores the mimetic identification with animals (and in one instance, autists) in contemporary dance performance. Drawing on Deleuze and Guattari’s notion of “becoming-animal” in A Thousand Plateaus (1980), Carlson examines “the lines of flight [that] escape from known identities as the human enters into alliance with the animal in reciprocal becoming” (164). In a recent series of solo performances entitled Of This Body (2016), Paula Josa-Jones used Mary Starks Whitehouse’s Authentic Movement practice and composer Pauline Oliveros’s Deep Listening to explore liminal states of being through multisensory/affective engagement with animal and neurodivergent movement experience. Choreographer Jennifer Monson uses similar techniques to achieve affective and sensorimotor coemergence. Particularly fascinating in this regard was Monson’s Bird Brain Navigational Dance Project (2000-04), a four-year investigation of the movement trajectories and adjustments connecting a dancer’s navigational system with that of migratory birds.

Throughout Affect, Animals, and Autists, Carlson’s analysis is built on extensive and original research: attendance at live performances (often more than once), archival video work, and interviews. Some of the performances she writes about have received little or no critical attention, but even those that have receive invigorating new readings here. Carlson frames her meticulous performance analysis with a wealth of contextualizing information, such as the history of medical and psychiatric diagnoses, rehearsal and other production information, and cultural history. Because of this research, the book is a major resource for theater, performance, and arts scholars, particularly those in animal, disability, and affect studies. What truly distinguishes Carlson’s book, though, is the profound and deeply personal reflection that marks her analysis. Carlson makes her intellectual and emotional engagement with the performances she writes about central to her affective study. She records the pleasure and discomfort of watching these performances, the flickering of ambivalence, and the affinities she glimpses and experiences. In so doing, she pulls off the difficult balancing act of inhabiting her responses while subjecting them to rigorous critical examination. The result is often revelatory. Enacting and theorizing the affective interactions it describes, Affect, Animals, and Autists is a study of remarkable nuance and critical sophistication.

Stanton B. Garner, Jr. is Professor of English and Adjunct Professor of Theatre at the University of Tennessee, where he specializes in modern and contemporary drama and theories of theater and performance. His most recent book is Kinesthetic Spectatorship in the Theater: Phenomenology, Cognition, Movement (Palgrave, 2018). With J. Ellen Gainor and Martin Puchner, he is co-editor of the Norton Anthology of Drama (2009; 3rd ed., 2017).