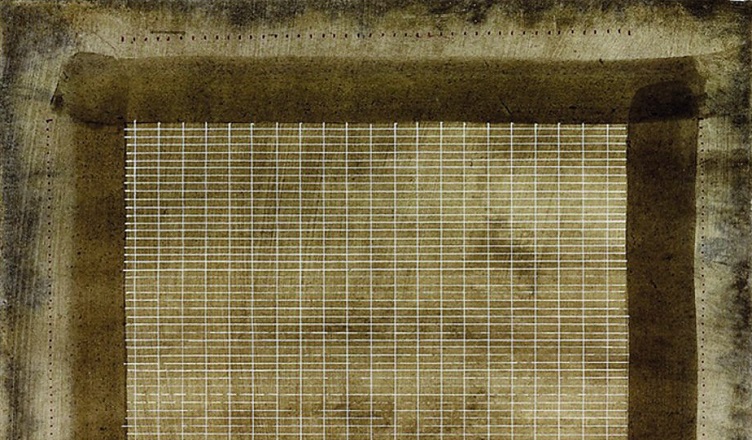 This review originally appeared in Sehepunkte: Rezensionsjournal für die Geschichtwissenschaften and has been translated from German to English by Steven Lindberg.

Although Agnes Martin (1912–2004) can be numbered among the important figures in American art after 1945, her oeuvre is only now beginning to be evaluated in its totality. The first retrospective in Europe was organized by Tate Modern in London in 2015 (subsequent venues: Kunstsammlung NRW K20, LACMA, Guggenheim Museum New York). Frances Morris’s exhibition catalog for the Tate retrospective (2015) and Nancy Princenthal’s biography (2015) were preceded by a few illustrated volumes, catalogs, and a collection of the painter’s written statements (Writings 2006). The central question of the “transcultural plexuses of connections,”1 which is essential to any more complex understanding of Martin’s artistic work, has been limited primarily to connecting the artist and her work to East Asian philosophy. Such readings contributed less to an analysis of her art than to the formation of a legend about the artist’s personality (“meditating hermit”). Mona Schieren’s book extends this approach to the artist and her work—the beginnings of which can be traced back according to the author to the tradition of Vasari’s vitae—by adding things like East Asian legends of artists. Schieren also opens up this common approach by emphasizing, detailing, and assessing the practice of transcultural pictorial translation in which Martin’s work participates.

Schieren’s book stands out for the way it ties reflections on cultural analysis—in the tradition of Mieke Bal—together with Régis Debray’s concept of mediology in order to show the extent to which transmission processes that go beyond the experience of the individual artist are inherent in Martin’s work. Schieren proposes that analyses of Martin’s works should counter the dualist principle of fullness versus emptiness, for instance, or of the grid as an “emblem of modernity” as advanced by Rosalind Krauss (1978) through the concept of “Asianisms” coined by Spakowski and Frey, for instance. In this, Schieren succeeds impressively in her stated objective of broadening narrow perspectives. The book consists of 509 pages and together with an extensive bibliography it includes a plate section with 245 images that establish material and qualitative associations with Minimalism, of which Agnes Martin is understood to be a pioneer.

According to the author, the qualities of meditation, silence, and isolation that are associated with Martin’s paintings must be seen in the context of the history of reception, cultural translation, refraction, and appropriation. In short, American interest in East Asian philosophy needs to be historicized for Martin’s work to be better understood. This is still an art-historical history Schieren tells, and so she begins with the presentation of Asian art objects as they begin to accumulate in collections and transfer to museums. The American elite’s enthusiasm for Asia and its arts not only led to the establishment of Asia-focused cultural institutions such as the American Oriental Society but also served as a means of distinguishing it—both the elite class and the arts it promoted—from the mass culture emerging in the United States at the time. Cultural appropriation also fed into a broader American exceptionalism that later reached a climax in the culture war between the United States and Japan. Schieren explores this intricate history by way of two case studies: the early presentation of Japanese tea ceramics at the World’s Fair in Philadelphia in 1876 (32); and the acquisition of Asian artifacts by major industrialists (John D. Rockefeller Collection).

The second chapter offers further examination of artistic reception history since the nineteenth century while also developing a focus on Asianists’ translations practices after 1945. Schieren’s goal here is to show how American Asianists framed Asian arts and philosophical concepts for a distinctly American mindset and audience. Orientalists and scholars of Asia, for instance, conducted studies and wrote art historical textbooks as well as philosophical texts on the genealogy and intellectual history of Taoism and Zen Buddhism. And they translated work being written by Asian scholars as well, such as the Japanese scholars Okakura Kakuzō (1862–1913) and Daisetz T. Suzuki (1870–1966). With such writings, Okakura Kakuzō (1862–1913) and Daisetz T. Suzuki (1870–1966) became part of the history of the translation of East Asian arts and philosophies for an American audience (ibid.). This is a complicated history, however, for these authors’ sometimes nationalist-oriented texts, and other times Western or even American-oriented texts, combine elements of the tea ceremony with Japanese Zen Buddhism and the scholars Laozi (sixth century BC) and Zhuangzi (fourth century BC). Schieren points to the introduction of concepts such as “emptiness,” which later contribute to an Asianist visual aesthetic. She also discusses Ernest F. Fenollosa (1853–1908) as well as his students Arthur Wesley Dow (1857–1922) and Ananda K. Coomaraswamy (1877–1947), both of whom worked as Fenollosa’s successors in the Department of Asian Art that he founded at the Museum of Fine Arts in Boston. Together, these authors and translators compiled a “set of heterogenous categories” that would become associated with Asian(ist) art in America. Of particular importance in Schieren’s history is her demonstration that the translation of original sources into English involved finding conceptual equivalents that were in part taken from Western categories of the eighteenth century, such as Protestant doctrine. New categories such as Suzuki’s “individual experiences” are not found as such in the original sources (377). These are adaptations for the American reader.

In the third chapter, Schieren begins her inquiry into Martin’s art and biography, emphasing transcultural influences on Schieren’s work. In her analysis of sources, Schieren discusses not only Martin’s gravitation toward East Asian concepts from Taoism and Zen Buddhism but also the influences of concepts from Platonism, American Transcendentalism, and Indigenous thought. Expanding the frame of reference to include Hopi and Navajo culture, Coptic textiles, and the artist’s own Presbyterian background results in a “set of transcultural overlaps” that opens up Martin’s body of work for new readings. The points of contact Schieren cites are: Martin’s exchange with migrants in her native city of Vancouver (e.g., Chinatown); forms of Asianism circulating in artists’ circles in New York in the 1940s and 1950s (especially in the milieu of the Betty Parsons Gallery); the artists’ colony in Taos, New Mexico; artistic communities (Coenties Slip); and the college that Martin attended. Schieren also cites Martin’s reading of texts not only by Arthur Wesley Dow but also by English and American writers of the nineteenth century influenced by “Orientalist thought” such as William Blake, Walt Whitman, and John Keats as formative for the artist.

Chapter four, with its four large subchapters, is the largest part of the book and brings many of the earlier threads together. The aesthetic categories from earlier chapters, for instance “reduction and emptiness,” are approached through new discussions about to Asianist concepts including: the primacy of the line (of calligraphy), the grid, and associated repetition; and imperfection as the genesis of the image. Schieren relates these aesthetic forms to Martin’s paintings and in doing so offers a crucial contribution to the analysis of the artist’s work. According to Schieren, for instance, the concept of space is central to Martin’s paintings in that the distinction between figure and ground (according to Boehm) is eliminated, making other forms of space conceivable. Overall, Schieren shows how Martin’s Asianist pictorial concepts reflect a criticism of representation concerning the question of the (de)subjectification of the artistic gesture that was being debated in Minimalist circles at the time. Martin’s art thus came into productive conversation with better-known postwar art, even if her points of reference were skewed in different directions, not only toward Asianist aesthetic forms but also toward craft-oriented art productions such as those practiced by Martin’s friend Lenore Tawney. The very mention of Tawney is welcome. 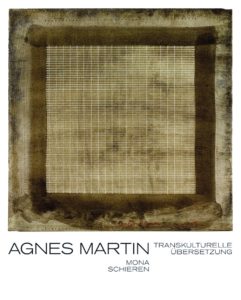 Anyone expecting a monograph solely on Agnes Martin will be disappointed by this book. But Schieren never set out to write that book. Instead she focuses on transcultural translation and with that focus offers an innovative methodology for art historians and the study of artists. Schieren unites different sources, bringing big picture histories to bear on the artist’s own texts and writing practices, for instance, which Schieren compares to Asianist writings from the period. It is precisely such contextualization that accounts for the quality of the book. Schieren’s focus on transcultural translation and the construction of Asianist aesthetics after 1945 also makes Martin’s role in that cultural movement clear. After the Second World War, many American artists were searching for alternative pictorial concepts and were expanding their aesthetic practices by exploring new techniques. The author capably demonstrates the extent to which Martin’s works can and should be read in light of Asian aesthetics, concepts of the image, and philosophies.