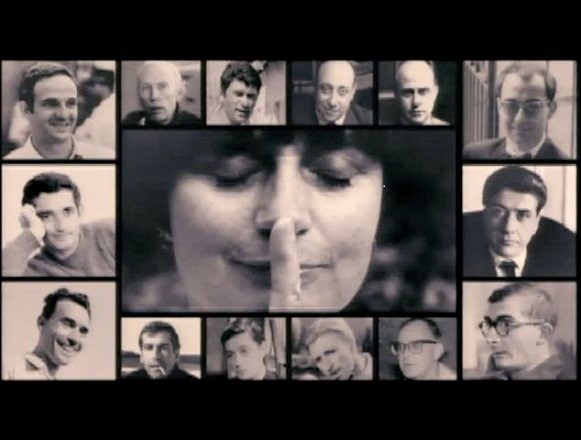 There is a shot in Agnès Varda’s autobiographical film, Les Plages d’Agnès (The Beaches of Agnès) (2008), in which the director surrounds a photograph of her own face by portraits of her contemporaries (152). Legends of French New Wave cinema limn the perimeter like a very highbrow, all-male Brady Bunch—François Truffaut, Jacques Demy, Jacques Rivette, Jean-Luc Godard, Alain Resnais, and Claude Chabrol. Varda places herself at the center of these illustrious figures, a position that also sets her apart. The composition suggests the particular, and paradoxical, brand of success that Varda has achieved. Rebecca DeRoo’s book, Agnès Varda: Between Film, Photography, and Art, grapples with just these contradictions, taking on a director who is lionized and yet marginalized by her gender, showered with awards but rarely given the financial support that her male peers enjoyed (156). The book’s careful readings invite a reconsideration of Varda’s films, which, as DeRoo demonstrates, have often met with incomprehension even as they have garnered critical praise.

DeRoo proceeds in part by reframing the context of the artist’s oeuvre. Rather than confine Varda’s sphere of influence to New Wave cinema, the author explores her engagements with multiple artistic mediums. The shot discussed above, for instance, is a reference to an earlier composition by René Magritte. That collage, titled Je ne vois pas la [femme] cachée dans la forêt (I Do Not See the [Woman] Hidden in the Forest) (1929) arranges head shots of prominent—exclusively male—members of the Surrealist circle, their eyes closed, around the periphery of a square composition. In the center, the words of the title are scrawled across a tableau (151). Only one word is missing; the elusive “femme” is replaced by an image, a full-body fantasy painted in the nude. Varda’s reference to the Magritte photomontage demonstrates her fluency with art history as well as the ease with which she glides among mediums. As the author explains in the introduction, one goal of the book is to present Varda’s work as “a projection of cultural history that illuminates multiple disciplines, including art history, cinema studies, visual culture, and modern French history” (7).

The book’s second aim is to “surface the political investments” in Varda’s oeuvre. This task requires an eye for subtlety; as DeRoo argues, the director’s politics are “present but unspoken, communicated through unacknowledged visual images” (13–14). Take her visual homage to Magritte, for instance. As DeRoo points out, Varda supplies her own portrait where the Surrealist posited a collective fantasy, suggesting the fraught and gendered terms of her engagement with art history. Moreover, the director portrays herself with eyes closed and a finger to shushed lips. The pose is a gameful response to Magritte’s play on word and image, but we should not miss the provocation. This mix of playfulness and critical wit is characteristic of Varda’s career, components of a strategy for “resistance and endurance” to which the artist alluded as she accepted the Palme d’honneur award at the Cannes Film Festival in 2015 (6).

Following the introduction, six chronologically arranged chapters trace Varda’s artistic trajectory. Most are built around a single exemplary work, beginning with her 1955 film La Pointe Courte. The exception to this rule is the final chapter, which surveys a medley of the artist’s recent endeavors including Les Plages d’Agnès (2008), the re-release of her work on the DVD Tout(e) Varda (2012), and her acceptance of the Palme d’honneur award. All chapters provide compelling close readings enhanced by explanation of each film’s artistic context and critical reception.

DeRoo’s nuanced approach yields altogether new understandings of key works in Varda’s oeuvre—for example, Le Bonheur (Happiness) (1965). The film depicts a young, cheerful housewife who commits suicide upon learning of her husband’s mistress. The tragedy is muted, however, when the other woman steps seamlessly into her predecessor’s place without any apparent disruption to the couple’s charming community. The film’s tone is so subtle, the irony so blank, that critics have tended either to find it utterly opaque or to read it as a straightforwardly anti-feminist tale about disposable wives and happy endings. DeRoo defends the film’s feminist undertones, rendering legible an irony that is “visual rather than narrative” (51). Central to the argument is DeRoo’s sensitivity to postwar French visual culture, as when she convincingly highlights Varda’s hilarious sendup of the ads and tutorials in women’s magazines. A less sensitive critic might not have distinguished the biting wit of the former from the visual schmaltz of the latter. 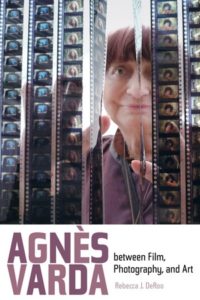 The chapter on L’une chante, l’autre pas (One Sings, the Other Doesn’t) (1977), a film set during the era of the Women’s Liberation Movement in France, delivers a similar payoff. While previous critics have praised the film’s feminist politics, they have also construed the film as a departure from Varda’s experimental aesthetic and an ill-fated dalliance with the commercial genres of the musical and the melodrama. By contrast, DeRoo presents it as profoundly engaged with Brechtian dramaturgy. “Instead of blending into a seamless whole and lulling the viewer into complacent absorption,” the book explains, “Varda’s musical numbers are discomfiting and unsettling” (75). Through this new lens, the film’s tone comes into focus. The reader can newly appreciate, for instance, an abortion-themed musical number set on the canals of Amsterdam, a common destination for women seeking the procedure before it was legalized in France.

Other chapters reveal a gentler side of Varda’s wit. De Roo includes a chapter devoted to Daguerréotypes (Daguerrotypes) (1975), Varda’s documentary about the family-owned shops of the Parisian rue Daguerre, a street which counted the filmmaker herself as a resident. While most critics have seen a charming and affectionate portrait, DeRoo outlines a much subtler intervention. She paints Daguerréotypes as a politically engaged film, a testament to the street’s working class residents at a time when such urban ecosystems were being razed in Paris in the name of an aggressive “modernization” policy. To illustrate the delicacy involved in Varda’s project, DeRoo’s cites the late nineteenth century photographic genre of the petits métiers. Inspired by genteel classism and the pseudoscience of physiognomy, the old photographic genre purported to distill artisans and laborers into their “ideal types.” The chapter parses the way in which Varda subverts these conventions, and the humility with which the director approaches the task of representing her own subjects (and neighbors). In the process, DeRoo persuasively recasts the film as a “profound, innovative meditation on the limits, as well as the necessity, of documentary practice” (144).

Another such moment comes in the discussion of l’île et elle (The Island and She). Presented in 2006 at the Fondation Cartier pour l’art contemporain, Paris, the work was dedicated to Noirmoitier, the seaside community where Varda spent summers with her late husband, the director Jacques Demy. A study in contrasts, the multimedia installation juxtaposed playful, touristic images (a cabana selling souvenirs, video projections of beach games, portraits against postcard-perfect backdrops) with images of grief (black-clad mourners encircling a table as if it were a coffin, a pile of salt meant to evoke the artist’s own loss). DeRoo’s commentary situates Varda’s work within the context of other performance and installation projects that explore similar antitheses, noting, for example, the resonance between the installation’s central projection, a film depicting Noirmoitier’s widows assembled on the beach, with Suzanne Lacy’s 1984 performance “Whisper, the Waves, the Wind,” featuring older women gathered seaside in California; or between Varda’s mound of salt and Félix González-Torres’s 1991 pile Untitled (Portrait of Ross in L.A). (The combined weight of the cellophane-wrapped candies in the latter work is famously equivalent to that of González-Torres’s deceased partner, who, like Varda’s, died of complications related to AIDS.) This rich contextualization helps the reader to better discern the conflicting facets of experience invoked in l’île et elle: “profound grief, emotional pain, amusement and entertainment, consumerist frivolity” (141).

Together, the readings in Agnès Varda: Between Film, Photography, and Art reveal both the breadth and depth of Varda’s artistic sophistication and political acumen. It is unfortunate that the timing prevented the author from including Varda’s most recent film, Visages Villages (Faces Places) (2017), which would have worked perfectly with the “new questions” of “legacy and history” that she addresses in the final chapter (143). In any case, DeRoo’s analysis accomplishes an admirable task, taking on an artistic oeuvre that is celebrated yet still often misunderstood. This approach is fitting for a director like Agnès Varda who, “even at this moment of the canonization of her legacy,” notes DeRoo, “refuses to occupy the place ascribed to her” (159).

Brittany Murray teaches French in the Department of Modern Languages and Literatures at Fordham University. Her research interests include gender and sexuality, French literature and film, and migration studies. She is an Associate Editor at CLCWeb, a quarterly journal of Comparative Literature and Culture.