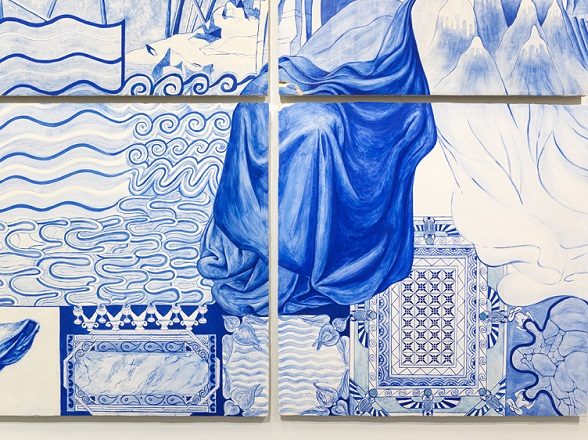 Commissioned by the New Museum for this, the Istanbul-based artist’s first solo museum exhibition in the United States, Asli Çavuşoğlu’s The Place of Stone consists of twenty-two aerolam panels cut on a fixed module (125 x 125 cm), arranged in two horizontally stacked and evenly spaced rows of eleven units each, and painted in fresco using a range of blue pigments. As is consistent with Çavuşoğlu’s work generally, the assembled panels incorporate a wealth of carefully researched historical references, at once demanding and rewarding an equally sustained and searching engagement on the part of the beholder. Devoted to the shifting valences of the color blue, Çavuşoğlu’s fresco maps transnational connections, situates ancient forms in contemporary discourse, and mines histories of pigments and materials to build up The Place of Stone from multiple loci. 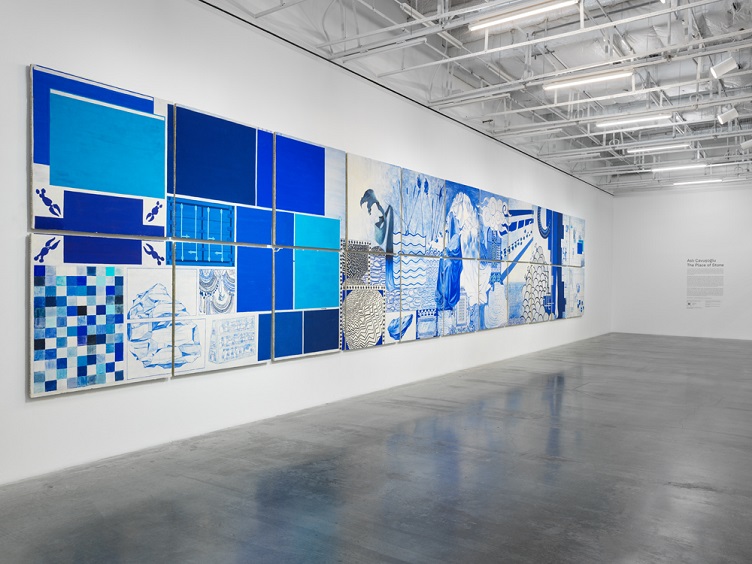 Installed in the museum’s lobby gallery, Çavuşoğlu’s imposing work takes up ancient histories underlying contemporary questions of facture, materials, and identity. Gridded lines enclose or are exceeded by organic forms that recount the histories across time and space of various blue pigments, including the specially privileged medium derived from the stone lapis lazuli. Present as early as the 7th millennium BCE in the Indus Valley, the highly prized, deep blue gem flecked with micaceous pyrites was traded across great distances; hoarded as treasure; used to mark the boundaries of territories; cut into amulets, seals, and beads; celebrated as a color of divinity; and eventually ground into the pigment ultramarine. 1More recently, as wall text in this exhibition makes clear, the flow of lapis lazuli has come to be linked to the international arms trade: the richest deposits of lapis lazuli have long been located in the Badakhshan region of Afghanistan, and some of the area’s most famous mines, in the settlement of Sar-i-sang—the “place of stone” from which Çavuşoğlu’s fresco takes its name—are at the center of an intense power struggle between Taliban fighters, mercenaries, and the Afghan government. Within the work itself, a small, subtly rendered sword is at once a miniature version of the sort of object one might find inlaid with lapis lazuli and a reminder of the longstanding geopolitical conflicts surrounding the stone’s continued sourcing and production.

By the 2nd millennium BCE, cuneiform texts described the blues produced from lapis lazuli as “lapis from the mountain”—as opposed to “lapis from the kiln,” or synthetic pigments such as Egyptian blue, which was composed of calcium copper silicate and ubiquitous in the ancient Mediterranean world. 2 Çavuşoğlu’s fresco refers to this association: to the right of center, veined mountains morph into a flowing drape with hints of a body beneath, perhaps a Marian relic. The visual fluidity effectively metaphorizes the mountain’s material transformation from stone to pigments in a world remade in those very pigments. Yet in leaving the material origins of the blues in The Place of Stone unnamed, Çavuşoğlu presses the question of material authenticity. The artist’s pigments do not, it turns out, derive exclusively from lapis lazuli. Rather, they index a broader, effectively global spectrum of materials of historically varied status, one that also encompasses—in addition to the aforementioned Egyptian blue—indigo (Indigofera or woad), artificial aquamarine blue, International Klein Blue (synthetic ultramarine and polyvinyl acetate), Bremer Blue (synthetic azurite), Prussian blue (oxidized ferrous ferrocyanide), Han blue (barium copper silicate), and turquoise (copper aluminum phosphate). These hues materialize equally heterogeneous images and motifs, from medieval saints to miniature “impressions” of female nudes (a nod to Yves Klein’s Anthropométries); from Egyptian scarabs to twisting, geometric shapes that evoke the decorative programs of mosques. Juxtaposing earthborn and synthetic pigments, modern and ancient formulations, and inimical legacies of the ancient (and not so ancient) pasts, The Place of Stone unsettles age-old hierarchies of value—the stratified politics of the material life of color.

Among the far-ranging images and materials that Çavuşoğlu brings together, one is struck by a number of headless figures, some of them drawn from other artworks or depicting religious icons. That headlessness admits different readings, perhaps referring to the anonymity of workshop artists or the human cost of sourcing and producing pigments from the earth; yet it also serves to foreground the body of color itself. In one instance, the grid frames a small bottle containing ground powder, one iteration of lapis lazuli. Elsewhere, a single, disembodied index finger, its depicted tip dripping with pigment, punctuates the haptic quality of material colors. At the lower right several gridded arrays seem to outline color’s material transformation, showing us an integral stone, packets of ground stone, and finally, a hand painting small globes in the range of blues used throughout the fresco. At the opposite edge of the piece, these globes find their pendants in the small, gridded squares executed in the same range of blues. Çavuşoğlu’s headless figures, globes, and grids produce vibrant bodies of color that act on beholders with equivalent potency. 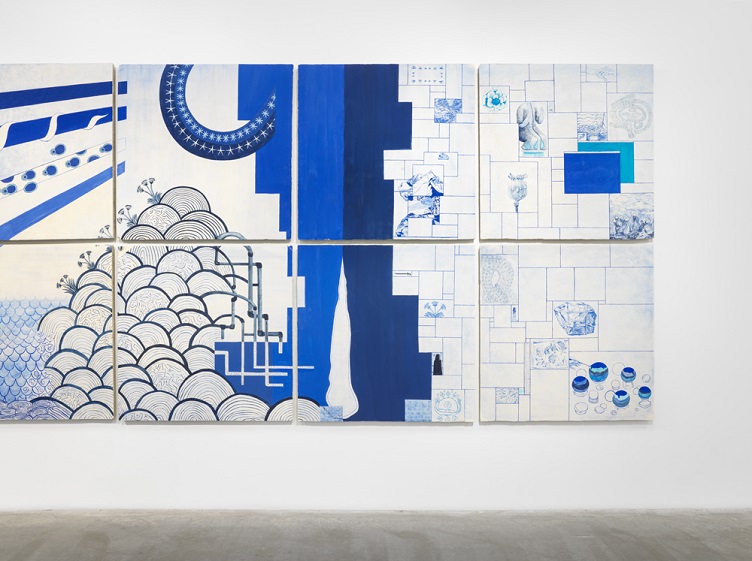 Aslı Çavuşoğlu, The Place of Stone, 2018, detail of right side

At the same time, however, the truncated anatomies of The Place of Stone thematize the arbitrary cruelty of borders and divisions, as materialized by the marked interstices between the work’s constitutive modules. These deliberate gaps disrupt what would otherwise appear zones of chromatic continuity and fracture forms painted across multiple panels. In one particularly telling example, a large, faceted stone appears divided across four separate panels, as though split by a lapidary; other faceted stones appear throughout. Underscoring the divisions of the fresco, the plaster edges of the panels appear deliberately damaged, especially at the joins, where irregular areas of painted plaster are conspicuously absent. These jagged lacunae underscore the fragility of plaster as a support, of fresco as a painterly technique, and of formal coherence as an ideal.

This reflection on borders and disjunctions is also apparent on the level of technique. Rare among contemporary artists, Çavuşoğlu’s fresco medium nonetheless has deep roots in history, and several motifs, including an area meant to invoke stone inlay, suggest she is reflecting in particular on the fractured and contested category of what we now call Minoan art. Applied to Bronze Age archaeological sites in liminal territories once claimed by the Ottoman Empire and now under the aegis of the Greek nation-state, the Hellenizing term effectively appropriates those sites for Greek antiquity. A passage toward the right cites a theme particularly favored by “Minoan-style” artists, depicting flowers growing from semi-spherical hills. Sundered by the edges that define the corners of four materially distinct panels, the fractured scene reminds us that objects from the ancient world—frescos, relief sculptures, mosaics—are often cut to match the size and scale of later panel paintings and to facilitate transport to far-off museums. But it also conjures the differential genealogies and political positioning built up from ancient fragments and materials by modern nation-states.

In her recent book The Classical Debt, Johanna Hanink deftly explores the way in which the European Union weighs the monetary debt of the modern Greek state against the European Union’s cultural debt to the ancient Greek past. Despite, however, the many classical antiquities within its borders, Turkey’s accession negotiations with the European Union have stagnated. 3 The 2011 exhibition “Scramble for the Past” at SALT, in Istanbul, took up the multifaceted question of the Ottoman Empire’s legacy in the intersecting stories of archaeological and art historical disciplinary formation, museum collecting in the 18th-20th centuries, and colonial violence. Sophie Basch’s essay for that catalogue describes the discomfort with which early antiquarians met the archaeological ruins of western Turkey, which expanded the idealized, monolithic picture of Hellenism crafted in Athens. 4 The histories of the modern nation states of Greece and Turkey include variously fraught encounters with these artifacts, contested international collection practices, and differently motivated efforts to disengage past ruins from present people. Yet despite this uneasily shared heritage, the two nations have played disparate roles within Europe’s geopolitical transformations. Çavuşoğlu’s citation of Minoan style invokes that tangled past, folding it into a larger reflection on the regulatory impact of borders upon the global circulation of resources, ideas, and cultural objects. 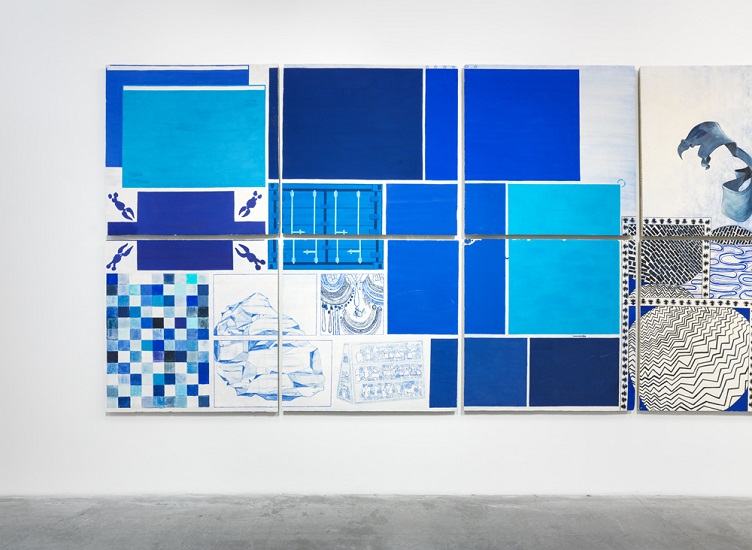 Aslı Çavuşoğlu, The Place of Stone, 2018, detail of left side

Even so, The Place of Stone strikes a cautiously hopeful note. To the lower left, one grid frames a depiction of the Standard of Ur (2600 BCE), a trapezoidal box inlaid with figural scenes in lapis lazuli, red limestone, and shell set into bitumen. Discovered by a British archaeologist, Leonard Wooley, in a grave at Ur (an ancient Mesopotamian site within the borders of modern Iraq), the object is now in the collection of the British Museum. One side of the box depicts war and the other peace; Çavuşoğlu, notably, has selected peace. And indeed, scanning the fresco anew, one might be struck by the alternately light and dark blue hands that reach out from larger squares of color to shake, as if affirming connection across the material and chromatic boundaries that define the whole. Both hard-edged and flowing, The Place of Stone builds up a narrative of materials that bridges the divisions imposed by its very structure, not to offer up a utopian vision of chromatic unity, but to create a range of hues, forms, and states of being connected through materials across space and time.

Jennifer Stager is an assistant professor of the history of art at Johns Hopkins and specializes in the art and architecture of the ancient Mediterranean and its afterlives.