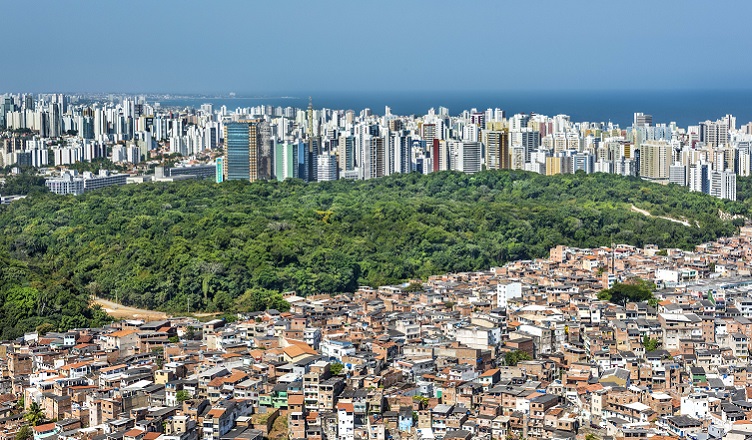 Curated by scholars of Afro-Brazilian and African diasporic art including Roberto Conduru and Patrick Polk, the Pacific Standard Time LA/LA exhibition Axé Bahia: The Power of Art in an Afro-Brazilian Metropolis at the Fowler Museum, UCLA, revisits the stereotypical conceptions of Bahia—a northeastern state in Brazil primarily known for its rich black culture—from a thoughtful and genuine perspective.1 In the mid-twentieth century, the Brazilian state sought to improve tourism and reboot its economy and began evoking a romanticized vision of Bahia, centering particularly on the capital of Salvador. Their campaign focused on the African-derived religion Candomblé, the dance-like martial art Capoeira, the baroque architecture of Salvador, and the state’s beautiful weather and beaches. These religious, cultural, historical, and climatic features came to define Afro-Bahianness and had already emerged from the 1940s work of foreign and local writers, artists, and anthropologists, including novelist Jorge Amado, Argentinean-born painter Carybé (Héctor Julio Páride Bernabó), and French-born photographer and ethnographer Pierre Verger. These figures have become indelible in the construction of an idealized Bahia; their works also dominate Axé Bahia and are presented not only as artworks but also as documentation and historical context.

With a selection of objects in highly diverse media dating from the mid-twentieth century to today, Axé Bahia accentuates all of these better known cultural expressions, but also adds a subtle critical perspective by featuring images that testify to the consequence of slavery and racism. These include, for example, Nilton Souza’s photograph City of Salvador and Its Social Differences (2015), an aerial shot of the city that depicts the stark division between a wealthy neighborhood with skyscrapers and an extensive sea of shantytowns. The show also highlights contemporary textiles by J. Cunha, the designer for the all-black activist carnival group Ilê Aiyé that fostered black artistic production when some other groups barred Afro-Brazilians from membership. Overall, the exhibition frankly explores the contradictions inherent in Bahia without trying to resolve them: the works at once present the state through a romanticized as well as a critical perspective, expressing continued bondage and freedom, urban decay and paradisiacal landscapes, tradition and modernity.

While Axé Bahia alternates from ethnographic to contemporary art displays, the show opens with a work that embodies both: Ayrson Heráclito’s Divisor (2017). A large horizontal glass tank that holds alternating lines of bright oranges, yellows, taints of red, and transparent liquid, the work mixes several ingredients popular in Bahia including Dende (palm oil) and salt water. These ingredients do not mix and create layers of expressive colors that embody Afro-Bahian culture displayed as a lyrical abstract arrangement of lines in vivid shades. Like a vinaigrette, the ingredients remain in the same place, statically, which can allude to the persistence of racism and, despite that, of Afro-Brazilian tradition as well.

Growing from this sculpture, the exhibition begins with a section featuring contemporary works that explore the history of slavery, including Heráclito’s The Cleansing of the House of Slaves in Gorée: Diptych I (2015). This performance for camera, included in the 2017 curated section of the Biennale di Venezia, documents the artist and two Senegalese men performing a Candomblé purifying ritual with leaves on the Maison des esclaves in Gorée, an eighteenth century structure with a first floor composed of terrifying, dark, airless stone cells for enslaved people awaiting travel for the Americas. A second performance,The Cleansing of the Tower House: Diptych I, for camera depicts the same ritual executed on the ruins of a large plantation in Bahia. These two works embody a contemporary perspective on the Middle Passage and the continuous relationship that Candomblé practitioners in Bahia have maintained with West African religions, constantly exchanging ingredients, objects, and letters.

While Axé Bahia includes many internationally-known artists such as Heráclito, it also highlights the work of lesser-known artists from the state, including notable examples of 2016 textile designs by Goya Lopes, one of which also investigates the Middle Passage and appropriates several infamous nineteenth century images of slaves viciously chained and abused. Other textiles examine Afro-Bahian music, dance, flora, fauna, and food. Overall, the exhibition develops in a thematic, non-chronological order, associating works by Lopes and Heráclito with 1950s ones by the woodblock printmaker Hansen Bahia (Karl Heinz Hansen) that present stylized images recounting the horrors of slavery. Based on Bahian poet and abolitionist Castro Alves’s poem O navio negreiro, these prints depict contorted, enchained, and impoverished black figures positioned in highly constrained spaces, as if the image of the Middle Passage continued in the form of misery for Bahia’s people of African descent.

While most of the contemporary work in the exhibition is arranged along the outer wall, three circular galleries in the center of the space elucidate various cultural specificities including Candomblé, Capoeira, and the Baiana (women dressed in traditional white outfits often associated with Candomblé priestesses, carnival figures, and vendors of the Bahian food Acarajé—black-eyed pea fritters with shrimp) through ethnographic photographs and drawings. The curators intermittently include some artworks in the ethnographic sections and some objects containing both religious and artistic meaning next to contemporary works, such as a costume of the spirit Egun from the early twentieth century placed adjacent to Heráclito’s performances for camera.

In the anthropological sections, the curators interestingly compare expressions of power from traditional as well as contemporary perspectives. In the section on the Baiana, a photograph of the Irmandade de Nossa Senhora da Boa Morte (an Afro-Brazilian sisterhood located in the Bahian town of Cachoeira) by Adenor Gondim (1994) is paired with an image of the group Full Bloom by Helemozão (Helen Salomão da Silva e Silva, 2016), featuring three black women wearing their hair naturally and raising their fist in a way reminiscent of Black Power activists. The sisterhood has been a symbol of Afro-Brazilian female power, as the women direct a procession honoring the Virgin every August and are suspected to secretly follow a syncretized practice that mixes Catholicism with Candomblé. This syncretism alludes to the history of oppression of the Afro-Brazilian religion and the means used to keep it alive—embedding and concealing its practices in associations with Catholicism. While Gondim depicts the sisterhood in their traditional clothing against a black background, Helemozão portrays the group Full Bloom in hip clothing in front of a wall of graffiti. The women advocate for black awareness and “black is beautiful” in a country that maintains a racist stance towards dark skin color and natural hair.

While the first two circular galleries address aspects of Afro-Brazilian culture from an ethnographic perspective, the third gallery contextualizes the history of Bahia’s popularization and the construction of the state as the capital of Afro-Brazilianness with archival material as well as artworks by Verger, Carybé, and others. This is an important contribution to the study of Bahian art, as the construction of black culture and its romanticized vision is often disassociated from this “cultural renaissance” of the 1940s. Historicizing Afro-Brazilian culture through this context positions it in real time, rather than in a floating timeless framework, as has been presented in anthropological studies such as those of Verger.

Surrounding these three circular galleries, contemporary artworks are arranged along the outer wall of the museum. This includes the section Candomblé as Artistic Inspiration with works by known artists Rubem Valentim and Agnaldo Manoel dos Santos. The final and most innovative section, The City of Salvador, contains works including graffiti, painting, video, sculpture, and photographs that challenge the vision of Bahia as a traditional, paradisiac place, and focuses on the urban dynamics of Salvador. For instance, J. Cunha’s Tropical City (2016) made of cardboard painted with acrylic, depicts flattened intertwining grids of modernist skyscrapers and skeletons of buildings in constructions behind two-story homes with tiled roofs. The outside of the box is painted in black while the inside, which depicts a more abstracted vision of grids, lines, and intricate rectangles, squares, and lines is painted in white. This work emulates the experience of walking through the city of Salvador, across the neighborhood of Barra and its high-rises, under the highways, through the hills of the colonial area of the Pelourinho, as well as the shantytowns away from the center. By using the wings of the cardboard flattened against the pedestal, as well as the assembled walls of the box, Cunha expresses the several layers of the city and its alternative levels that sometime require the use of outdoor elevators to go from one neighborhood to the next.

While combining ethnographic galleries and contemporary art is mandatory for an exhibition that introduces Bahia’s cultural nuances to a U.S. audience, it also points to an essential issue in the understanding of modern and contemporary art from this region, which is principally analyzed through an ethnographic lens rather than an art historical one. Heráclito’s inclusion in the Biennale di Venezia sheds new light on his work by associating him with other contemporary artists who work with spirituality—a section that carries its own number of problems—rather than examining the work as yet another contemporary re-enactment of Candomblé. In addition to this anthropological lens, the lack of historical contextualization of Bahian art has marginalized artists from the history of artistic production in the rest of Brazil and the world, maintaining them in a timeless sphere.

As Conduru points out in his catalogue essay for the exhibition, Bahia as well as the rest of Brazil is composed of a racially diverse population. Within art history, Conduru, Kimberly Cleveland, Ana Lucia Araujo, and others have presented Brazilian blackness as extending beyond the borders of Bahia, and as a diverse and complicated identification, culture, and artistic representation in Brazil.2 Axé Bahia’s continued focus on Afro-Bahianness is consistent with the historical awareness of this region and sheds new light on it with its nuanced perspective, but also allows for the persistence of the stereotype of the region as the center of “authentic” black culture in Brazil. However, because of its critical comparisons, the exhibition also paints an accurate and innovative portrayal of the state, one that celebrates its inherent contradictions rather than concealing them. As one of the few exhibitions addressing black culture in Latin America, Axé Bahia incorporates marginalized artists in the context of a larger narrative of Latin American art at PST: LA/LA.

As a Ph.D. candidate in Art History at the CUNY Graduate Center, Abigail Lapin Dardashti specializes in postwar Latin American and African Diasporic art. Her dissertation explores the resurgence of Afro-Brazilian art from the 1960s to 1980s. Her work has been funded by the Mellon Foundation, the Smithsonian Institution, and the CUNY Graduate Center, and was recently published in Public Art Dialogue and Diálogo. She has served as Curatorial Fellow at the Studio Museum in Harlem and the Museum of Modern Art, New York. In 2016, she guest curated Unpacking Hispañola: Scherezade Garcia and Firelei Báez at Taller Puertorriqueño in Philadelphia. Since her 2015-16 Public Humanities Fellowship at the New York Council for the Humanities, she is working on an exhibition scheduled for March 2018 at BRIC Arts about the historical relationship of the Dominican Republic and Haiti. Lapin Dardashti received a B.A. in Spanish at NYU and an M.A. in Art History at the Institute of Fine Arts (NYU). She will spend 2017-18 conducting dissertation research In France, Senegal, and Brazil through a Fulbright IIE Fellowship and an International Dissertation Research Fellowship, Social Science Research Council.