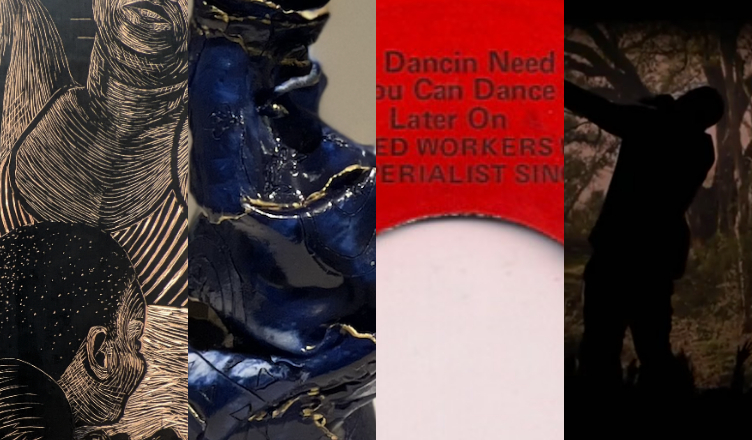 I am moved by the compositional incompleteness in Marika St. Rose Yeo’s ceramic series, Shifting Conversations.1 It is a series of eighteen multicolour vases that sit on plinths. Carvings pattern the surface of the vessels, referencing ceramic, floral and textile designs in the Caribbean, West Africa and Western Europe.2 Through conversations with Yeo, I came to learn that the geometric patterns that she carves onto the vessels are woodblock prints and wooden sculptures that her family exposed her to. These carvings, she told me, are artistic designs and processes that are commonly employed in St.Lucia. Yeo’s gathering of them together expands the racial imaginary of ceramics.3 The pieces are arranged in a conversational structure. Twins and triplets talk to each other and individuals talk to themselves. In the space of the gallery, the vases are arranged in a sort of archipelago. They eavesdrop on each other, inciting conversations between and among themselves and with their viewers. Some are terracotta; others are underglazed. All have accents of gold lustre that recall the practice of Kintsugi, the Japanese art that repairs broken pottery with lacquer as well as its philosophy that affirms brokenness and evidence of repair as an integral part of the history of an object. All the vases except two are fired, and the unfired vases reveal how each one is made of many fragments.4 Bearing the seams of their constructions, the vases transform incompleteness into beauty.

What are the sources of my pleasure as I contemplate Shifting Conversations? First, Yeo’s pieces direct attention to their form so we can meditate on what it is to live as a thing and on objects’ non-fixed, mutable lives. Their potential for mutation reminds us that the act of transformation includes the potential to change states of knowable life. Yeo’s hands are not the sole shapers of the fired vessels. Heat melts them into shapes that she can neither anticipate nor control. Because Yeo overheats the unfired works way past their allotted temperature, the clay fluxes and takes on new shape in the kiln. The unfired works in Shifting Conversations allow us to see the pieces as they stand before they enter the kiln. The display of both unfired and overfired objects not only gives viewers a chance to witness the material conversations among the elements but also this conversation guides us away from predetermined knowability. Yeo, like her sculptures, leans into the unknowable. Second, the vases lean in ways that defy gravity as well as the expectation of collapse. This assemblage of unfolding tilts the plane of recognizability and underlines the polyvocal nature of ceramic practices as well as the generative instability of conversations and their racial histories.5 Third, the fragility of the pieces, amplified by not being encased in glass for display, invites visitors to consider their own bodies as they negotiate the bodies of the sculptures. These interactions attest to the improvisatory impulses of ceramic making, which shapes not just the vases but how they move through the world. These vessels converse without relying on spoken language; their tacit communication enlivens the spaceways of the exhibition room as well as cue how the visiting body performs in their presence. Finally, the scale of the pieces encourages visitors to get closer. In such close encounters, the spirit of inquiry rewards. It reveals an ensemble of expression in the faces on these vases, from critique to hope to joy. These unexpected shifts index the very possibility that life can change, and does constantly, becoming something else.

The sculptures call attention to their fracturability as vessels that refuse a mimetic performance of aliveness. While the work of firing appears to arrest plasticity, Yeo’s work demonstrates the incomplete possibility of this process by showing how momentary that coherence-becoming is. Crystalizing a moment in an ongoing process, Yeo’s pieces are in the process of collapsing at the same time that they look incomplete as if in the process of creation or in a stage of formation. While the unfired vessels might wear away (crumble) from the touch of handlers and the over-heated vessels might eventually shatter, they all become sand and recycle into the earth. It is this multidirectional energy flow that has generated my interest in thinking through Yeo’s ceramic works as alive and interlinked with the elemental poetics in her materials. Each stage in the sculptures’ production and circulation marks not their end but a point of regeneration.

Shifting Conversations is mindful of the extractive processes that despoil the elements necessary for ceramic making (earth/land and water), and does not abide by the illusions of completion and stability that are critical to imperial accumulation. Instead, Yeo’s practice engages with the materiality of these elements and attends to the cycles of their ongoing unfinishedness in a way that opens viewers to other interpretative possibilities. In drawing out the uncertain, always shifting potentialities of conversations Yeo’s pieces “work against the assumption that conversations can produce transparent transactions.”6 Alluding to improvisational practices so central to black expressive culture, the performative impulses that are embedded in these sculptures blur the relationship between composition, exhibition, and improvisation.The vases refuse established ceramic hierarchies, shifting us to a paradigm where difference has power.

The ways that Yeo’s ceramic practice confers value onto broken fragments can reconfigure our relations with blackness without (re)determining it as fixed or absolute.7 The sculptures offer a challenge to approaches that render blackness at once transparent (we already know what it is) and opaque (its history is difficult). Neither static nor broken, the vases offer a logic of incompleteness that asks us to think outside of the logic of a system. The transformative labour of turning these sculptures from clay to ceramic is still ongoing. Their aliveness indexes stillness as a process of formation. Yeo’s series asks us to sit with something that is unknowable.8

Phanuel Antwi is an artist, organizer, curator and Associate Professor of English concerned with race, poetics, movements, intimacy and struggle. He works with text, dance, film and photography to intervene in artistic, academic and public spaces. His book, On Cuddling: Loved to Death in the Racial Embrace is forthcoming. Dr. Antwi holds a Canada Research Chair in Black Arts and Epistemologies at the University of British Columbia, Canada.