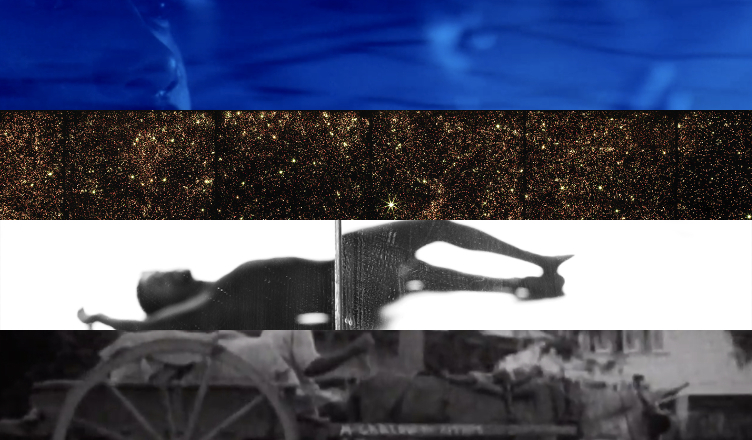 The installation Sky Box II (2021) by Charles Gaines shifts between the appearance of the night sky and images of legal documents in an embrace of opacity and the incommensurable. When the room is fully illuminated one encounters a paneled wall of words, some typed and some handwritten. On the upper register of the wall are facsimiles of antique pages whose small cursive writing and height of installation makes them nearly unreadable. The contents of the documents are transcribed in print on the lower register of the wall. Although more legible, they remain inscrutable blocks of legalese. They document the 1846 trials of Dred Scott, which would famously culminate in the 1857 Dred Scott vs. Sandford decision by the United States Supreme Court. The transcribed texts comprise a conversation between lawyers, witnesses, and judges in the form of long, compound sentences with looping clauses that require sustained attention. They entail points of clarification with regard to non-whiteness (“these negroes”… “a woman of color”) and corrections with regard to personhood and property (“Dred Scott was a slave was purchased as a slave”). Mediating all of this content is the perforated surface of the artwork, which is an architecturally-scaled lightbox.

As the lights in the room fade on a seven-minute timer, a secondary image appears with greater clarity: a dazzling view of stars in space. The size of the holes in the lightbox and the colors of the lights match the size and temperature of the corresponding stars of the source image (taken by the Hubble telescope). Under the glow of this wondrous atmosphere, the text becomes inscrutable and the opacity of legal language as a tool of power comes into view against the opacity of the night sky. We are left pondering the question of race, a question of who gives value to difference. In Dred Scott vs. Sandford, it was a legal system that asserted, so matter-of-factly and as if it were not white supremacist in origin, that “these negroes” were not citizens because at the time of the constitution’s writing they were “considered as a subordinate and inferior class of beings.”1 The overtly racist decision is considered the worst in U.S. legal history, and even though it was legally reversed by the 13th and 14th amendments, the cultural ramifications of its standing as precedent for legal discrimination remain. As Gaines asserts, “We live our lives differently as minorities than we did in the 1800s, but the struggles are still the same.”2

Gaines focuses not on the supreme court decision, but on its rather mundane beginnings with documents from the first Circuit Court case that lay bare the bureaucratic machinations of the legal system.3 The reproduced documents detail the locations of the Scotts at certain times and depositions to confirm that they were being held as slaves, under whose ownership they remained, and to whom they were hired out; all of it very logistical. Justice Taney’s logic in the 1857 supreme court case, by contrast, was neatly embedded in a sweeping argument that invalidated both the Missouri Compromise and the territorial statute as overreaches of federal jurisdiction, stoking the flames of civil war.4

Sky Box II points to the opacity of legal language and the weaponization of that opacity as foundational constructs of the United States.  At the same time, the omnipresence of the night sky suggests what might exceed or elide those constructs, even as the question of race appears to be temporarily decentered. The superimposition of the night sky and the juridical archive creates a space of indeterminacy where the roles of viewer and reader are dynamically entangled. It demands atmospheric thinking, a way to acknowledge the multiplicity of meanings that surround the work and that are produced by it. Such thinking does not tether the work to a specific historic referent or locate it in a stable genealogy of art history. Rather, it brings into view the various conceptual, systematic, and ideological forces that typically escape representation.

It is an atmospheric blackness, or what Michelle Wright identifies as the “entropic polyvalence” of its physics, that motivates the work’s conceptual power.5 The atmospheric encapsulates phenomenological experience (insofar as human survival depends on the earth’s atmospheric composition) and the dynamic of feelings and tensions that shape sociality, from Frantz Fanon’s description of the colonial state as a breathing body and colonialism as a form of “atmospheric violence,” to Christina Sharpe’s incisive invocation of   antiblackness as “the weather.”6 In Sky Box II, a conceptual-atmospheric blackness that lives in the interstice of bodies and cultures offers an abstraction that recalibrates black representational space into a more dynamic constellation.7 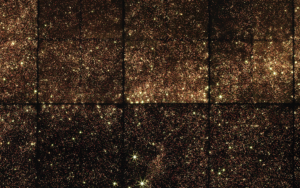 Although humans have an innate cognitive impulse to make relational sense of two things presented together, the incommensurability of dry legal language and the celestial sublime may exceed our capacity to imagine. It compels us to sit with the mixture of wonder, frustration, confusion and recognition produced therein. Gaines offers no solutions, claiming: “I’m not using this to liberate the world. My thoughts are more abstract than that.”8 Abstraction and conceptualism have long been understood as either unable to encapsulate racialized experience or as tactics to cleanse Black artists’ work of racial politics. But as scholars of African American abstraction have recently argued, what might initially seem like a tactic of separating oneself from the social world is in fact the pursuit of a mode that is capacious enough to address that world differently.9

Sky Box II questions structures and systems of power: state power, federal power, and legal power. It points to the elements of a corruptible system—a convoluted pathway, factual burdens of proof, rigid legal standards, procedural hurdles, fees beyond what an enslaved person could pay—unfolding before us, as vast and unmappable as the night sky. Yet the sky’s luminosity activates the expansive conditions of Black life that speed its atmospheric persistence in the face of increasingly narrowing access to power.

Ellen Tani is a 2022-2023 Postdoctoral Fellow at the Smithsonian Institution. Her research and curatorial work focus on questions of race and its intersections with gender, disability and politics in contemporary art. Currently, she is developing a book project on black conceptual practice. Her research and writing can be found in Art Journal, American Quarterly, and Panorama.