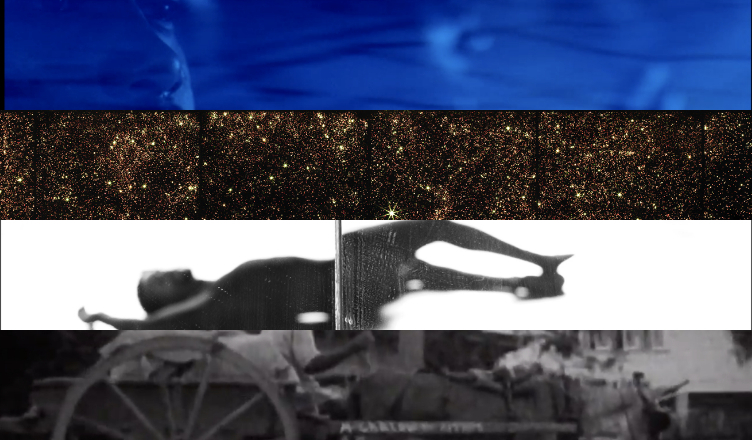 Adapted from an April 2019 performance at Chicago’s South Shore Cultural Center, Steffani Jemison’s On Similitude features Black pantomime artist Garrett Gray performing a set of exercises as Jemison’s voice delivers instructions off-camera. “Exercise one: let fingers fall from knuckles, as if dead.” We see Gray at a distance, in the center of a large and mostly bare black theater; then closer, at an angle, performing to and with his reflection in a mirrored studio. He wears a long-sleeved black bodysuit. Sound, image, and movement are minimal, but coordinated. Script and performance move together, yet neither is an exact replica or record of the other. Jemison’s instructions draw from nineteenth-century French acting theorist François Delsarte’s relaxation exercises, or what he called decomposing. For Delsarte, decomposing was necessary preparation for performance, an effort to loosen bodies from their cultural and industrial training, to (re)make the body into pliable material—a neutral palette for expression. On Similitude queries this legacy of performance. What reads first as an exercise in blankness slowly unfolds an unsettling proximity between the body’s doing and its undoing: “Exercise four: Raise arms above head. Decompose them. In other words, withdraw force. They will fall as dead weights.”

In Jemison and Gray’s collaborations, everyday performance is mirrored, multiplied, decomposed.1 Jemison examines the fetish of a pure or neutral body embedded in the pantomime tradition, a tradition which (mirroring the world) suppresses the way bodies are disciplined differently according to their proximity to whiteness: “As if all bodies are neutral—of equal value. As if all movements are available to all people at all times.”2 As Jemison reads the final exercises in On Similitude, we see Gray’s body fall in the studio, and come to rest in the theater: “Withdraw the will from your back leg, the body will drop to the ground.” “Let eyelids fall as if going to sleep.” “Let jaw fall so you feel its weight. In other words, decomposed.” Delivered in a neutral tone, Jemison’s instructions—to “raise arms above head,” “withdraw the will,” and “fall as dead weight”—are both matter of fact and obliquely menacing, at once an invitation and a command. As Gray’s jaw relaxes, his fall destabilizes. If there is violence here, it is not graphically represented; this is, and is not, about a Black man falling (repeatedly, on film). It is and is not about how it is possible for his body to move. To decompose, in this sense, is also to agitate the space between the literal and the figurative. Gray’s movements probe this space, allowing us to think it, in and out of and as language. The uncertainty matters, decomposing what we think we know. “The end is always out of reach.”3

Filmed in Black-owned performance spaces, as well as public parks in the Brooklyn neighborhood of Crown Heights, Jemison and Gray’s collaborations approach blackness as palette and backdrop. Gray’s black bodysuit cites and interrogates the mime’s standard costuming, with its assumption of a neutral or originary whiteness underneath. Similarly, Gray’s pantomime exposes gesture itself as imitation and inscription, untethered from a “neutral” body.4 Jemison’s films are alienating precisely to the extent that they draw our attention to everyday gestures as performance, a project that is ultimately ethical and linked to how we know and act with bodies in relation to other bodies.5 Iterative and cumulative, they work to break down fictions of neutrality themselves, asking viewers to grapple with the body as expressive material—as alternately “vital force” and “dead weight,” composing and decomposing. In decomposing the very idea of a neutral body, On Similitude draws a body in. (I sat watching a companion piece Similitude for so long that my left leg went to sleep, called me to witness my own unsettling stillness, prompted me to move.)

Jemison cites Homi Bhabha’s account of mimicry as a source of disruption to the reproduction of colonial subjects. In mimicry’s “almost the same, but not quite,” likeness itself breaks open the logic of reproduction.6 “Not quite” is a failure or an excess of signification, where the “veri” in “verisimilitude” comes undone and where the distinction between true (white) original and racialized colonial copy is revealed as a violent projection. “Almost the same, but not quite” names the movement of gesture from body to body, our entrainment into what comes to seem like reflexive action, the body’s constant production and reproduction of unspoken norms. These transmissions are not neutral. From body to body, almost the same but not quite. For Jemison, mimicry underscores knowledge as a practice that happens between and among situated bodies.7 (In trying to write about Gray’s performances—in which movement is an ongoing practice of thinking that subverts and supplements language—I shake out my hands at my sides, making a pale comparison, trying to get to in movement what I cannot fully get to in text.)

Along with Jemison’s camera, Gray’s movements invite a reading of the space between bodies as one of fullness, of teasing possibility, of similitude if not sameness.8 Similitude refuses sameness and singularity; gestures multiply. As Gray performs with his mirrored image, self and reflection move together and apart, underlining the self’s potential for endless variation. Jemison’s camera moves across body and reflection, sometimes inverting and blurring one or both. In the climax of Similitude, a close-up color image of Gray’s face is doubled, coming apart from itself as he moves through a range of exaggerated expressions—grief, laughter, mania, rage—while the soundtrack grows increasingly chaotic. If On Similitude plays with the flat affects of pantomime, in Similitude the fiction of emotional composure is un-loosed.

To loosen the body from its bearings is also to prepare for something.9 I think of Gray’s exaggerated steps, deliberately off balance, before the fall. Expression itself is untethered, decomposed.

Lindsay Reckson is Associate Professor of English at Haverford College, where she teaches and writes at the intersection of literary studies, Black studies, performance studies, and visual studies. She is the author of Realist Ecstasy: Religion, Race, and Performance in American Literature (NYU 2020), which received an Honorable Mention for the Barnard Hewitt Award for Outstanding Research in Theater History, and the editor of American Literature in Transition, 1876-1910 (Cambridge 2022). She is currently working on a book of short essays about gesture.