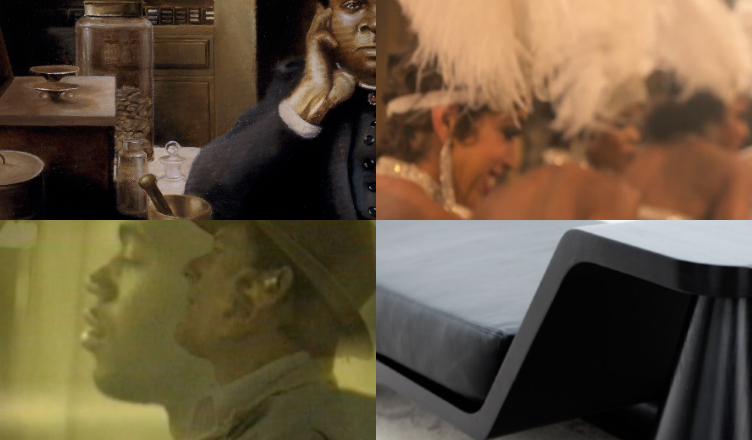 A chaise is a chair. But a chaise lounge is a very specific type of furniture, a sort of chair-bed. The reclining form of the chaise lounge forces the sitter to lean back—whether comfortably supported or uncomfortably propped up by the structure’s angles.  Designed to be a “long chair,” as the translation for the original French term chaise longue conveys, the sloping lines of this seemingly indulgent furnishing appeal to our body’s desire to sit, rest, and relax.

Artist and designer Simone Brewster debuted Negress chaise lounge in 2010 at the London Design Festival.1 I encountered Negress, and Brewster’s side table, Mammy, in 2011 in the exhibition Flock: Tell Stories, for which Brewster had been an organizer. I had never before experienced furniture that engaged with the black female body and its visual histories of representation. Why make a chair called Negress?

Brewster’s chaise is made of stained (ebonized) tulipwood and leather with an upholstered cushion. Taking on this type of chair as a formal provocation for her design vision, Brewster chooses to shape Negress with deconstructed elements of the Black female body. She has written poignantly about her inspirations, which include seeing the voluptuous bodies in Chris Ofili’s solo exhibition at Tate Britain in 2010. Her design work also takes inspiration from two paintings in particular: The Negress (1923) by Tarsila do Amaral and The Murmur (1943) by Wifredo Lam.2 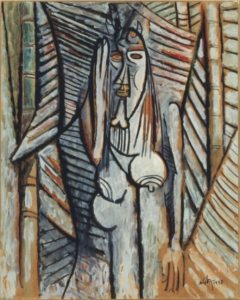 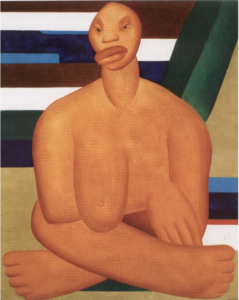 A common element in both works is an emphasis on the breast. Each work calls attention to parts of the female body in ways that are compelling and uncomfortable, with looming questions about who the images are for and who exactly they represent. By transposing two-dimensional anatomical imagery into a three-dimensional structure designed for leisurely repose, Brewster’s literally builds the chaise out of the Black female body, emphasizing how it has been positioned and presented for the gaze of others. Negress inserts itself into this canonical history of Black women’s representation, engaging and challenging its legacies.

Formally, Negress consists of a wooden base structure supported by four legs, topped off with an upholstered cushion. As Brewster explains:

The form of the pieces are deconstructions of the Black female body inspired by African sculpture which have been reinterpreted three dimensionally, taking references from both Primitivism and Cubism. Each supporting element stands alone as a monument to the breast, leg and face…3

Negress is a functional object that must support the weight of the human body. In choosing to create a support system made up of disparate body parts—not only anatomical “legs”— Brewster adds layers of narrative to the work, revealing the myriad forms of physical support emanating from the Black female body. The curved mass of the breast and the tip of the nipple are positioned as pressure points in the chaise’s construction. Speaking about Negress and Mammy, Brewster describes a “broken woman” whose “voluminous parts…uphold the surfaces which rest upon them, providing function. Quietly in service.”4 While the stark ebonized tulipwood is shaped into the quiet elegance of the “long chair,” the form is dependent upon the assemblage of supple parts that enable the chaise to function, that is to stand on its own and to bear the weight of the sitter.

Brewster was intentional about creating work that could be used, instead of sculpture or ornamental decorative arts. “I decided to make an object with function, specifically because it was an object which would be expected to serve silently instead of ‘speaking out’. Tables, chairs, beds, stands, these objects live to support our lifestyle.” Given this expectation of being in service to someone, Negress contends with the history of decorative arts objects fashioned to resemble Black bodies. Black figurines, such as sugar “servers” in the shape of Black women representing “Africa,” 5 and the larger body of domestic objects referred to as blackamoors, circulated globally as prized indicators of one’s class and taste for luxury. Understanding the power of symbolic representation, Brewster’s Negress evokes not only the primitivist art histories she describes as “hidden meanings” in her work, but also nods toward the racial exoticism in histories of design and decorative art that come with their own relationship to Transatlantic slavery and imperial economies.

Brewster chooses a title that also plays upon the associations that the word “Negress” itself holds in art, whether in reference to known individuals, allegorical figures, or racialized “types.”6 In literature, Negress may refer to “anonymous” Black women whose role is typically as some type of “help”—enslaved, indentured, or hired hands. Brewster’s design calls attention to the Negress as a composite portrait in the ways we have been trained to recognize that word in the arts and letters. Meanwhile the functional element of Brewster’s work allows for further envisioning the possibilities for design as narrative and storytelling in dialogue with history. 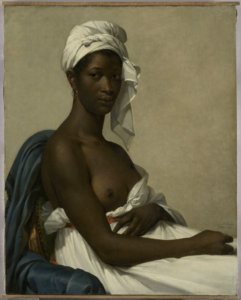 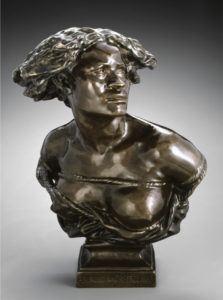 Comprised of deconstructed, abstracted forms and re-appropriated from colonial and modernist art histories, Brewster’s Negress is visually iconic with a subversive monumentality. It is a bold, black composition evincing beauty, grace, strength, and vitality molded into a functional object that is far from “quiet.” Once you begin looking, it speaks. In forcing the sitter’s body to interact not only with its form and its support system, but also with its ideas, Negress stakes a claim for design as a critical practice for Black makers. Designing with a (side) eye on history, Brewster complicates and expands on the luxury of leaning back in silence on this chaise lounge to remind us on whose back, whose body, we are leaning for support.

Michelle Joan Wilkinson, Ph.D. is a curator at the Smithsonian Institution National Museum of African American History and Culture (NMAAHC), where she is building the museum’s collections in design and architecture. In 2018, Wilkinson served as lead organizer for the museum’s three-day symposium, Shifting the Landscape: Black Architects and Planners, 1968 to Now. In 2019-2020, she was a Loeb Fellow at Harvard Graduate School of Design. Wilkinson holds a PhD from Emory University and a BA from Bryn Mawr College.