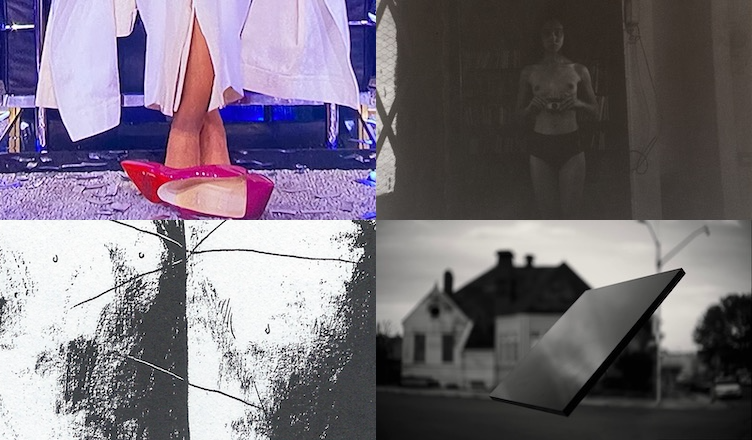 “There is a note Coltrane heard in his head but could never play on the horn. What does that look like? How does that torment a man’s soul?” asks Bradford Young.1 Young knows it’s not a question of where this note might be, but when.2 Not a question of finding it, but of being found.3

In his short film, Black America Again (2016), Young interprets the “again” it inherits from the title track of Common’s 11th studio album as that missing note.4 In the film, this “again” is not solely the marker for an interminable cycle of violence and foreclosed future (“Here we go, here, here we go again, Trayvon Martin will never get to be an older man” raps Common), but it also sets in motion what Moten calls the endless chant of blackness’s open set, a defense of the irregular, a wounding and rewinding of the given.5 “We are rewriting the Black American story,” sings Steve Wonder in the song’s bridge.

Young’s Black America Again rewinds the given history of antiblack violence to chant the possibilities of this open set, i.e. the endless predication—blackness is x, ad infinitum—which both engenders and is engendered by an open film set. For Young, image-making matters as a making with his “echo chambers”: his collaborators and the community that sends it and within which it takes place.6

Shot on location in Baltimore, the city Young has chosen as his home, the film moves along the route of Freddie Gray’s rough ride. The film adopts an ensemblic process rooted in the communities it features—teenagers, a mother with child, a whole family, children from an Afrocentric daycare, a center of intergenerational pedagogy, an excited gathering around a turtle, the holding ground on Baltimore’s infamous “corners.”7 The film eschews the fourth wall; its borders efface themselves as they are smudged, like the flare on the upper frame of the opening closeup of a caterpillar on a tree trunk over barely perceptible outdoors sounds. It is followed by a single note ushered in by a stilt-walker in a Baltimore alley which signals the start of the film. 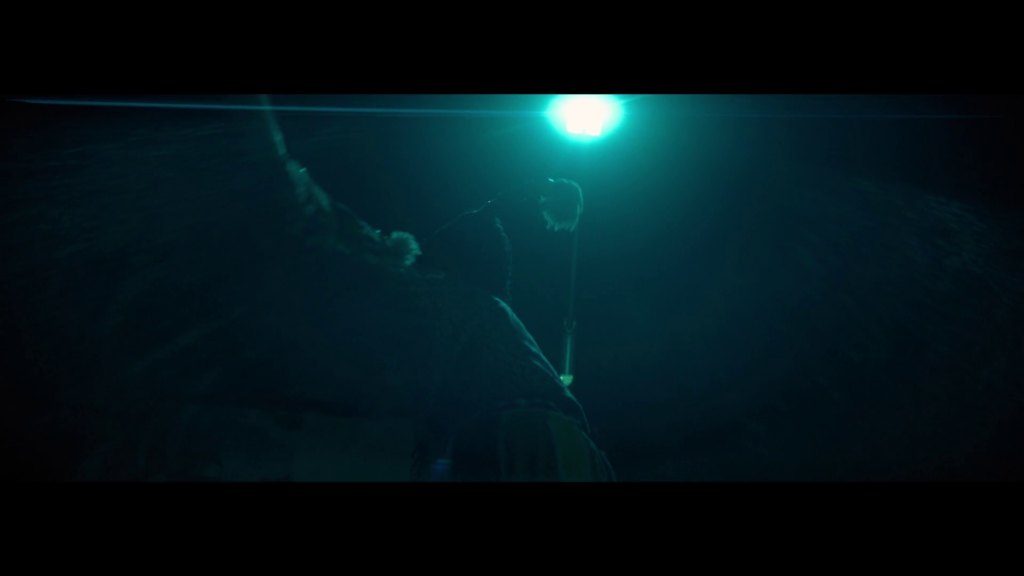 More than opening or closing, the film arrives and departs with two series of frontal and eye-level, black and white closeups of faces bathed in light, each looking intensely at the camera. 8 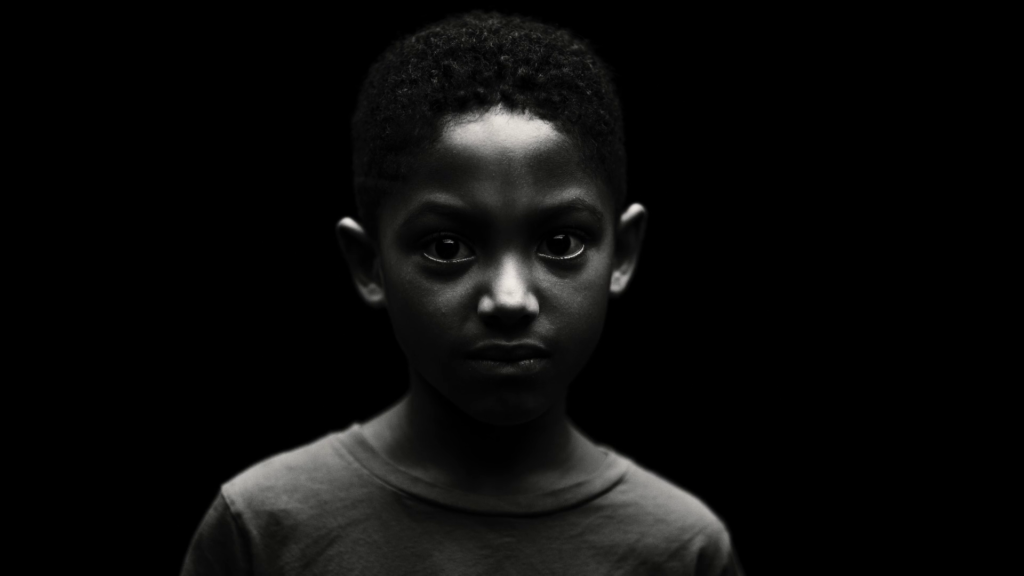 The faces emerge from a deeply black background, which brings forth the natural radiance of their complexion.9 Blackness is their everywhere and everything, their origin and destination, their ensemble and its music.

Since the ensemble rejects individuation, the “sitters” do not stand out from what they are “with.”10 Nor does dancer, choreographer and performance artist Rashida Bumbray, whose voice acts as a sound bridge between this “assemblage of community” and graffiti marking the site of Freddie Gray’s abduction.11 As she slowly walks through the Gilmor Homes followed by the camera, she nods to residents who reciprocate while she marks tempo on her tambourine. Throughout the three and a half minute-long take, her white dress and headdress are held in sharp focus, while her surroundings are slightly blurred, warped, as if wrapping around her as a visual modulation of her entanglement with the community. Nor does Common, when, later in the film, he raps in call and response with a djembe player while standing on an empty crossroad. The camera circles around them, keeping them in focus, but still catches passersby crossing the street.12

Here, as in his memorial video for Nipsey Hussle (Untitled, 2019), Young channels the missing, the dead, through a floating square Bynum, adjacent to the locations of the bumps and sharp turns that fatally injured Freddie Gray on his rough ride.13 A marker for (the ship’s) “hold,” the Bynum is also a portal, an escape hatch.14 Its twofold temporality—repetition and renewal—coalesces as Young’s double aesthetic move. There is the saturation of Roy DeCarava’s blacks, and the stripping down and unspooling of Common’s original song into samples separated by acapella breaks. The Bynum both holds and dissipates, contains and sends off.15

The chant continues. First it’s just a beat, and then a communal ritual. It becomes a (ring) shout, performed following the drawing of a Kongo cosmogram with white chalk on a West Baltimore intersection by white-clad women from Bumbray’s ensemble. A piano playing on location and the diegetic chatter of onlookers grounds the scene in time and place. But the women foreshadow another temporality by moving in slow motion until the circle is completed and sound is re-synchronized to the beat set by the ring shout Sticker. Then the Shouters, almost imperceptibly out of sync, perform a version of Parliament’s “Swing Down Sweet Chariot,” a rewinding of a funked-up version of this pre-diasporic ritual.16 Suddenly, one of the Shouters begins to twirl in slow motion and seemingly takes off from the ground. 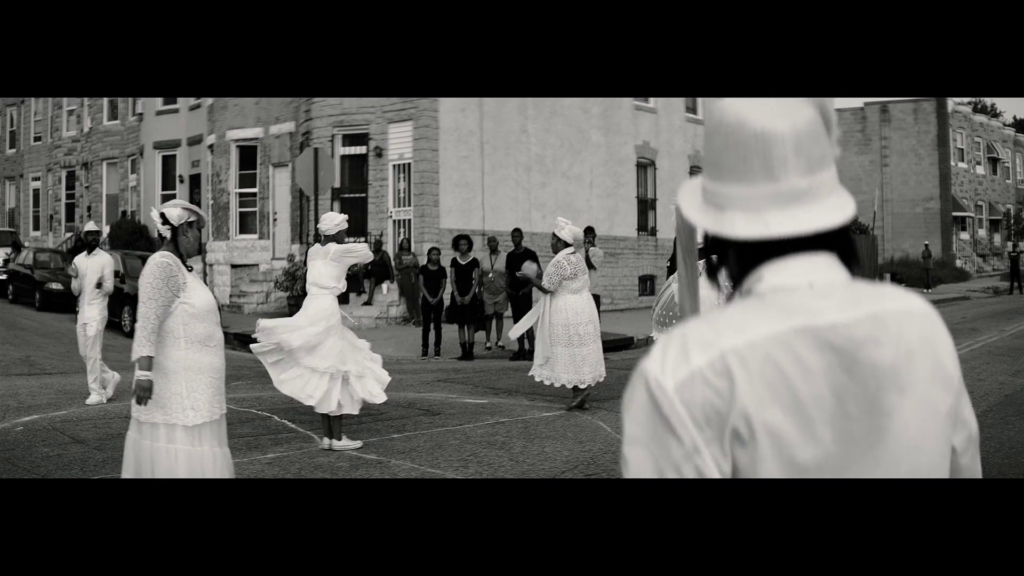 When the sequence is brought to an end by the Sticker who re-synchronizes sound, the film transitions to Stevie Wonder’s bridge while the Bynum floats in the center of the frame. 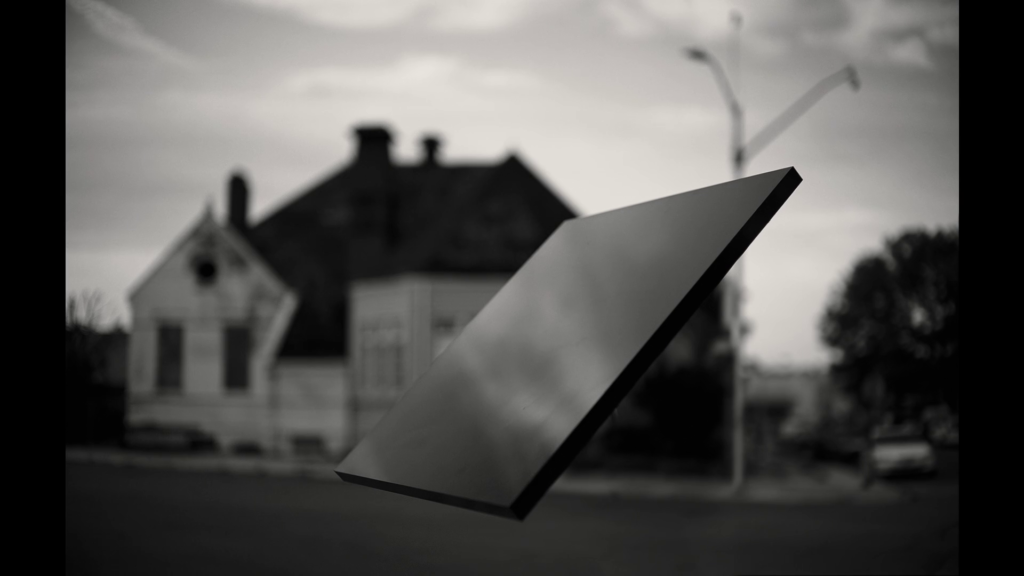 The woman’s flight recasts the Bynum as a vessel, the chant’s endless predication resumes and delivers the film to its “black futures” with a second series of black and white closeups, primarily of children.17 This open set is a repetition with a difference, a regenerative reverb. Blackness is x, endlessly. Again and again.

Alessandra Raengo is Associate Professor of Moving Image Studies at Georgia State University, founder of the liquid blackness research project and Founding Editor in Chief of liquid blackness: journal of aesthetics and black studies, now with Duke University Press. She is the author of On the Sleeve of the Visual: Race as Face Value (Dartmouth College Press, 2013) and of Critical Race Theory and Bamboozled (Bloomsbury Press, 2016).