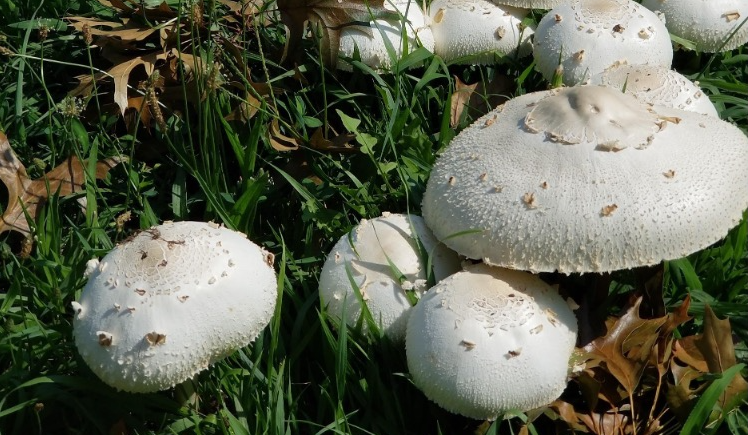 When Adrienne Rich picks mushrooms “at the edge of dread” in “What Kind of Times Are These,” there must be imminent danger. I found Rich’s poem long after my professional fungification, but it was Anna Tsing’s The Mushroom at the End of the World: On the Possibility of Life in Capitalist Ruins (2015) that made me aware of what I had become. Tsing describes her fieldwork in the forests of Oregon among pickers of the matsutake mushroom, which grows only in forests that have been disturbed. In this case, a forest that has been logged, lodgepole pine replacing the original ecosystem. Matsutake works with disaster: it was the first living thing to emerge in the aftermath of Hiroshima (Tsing 3). It assists a new forest in establishing fungal-tree root networks. Hm, I thought. That sounds familiar.

The matsutake is a metaphor of my undisciplined life as a humanist in a conservatory. Like the matsutake, the Liberal Arts department at Juilliard grew in a disturbed forest where the order of the university no longer reigns. We too are hidden; you need to know where to look for us. We are not a department that shares one field, and in the space between disciplines, I shifted shape. In her description of forest evolution, Tsing says, “changing with circumstances is a matter of survival” (27). My career in the Mushroom Gang might illuminate the dread that is upon us.

I entered graduate school in 1993, the last moment to believe “The Bowen Report,” which predicted a shortage of humanists and a surplus of faculty positions in the 1990s. As Leonard Cassuto argues, it was catastrophically mistaken: “the book became notorious for its Panglossian forecast of better times for academic job seekers. It soon symbolized the misguided optimism of a generation of would-be professors who kept waiting for their ship to come in, and eventually starved by the shore.” I was lucky to find a full-time position in 2003, and then to change positions in 2007, just before the financial crisis. I landed a rolling-contract job with rank but no tenure—typical for instructors at conservatories and design schools. Most importantly, I did not land in an English department. I would become undisciplined among others. We are historians, poets, political theorists, art historians, philosophers, linguists, and even literature-types, all clinging to a school with other purposes. Everything we teach—composition, core courses, and electives—is part of a curriculum for performing artists. They require credits outside the major to attain a bachelor’s degree. A technicality, really. Our marginality makes us precarious, and thus, full of dread. But we are a multitude. We spring up all over the place. We are mushrooms at the end of a world that envisioned humanists as prodigies of culture. Sempervirens semper fi. No more.

Above is the stump of a Norway maple growing fungi on a curb in Highland Park, New Jersey. This is me: adventitious, peripheral. Not-tree, I never became the kind of scholar who taught me. I don’t cultivate majors. I don’t teach electives to undergrads who love literature. I have no graduate students. Working in “Liberal Arts,” an undiscipline, I learned to attach myself to heartwood: reading carefully, writing reflectively, responding in community. From these commitments, my department explores ways of knowing and political awareness. We address students as beginning world-citizens. It isn’t a liberation into a stream of consciousness led by the professor’s research, but there’s a lot of action in the Stump. These days, clearing a space for student self-examination and the discovery of an interconnected world is hardly trivial. Even now, my department is moving from a defunct version of the Columbia Core Curriculum, a study of absolute texts, to a question-centered core that opens into the crises of the twenty-first century. In other words, we adapted in order to survive. But as Anna Tsing asks, what does survival mean?

The Stump is everywhere now. As I write this, the Kansas Board of Regents has voted to suspend tenure for two years and vitiate structures of shared governance throughout the state university system. The CUNY schools remain chronically underfunded. Small liberal arts colleges like Sweetbriar and Green Mountain College teeter on the edge and fall. Marquette University is slashing its non-tenured liberal arts faculty. Examples abound, but the take-home is: we are always in danger. What lessons can be gleaned in dangerous times from my undisciplined life?

This is still the edge of dread. But dread can rid us of illusions that retard the work. For example: It has been difficult to admit that institutions have no honor. The local Stump considers me a factotum. The structures that govern our employment are transactional, not ethical: we are a means to an end, and we can be replaced at the will of administrators. That doesn’t mean we have to act as if we are replaceable. Undisciplined labor thereby takes on an intellectual, rhetorical, and political cast.

We must develop a theory of our fungal powers and deploy them as mycelial praxis. The visible mushroom, after all, is the fruiting body of a larger creature strategically invisible from above. By recognizing undisciplinarity, we understand ourselves not as the old university, a besieged forest, but the mycelia that network the ground for a post-Stump ecology. Not exactly rhizomatic, but not powerless, either. It’s hard to let go of the structures that formed us, but a prefigurative pedagogy requires it. As universities and forests fall into capitalist ruin, we must become the other world that is growing in the dark.

Anthony Lioi is Professor of English at the Juilliard School in New York City, where he teaches composition, American literature, and environmental humanities. He is the author of Nerd Ecology (Bloomsbury Academic 2016) and is currently working on a book on metahumanism and ecomedia. He is past president of the Association for the Study of Literature and Environment and co-editor of Resilience: A Journal of the Environmental Humanities.