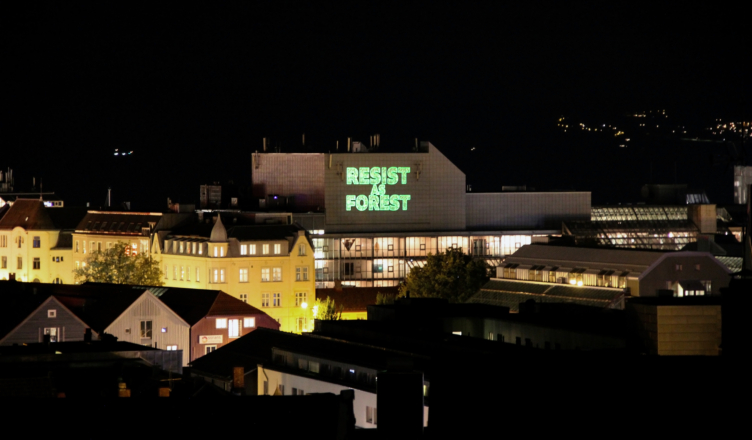 The thinker-creators gathered here take inspiration from Christina Sharpe’s command that “we must become undisciplined.”2 True to “becoming” rather than “being,” the voices of “Becoming Undisciplined” express ongoingness, incompleteness, even uncertainty. In the form of essays, interviews, self-writing, letters, maps, film, and visual and performance art, these works ask what it means to veer from disciplinary strictures while creating and envisioning change. “Discipline,” as refracted through the contributors’ lenses, comes to mean not only academic departments and fields but also genres, borders, judgment, policing. Most importantly, discipline comes to mean categories and classifications of race, gender, ability, sexuality, and professional status. Despite this variation and our refusal to situate this cluster in one field or even in more capacious rubrics of specific “studies” or “humanities,” common threads emerge. Perhaps none is more prevalent than a sense of imperilment that calls in turn for disassembling the entrenched institutions and values that have created conditions for loss as well as—perhaps—transformation.

For us to be capable of resisting, we must become the forest—and resist like the forest . . . that knows it carries ruins within itself . . . [W]e must lend shape to this political, affective feeling . . . to lend meaning to our actions.
—Eliane Brum

As careful readers of Christina Sharpe and Mel Chen3 and observers of the defiant work of the KTH’s EH Laboratory (EHL), which, in its own playful words, has been “undisciplining Environmental Humanities since 2017, naturally,” we have long worked across diverse archives and explored how “sectarian” academic knowledge infrastructure prevents us not simply from addressing questions about environmental justice but even from actually asking them.4 Yet, while such “undisciplining” has been our central research method, we also had to confront its lightning-speed neoliberal appropriation. Austerity measures in Brazil, Norway, and worldwide disassembled, undisciplined the humanities programs’ infrastructure, flooding universities, decadently, with industrial money and storytelling on the benefits of extraction, and threatening both environmental and educational ecosystems (Figure 2). At the Norwegian University of Science and Technology (NTNU), Norway’s largest public research university, and Hanna’s home base, providing technocratic eco-solution plots and catering to the nation’s extractive industries—often at odds with NTNU’s humanistic creed: “knowledge for a better world”—is, in fact, an official research direction.5 Yet, we recognized that compromised or endangered academic infrastructures are still desperately needed, even for any “undercommons work,”6 which made us wonder: how do we grapple with this institutional undoing in meaningful ways? In the process, we began to search for remaining public infrastructures and for a humanistic discipline, just one “without the punish,” as Damir Arsenijević quipped,7 to “lend shape” and space to a less necrotic environmental storytelling.

Resist as Forest, a public environmental storytelling action, emerged from this effort, envisioned by Pablo as part of his NTNU ARTEC artistic residency in Trondheim, tied to Adressaparken,8 an interactive urban park awarded the SXSW Place by Design.9 Co-curated by Hanna, it was also our attempt at disobedient and collective environmental storytelling and the “(un)disciplined” reclamation of the infrastructures of the humanities in public spaces.10 The ethos and form of the intervention are indebted to the work an award-winning Brazilian investigative journalist, Eliane Brum.11 However, Resist as Forest, an experiment in techno “commoning,” was ultimately a communal performance, carried out in Adressaparken, a space co-owned and co-managed by NTNU, the Trondheim Municipality, and Adressa (one of the oldest newspapers in Norway), but, also, a public space that is ours.

On September 27, 2019, Resist as Forest was staged in the center of Trondheim, our “Silicone Fjord” port city in Norway, in a South Sámi region in the throes of green colonialism conflict during the Global Climate Strike.

How did we get from a university-funded, individual residency to a collectively authored, polyvocal, co-designed transmedia storytelling action at the center of our industrial-knowledge factory town, just as the university was undisciplining, austeritizing critical humanities out of existence, top down, and by design?

Pablo arrived for his short residency in Norway from Brazil at the height of Amazon deforestation, fires, and violence, originally planning to focus solely on the Amazon crisis. Soon, other important connections—Norway’s crucial support for the Amazon Fund, but also local deforestation and overdevelopment practices and investment in Hydro Alunorte, for instance—expanded the dimensions of the project, making it eerily local and relevant.

Sound Clip 2. A short podcast about Resist as Forest. Created by Magda Futyma for NTNU ARTEC.

To start, we mapped existing public, academic and technological, infrastructure still available in the city, and we contacted local environmental and research groups, to respond to deforestation urgencies in real time, and collectively. The publicly accessible Adressaparken, which was designed precisely as “an open arena for . . . new expressions and . . . digital forms of narrative,” was the center stage for this intervention.12 We felt, at the encouragement of NTNU ARTEC director Andrew Perkis, that this public site (truly open-access and free of charge for technologists, artists, and the public alike), equipped with environmental sensors and embedded outdoor speakers, could well serve as a liminal, university-city exhibition space for democratic environmental storytelling through co-design, done with tellers and publics normally not included in industrial extraction plots.

Despite the heavy infrastructural machinery involved, so to speak, Resist as Forest began with words, not technological hardware. It took its title and conceptual form from an essay by Brum, who argued for the need to challenge the environmental “ignorance of continental proportions” and to think about the “forest as the center of our world.”13 We must, she insists, learn how to “become the forest” and “resist like the forest,”14 building decolonial alliances to move away from predatory extraction. Her ecopolitical metaphor of “becoming forests,” then, became a building block, an aesthetic, and a disciplined collaboration method, eventually materialized and performed by us at urban, lateral and vertical scales, and in multidimensional and transmodal ways. First, in our classrooms, research labs, and then in the city streets (Figures 1, 6; Sound Clips 1–3).

Sound Clip 3. A longer podcast about Resist as Forest. Created by Magda Futyma for NTNU ARTEC.

We used the park’s outdoor space and interactive hardware (Figure 3) for the performance and enhanced it with external speakers, projections—yet, most importantly, the humanware of the city (Figure 4). We recognized, in other words, that “people are infrastructure,” too.15 Throughout the preproduction and co-design processes up to the final performance, we had collaborated extensively with local and international students, artists, city residents (young and senior), migrants, scholars, administrators, activists, technologists, the NTNU ARTEC collective, and city institutions, working across languages and knowledge regimes. We learned a lot from participants from both Norway and abroad about the global scale of the deforestation crisis, its colonial, extractive, and political causes, planetary entanglements, and about our own town. When we took the urban stage for a few hours during the Global Climate Strike, the public assembly transformed into what Hanna called “the urban chorus,” taking over the city and its skyline and airwaves, with volunteer co-creators, performers, and hundreds of participants from across the city’s social strata. This urban orchestration gave us a sense of what “resist as forest” could feel like, thick with sounds and words resonating in different languages, across different bodies, aesthetics, media, and the city (Sound Clips 1–3). It also made us realize the enormous emotional impact of this crisis—the grief, anger, helplessness, fear, hope, defiance—felt across globe. Participants expressed it in workshops, in poetic performances, and in the shared visual and sonic inscriptions they eventually contributed and performed in their own languages (Figures 1, 4, 6; Sound Clip 1).

The format of this public assembly, then, was as multimodal and immersive as it was collaborative and interactive. The public intervention included a co-produced 3D animation, an immersive soundscape, theatre, multilingual poetry recitations, and flyers (Figures 1, 2, 4–7), and performative transmodal interactions. For instance, the pre-recorded multimodal projection (Figure 6) was augmented by a “becoming bodies / trees” street warm-up and a Gibberish group performance (Figure 4).

The pre-composed immersive soundscape of the Amazon and Norwegian rainforests (Sound Clip 1), mixed with contributions by students, artists, activists, and community members in multiple languages, and played in the park, was amplified by live voices in multilingual ecopoetic recitations (Sound Clip 1; Figure 4), a street theatre improv performance (Figure 5), and it was overlaid with the city noise and car traffic. Monumental 3D forest animation (Figure 6) was interspersed with the motto “resist as forest” in 25 languages (translations contributed by volunteers), looped on a façade of the symphony building well into the night (Figures 1, 7).

Can a public immersive storytelling event challenge industrial plots when entire disciplines and academic infrastructures are vanishing, like the forests?16 Resist as Forest, an ephemeral, theatre-like transmedia event, made space for transnational and public storytelling about environmental-injustice architectures, the planetary crisis, and the fragility of academic ecosystems. We don’t know its long-term impact, of course, but Resist as Forest placed us at the center of the city and the Global Climate Strike environmental retellings, together with more than 7 million others (by very rough estimates). Crucially, it “lent shape to an idea” that different relations are possible;17 it monumentalized environmental narrative disobedience, global solidarity and local collaborations, across the urban space, bodies, institutions, disciplines, languages, façades, and machines. Its grand and intimate scale and polylingual choral character, engaged us, then, in the urgent ceremony of transnational solidary and cocreation.  After all, it was a transient, fragile “we” who augmented this environmental storytelling, providing prosthetic extensions to the glitchy technological and institutional hardware, interfacing across the university / city / gender / class / language / national borders divide. If anything, we tried to discipline public institutions back into aligning with their public service mission for a day, finding allies and collaborators in unlikely places along the way, and learning how to feel differently about sharing the public stage together. Ultimately, Resist as Forest was an invitation and a rehearsal for others to reclaim the public space, hardware, and academic infrastructure that belongs to them—to learn how to resist, “like the forest,” the plotting of extractive regimes.

Podcasts (short) and (expanded) with Resist as Forest creators and participants were an NTNU ARTEC commission produced by Magda Futyma.

Hanna Musiol (PhD, Northeastern) is Professor of Modern and Contemporary Literature in English at the Norwegian University of Science and Technology, Norway, and a founding member of NTNU ARTEC and NTNU Environmental Humanities groups. Her interests include transnational American literary studies, transmedia storytelling, and critical theory and pedagogy, with emphasis on migration, environmental humanities/political ecology, and human rights. She publishes frequently on literary and transmedia aesthetics and justice, and her work has appeared in DHQ; Environment, Space, and Place; Oil Culture; Technology of Human Rights Representation; Journal of American Studies; and Writing Beyond the State. Musiol regularly co-organizes city-scale curatorial, public humanities, and civic engagement initiatives, Narrating the City in Boston, Of Borders and Travelers, and Spectral Landscapes, in Trondheim, and she collaborates with urban storytellers and grassroots storytelling ensembles such as Literature for Inclusion and Poetry without Borders in Norway.
Pablo DeSoto

Pablo DeSoto  (PhD, Federal University of Rio de Janeiro) is the Director of  LABoral Art and Industrial Creation Centre  in Gijón, Spain. He is an experimental architect and a radical cartographer with extensive experience in working with diverse communities across geographical and disciplinary borders. DeSoto holds a graduate a degree in architecture (MA, KTH), and his research and artistic practice use fieldwork and critical epistemologies to produce spatial knowledge to investigate urgent political and environmental conditions of our time. DeSoto is also a co-founder of hackitectura.net, the editor of three books, After.Video: Assemblages; Situation Room, Designing a Prototype of a Citizen Situation Room; and Fadaiat: Freedom of Movement, Freedom of Knowledge; a co-author of the Critical Cartography of the Straits of Gibraltar; and a recipient of NTNU ARTEC Artist in Residence, LAB_Cyberspaces, and UBA Elinor Ostrom awards.