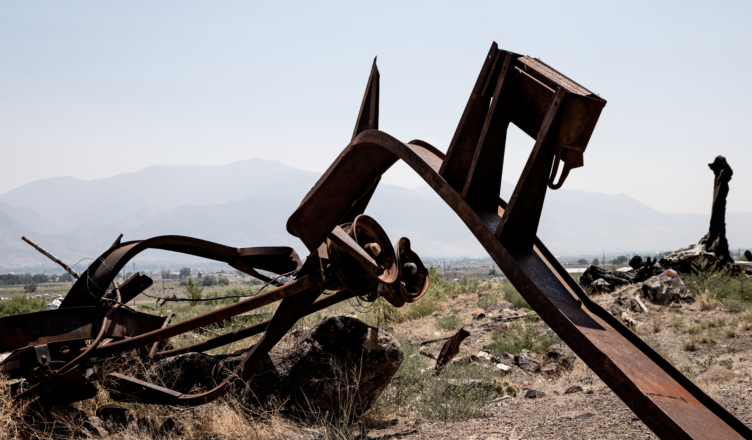 Nearly three years ago I was invited to speak on the question that animates this cluster of essays: “what does becoming undisciplined mean to you”? In response, I found myself thinking about art made from salvaged materials as a model for scholarship that not only collects ideas and materials from multiple disciplines but also advances to the boundary-crossing transformation of academic knowledge toward addressing longstanding and urgent problems. This analogy of salvage and un-disciplinarity spoke to an aspiration for humanistic scholars specifically to eschew individual originality and specialized vocabulary and to take part in the work of forming livable worlds. One reference point was Bruno Latour’s redefinition of the cultural critic: “not the one who debunks, but the one who assembles. . . . Not the one who lifts the rugs from under the feet of the naïve believers, but the one who offers the participants arenas in which to gather.”2 Another was the case for a sustainable humanities that Stephanie LeMenager and Stephanie Foote make in underscoring the merits of individual disciplines while calling for scholars, learning from artists and activists, to “produce sustainable artifacts and socialities—not just take apart the objects of our culture.”3

Returning to these provisional ideas of undisciplined work in the second spring of COVID-19 gave me pause. In particular, I was moved by an essay that Melanie Benson Taylor wrote during the pandemic as a time “limned by a shadow plague in the form of systemic racism and structural injustices.”4 Introducing essays to the journal PMLA under the heading “Indigenous Interruptions in the Anthropocene,” Taylor asks: “If it is increasingly clear that not all members of Anthropos are equal drivers of the Anthropocene, and that not all are uniformly compromised by its havoc, how can we begin to manufacture a communal will to redress it? . . . . And, for humanities and literary scholars confronting profound material, corporeal, and ecological trauma, what good does it do—as the Cherokee author Marilou Awiakta once put it—to ‘sling a poem at a dam’ (43)?”5

Taking seriously these entwined questions about anthropogenic climate crisis as an outcome of empire and extraction and about the affordances and failings of the humanities, I began to rethink the allure of salvage as a framework for becoming undisciplined.

In its first usage, salvage meant a payment to those who saved a ship’s cargo from “impending peril”: “property salved,” or the act of doing so.6 A word that enters English in the early seventeenth century, salvage is thus freighted with the violence of colonialism, slavery, and the Middle Passage. It is further freighted with the wars of the twentieth century. It is in 1918 that salvage thickens its meanings in English to include “the saving and collection of waste material” and “those who organized and carried out this collection.”7 And it is during World War I and World War II that we get the terms: salvage campaign, salvage collector, salvage dump, and salvage man. These etymologies produce wariness—wariness of an unbounded academic practice modeled on salvage, wariness of unmooring from the communities to which they belong the ideas and materials that my own work draws from and repurposes.

What would undisciplined scholarship entail, then, if its horizon was not strategic repurposing but, to quote Taylor, “radical reworlding”?8

Posing that question led me to deliberate on the work of Maite Zubiaurre and her nom de plume, Filomena Cruz. As part of Zubiaurre’s project Talking Trash, Cruz salvages “small trash and urban litter” on walks around where she lives and works in Los Angeles and turns them into found-object tiles that are shared as gifts with others.9 The individual tiles do not decouple their salvaged materials from their material histories and meanings. Together, they compose a mosaic that connects the receiver intimately to that which extractive capitalism expels as waste, and to the communities treated as wastelands. This art practice overlaps with a collaboration between Zubiaurre, filmmaker Kristy Guevara-Flanagan, and the group Águilas del Desierto to make known the lives of migrants who have died in Arizona’s southern desert and to document a network of volunteers who “carry out the solemn task” of searching for missing people on behalf of loved ones, and of recovering their remains.10

These projects of recovery call to mind composer Guillermo Galindo’s and photographer Richard Misrach’s decade-long project Border Cantos. Aimed at U.S. colonialism, Border Cantos seeks “to report on and transform the material artifacts of migrants: water bottles, clothing, backpacks, Border Patrol ‘drag tires,’ spent shotgun shells, ladders, and sections of the Border Wall itself.”11 The approach to this collaborative work turns senseless trash into meaningful, visceral knowledge. Performances recorded on instruments that Galindo crafts out of the salvaged artifacts are paired with photographs of a militarized border and desert borderland taken by Misrach. To view Misrach’s images while experiencing Galindo’s compositions is to witness the remains of people who have died, been detained, or disappeared crossing into the United States.

In sitting with these projects whose artistic practices and political commitments are organized around salvaging materials to recover and repair what Taylor calls “material, corporeal, and ecological trauma,” I am struck by how their creators open space for outsiders while remaining moored to the people and places whom the projects hope to make known. As a scholar drawn to the possibilities of salvage for transgressing academic boundaries toward imagining and contributing to more livable worlds, sitting with these projects is also to acknowledge what remains, what must remain, unsalvageable.

Allison Carruth is on the faculty at Princeton University, where she is Professor of American Studies and the High Meadows Environmental Institute. Her research interests include environmental narrative, media and art; science communication; contemporary food movements; and evolving relationships between technology, ecology and environmentalism in American culture. The author of Global Appetites: American Power and the Literature of Food, she is currently completing a book titled Novel Ecologies.