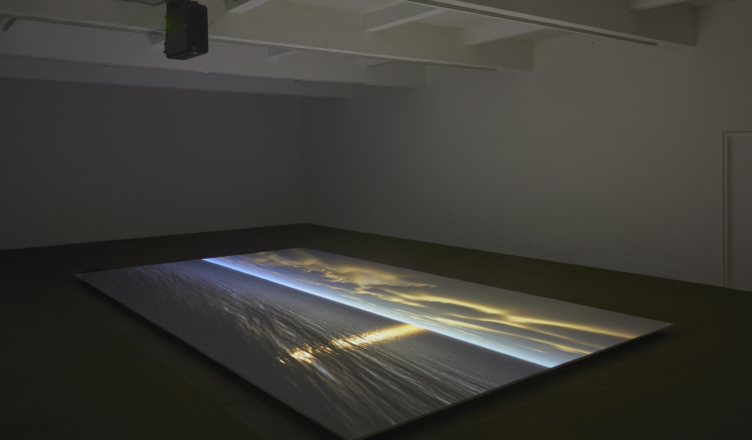 Rindon Johnson, Coeval Proposition #2: Last Year’s Atlantic, or You look really good, you look like you pretended like nothing ever happened, or a Weakening (2021). Installation view, Chisenhale Gallery, 2021. Commissioned and produced by Chisenhale Gallery, London, and SculptureCenter, New York, 2021. Courtesy the artist. Photo: Andy Keate.

Law of Large Numbers: Our Selves is Rindon Johnson’s first London solo show. Referring both to the application of a law in probability theory to finance as well as to the feminist classic Our Bodies, Ourselves,1 the show succeeds in setting a landscape (or rather, seascape) of uncertainties and instabilities in an authoritative manner. It affirms the radical potential of abstraction and sculptural gesture to connect an ecocritical attention to the planetary scale of climate change with a feminist, and especially transfeminist, attention to the body.

The show follows an earlier exhibition, Law of Large Numbers: Our Bodies, which ran at SculptureCenter in New York March 25–August 2, 202l, and featured five pieces. At Chisenhale Gallery, there are two. Respectively entitled Coeval Proposition #1: Tear Down so as to make flat with the ground, or The *Trans America Building DISMANTLE EVERYTHING (2021) and Coeval Proposition #2: Last Year’s Atlantic, or you look really good, you look like nothing ever happened, or a weakening (2021), the two pieces first appear to the viewer as unrelated to one another. But together, the two “propositions” question the historical processes that brought us to the contemporary moment—or, in Johnson’s words in the eponymous publication accompanying the exhibition, the “systemic generational hubris of those crap industrial, colonial ancestors, fellow humans, and selves” that we will all be victims of through the climate crisis.2 What can be (re)claimed when a name is changed? What happens when business as usual is challenged; what happens when the Gulf Stream slows down? Such are the questions that unfold throughout the show.

Coeval Proposition #1 responds to the first question of what happens when a name is changed. It is an enigmatic, graceful sculpture placed on the margins of the gallery space, floating outside on a pontoon by the Hertford Union canal. Its ebonized redwood beams echo the steely remnants of its industrial surroundings, almost blending in with the mess of broken windows and rusty beams of the dilapidated building adjacent to Chisenhale. Composed of two triangular structures, the smaller one placed face down inside the other, a ghost-like model of the Transamerica Pyramid, San Francisco’s landmark skyscraper (formerly the headquarters of the Transamerica insurance company), Coeval Proposition #1 is a tongue-in-cheek reclaiming of symbolic space for trans persons, and for the artist himself, as a Black trans man who is himself “from the unceded territories of the Ohlone people.”3

Coeval Proposition #1 is ripe with ironies. The title underlines the flattening out of the building (so much so that abstract sculptor David Smith comes to mind), which has been stripped bare. Dark brown instead of quartz-white, it puts Black contribution back into the U.S. economy. Ephemeral and unstable, the sculpture does not impose a monolithic monument, but cuts the grand paternalistic gesture of the Transamerica commissioner down to size.4 Floating in a formerly industrial canal that has been center stage for the gentrification of London’s East for decades now, Coeval Proposition #1 brings back the memory of other forms of architecture and urbanism: it was assembled from recycled redwood used to build water towers in New York City. Connecting the two cities, the triangular sculpture also acts as a metonymy for the triangular trade, the source of the U.K and the U.S.’s wealth.

Do not be tricked by Coeval Proposition #1’s unassuming shape: it contains multitudes, to borrow from Walt Whitman—starting with the will to “dismantle everything,” as the first step to a clean slate out of which new forms, meanings, and hopes may emerge. Yet Johnson is no high Modernist nostalgic; his idea of a monument favors the transient, the unstable (spatially and symbolically), and he walks the precarious line between a certain lightness in terms of tonality and ecopolitical awareness. Born out of a cyclical view of history that brings environmental impact into the history of forms, architecture, and urbanism, Coeval Proposition #1 reminds us that the wood from NYC’s first generations of water towers came from Northern California’s redwood forests. Mournful yet subtly defiant, the star-like sculpture asks what can be built out of a history of human and geological exploitation, once their legitimizing fictions have been brought down to the ground.

Meanwhile, Coeval Proposition #2 is a large video projected on a plinth on the floor. Majestically claiming the entire gallery space, glowing in the dark, it brings back distant memories of Luminist landscapes or seascapes; lasting an entire year, it also claims epic time.  Not so much Transamerican as Transatlantic, Coeval Proposition #2 was created when Johnson took the idea of his solo show taking place in two locations literally, and imagined it actually happening at the midpoint between the two. Coeval Proposition #2 presents the viewer with an 8.7 meter-wide projection of North Atlantic Ocean views of the spot at the center of a line between New York and London that Johnson drew on a map when he was figuring out the show. The moving images are not real-time captures, but instead computer-generated re-renderings of views of the specific spot in the Atlantic Ocean, from weather data such as the ones to be found on open access datasets like the U.S. Department of Commerce National Oceanic and Atmospheric Administration (NOAA). In collaboration with PARIAH Interactive, a Brooklyn-based game development studio, Johnson exploited the data that was gathered for that spot in the Ocean over 2020, the first year of the Covid-19 pandemic. As part of the subtitle, you look like nothing ever happened, suggests, the beauty of the yearlong moving seascape may seem oblivious to “what happened” in 2020.

But the gallery viewer is not invited to sit down and experience a soothing year-long meditation. The video is projected on the gallery floor, resting on an eleven-centimeter plinth, bringing the materiality of the video projection to the fore. Our gaze and body brought downwards, we cannot simply watch the images of the horizon line or of the churning waves shown from a bird’s eye view. The connection to sculpture appears through this simple gesture of displacement. Johnson gets our body moving, rather than standing still and erect in front of it. We are meant to take a dip in the pool of data—Proposition #2 is an indirect result of Johnson’s poetic use of the Virtual Reality (VR) camera, which he had dipped into water for a former artwork.5

As we engage in this re-rendering of 2020, we are induced to ask ourselves, in a constant back and forth between the past and the present, what indeed did happen over that year? (Here, the lack of data matters, too: throughout March 2020, there were no atmospheric and weather data, and the artist and the developers had to compose with such silence.6) Even more urgently, what is happening now? For Coeval Proposition #2 does not only make accessible to gallery-goers a distant, difficult to access area (in the way a photograph of a far-off land art piece would), but also gives visibility to the climate crisis. Indeed, as Johnson explains, the spot we are presented with, called the North Atlantic “cold blob,” is a mass of cold water poured out into the sea by the melting of the Greenland ice sheet, which slows down the Gulf Stream, with effects that partly remain to be known.7 As we watch the re-rendering of the colder waters of 2020 unraveling before our eyes, ice water keeps flowing into the ocean.

Although masquerading—or passing—as a neo-Luminist video seascape,8 Coeval Proposition #2 sets data art within the landscape of abstract art. The video is a visualization of data, an ongoing computer processing of recorded facts that have been abstracted for calculation or analysis purposes, so that we may look at “what has happened.” Except that it looks like it did not. At this point, Johnson’s proposition almost seems to cancel itself out, as if doubling down on the climate crisis as an object of denial (which it is). Yet, I would argue that the artist’s is no nihilist position, but rather a critically benevolent one.

Abstractions are needed to apprehend facts beyond our control, be they frightening like a storm, or terrifying and depressing like the climate crisis and the inaction of global leaders that has precipitated it. And symbolic reclaimings, as acts of benevolence, are needed. We are not in control, and we must live through it: this is what Johnson’s practice suggests, with a generosity of heart and a clarity of mind.

Vanina Géré is a Paris-based scholar who specializes in contemporary American art, with special interests in art and activism, feminist art history, African American Studies, painting and, since more recently, Internet studies and activism. An alumni of ENS-LYON (2004-2008), she is the author of Les Mauvais Sentiments: l’art de Kara Walker (2019). She has also worked extensively on the writings of Sarah Schulman. She writes art criticism, and currently teaches at Villa Arson National School of Fine Arts in Nice, France. She has often lectured on her fields of interests, and organized academic events on Black feminism and on feminist self-defense, and has collaborated in a number of academic publications, art journals, and exhibition catalogues. She is the editor of the upcoming October Files issue on Kara Walker (2022).