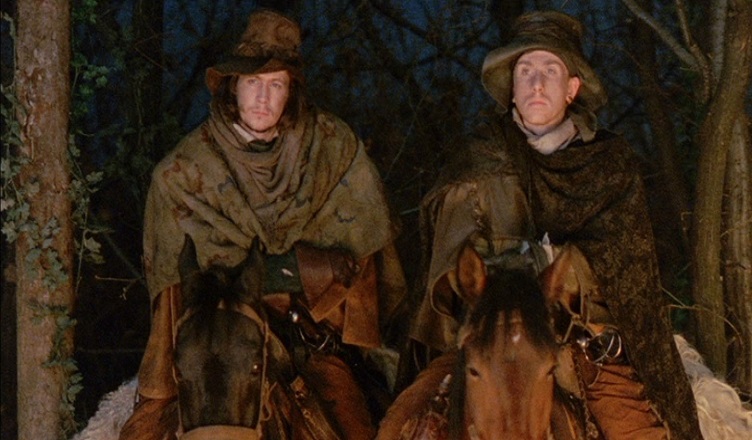 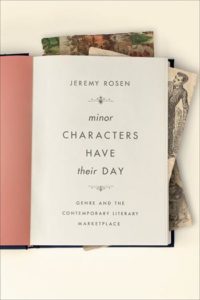 In Minor Characters Have Their Day, Jeremy Rosen analyzes the recent genre of what he calls “minor character elaboration”—narratives that borrow a minor character from a well-known literary work and retell the story from that character’s point of view. Rosen starts his account in 1966, a year that saw the publication of Jean Rhys’s retelling of Jane Eyre in Wide Sargasso Sea as well as the first production of Tom Stoppard’s Rosencrantz and Guildenstern are Dead. As his book progresses, Rosen enumerates an impressive and rather surprising number of works that fall within this genre—from John Gardner’s Grendel (1971) and J.M. Coetzee’s Foe (1986) through Margaret Atwood’s The Penelopiad (2005), Christopher Moore’s Fool (2009) and, of course, the musical Wicked (2003). In fact, Rosen’s appendix lists 63 such works since 1966. Minor Characters Have Their Day is impressive for the range of works that it draws together, from the explicitly literary works of Rhys and Stoppard to the fantasy of The Mists of Avalon (1983) and the parody of The Wind Done Gone (2001).

Rosen’s boldest and perhaps most controversial move is to theorize minor character elaboration as a genre. Drawing on work by Franco Moretti, John Frow, and Wai Chee Dimock, Rosen is eager to treat genre as “unfinished” and open to a variety of uses. But the particular nature of these works, which are quite numerous since the 1980s but had no name until Rosen’s book, raises the question of how an unrecognized genre functions. Frow’s Genre (2006), for example, places a great deal of emphasis on how genre works to frame expectations and guide interpretations. Frow cites Charles Briggs and Richard Bauman: “When discourse is linked to a particular genre, the process by which it is produced and received is mediated through its relationship with prior discourse. Unlike most examples of reported speech, however, the link is not made to isolated utterances, but to generalized or abstracted models of discourse production and reception” (52). Rosen is describing a genre that has existed without ever rising to the level of awareness as a distinct body of texts—either among critics or its readers. Rosen evokes Janice Radway on the way that genres work to satisfy reader demands, but readers of the romance or western are well aware of the outlines and nature of these genres—even if scholars might have neglected them. This does not seem to be the case with stories of minor character elaboration. What is gained by describing this minor character elaboration as a genre instead of, for example, simply a common narrative strategy? A good comparison might be the eighteenth and nineteenth-century “it” narratives that follow some object (such as a coin) as it circulates through a society. Should we see novels that adopt a particular strategy like this as genres in their own right, or is it better to position them within a larger genre—literary fiction in the case of Rhys, fantasy in the case of Bradley, and so on?

Although I would like to see these theoretical questions explored in more detail, it’s clear that Rosen is on to something. The way that this type of narrative has proliferated, especially in the last two decades, makes this a compelling book. Especially important is the attention that it gives to the market forces that would be easy to overlook in a more traditional, formalist study. He notes that genre in general is a way of “minimizing risk and targeting readerships, because ‘semi-programmed’ literature that follows a proven formula and appeals to a preexisting audience helps combat the uniqueness and hence unpredictable sales of any new book” (123). This is an astute observation, but I suspect that he could push it a bit further: whereas fans of science fiction or the romance novel are well aware that they are engaging with genre fiction, I suspect that part of the appeal of a novel like Fool is that it does not carry quite the same (negative) connotations. Works of minor character elaboration may get all of the benefits from genre—the immediate recognition, the connection to the familiar—while presenting themselves simply as “literature.” This is one place where Rosen’s emphasis on genre pays off in his analysis of these works, but this back-door appeal to audience expectations deserves fuller explanation in its own right.

We might also wonder about the boundaries that Rosen depends on in constructing minor character elaboration as a genre. He admits that these novels share many trans-textual strategies with other works that are not part of the minor character elaboration genre. He notes, for example, the way that Jasper Fforde’s Thursday Next series mixes characters and real-world people by theorizing a world in which characters can enter books through the Prose Portal (117). Rosen is, of course, right that The Eyre Affair is not an example of minor character elaboration, but it’s natural to ask how we might theorize the larger category to which all these works belong. Likewise, the way that fan fiction picks up well-known characters and retells or extends their stories–sometimes using main characters, but often with minor ones—is clearly related to the stories that fall within minor character elaboration. Rosen is correct to distinguish the sequel from the work being done in a retelling like Wicked, but it is clear that our contemporary fondness for fictional worlds that transcend individual works is relevant here. Transmedia franchises like Star Wars and the Marvel universe are powerful and distinctly contemporary configurations of storytelling based on the ability to separate character, world, and event from one particular text, and to extend, develop, and re-vision it through others. It is hard not to feel that there is a larger story here about changing attitudes towards narrative and character at work across storytelling practice, as well as narrative theorizing.1

Although Rosen does not emphasize it in this study, the self-consciously international quality of these minor character elaborations strikes me as an important component of this genre. Although there are many examples of nation-specific reworkings of an earlier work—The Wind Done Gone and many version of Moby-Dick are examples of this—the frequency with which The Odyssey, Aeneid, and Iliad are the objects of minor character elaboration makes clear that crossing national and historical boundaries is extremely common in these works. Pascale Casanova’s The World Republic of Letters is particularly relevant here, with its emphasis on the construction of “world literary space” that gathers together unlike authors. Casanova particularly reminds us that the construction of “world literature” is a very particular historical act, and it is one that Rosen’s account of minor character elaboration shows to be in full force in such cross-national, trans-historical borrowings. We might say that Minor Characters Have Their Day reflects the emergence of an international culture of world literature that softens national boundaries and historical specificity for the sake of an appeal to the universal. Rosen’s emphasis on the role of the risk-adverse market is quite appropriate here, but it seems to me that this is part of a larger construction of world literature about which there is more to say.

Indeed, what is striking about the emergence of this genre is not only that it is transnational, but that it has almost no relationship to a particular school of writing or theory of poetics. For all of their limitations, movements like OULIPO, L=A=N=G=U=A=G=E, or the Black Arts Movement developed methods of composition within a group of like-minded writers who were in dialogue with each other. Even outside of such self-consciously artistic movements, writers working within a given genre can be expected to know some of its history and tropes. Minor character elaboration, as a genre or strategy, emerges sporadically out of no such debate or theory. In some ways, it is like the broader category of “metafiction”—a trend in writing that is less a poetic theory and more a collection of textual moves adopted by a wide variety of relatively independent writers. It has now been thirty years since Andreas Huyssen described the 1960s as “the closing chapter in the tradition of avantgardism” (164) in After the Great Divide, but the integration between narrative innovation and market positioning in the novels Rosen discusses goes well beyond anything that Huyssens described. One way that we might think about minor character elaboration is as the kind of innovation that happens when writing is mediated by the marketplace rather than by the more traditional literary communities embodied in little magazines. Rosen’s observation about the way that market forces shape the appeal of this genre powerfully captures what we might think of as a post-avant-garde moment in writing.

In this review I have asked a lot of questions about Jeremy Rosen’s Minor Characters Have Their Day, but it is precisely these loose ends that make this book so compelling. This study is a valuable component of a larger inquiry into scholarship on contemporary character, transmedia storytelling, and the world literary market.

Daniel Punday is Professor and Head of the Department of English at Mississippi State University. He works in contemporary U.S. fiction, narrative theory, and digital media. He is currently the Vice President for the International Society for the Study of Narrative. His most recent book is Computing as Writing (Minnesota, 2015).