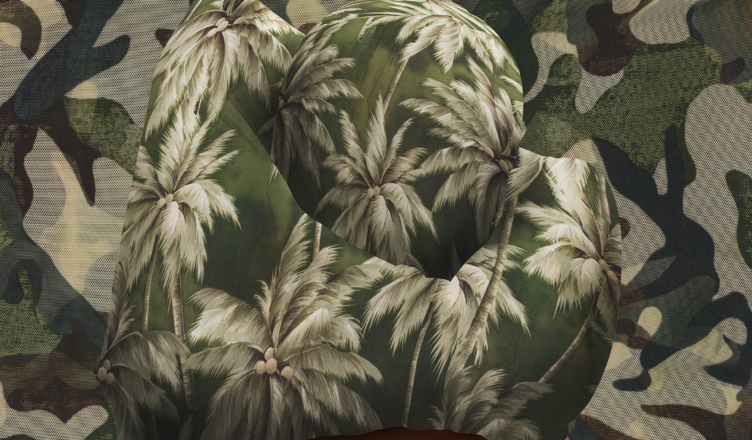 I hated marrón (brown) growing up. Marrón was the color of the pants in the uniform of the second school I attended from around age five until age ten, and it was also the color of the pants in the school I attended after that, until age seventeen. My uniform was marrón and yellow, initially, then marrón and cream. For many years, it was hard for me to wear any marrón. As a bottom color, there was the trauma of school: repetitiveness, uniformity, educational regime. I had to wear it every day for years, so I stayed away from it during my free time. As a top color, there was the imposition of tropicality, initially. “We wear light and vibrant colors under the Caribbean sun! Not depressing colors, like marrón or black.” Later on, this omission was dictated by the cartas de colores (color cards) trend: you would pay a consultation fee with a woman (usually) to come up with a list of colors and specific shades that were favored by your skin tone, especially for colors that would be placed adjacent to your face. This woman’s knowledge about color theory was presumably validated through her vast experience in interior design or with makeup.

I never went through the process myself, but my mom did, partly for herself and partly because she owned a clothing store and wanted to also be well-versed in how to prescribe colors to others. I remember a reiterated interest for her clients in getting their own carta de colores done was having a list of colors that would make them look lighter. Marrón was thus off the table, because, according to these theories, it didn’t make people with our skin tone look lighter; it made us look dull, somewhat dirty, perhaps even poor. Marrón only favored fair and light-skinned women, because their skin “naturally” contrasted with this color, like coffee and cream, like my Spanish school uniform.

There’s a gap between maroon and marrón; they’re similar but not the same. Maroon in English describes a dark, reddish brown, somewhat purplish. Or a brownish crimson or claret, somewhat subdued in spite of its elegant intensity, and universally accepted as “professional.” Marrón in Spanish is just brown. Any brown. And yet, in maroon’s specificity and brown’s lack thereof, maroon and marrón are closely intertwined. Maroon is derived from French marron, which means chestnut, itself derived from the Italian marrone meaning both chestnut and brown. The color maroon is not identified in either language by these words. It is instead grenaf and granata, respectively.

However, maroon, in the context of formerly enslaved people of African descent who escaped from slavery into nature and formed settlements away from colonial regimes, etymologically doesn’t have much to do with the color, except for the fact that both marrón and maroon can be used to describe the skin tone of the people who were associated with the act of marronage. The word maroon derives from the Spanish word cimarrón (which still stands as the Spanish translation of maroon in the emancipatory sense), a word initially used to describe feral cattle in Hispaniola and, afterwards, applied to the Taínos and then those of African descent who escaped slavery by running away. Besides meaning fugitive, this word was also used to signify wilderness, unruliness, and that which is uncivilized and uncultivated.

Like children, we often still think of a primal, simplified color palette when thinking of nature: brown for a tree trunk and soil, green for the bushy outline of a tree top’s foliate, and so on. Although there are many other ways to visualize nature, especially in non-tropical ecosystems, this is the dominant color palette in the mountains of Hispaniola where the first maroons of this hemisphere escaped. Perhaps the brown skin tone of the runaway indigenous people and people of African descent was advantageous for camouflaging in these brown and green surroundings in a way that, say, white people of light skin could not. Of course, camouflage alone did not guarantee our survival: a deep knowledge of the environment did. Maroon settlements were not “wild” or “uncultivated”: intentional and complex, symbiotic yet non-invasive approaches to nature sustained us back then and are still present to this day in our gardens and in our relationships to el monte. Imagine the subtlety and attention of traversing through foliage, forest, swamp, marshland, lowland, and mountains without leaving a trace of your having gone through them, if you don’t want to. Asking a plant permission to take some of its leaves, and the deep understanding of consent in this act, which stems from before, but is especially present after, experiencing the utmost absence of it.

Marrón feels so liberating now, so subtle, so nuanced, so intentional. It has lent me the power of camouflaging, of seeing without being seen, if I don’t want to. The respite and joy in opacity, “dullness,” if you wish.

Perhaps marrón is the most Caribbean color. The most tropical one.

It goes well with the sand and reflected under the undulating Caribbean blue. (It would certainly look great smeared over a tourist brochure!)

It goes well with the forest, with the infinite number of greens that have been violated in so many ways.

It specially goes well on brown skin. All shades of it. In between them, traversing their colonial separation, filling the gap between black and negra, being both at the same time.