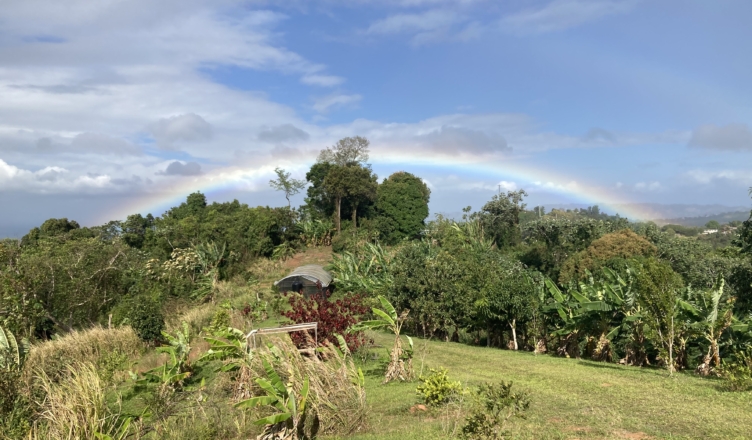 In the summers of my youth, my mom would send me to the Dominican Republic to connect with my family across the water. I would stay in the family home on the slopes of Loma de Coplin overlooking the Bay of Samaná. Every morning my grandmother would ask, “¿Quieres té o café? (do you want tea or coffee?). She knew the answer, but it was her way of getting me to chat as she extracted and shared small doses of information and gossip. I always chose tea, which she would make from the herbs she collected in her garden. Each time, it was a different combination of herbs, always over-sweetened: a morning sugar boost.

Her name was Maria Altagracia Coplin, named after her patron Saint. She was a descendant of African American and Cuban immigrants to the region of Samaná in the early 1800s. She learned what she knew about herbalism and healing from her mother Chonga, who had learned from her mother before and who were parteras (midwives) in the town of Santa Barbara de Samaná. In addition to the teas, she would make mejunjes (concoctions) and baños (baths) that benefitted the body, protected the spirit, and relied on deep knowledge of local plants and thus the soil and other elements of the natural world. Passed from one generation to the next, this ancestral knowledge was a mixture of African, Indigenous, and European practices. Depending on the ailment, there was always a plant that could be found either in her backyard or in one of the neighbors’ homes. She could tell you what home to visit depending on your ailment and who in the town had the most powerful concoctions in lieu of visiting the local hospital. My young mind didn’t pay much attention to this knowledge at the time. I trusted her, opened my mouth, and consumed whatever she said would help.

Her yard was small and surrounded by a barbed wire fence that delineated the limits of her realm. Within the confines, one would find an immense number of herbs, vegetables, and fruits that were used daily to sustain the family diet and that were shared with many of the neighbors. A larger conuco (farm plot) on the outskirts of the town, provided additional land to plant larger staple items like yuca, yautía, plantains, and bananas. The initial abundance of land provided many Samaneses to openly claim, “we may be poor, but here, we will never starve.” Though other basic needs were not being met, this statement denotes the abundance of food in the region. It was not government programs that would feed the neighbors, but the mutual aid provided by families through their access to land and through their everyday practices of engaging with it. Like many Caribbean yards, my grandmother’s patio was her haven, a space to create, as well as to connect her past to her present, and to reflect on a future that seemed disconnected from that memory.

After a prolonged absence from the Caribbean, I yearned to have a space to work with the land. This same free labor that was required of me when I was younger was now something I missed. Living in an urban area, I had little access to open space to grow some food. I used closets, windowsills, fire escapes, rooftops, and designated spaces in community gardens. On Hancock St. in Bushwick, Brooklyn, I planted  a small garden where a large slab of cement was missing in the sidewalk. I filled the small square with tomatoes, peppers, basil, and the star of the show: okra. She towered above all the other plants, with her beautiful yellow flowers atop of her green stalks, filled with pods that were picked by the neighbors on the street. Many people would stop to observe the garden and the conversation tended to drift to the different names we had for okra: molondron, quimbombo, and so on. These street side encounters incited memories of many Caribbean childhoods, and often proceeded to a brief chat about the myriad of ways to cook and savor it.

An incredible opportunity emerged in 2015 to purchase a five-acre plot of land in the mountains overlooking the town of Mayaguez, Puerto Rico, where I was born. The view was what drew me in. I could see the valley below as it touched the coastline and converted into the blue Caribbean sea. When I purchased the land and began the farm project, I knew little of what I was getting into, and yet it felt so familiar. This was an opportunity to once again become rooted in the Caribbean after long years of back and forth between education and jobs.

One of the bendiciones (blessings) of the pandemic has been virtual teaching. No longer required to be in that urban space, my partner and I made the move back to the Caribbean to live on the farm. While many people have been shuttered indoors during this pandemic, my connection to the land has only been strengthened over the last eight months in the Palenque. It is a different rhythm of life, a cacophony of sounds, a myriad variety of smells, and tranquil views of a tropical landscape. I began expanding the production of food, creating an inventory of trees and ensuring that the farm contained one of each of the multiple tropical species that thrive in the red oxisol soils. I engaged with others around techniques, which forced me to rethink what is necessary to sustain oneself in the tropics. I have thus become immersed in planting abundantly, saving seeds, and learning to be patient. Sometimes I weep from both joy and sorrow as some plants reach for the sky and others fail to grow. I have learned to fail and try again, developing calluses on my hands from the days’ labor. Those tears connect to the rain, to the water, to the spirits, and to the ancestors who whisper in my ear to speak to the plants, to caress them, to use them to heal, to feed, to share. I have become a privileged farmer who does not need to sell my products, and thus my working the land is about life. These moments have also served to inspire my intellectual process, including redirecting future research, strengthening my teaching, and promoting visions of communion.

From the farm, I peer at where the land meets the ocean. I revel in the rise and setting of the sun and the majestic palate of colors it forms in the sky, marking the start and end to the workday. The sounds, sights and scents of spring are all around, overwhelming the senses and simultaneously bringing peace. It reminds me of my childhood, but it also signals a future that many of us seek, of leaving behind the things we are accustomed to striving towards to find pleasure in the smallest of experiences while living off the land, relying on the sun for energy, and the rainfall for water. From the farm, I can admit the limits of my knowledge, make mistakes, scream into the world, and be humbled by the power of nature.

I have taken up using mint, lemongrass, and soursop leaves to make tea and other concoctions to share with others. I brew beer, distill molasses, and make bottles of bay rum for daily ailments. As I continue in the legacy of my grandmother and other ancestors, I can hear them whispering in my ear as my hands massage the herbs that they introduced me to. This is my version of marronage: a Black man who escaped urban labor regimes and retreated to the countryside, fending for myself, and living in cooperation with the elements and nature. To have this space, to grow, and feed myself and those I care for from the crops is perhaps one of the most gratifying acts. Thus, as a quest for liberation, it seems necessary to be able to disconnect from the larger structures of capitalist control, to prioritize in one’s health and wellbeing, and to create something anew from the ashes of the ancestral memories.

Let sit for a few days at room temperature and then place in the fridge. Mix up and take two spoonful’s daily.

Dr. Ryan Mann-Hamilton is Assistant Professor in the Social Science Department at CUNY LaGuardia and teaches a variety of courses in Anthropology, Music and Latin American and Caribbean studies. Dr. Mann-Hamilton has extensive experience working on land and marine based conservation projects and supporting and participating in food sovereignty projects in the Caribbean, and environmental justice activism in the context of the Americas. Additionally, he was a founding member of the AfroLatin@ Forum and the activist collective We are All Dominican. He is currently the faculty Co-Leader of the Presidents Society Environment Program and was also selected as Faculty Lead by the Center for the Humanities at the Graduate Center to direct a two-year public engagement program focusing on the relationship between race, environment and the humanities that will center the experiences and existing networks between communities in New York and those in the Caribbean. He has extensive experience in public programming, environmental consulting and curriculum development. His most recent publication was a chapter on community centered fisheries conservation and education programs that were developed in the Dominican Republic and the Bahamas and the lessons learned from that endeavor.