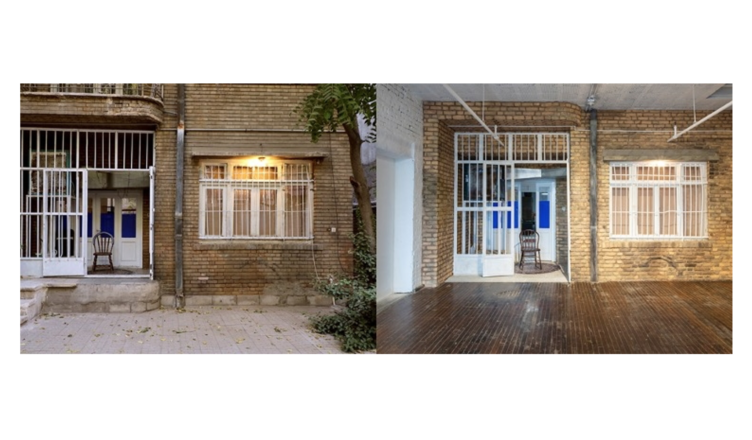 I imagined that sitting on my cousin’s familiar IKEA sofa in Pittsburgh would feel simultaneously uncanny and entirely mundane. I last sat on Sohrab’s sofa in Tehran in December 2016, bewildered by the thought of it making its way into heavily sanctioned Iran. A black market of affordable Swedish furniture? I wondered, immediately before Sohrab provided a complex Venn diagram of an explanation of the official and unofficial markets that accompany life under sanctions. Through an innovative and unlikely 2019 art exhibition at Pittsburgh’s Mattress Factory, the IKEA sofa again destabilized my sense of space—though this time I had the company of American art audiences.

The Other Apartment opened in September 2019 as the latest collaboration between Jon Rubin, Professor of Art at Carnegie Mellon, and Sohrab Kashani, a Tehran-based multimedia artist and curator, in which the artists painstakingly constructed an exact replica of Sohrab’s apartment. The Other Apartment presented a kind of dual reality in which Americans and Iranians are connected despite their geographic distance and a highly charged geopolitical context. For the exhibition, Jon and Sohrab sought to reveal commonalities between Americans and Iranians, a theme that has emerged as a hallmark of their longtime collaboration. From 2010-17, Sohrab ran the Tehran side of Jon and artist Dawn Weleski’s Conflict Kitchen, a project that featured a downtown Pittsburgh restaurant that served up cuisine and cultural programming inspired by nations with which the U.S. is in conflict, including Cuba, Palestine, Venezuela, North Korea, and Iran. For the Iran series, Kubideh Kitchen (2010), Sohrab organized synchronous virtual events at Sazmanab in which local guests gathered to share an Iranian kabab kubideh dish and conversation with the Pittsburgh restaurant’s patrons via Skype. Jon and Sohrab later worked on The Foreigner (2013), another social practice art project in which Americans in museums or libraries could meet and speak with Sohrab through a U.S.-based avatar who communicated with him through headphones.

While Jon and Sohrab sought to create connections across distance with these previous works, they seemingly collapsed distance entirely with The Other Apartment. Despite their generational difference, with Jon as the more senior of the two, the artists had bonded over their strikingly similar tastes in American sitcoms and initially proposed to use their prestigious Creative Capital grant to produce a sitcom about a family who would be portrayed by actors in Iran and the U.S. using identical film sets to present a kind of parallel reality. Jon and Sohrab’s ideas evolved as they realized that they were most fascinated by creating a shared physical environment. But instead of designing film sets for actors, the artists envisioned a shared living space that Iranians and Americans could experience in an interactive and unscripted way. Sohrab’s apartment would be a rich subject because of his history of hosting events at home and the potential for an appearance there by his alter ego, the anti-hero performance art character named Super Sohrab. Once Jon and Sohrab settled on this vision, Sohrab carefully scanned every item in his apartment while Jon oversaw a team of fabricators and builders who recreated the details over a four-month period: the outer brick wall of the edifice, a bathroom with decorated ceramic tiles and Iranian style outlets, a radiator typical of older Tehran apartments made from wood, and Persian carpets made from digital print on fabric. They even searched Ebay to find a plastic balancing bird toy that looked exactly like the one my mother gifted to Sohrab years before. Every aspect of The Other Apartment appeared exactly as in the Tehran apartment.

In the abandon of those waning pre-pandemic days, I fingered through the mementos I found in Sohrab’s library, like laminated name tag lanyards collected from a host of international art events and family photos from the 1990s featuring Sohrab with my aunt and uncle. On the bookshelf I eyed a monograph about Iranian modern artist Monir Farmanfarmaian that a gallerist gave to us on our 2015 research trip to Dubai’s Alserkal Avenue arts district. I thought about my own copy of the book, with its roughly textured cover, back in my Southern California apartment, as I leaned in to see—and then feel—that this “book” was in fact printed on a wood block. The act of touching paper brochures that Sohrab collected from various international art fairs reminded me of the first time I became aware of his existence when we were children. Upon returning from a trip to Iran, my father delivered handmade gifts from my cousin living half a world away: small pieces of pastel-colored paper cut into various shapes upon which Sohrab signed his name in Latin characters. The substance and form of the paper cut-outs in my small hand served as my first connection to my cousin. In late 2019 Pittsburgh, the physicality of The Other Apartment opened a conduit to Sohrab and Iran and then, as Jon once noted, to Sohrab’s vantage point of the world.1 But now the private experience felt peculiarly public as my worlds folded, impossibly, into shared time and space.

Sharing the most banal and personal details of a young Iranian man’s life in Pittsburgh underlined the absurdity of his absence. Why couldn’t he be here for the exhibition of his own apartment… to just hang out like anyone else? The Other Apartment provoked such questions by rejecting didacticism, as its curators preferred not to dictate the political stakes of the project nor provide a history lesson on U.S.-Iran relations. Visitors first related to the extremely specific human experience of Sohrab’s home life and could subsequently relate to the various social constructs surrounding the exhibition, given whatever prior knowledge or biases they may have had. The experiment in cross-cultural connections responded to a particularly tumultuous moment, as by late 2019 U.S.-Iran relations had come to a breaking point. On May 8, 2018, the U.S., led by President Trump, abandoned the Joint Comprehensive Plan of Action, better known as the Iran Nuclear Deal, resulting in increased sanctions that restricted every aspect of Iranian life, from access to life saving medicines to the ability to move freely outside of the country. Despite Sohrab’s inability to travel to the U.S., he and Jon circumvented the political realities to create a space where ordinary Americans and Iranians could casually relate to one another. Sohrab welcomed the public into his apartment on the Tehran side, and attendees of both spaces could sit on the furniture and enjoy synchronous programming made possible through the same video technology the artists used in Conflict Kitchen.

For the first program, The Voice-Over (in three parts), Jon and Sohrab screened video art featuring extradiagetic narrative created by American and Iranian artists. With the second program, The Silence, Jon and Sohrab took a more improvisational turn in in their work in response to an incident in which the Mexican band Para Decir Adios left a cassette tape of their Spanish language songs in The Other Apartment without explanation. Jon and Sohrab invited local musicians in Pittsburgh and Tehran into the apartments to perform and record the songs using English and Persian translations.

Midway through planning The Silence, COVID-19 became the new global reality, and Americans and Iranians alike were told to stay home. The irony was not lost on Jon and Sohrab, who were forced to modify programming for an exhibition about domestic space, physical presence, and absence. For all its accompanying tragedy, the interruption of the pandemic also proved to be unexpectedly generative for Jon and Sohrab, who found a productive way to cope in their third and final program, Where Shall We Go Today? They worked around the intermittent periods of closure and limited reopenings of the Mattress Factory by inviting a small number of local healers and teachers, including a therapist, dance instructor, Tai chi master, and voice instructor, into The Other Apartment to help Sohrab manage his anxiety while he quarantined at home in Tehran. Video of these exchanges show Sohrab dancing, laughing, detailing his mental health, and learning specific therapeutic strategies to overcome his obsessive tendencies. One can also see that Sohrab and each of the visitors to The Other Apartment sat opposite each other in their respective identical rooms to give the sense that they were sharing space as they connected virtually through video call.

The exchanges between Sohrab and The Other Apartment’s participants in this final program most clearly revealed the ways in which COVID-19 shifted the dynamic of the relationship between Iranians and Americans. Jon and Sohrab’s social practice projects historically created space for mutual exchange and open dialogue in the context of a fundamental unevenness in terms of the relationship between Iranians and Americans. Iranians grow up on American media, film and television, indeed, sitcoms, and even American history while the opposite is generally not true. Americans consequently know less about Iranians and this biases the direction of the knowledge flow that occurs through such exchanges, as is evident in the programming for Jon and Sohrab’s previous collaborations. It was Iranian and not American cuisine that Sazmanab and Conflict Kitchen guests ate, after all. While some political analysts speculated that the pandemic would be the great equalizer, of course that did not come to fruition, as Iranians and many others in the world experienced—and still experience—the disadvantaged side of vaccine inequity. Rich nations receive sixteen times more COVID-19 vaccine per person, according to a Financial Times Data Analysis compiled by UNICEF. Iranians, notably, suffered through the worst coronavirus outbreak in the Middle East and a particularly slow vaccine rollout which has been attributed to a variety of factors ranging from governmental mismanagement to U.S. sanctions.

Despite the disparities, the pandemic created a shared global trauma through universal experiences of quarantine, fear of illness, and death. In The Other Apartment, this global trauma is localized in the exhibition space in the manner of site-specific art. Art historian Miwon Kwon writes, “Sometimes at the cost of a semantic slippage between content and site, [other] artists who are [similarly] engaged in site-oriented projects, operating with multiple definitions of the site, in the end find their ‘locational’ anchor in the discursive realm.”2 The pandemic’s crisis discourse emerged as one such important locational anchor of The Other Apartment, as the duplication of Sohrab’s Tehran apartment in Pittsburgh coincided with a cultural moment in which ‘the home’ took on new significance as sanctuary and space of healing. The pandemic served as important subtext for The Other Apartment’s interlocutors, made legible through the project’s shared, identical domestic environment. Through the exhibition, Here became There and There became Here, distorting the geographical and ideological distance between urban poles and providing the participants’ exchanges with a newfound reciprocity. Within the context of the new shared reality embodied in the physical space of The Other Apartment, Sohrab and the Pittsburgh visitors could drop political context. They would forget about well-intentioned yet uninformed questions about what it’s like there? Does Iran have contemporary art? They could simply look around the room they shared and ask: Where shall we go today?

Deanna Kashani holds a PhD in Visual Studies from the University of California, Irvine and a BA in History from Brown University. She currently teaches in the Department of Art & Design at California State University San Bernardino. Her activities include community organizing, museum and exhibition work, field research in Iran and the United Arab Emirates, in addition to her role as an educator. Her recent scholarly work is featured in the International Journal of Islamic Architecture and in Contemporary Iranian Photography: Five Perspectives, edited by Abbas Daneshvari.