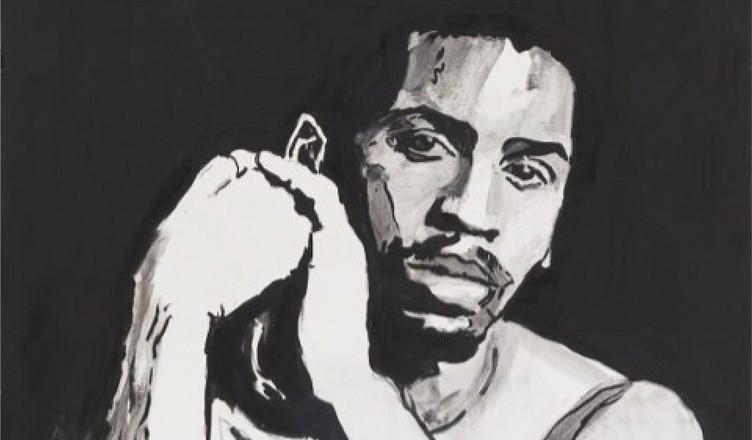 Darrel Ellis, the newly published monograph on Darrel Ellis’s work, from Visual AIDS, is a watershed moment for the artist. Ellis, who worked as a painter and photographer in New York City and died of AIDS at the age of 33 in 1992, has not received much critical and institutional attention since his death. Darrel Ellis is not only the first book devoted to his work since 1996, it is also an indispensable collection of scholarship, history, interviews, and stunning reproductions of the artist’s oeuvre. The impressive essays by Derek Conrad Murray and Tiana Reid, a description of the artist’s archive by Steven G. Fullwood, an eye-opening interview with the artist from 1991, and a thought-provoking conversation between contemporary artists will lift the shroud of mystery that has surrounded Ellis’s life and art. While Ellis certainly wasn’t obscure, he did not attain the same recognition as some of his contemporaries such as Lyle Ashton Harris, Félix González-Torres, and Marlon Riggs. Readers will be introduced to Ellis’s haunting lens work, his intimate paintings, powerful self-portraits, and his complex exploration of Black and queer life in America during the late twentieth century.

Given the lack of information on Ellis, Darrel Ellis is indispensable for its detailed account of the artist’s life. A few of these biographical details are important for thinking about Ellis’s practice since his work explores the potential and limits of connecting with his family’s history. Ellis was born in Harlem, NYC in 1958 only a few months after his father, Thomas Ellis, was tragically murdered by two police officers. Thomas Ellis was himself an artist; his practice centered on producing exquisitely composed photographs of his family (many of which are reproduced in the book). After his mother, Jean, gave him his father’s photographic negatives in the early 1980s, the younger Ellis used the bequeathed images as models and source material for drawings and paintings throughout his career.

In 1987, Ellis developed a technique that allowed him to create the distorted images for which he is known. With a photographic enlarger, he projected his father’s photographs onto sculptural reliefs which made them appear warped and distorted (imagine, for instance, the way a film projection would wrap around a person’s body if they walked in front of the projector). Then, from varying angles, he took photographs of the results. Through his methods and content, Ellis participates in a larger tradition of Black artistic production that complicates the problematic history of photographing and printing images of Black bodies. For example, Ellis’s Untitled (Mother and Laure) (1990), which depicts the artist’s faceless mother and sister looking at one another, bears visual and political similarities to the work of his contemporaries. The fragmented impression of the depicted bodies recalls David Hammons’s influential Body Prints from the 1960-1970s while the domestic focus between mother and child mirrors the Kitchen Table Series that Carrie Mae Weems produced during the early 1990s. What all of these artists accomplish is a recording of Black life at a historical and personal level while also never fully giving their experience over to the viewer—an effort made clear in Ellis’s use of his family’s archive and effacement of those images.

Each essay in Darrell Ellis examines the ways Ellis negotiated his multidimensional identity against the socially and politically turbulent landscape of the US in the late 1980s/early 1990s. In an astonishing essay on the aesthetics of Ellis’s work, Derek Conrad Murray notes that his “artworks have an opacity, and a fragmentary quality reflective of his rather ambivalent attitudes toward his identity, or perhaps more accurately, a desire to resist the limitations often imposed by being Black and gay in an intolerant society” (13). Nonetheless, as a Black gay man, Ellis was deeply attuned to the ways these facets of his identity marked him. In Untitled (Self Portrait) (ca. 1990-91), for example, Murray notes that Ellis’s pose and faint application of ink “clearly addresses itself to that which is projected onto him—namely, in this case, the sense of his social standing and worth relative to his AIDS-related changes in appearance” (14). A similar expression of self-awareness occurs in Self-Portrait after Photograph by Robert Mapplethorpe (1990), a piece that is especially pertinent for exploring the separation between a photographer and their subject given Mapplethorpe’s racist fetishization of Black men’s bodies. Here, Ellis reduces his mark-making to what Murray describes as “painterly simplicity,” giving the viewer just enough information to recognize his visage while the “quality of interiority and self-reflection is heightened” (18). Tiana Reid’s brief text also examines the question of changing appearances in Ellis’s self-portraiture. Focusing on Untitled (Self-Portrait after Allen Frame) (ca. 1990), which is part of a series in which the artist distorted a photograph of him taken by Frame, Reid argues that Ellis’s self-effacement complicates the idea that one’s face encapsulates a person’s identity. Instead, Ellis creates an “absent presence” by removing his face to suggest that the self is “fractured and fragmented,” formed at the “site of improvisation” that corresponds with the chance nature of the artist’s photographic methods (25). As Murray and Reid’s writings attest, Ellis understood selfhood as a processual phenomenon that could be evoked but never captured in photography and painting.

Darrel Ellis provides a detailed account, diagrams, and examples of how Ellis achieved his photo-manipulations. In the book’s roundtable interview, the artist Alanna Fields notes that “Ellis’s abstract approach to re-representing his photographs is a way of visually speaking about the complications of memory, right? Photographs of photographs are serving as proof of existence, or that something happened” (127). Indeed, the metatextuality of Ellis’s images have a palimpsestic quality. On the one hand, they document the existence of his father’s photographs; on the other, they acknowledge the sense of disconnect Ellis had from both his father and the people in the original images. Interestingly, Ellis’s technique of projecting his father’s negatives onto a sculptural surface and then photographing the distortions means that his father’s work is left entirely intact—no matter how distorted the younger artist’s images are, the originals remain exactly the way he received them since they are only projected onto a surface that is then photographed. Given that Ellis never knew his father personally, there is something unsettling and moving about this divide between the pristine negative and the warped positive. It is as if the artist is sharing with the viewer what he can only dream about when it comes to his family—moments that he can describe, but with certain details unclear, missing, or adrift.

Ellis would surely reject the idea that a monograph could accurately encapsulate an artist’s life and practice. As his work so beautifully suggests, he wouldn’t want that. For him, it is what has slipped through the cracks that makes history, memory, and personhood rich for exploration. He did this with his own family’s history, and now Visual AIDS supports that effort by offering this necessary text about an artist whose work will continue to evade us. And because of that, we’ll keep looking.