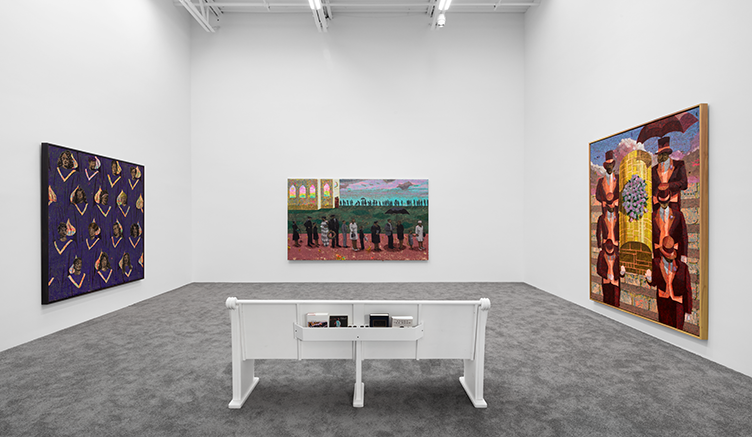 “You need an ego,” Derek Fordjour told an interviewer as he prepared SELF MUST DIE, his recent show at the Petzel Gallery, New York. “But,” he added, “you also need to release it.” This may seem like the perennially difficult ethical task of needing to balance one’s sense of self with an empathetic connection to the broader world. But Fordjour’s show gives the broad theme a harrowing twist as it pursues its meaning in the wake of the relentless state murders of Black people in the United States.  What does it mean to say that one must both have and overcome an ego in the context of a world that denies to so many not only one’s identity, but their very life? Fordjour’s work is a reminder of the power of art to grapple with such philosophical themes, and a testament to the fact that there can be no profound wisdom about life if we do not understand ideas as embedded within and emerging from the complexity of our social conditions.

These themes are present in Fordjour’s intricate method for his paintings. With the visible help of assistants—something he is more upfront about than some other artists—he painstakingly constructs layered canvasses that combine layers of cardboard and newspaper with acrylic, charcoal, and pastel. The final images we see are a combination of the top layer of paints and the cuts that reveal the colors and patterns underneath. In the form of the work, we thus see how the surface reality of the image is the result of layers of history—ones that are the products of both care and cutting. Moreover, we see how the total image is the product of each small cut and act of layering. It is a pointillism formed of social relations.

The content of the images showcases a spectrum of passions: pallbearers draped in and surrounded by exuberant colors, shining pastel stained-glass windows alight in the background of a somber funeral procession, an ebullient figure navigates his movements between puppet-like strings, powerful purples and shades of pastel give passion to women in mourning. Across the large-scale paintings viewers bear witness to both the glory of Black life and the pain of Black death. To properly do so, the integrated and layered canvasses intimate, is to refuse to see life and death as separate. A philosophical tradition that goes back to at least Socrates holds that to know how to live is to know how to die. Socrates is able to live well because he does not fear death. At many moments in history, this individual work of preparation is excessively imposed on entire groups of people who face a greater threat than others. This sometimes leads to collective practices for working through the entwinement of life and death. Fordjour gestures to this in the press release to the show, where he chose to insert these lines from Christina Sharpe’s In the Wake: On Blackness and Being:

What does it look like, entail and mean to attend to, care for, comfort, and defend, those already dead, those dying and those living lives consigned to the possibility of always-imminent death, life lived in the presence of death…It means work. It is work: hard emotional, physical and intellectual work that demands vigilant attendance to the needs of the dying, to ease their way, and also to the needs of the living.

Fordjour’s intricate canvasses, embedding both pain and care, both life and death, both triumph and dismay, offer themselves as both witness to and enactment of this labor of looking like, entailing, and meaning. 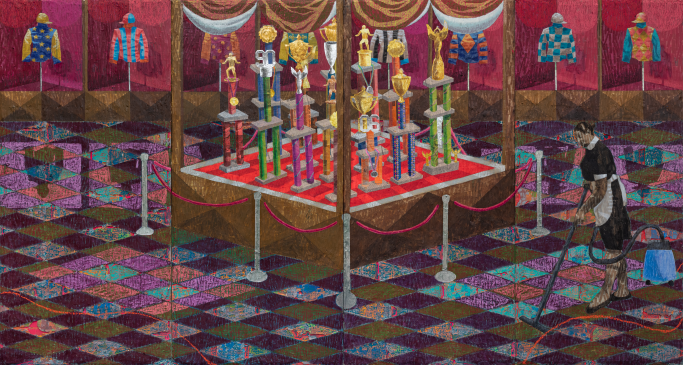 One common way to transcend the condition of imposed death is to achieve fame. Even if the lived self must die, the name and notoriety may linger on. Fordjour, even in his moment of great success, remains wary of this path. In his interviews and reflections, he explicitly rejects success as the fulfillment of meaning. Asked by an interviewer if Jay-Z and Beyoncé buying his work at a Frieze art fair changed anything for him, he responded, without hesitation, no. This is a consequence, he says, of achieving success late enough in life to know that it alone does not secure meaning. As he says elsewhere, “I recognize that I’m an artist in society, and when society goes and moves in another direction I’ve still got to be rooted in what I’m doing.”

This is not a romantic vision of the artist pursuing their craft regardless of the wishes of their patrons. It is a statement, as in the title of one of the show’s most striking paintings, of The Futility of Achievement. In this bright pastel work, we see a trophy case brimming with victories and a suite of cases displaying the empty clothing of, perhaps, designers or athletes or artists. In the foreground right, a lone figure appears in muted blacks, browns, whites, and grays. This is a cleaning woman vacuuming around the trophies without looking at them. Her disinterest could signify the futility of achievement—in that she just doesn’t care—or the futility could be more social, in that the painting registers how the achievements of some may not remove the unequal labor of others. There is nothing wrong, of course, with doing domestic work when it is cooperatively managed and well-compensated. But in a world that is so obsessed with particular selves and their personal achievements, it is difficult to create a society that rewards all labor in this way.

The futility of thinking about achievement in individualist terms is again underscored by the materiality of the works. The woman is not separate from the success around her. She is literally embedded in it through the cardboard construction, just as in life there can be no triumph of the individual without the work of the many. Fordjour’s image teaches us to appreciate the gifts of whatever talents we have received, but to understand that they don’t equate to you, to your self’s achievement. Because who you are is made up of others, as the paintings are, as the themes are. Here I think is the final twist on the show’s title (“self must die”): even the achievement of the overcoming of self is futile, because a person who has overcome their ego still has to act in a world that recognizes one. The social self that dies will inevitably be reborn as part of the world made by others. The task, then, is not just getting over oneself, but also learning what to do after. Fordjour’s canvasses enjoin us to be like them: to appreciate that we are made of layers of connections, no individual node of which has any more right to decency and care than any other.

Avram Alpert teaches writing at Princeton University. He is the author of Global Origins of the Modern Self, from Montaigne to Suzuki, as well as two forthcoming books: A Partial Enlightenment: What Modern Literature and Buddhism Can Teach Us About Living Well Without Perfection and Against Greatness: The Case for the Good-Enough Life. He is also coeditor of Shifter magazine and has written cultural criticism for outlets including Aeon, the New York Times, the Washington Post, the Brooklyn Rail, and Truthout.