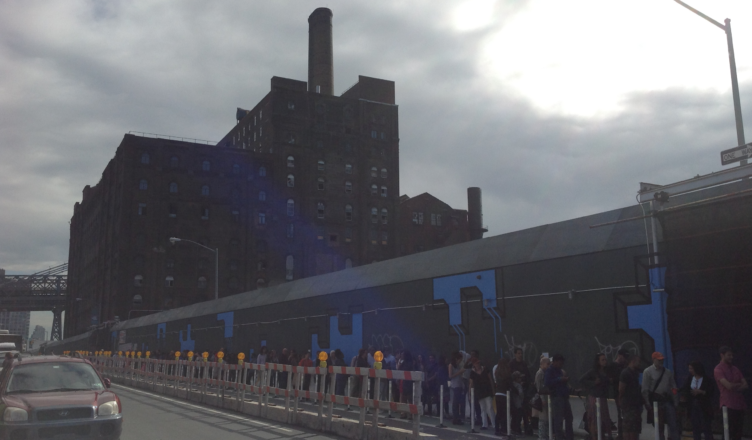 Line to the Kara Walker installation at the former Domino Sugar refinery in June 2014, soon to be turned into luxury condos in post-industrial Williamsburg. Photo courtesy the author.

The ultimate book on cultural appropriation is out, but you won’t find it if you enter those keywords into your search engine: Grégory Pierrot’s new book is entitled Decolonize That! Decolonize Hipsters. It launches the collection Decolonize That!, a series of essays edited by Bhakti Shringarpure, titled after the webinar she co-teaches with Pierrot at the University of Connecticut—Stamford (the next issue, Decolonize Museums by Shimrit Lee, just came out in July). If it seems anachronistic to bring up the figure of the hipster now, when hipsterish cultural items and practices have become mainstream and industrialized (think cold-press juice chains), as the editor and author are aware, one must only consider that many features of hipster culture are neatly aligned with the mentality of the far rights of the world: that combination of irony and nostalgia; the idea that racist and/or sexist so-called humor is politically transgressive (when it reinforces the status quo), among others. For Pierrot, writing self-consciously and self-critically from the perspective of a Black and revolutionary Haitian literature specialist, hipsterdom is no other than a form of colonization—and not just metaphorically. To make its case, Decolonize Hipsters evinces an encyclopedic eclecticism in terms of music and popular culture and an impressive mix of historical, literary and musical erudition, all with a knack at showing how the devil (neo-fascism) lies in the fashion detail (the undercut). In particular, Decolonize Hipsters narrates the cultural history of hip and style throughout Transatlantic modern capitalism based on chattel slavery. Fiercely antifascist, Pierrot’s free-flowing style, which echoes Amiri Baraka’s or Greg Tate’s (Pierrot is the President of the Amiri Baraka Society), succeeds in making this serious amount of erudition accessible. As such, the book is a literary tour de force.

The book opens with Pierrot’s personal account of his travels to Portland, Oregon, a city that had become a symbol of hipsterdom and counterculture by the 1990s, and that Pierrot dreamed about from afar as he was growing up in France. At a “very Portland” event of birdwatching, Pierrot realizes that he is the only Black person around—the flyboy in the buttermilk, to borrow these terms from Greg Tate.1 Pondering over how a place with such progressive credentials could be so lily-white, Pierrot sets out to deconstruct this—only apparent—paradox. The introduction thus moves us through the early stages of British and U.S. colonial settlement in Oregon; 1840s early anti-slavery and anti-Black settlement laws; 20th-century terrorism perpetrated by a large section of the Ku Klux Klan in the 1920s; the growth of a Black community with its jazz scene in Portland in the 1940s despite the former and segregationist redlining; police violence against Blacks in the late 1960s; and resistance against it in the context of Black liberation movements. Finally, Pierrot’s historical account connects Portland’s “radical politics” and vibrant cultural life to the gentrification of its historically Black neighborhoods. The four chapters that make up the remainder of the book cycle back through this history more than once, a structure that mirrors Pierrot’s insistence on the appropriative structure of Western culture as a series of cycles in which Black cultures rise against the odds but end up assimilated or regurgitated, the memory of their origins and their political significance diluted and/or erased.

Entitled “Look at that Fucking Hipster,” Chapter 1 attempts to paint a portrait of the 1990s hipster. Borrowing from Herman Melville’s metaphor of John Brown’s beard as the “meteor of war” (when the anti-slavery insurrectionist was hanged in 1859) in the poem “The Portent,” Pierrot sees or seizes hipsters’ favored hairstyle, the undercut, as the sign of the incoming neo-Civil War under the 45th U.S. president’s term of office. Fashioning his equally striking metaphor after Melville’s own, Pierrot sets the tone and the modus operandi of Decolonize Hipsters: an essay that gives itself permission to build an argument through poetical association while steeped in the precision and rigor of the historian. In this chapter Pierrot establishes the main features of hipsterdom: self-awareness, repetition, parody, and the fetishization of anything from “the past,” falling under the politically dubious realm of nostalgia. Further, at a time when advertising was capitalizing on various edges to make consumption appear like an act of participation, hipsters found themselves as a sort of buffer between countercultures and the mainstream.

Chapter 2 starts with speculation as to the origin of the term “hip,” associating it with the idea of peer recognition and insider knowledge and historicizing it within the history of enslavement. Bringing up the many codes and laws regulating all the aspects of Black persons’ lives under chattel slavery from the early 18th century in European colonies, Pierrot mentions how Black persons were able to turn terrible constraints into subtle acts of resistance, including in fashion, style, dance, music, and attitude. Black “cool,” in other words, emerges as a strategy of survival in brutally racist societies. In this way, the chapter ties style and fashion into the double bind of “cultural sabotage” (whereby many features of Black culture were based on double entendre, or signifyin’) and cultural appropriation from the very beginning of the forced and extractivist cross-cultural exchange that slavery entailed. Almost in passing in a segment on Prohibition, the author discloses the origin of the word “hipster”: the culture of clandestine drinking where people would carry a “hip flask” and frequent speakeasies. The term “hipster” later referred to Black people dancing to jazz and swing in Uptown clubs, and to bebop players and aficionados in the 1940s. Pierrot remarks that not only was bebop invented as a form that could not be appropriated by whites or used as a source of white entertainment, it also partook of the tradition of Black irony.

Chapter 3 starts from a reflection on the undercut (the “fashy”) as the expression of “whiteness personified,” with British working-class origins before it became a favorite among fascists and Nazis. Here, Pierrot focuses on 20th century U.K. and U.S. countercultures at the intersection of fashion, style, music, sports, and politics. The author weaves a thread leading from the shock-the-bourgeois fascination for Nazi sartorial items common in punk to the ironic neo-fascism of Gavin McInnes, founder of VICE magazine and the Proud Boys, and of white supremacist Mike Spencer, wishing to make fascism look cool. Pierrot targets the idea of irony and provocation as politically harmless while re-asserting the presence of Black persons in musical genres and movements overwhelmingly thought of as overwhelmingly white. Pierrot then moves on to sport to retrace the evolution of style from skinheads to tampered down looks in particular, all within the larger context of the far right’s strategy to appear more respectable. In his careful deconstruction, Pierrot suggests how humor, irony, and fascist fashion, all under the pretense of being apolitical or politically incorrect, ended up making the bed of neo-fascism. Pierrot also describes how hipsters and neo-fascists both tap into white working-class style.

With Chapter 4, the book returns where it started: hipsterism as the cultural manifestation of gentrification. The chapter approaches the role of artists as the “shock troops” of gentrification. Going back to the history of colonization, Pierrot reminds the reader how historic avant-garde artists with a taste for African cultural artifacts, such as Pablo Picasso, created a culturally transgressive taste for those objects—a trend known in modern art history as primitivism. Similarly throughout the 20th century, artists have played a significant part as taste-changers, creating cultural appreciation—and thus opening up markets—where there were none, as in the case of the gentrification of neighborhoods in the U.S. While Pierrot teeters on the brink of generalization at this point of his argument about upper and middle-class artists, he is careful to avoid the cliché according to which there were/are no artists at all in pre-gentrified areas. Also, some of the book’s Transatlantic movement (with incursions in the U.K. or France, for instance) would have been most welcome in the final chapter—so that New York did not steal the history of gentrification as it stole the idea of modern art.2

Pierrot’s book rejuvenates the genre of the political essay, or perhaps even pamphlet, as the fierceness of his tone is embedded in solid literary craft. As in Jonathan’s Swift “A Modest Proposal” (1729), the gradation in irony in Decolonize Hipsters ends up revealing the impossibility of it: “Spencer got jokes, not unlike McInnes, though arguably delivered with the pretense of reasonable discourse that makes mainstream TV happy to invite him to reasonably present his ideas for reasonable ethnic cleansing” (110, emphasis mine). What is being criticized here is also the commercially sensational rationale of mainstream media, which has contributed to banalizing the ideas and actions of such a character as Spencer. Using a polyptoton (a variation on “respectable”), Pierrot’s doubles down on irony, to the point where it explodes.

To the question, “how does one decolonize hipsters?” at the end of the text, Pierrot answers with another proposal: to become “a race traitor” and defect from the whiteness camp. But he leaves it to the reader to figure out the concrete steps leading from cultural political awareness to political action, local or national. After all, not providing readymade answers is consistent with an anti-consumerist—and so anti-hipster—approach.

Vanina Géré is Professor of Art History and Theory at the Villa Arson National School of Fine Arts in Nice, France. She is the author of a monograph on Kara Walker, Les mauvais sentiments: l'art de Kara Walker.