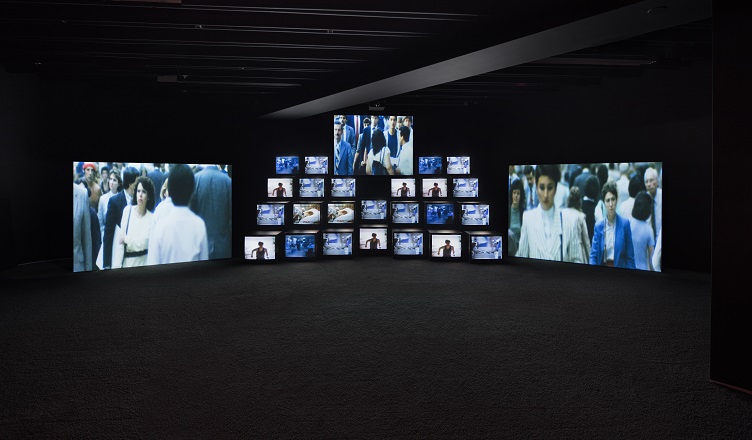 If pioneering video artist Nam June Paik’s “Utopian Laser TV Station” from the 1960s represents the last gasp of a modernism premised on the belief in technological advancement as inherently progressive, Gretchen Bender’s multimedia work from the 1980s and 90s might be seen as its postmodern negation. In 1966, Paik predicted that a radically independent and participatory form of television would come to displace the stronghold of corporate broadcasting and unleash the medium’s creative potential. Citing technology as the catalyst, he claimed, “Very very very high-frequency oscillation of laser will enable us to afford thousands of large and small TV stations. This will free us from the monopoly of a few commercial TV channels.”1 Paik’s assertion was accompanied by his own proposal for 24-hours’ worth of arts programming, bookended by a “chess lesson by Marcel Duchamp” and an “alcohol contest” featuring an “all-star cast.”2 The content of the would-be channel, at once wry and deeply serious, echoed the provocations of Fluxus, the loose network of international artists to which Paik and most of his listed collaborators then belonged. The programs were set to air thirty years after being taped, allowing ample time for technology to catch up to the promise of an open TV.

Gretchen Bender (1951–2004) foregrounded the pervasive disciplinary power of televised media, showing just how untenable a position like Paik’s would soon become. Coming of age as an artist in the 1970s, she was fluent in the visual language of the spectacle and well-attuned to capitalism’s voracious drive to commodify everything. The proliferation of screens in American homes, coupled with the sophistication of the moving image, revealed technology to be a co-conspirator of capital, not its liberatory antithesis. Bender often used television as a medium, but her tactics were derived more from the interventionist strategies of the Situationist International than the electronic art of Nam June Paik. Like the Situationists, she considered the psychological effects of advanced capitalism—how it seduces us and colonizes our desire—in ways that went beyond the aesthetic to disrupt passive viewing.

American art of the 1980s, and more recently the 90s, has since been canonized, yet many of Gretchen Bender’s contributions have gone unnoticed. A long overdue retrospective aims to rectify that. Curated by Maxwell Wolf with Kenta Murakami, So Much Deathless at Red Bull Arts New York is the first Gretchen Bender survey in nearly three decades. The exhibition, whose title comes from an unrealized project, unfolds across six galleries in a loose chronology. Attentive to both art historical narratives and the socio-political events that shaped them, it presents a wide view of Bender’s artistic development vis-à-vis the violent and contentious era in which she lived and worked. To add context to the exhibition, oral histories from many of the late artist’s collaborators are dispersed throughout the two-storied space. Arranged thematically, these personal reflections add a polyvocal richness that subverts the singularity of the retrospective even as the curators rely on that framework to give its subject meaning.

So Much Deathless begins in earnest with selections from Bender’s 1982 series The Pleasure is Back. Comprised of found photographs silkscreened onto tin panels, they reflect the influence the Pictures Generation had on her early work. Gretchen Bender was part of New York’s last downtown scene, a vibrant outsider community that flourished in and around lower Manhattan during the final decades of the twentieth century before it was ravaged by AIDS, gentrification, and the draconian policies of Rudy Giuliani. When Bender arrived in the city in 1978 a young group of artists, later known as the Pictures Generation, were gaining traction for their critical appropriation of mass imagery. A handful of them had made waves the year prior when their work was featured in Douglas Crimp’s landmark Pictures show. Lauded by the new intellectual crowd for interrogating the relationship between reality and representation, these artists sought, as Crimp put it, “to determine how a picture becomes a signifying structure of its own accord.”3 Bender was intimately engaged with members of the Pictures Generation. She established lasting affiliations with many of them, and their techniques informed much of her practice. In juxtaposing noncontiguous images mined from purportedly disparate cultural spheres, The Pleasure is Back suggests that all images, be they commercial advertisements or expressionist paintings, function as ideologically motivated signs. These slick works accorded with the theoretical trends of the time, garnering the attention of critic Hal Foster and momentarily positioning Bender within an emerging neo-avant-garde. By 1984, however, Bender moved away from the still image toward the televisual one. That shift expanded her target of critique, but it also distanced her from the investments of the art world proper.

Wild Dead I, II, III (Danceteria Version) (1984) marks Bender’s turn to multi-channel video. Situated in a far-off corner, the easy-to-miss work is rife with connotations. An onslaught of rapid visuals flash over four screens, remixing corporate logos with reproductions of contemporary paintings and abstract computer graphics, many of which were cribbed from Bender’s clandestine visits to the New York Institute of Technology. A harsh electro soundscape composed by underground producers Stuart Argabright and Michael Diekmann pulses through the space. At the time, Argabright’s group Dominatrix ruled New York City nightlife with their freestyle hit “The Dominatrix Sleeps Tonight” (the music video, banned by MTV, is now owned by MoMA). They hosted a weekly party at the iconic after-hours club, Danceteria, where this iteration of Wild Dead was shown. The original context speaks to Bender’s engagement with her world, as well as her understanding of the performative nature of digital technology. The spliced images enact a violence that is also an aperture. For me, the work conjures phantoms of queer bodies on the dancefloor, another space of potentiality structured by daily pain and transient pleasure alike. With its archaic CRT monitors on an endless loop, the empty gallery feels, for a moment, like a reliquary.

Wild Dead set the foundation for Bender’s magnum opus, Total Recall (1987), a brilliant, 18-minute feat that remains her most realized work. Bender famously referred to the 11-channel installation as “electronic theater,” a term that attests to the phenomenological nature of her oeuvre. Total Recall interrogates the relationship between television and its audiences and in doing so aestheticizes the mediated image as much as critiques it. 24 monitors and three projection screens vie for viewers’ attention such that where one chooses to look becomes a structuring element of the piece. Mainstream images culled from advertising, Hollywood film, and cable news are manipulated and cut into non-linear sequences. Stuart Argabright’s haunting score meanwhile transforms the source material. The overall experience is uncanny. Freud described uncanniness as the unfamiliar return of the once familiar, later interpreted as an instantiation of the death drive. Total Recall is its own kind of deadly return; repetition with, not only a difference, but a vengeance.

Much of Total Recall’s generative force comes from its ambivalence. Less equivocal though no less productive is Bender’s TV Text and Image (1986–1997), a variously configured series that introduced live television broadcasts into her work. In Aggressive Witness-Active Participant, a version from 1990, 12 wall-bound CRT monitors wrap around the gallery to form a horizontal band. The TVs alternate between floating grids, unmoored from the stable ground such matrices otherwise provide, and real-time programming. Each of the screens displaying live broadcasts are overlaid with black text rendered in vinyl lettering, confronting viewers with vaguely politicized phrases such as “CLASS, RACE, GENDER” and “DEATH SQUAD BUDGET” that hinder clean transmission of the telecasts. It is a simple but effective strategy. Even more compelling is the street-facing iteration of TV Text and Image, originally exhibited at the Donnell Library Center and reinstalled in the display windows of Red Bull Arts. Interfering with the flow of commerce, it sparks a cognitive dissonance—like when a screen affixed with the word “HOMELESS” shows entertainment news coverage announcing the birth of the royal baby—that implicates more publics than its galleried counterpart.

Works grouped under the heading “Dreamnation” bring Bender’s previous methods to bear on the topics of militarism and national identity. In Hell Raiser (1988-91), two large photographs create an overwhelming diptych of abjection. An archival image depicting faceless causalities from the US-backed Salvadoran Civil War sits atop a palpably raw close-up of bloodied fingers blasted to the bone. The vivid red of the splayed white flesh contrasts with the blue hue that washes out the dead brown bodies above; America figured through carnal brutality. The nearby placement of Spears (1989-91/2019), an installation of rods that pierce laminated photographs of computer-generated images, physicalizes the printed violence as it obscures it.

Beginning in the mid-90s, Bender’s work took on a sentimental tone. Occupying one section of a basement gallery titled “Memory Management” is edited documentation of the multimedia dance performance Still/Here (1994), a collaboration between Bender, who provided the visual concept, and renowned choreographer Bill T. Jones. Still/Here explores loss in the time of AIDS through a lyrical portrayal of testimonials by people living with terminal illnesses. As these affirmations get expressed through the body, Bender’s media environment takes on a somatic life of its own. The codependency between the actual and the virtual is here fully on view. Bender’s death from cancer at the age of 53 gives it gravitas, but the work’s cathartic impetus stands at a remove from others in the exhibition. The tender charge of Still/Here turns saccharine in the next gallery where fragments of Untitled (2001), a public sculpture made of hundreds of paper origami butterflies in response to 9/11—the last work exhibited during the artist’s lifetime—are kept under glass.

Beside the vitrine that houses Bender’s late efforts hangs a steel box, ugly and impenetrable save for a backlit filmstrip that glows from the center. Only after getting uncomfortably close does the word “REVOLUTION” emerge, a collective call fossilized for individual consumption. Accented by sparkling diamonds that belong more to a Young-Girl aesthetic than an anti-capitalist politics, the captured image winks at those modernist champions who saw in film the power to awaken the masses. It is an utterly cynical work with an allure seductive enough to make the failed dream it mocks almost seem reachable.

Gretchen Bender: So Much Deathless is on view at Red Bull Arts New York through July 28.