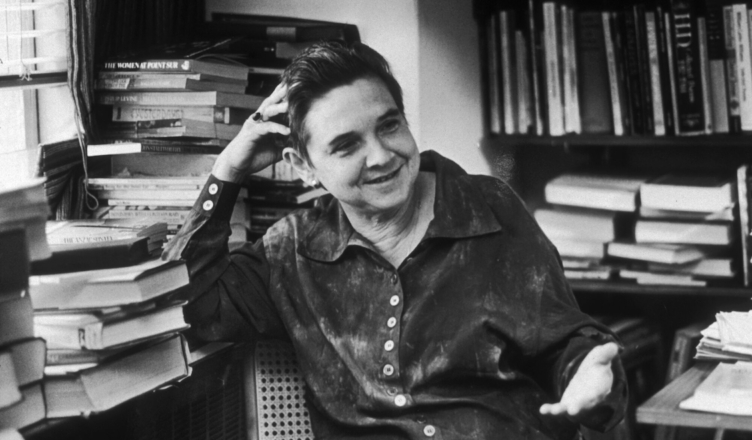 It’s impossible to narrate Adrienne Rich’s life without reckoning with the hagiography that accompanied her during her career. Her first book of poems, A Change of World (1951), was published in the Yale Series of Younger Poets, and she would subsequently win the National Book Award, the Ruth Lilly Poetry Prize, and a MacArthur “Genius” Award, among others. She was a sought-after literature professor at institutions in New York City and California, and a highly regarded feminist public intellectual. Hilary Holladay’s The Power of Adrienne Rich: A Biography, the first full biography of Rich, is eager to humanize that success. In Holladay’s treatment, Rich remains no less the artistic prodigy and self-effacing activist she was, but we also see her as a sometimes-callous sister, uncommitted teacher, and aloof partisan. I imagine Rich reading this complicated portrait graciously, an extension of her own commitment to a lifelong practice of self-critique.

Rich and her husband, Alfred Conrad, lived and taught in New York City from 1966 to 1970. During those years, students protested the Vietnam War, a lack of institutional commitment to students of color, and anti-Black violence more generally. Rich’s poetry and essays from the time record her contributions to that activism, and Holladay’s account underscores the least glamorous of those motivations for choosing to teach at City College (the site of much of the activism). Rich herself admits to “white liberal guilt” and a “need to involve myself with the real life of the city,” and Holladay doubles down on the explanation, noting Rich’s “girlhood faith in noblesse oblige” and quoting an “acquaintance” who stated, yet more cynically, that “Rich was someone who needed a cause” (184). The suggestion lingers. But it should be noted that the essay Holladay quotes from, Rich’s “Teaching Language in Open Admissions” (1972), only cites that mixed motivation as a way of presenting the significant change she and others would come to experience as instructors in that program: “our white liberal assumptions were shaken, our vision of both the city and the university changed, our relationship to language itself made both deeper and more painful.”1 I have a sense that Rich herself overstates the importance of white liberal guilt in her wanting to teach at City College. Holladay’s own emphasis on Rich’s psychological motivations for doing the work overstates the overstatement.

A later episode once again casts Rich as an imperfect activist. In 1974, Rich won the National Book Award for poetry (she shared the prize with Allen Ginsberg). Before the ceremony, Rich had “proposed a pact” with fellow nominees Alice Walker, Audre Lorde, and Eleanor Lerman to, if any of them were to win, “read a statement that rebuked the male-dominated awards hierarchy while championing the cause of all women” (255). For Holladay, the pact was less an act of cultural leadership than a “high-minded proposal [that] carried with it a large dose of presumption.” Holladay cites interviews in which Lorde is described as being “not happy with the pact” and Lerman explains that she had refused the proposal outright because she (more than Rich) actually needed the prize-money (256, 257). After accepting the award, along with Lorde and Walker, “in the name of all the women whose voices have gone and still go unheard in a patriarchal world,” Rich received “the loudest applause of the evening” (260). Lest we, with that audience, remember Rich’s gambit as a courageous exercise in public feminism full stop, Holladay exposes Rich’s act as insensitive to a more nuanced politics of difference. Add to that an earlier suggestion that Rich “was preoccupied to the point of obsession with black male revolutionaries,” and the poet comes off as somewhat less than heroic (199). 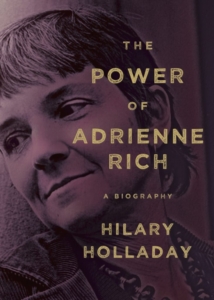 But Holladay compensates for these deliberate critiques by rescuing undersung aspects of Rich’s achievements. Rich suffered from rheumatoid arthritis for much of her life, for instance, and Holladay keeps that struggle at the front and center of her narrative. Rich herself reflected in her poetry and essays only sparingly on her experience of the illness, so Holladay’s treatment becomes all the more necessary for understanding the full impact of Rich’s disability (we see, for instance, Rich frequently in pain and physically unable to participate in some of the activism she championed). Holladay’s story stays close to the poetry throughout, and in a particularly insightful close reading, she connects the famous imagery in the title poem of Rich’s award-winning Diving into the Wreck (1973) to the psychological and physical effects of her disease. A long ladder indexes Rich’s “phobic fear of descending a staircase [which] had required psychiatric aid,” and “the crippling flippers and the prospect of learning to move one’s body ‘without force / in the deep element’ also draw on her life experience” (248). What emerges from this moment of biographical literary criticism is the feeling that Rich’s poetry was often overdetermined by a combination of experiences of struggle. A poem often read about finding one’s own way as a liberated woman and lesbian after decades of postwar misogyny, that is, emerges as finally irreducible to the particularity of that challenge.

But Holladay’s treatment doesn’t simply reinterpret elements of the poet’s life already available to public view. We learn much about Rich that never made it to print, including some exciting gossip. We see Rich using Benzedrine, drinking heavily, and smoking pot; having flings with Robert Lowell, June Jordan, and Susan Sontag; and sub-leasing her apartment to Anthony Burgess, who leaves the flat wrecked and its utilities unpaid. There’s a disturbing triumphalism to Holladay’s comparison of Rich and Sylvia Plath (Rich is described as, unlike Plath, “too curious about the world, and the next day, to ever kill herself”), but excerpts from Plath’s letters contribute some fun (and instructive) gossip of their own (145). A young Plath writes: “I keep reading about this damn adrienne cecile rich… Occasionally, I retch quietly in the wastebasket” (125). The detail’s a small one, but contributes to our overall sense that Rich’s wide acclaim had exceptions.

A recurring trope reads Rich’s life as a long struggle to emerge from the patriarchal shadow of her loving, but domineering father. Holladay reads nearly every relationship Rich has with a man as an extension of the one with her father (in particular, her marriage to Conrad, and her friendship with Hayden Carruth). Even “universities were the institutional expression of her father’s rule” (80). Regarding her correspondence with Carruth, Holladay takes pains to observe that her “letters are effusive in her praise of him, a sign that she still hadn’t overcome her desire and need for male approval” (173). In this respect, the biography continues the popular (and scholarly) tradition of reading Rich’s career as a long journey of coming to consciousness. Early, “her undervoice was still dormant”; then, it’s unleashed (125). This story’s not wrong for a poet who raised three children with a husband before finding she could live more happily with a woman; or for one whose poetry and essays often reflect on how what she felt and knew then contrasts with what she feels and knows now. But the biographical treatment at times allows this process to harden into a kind of teleological march to personal truth and political consciousness.2

Holladay treads relatively lightly on the poetry of the later career, so if truth or consciousness does come eventually, in some sense, to full flower (which I think, in certain respects, it does), we’re not left with a particularly clear sense of it. One glaring omission in this regard concerns Rich’s changing views on Zionism. In 1982, Rich co-signed a letter arguing “Anti-Zionism is Anti-Semitism”; in 2009, however, Rich endorsed the call for a U.S. Cultural and Academic Boycott of Israel.3 Holladay mentions neither position, but in the early parts of the book pays special attention to Rich’s (Jewish) father’s supposed anti-Semitism, suggesting that “Arnold’s long, hateful missives were laced with anti-Semitism,” and that “the letters filled her with grief and outrage” (105). Later, Holladay compellingly describes Rich’s conscious recovery of that suppressed Jewish heritage from feminist and lesbian standpoints. If part of that recovery led her to adopt a Jewish critique of Zionist ideology before she died, we don’t hear about it.

The relatively attenuated attention to the later career also entails a relatively attenuated attention to how Rich’s evolution led her to Marx. Marxist Humanism gave Rich the language necessary to connect the various facets of her political vision; it was not simply another stage of thought, cutting her (eventually) intersectional feminism, say, with the theory of class struggle. To narrate Rich’s evolution as one of stages, then, would be remiss not to dwell at length on her late conviction about the real root of the problem: “Promote dialogues on race? Apologize for slavery? We would need to perform an autopsy on capitalism itself”.4 For whatever social ill—race, misogyny, homophobia, ableism, imperialism, exploitation – the body requiring dissection, Rich came to understand, was the same.

Reviewed work: The Power of Adrienne Rich: A Biography, by Hilary Holladay. Nan A. Talese, 2020.

Alex Streim is a PhD Candidate in English at Johns Hopkins University, where he studies the relationship between theories of pedagogy and poetry in the twentieth century. An essay on Rich is forthcoming in a special issue of Arizona Quarterly.