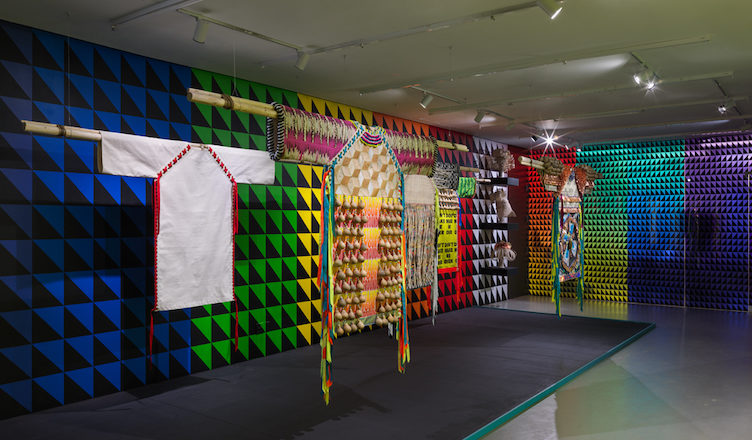 This small but thought-provoking show marks the culmination of Gibson’s artistic residency within the museum’s Department of Education and Public Engagement during the Winter/Spring R&D Season: INHERITANCE. It exhibits the new techniques Gibson (Choctaw/Cherokee) learned during his tenure at the institution, including Algonquian birch bark biting, Southeastern river cane basket weaving, and porcupine quillwork. Primarily pedagogical in nature, the exhibition also displays a larger Indigenous artistic presence in New York, through Gibson’s generous citation of other artists and a dedicated resource room. In so doing, it argues that Indigenous techniques belong in contemporary urban art spaces.

The contemplative display feels like a restful retreat from Gibson’s otherwise frantic schedule of exhibitions, which includes the touring solo show Like A Hammer, currently at the Seattle Art Museum; a piece in the Massachusetts Museum of Contemporary Art’s new show Suffering from Realness, which opened on April 13, 2019; and a forthcoming entry in the 2019 Whitney Biennial. In the main space, Gibson presents garments visibly steeped in his work to date. The artist has previously created helmets from kitsch objects, designed to both hide and protect the wearer behind a barrier of popular culture—a strategy attuned, perhaps, to the ways in which Gibson’s own identity as a queer Indigenous artist has been the focus of examination by art critics. 1 The helmets on display in The Anthrophagic Effect, however, are made of plain, undyed cane, woven according to an Indigenous technique. Eschewing the multicolored beads and figurines that characterized the earlier headgear, the new iterations foreground matters of formal structure. Rather than obscuring Gibson’s identity, then, the new helmets serve to highlight newly appropriated aspects of his complex inheritance.

The shirts likewise displayed in this space are also technical updates on Gibson’s previous work. He has previously used these garments, reminiscent of the shirts worn for protection during Ghost Dances in the nineteenth century, to materialize the weight of his racial and sexual identity. Like earlier instances, the most recent versions use neon colors and song lyrics to engage with queer culture from the 1980s and 1990s, but they also introduce new techniques.2 One garment, for example, includes porcupine quills that are both printed on the fabric and physically incorporated into the detailing of the sleeves. The pointed juxtaposition of the literal specimen with its printed representation poses intriguing questions about the remediation of material as artists such as Gibson repurpose customary Indigenous techniques to new formal and expressive ends. 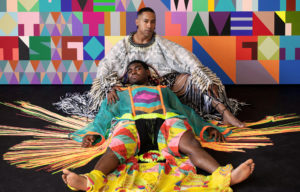 Previous exhibitions of Gibson’s work have included photographs of models wearing the helmets and garments together, turning them into complete outfits and setting the two object-types in active conversation.3 The Anthrophagic Effect, by contrast, features minimal photography. The few images displayed next to the main wall text emphasize the interaction of human agency and materiality in Gibson’s work, clarifying that the garments are meant to be worn and to affect their wearer, not just to hang as art pieces. One of the garments is particularly intriguing, as it displays its own embodiment. The shirt is printed with an image of two male models wearing Gibson’s previous work, one lying in the arms of the other. This image, used in much of the New Museum’s marketing for the exhibition, offers a powerful image of queer identity. Printed on the shirt, the image is partially hidden behind a fringe of caning, peeking out to reward the viewer who spends time looking beyond the more obvious Indigenous features in search of additional meanings.

The main wall text notes that Gibson’s exhibition incorporates garments and objects belonging to his family alongside items realized specifically for this show. However, the museum does not label individual objects, leaving viewers to guess which are new artworks and which are older artifacts—and ultimately, to both question and revise their assumptions about the traditional and the contemporary in Indigenous material culture. In the exhibition’s second room, two children’s dresses, one adult dress, and a shirt appear set apart from Gibson’s body of work by their solid colors and Euro-American shapes. The arrangement of hanging garments suggests a disembodied family, renewing questions of inheritance and lineage. At the same time, the dresses in particular remind us that Gibson’s newly learned techniques are customarily women’s skills, used by mothers and daughters to clothe their families with a display of artistic mastery.

Building on the idea that Indigenous art belongs in a contemporary urban environment, Gibson heavily references other Indigenous artists. While the techniques and artworks on display are unique to Gibson’s Cherokee/Choctaw heritage, other elements of the show reflect an intertribal sensibility. The title of the exhibition is derived from Brazilian poet Oswald de Andrade’s 1928 Anthropophagic Manifesto, a literary work that used the radical metaphor of cannibalism to envision a native Brazilian culture not reliant on colonial understandings. De Andrade was insistent that the work of Indigenous peoples was crucial to modern art and literature. Gibson continues this message in the adjacent resource room, where he includes texts that inspired his work, including recent exhibition catalogs and scholarship on Indigenous art. Along one wall of the room, press releases and exhibition literature memorialize the American Indian Community House, an exhibition space for contemporary Indigenous artists that closed in 2005. The inclusion of this material presents the New Museum as a potential successor to that now-defunct predecessor. It also situates Gibson as an heir to the Indigenous artists and individuals who have occupied urban spaces like New York for centuries, bringing his newly acquired techniques into conversation with an urban history of Indigeneity.

The soundtrack of Gibson’s exhibit spans a range of Indigenous musical styles, including the Inuit throatsinging of Tanya Tagaq. Many audience members, it seems safe to assume, will be encountering Tagaq’s music for the first time. The aural dimension therefore sends a powerful message to the contemporary art museum visitors of New York, marking this space as one that values Indigenous expression over white comfort. In fact, there is an element of warning throughout the exhibit, with a “construction yellow” hue used in both the garments and the wallpaper. Often used to urge caution in construction sites, this color suggests a potential danger in overlooking Gibson and his peers. Placing his work in multifaceted conversation with Indigenous artists from other tribal backgrounds, Gibson argues for the existence of a larger Indigenous identity that transcends specific tribal affiliations to insist on inclusion in the contemporary art world.

Victoria Sunnergren is a doctoral student and Andrew W. Mellon Fellow in the Curatorial-Track Ph.D. Program in Art History at the University of Delaware (UD). Her research interests focus on Indigenous art of North America, material culture studies, and digital humanities. As a Master’s student, she was part of a curatorial collective responsible for the Fall 2018 exhibition “’The World is Following Its People’: Indigenous Art and Arctic Ecology,” at the University Museums Gallery at UD. She also co-curated “Truths of the Trade: Slavery and the Winterthur Collection,” which was on view in the summer of 2018 at Winterthur Museum, Gardens, & Library.