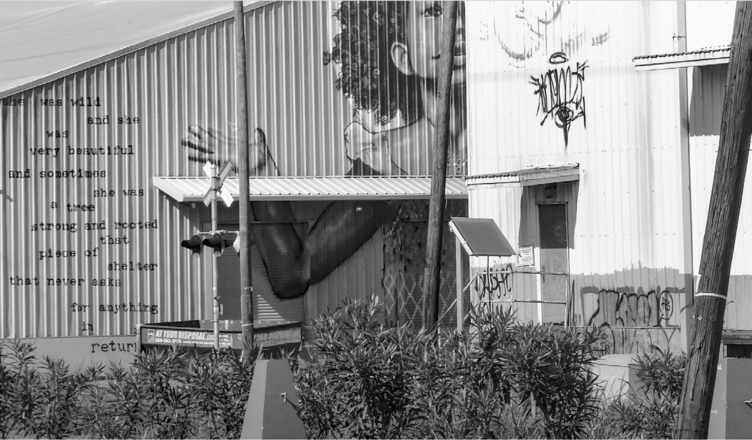 Tijuana, New Orleans, Cairo, Palestine, Miami, ​​Sana’a, Baton Rouge, Beirut, Detroit, Gaza… These are only a handful of the stops John Lennon makes in his expansive and interdisciplinary look at graffiti, Conflict Graffiti: From Revolution to Gentrification (2021). The book, whose pressing intervention is in peace and conflict studies, demands a rethinking of the role of graffiti and its relationship to state violence. How is graffiti situated in relation to the conflicts that are its political milieu? What are its politics in the urban landscape? What does it tell us about the environments and historical moments in which it appears?

In answering these questions Lennon offers a compelling rubric for thinking through the implications of graffiti within its varied urban contexts. He locates three waves of conflict graffiti: its appearance and presence in a place prior to the eruption of protest and violence; a second wave in which it is most publicized, typically during conflict; and a third wave, after the physical violence moving from protest to “one of majority suppression.” While the formulation of these three stages of conflict graffiti is useful to understand its relationship to state power, Lennon is quick to point out that like the spray paint used to produce it, graffiti is messy: it refuses easy categorization. As such it requires careful contextualization, which Lennon demonstrates throughout the book.

What count as the conflict zones where the graffiti of Lennon’s case studies appear are sites of both spectacular and slow violence: white supremacy and racialized capitalism in Detroit or Tijuana; eruptive and oppressive State violence in Cairo, in post-Katrina New Orleans, or in Yemen. Indeed, one of the contributions of this book is to effectively see in conflict graffiti ways of engaging in both the immediate and the durational. Lennon frames state violence “not only as tanks on city streets but also as embedded within the mundane policy decisions affecting the poor and working class.” This essential truth about state violence opens the analysis of graffiti, so often framed as ephemeral, to more complex and situated readings of its accretive powers: that is, graffiti, even after its disappearance on a wall or a bench, its appropriation, or its mediated circulation tells us something about the conflict, about the city, and about the sometimes quotidian and sometimes remarkable ways graffiti artists, real estate developers, average citizens, and states employ architectural surfaces and aesthetic forms for political and politicized narration.

Lennon has a fondness for triples situated in dialectical relation (the three stages of graffiti are the first of many; another is his explanation that conflict graffiti contain chaos, resistance, and renewal). Early in the book he triangulates Chantal Mouffe, Jürgen Habermas, and Vito Acconci, mapping their approach to political formation in the public sphere. Mouffe’s ‘counterpublics’ rely on agonism, Habermas’s formulation is attached to rational consensus, and Acconci views such formations as chaotic and polyamorous. The graffiti artists and practitioners and the work they produce demonstrate the contestation and negotiation between these three distinct theoretical approaches. They, like Mouffe, Habermas, and Acconci, take differing stances on what it means to enter and speak in the public sites of their interventions.

Lennon’s theory of conflict graffiti is supplemented by extensive interviews with artists and with a rigorously grounded and globally situated understanding of graffiti’s history and current state. His work takes shape in an almost unwieldy wide variety of objects: Banksy’s interventions on the separation wall; the elusive Sad Panda’s work (which the artist claims to be apolitical) in Cairo; Yemeni artist Murad Subay’s adamant and dangerous highlighting of the consequences of Yemen’s civil war with his “twenty-seven flowers on a ruined wall in Bani Hawat”—even in a rehearsing of the contested history of the well-known ‘Kilroy was here’ graffito, which appears everywhere from the hulls of naval ships to bathroom walls.

While the sheer range of places and works upon which Lennon’s analysis alights can be dizzying, there are a handful of key locations around which his argument is most clearly structured: The border walls between the U.S. and Mexico and between Israel and Palestine, the cities of Egypt in and around 2011, post-Katrina New Orleans, and post-bankruptcy Detroit. These rich sites serve as anchors for the book and allow readers to spend time in particular case studies.

The fourth chapter, whose structure mirrors other chapters, focuses on post-Katrina New Orleans. The poor, Black residents of the city were imagined as “either rampaging enemy combatants or refugees without rights” in national media in the wake of the catastrophe. Lennon positions the graffiti in the city over this period as a tactical opposition to those racist narratives. In his analysis graffiti, deployed by first responders, storm victims and members of the graffiti subculture in the city, “all used spray paint to counter Katrina’s effects,” “continually visualizing the presence of the dispossessed within the city” (137). He follows this analysis with a look at the so-called “recovery” of the city and its relationship to graffiti, in which real estate developers deployed street art to “‘art wash’ away poor minority communities, prepping them for gentrification as the ‘war zone’ turns into a ‘boutique city’” (138). He demonstrates, clearly, the three waves of conflict graffiti in what might otherwise be neglected as a conflict zone: the subculture active prior to and during the aftermath of Katrina, the graffiti that appeared and engaged in the storm’s violent wake, and the appropriation of the form by developers to suppress and erase the very communities most disastrously impacted–all the while offering nuanced readings of individual as well as collective interventions.

In this chapter Lennon also looks at two coffee-table books that documented the destruction of New Orleans: Robert Polidori’s After the Flood and Richard Misrach’s Destroy This Memory. These two collections offer two distinct views of the suffering city. Polidori’s is a New Orleans devoid of people. His highly aestheticized images have been described by some as ruin porn. Misrach also offers unpeopled images of the city, but his depiction of graffiti, according to Lennon, exposes the decidedly lively antagonisms of New Orleans in this moment: “it is a broken city discovering its vulgar and accusatory voice,” Lennon writes. “Graffiti allows this voice to be heard” (149). In addition to his readings of numerous on-the-ground projects, Lennon’s look at these two texts help to demonstrate another essential point Conflict Graffiti makes: it is not only the individual graffito that tells us something about conflict, but also the way the afterlives of graffiti continue to produce and negotiate meaning. Even after the markings have disappeared from a wall, reverberations and rereading can be found in other media, and they too have a political stake in the production of the city. This is, as Lennon shows, as true with the images of Banksy’s highly mediatized work as it is with the markings made by anonymous New Orleanians contending with their abandonment by the state captured by a professional photographer or simply a passerby.

Conflict Graffiti’s wide-ranging interdisciplinary approach buoys a nuanced, grounded, and thoughtful exploration of a subject that has received insufficient attention in both academic scholarship and policy making. Ultimately, Lennon’s urgent call is explicit: “Graffiti need to be contextualized as a social and economically place-based phenomenon of a particular area. It may be influenced by transnational actors and dispersed and remixed through social media, but graffiti are part of the architecture of a particular conflict” (219). As such, thinking about them means thinking about the nuances of conflict in situated, attentive ways that can and do enlighten.

Space and place-based scholarship has been vibrant in recent years: Places Journal is an embarrassment of riches in this regard, but so too are the ongoing endeavors of architectural theorists like Keller Easterling, media scholars like Lisa Parks and Nicole Starowsielski, anthropologists like Jaime Alves and Shannon Mattern and many others. This is to say nothing, of course, of the products of scholarship in fields like urban studies and geography. What Lennon’s work adds to the growing bibliographies across disciplines interested in city spaces is its way of making such disparate spaces and conflicts speak to each other through the graffiti he studies. The effect is decidedly not universalizing: readers will not walk away from this text thinking Brazilian Pixação is essentially the same thing as the mural depicting street violence in South Baton Rouge. What this book gestures toward, instead, is the possibilities of a radical solidarity–one that understands a common impulse for autonomy and expression in disparate and geographically dispersed cities where the nature of conflict, as well as the consequences for those who produce graffiti, are also disparate and diverse.

Conflict Graffiti is at once about politics and about passion: Lennon’s own palpable love for the artform and his clear and compelling attack on the ways its revolutionary potential can be appropriated, muted, or policed by the very forces against which it is so often aimed drive this book. But so too do the passions and politics of those who produce the work Lennon studies.

Ultimately Lennon gives his readers both a global view and detailed, site-specific explorations. He toggles between large scale forces (racial capitalism, neoliberalism, colonial violence, even, in his conclusion, the still-ongoing Covid-19 pandemic) and small (individual and organizational activism and real estate development, neighborhood demographics, the single graffito). Throughout he finds in graffiti a way to both read and intervene in the world. These days, perhaps more than ever, we need more of both.

Allison Schifani is Assistant Professor of Digital Humanities in the Department of Modern Languages and Literatures at the University of Miami. Her work explores the urban spaces, media, literatures, and aesthetics of the contemporary Americas. She is the author of Urban Ecology and Intervention in the 21st Century Americas: Verticality, Catastrophe, and the Mediated City (New York: Routledge, 2021).