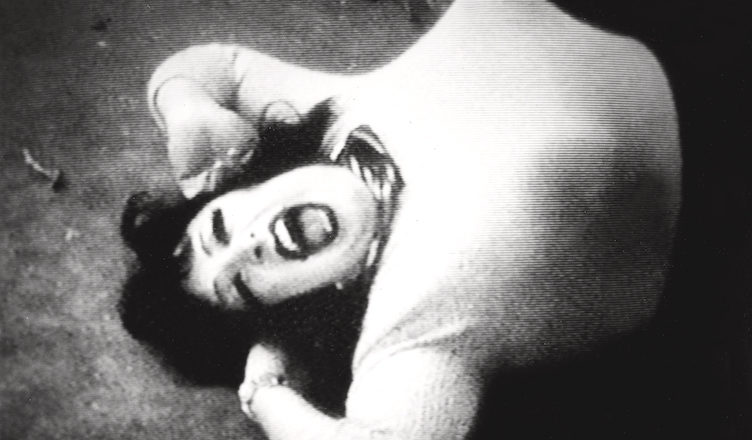 When the first major retrospective of filmmaker John Waters’ conceptual art opened at the Baltimore Museum of Art last October, the moment became an occasion for city-wide celebration. Waters is beloved in his home town, where he lives at least part of the year and where he famously made all of his groundbreaking movies. He’s a civic booster who generously supports local institutions, including the BMA, and a familiar presence around town, a rail-thin dandy with a pencil mustache whom you’re likely to run into perusing the aisles of the Giant supermarket or devouring the latest foreign film at the arthouse cinema.

Despite his reputation as a provocateur, the “Pope of Trash” is unfailingly polite and gracious with his fans, and his public persona is that of an unflappable and exceedingly funny raconteur. Indeed, although he hasn’t made a film since 2004’s A Dirty Shame, he has outrun the fame and financial success of most of his filmmaking contemporaries by cultivating sidelines as a stand-up comedian (at which he is brilliant), author, and art-maker. And unlike many artists, he will discuss his work—how he makes it, what it means, who or what inspired it—with a candor and humor winningly devoid of art world pretensions. Given this combination of intense fandom, the playful nature of the art, and the artist’s genial refusal to take his work seriously, it’s no surprise that the waggishly titled “Indecent Exposure”—which travels to Columbus’s Wexner Center for the Arts on February 2—was greeted locally with lots of interviews and much praise, but little appraisal. That is unfortunate, because much of the work on view should provoke not simply anodyne appreciation but the desire for a deeper understanding of why it matters, or even if it does.

The exhibition’s very size— a vast compendium of more than 160 photographs, sculptures, films, videos, personal artifacts, and audio projects— bespeaks a summing up, but the comprehensiveness of it all nearly defeats attempts to make sense of it. Divided into sections (among them “Growing Up,” “Transgression,” “Tragicomedy”) over several galleries, the exhibit often displays, say, half a dozen examples of a trope or theme when one would do. Many are one-note jokes that defy you to interpret them; you can almost imagine Waters, impish and dapper, standing in the corner derisively mocking your efforts, an effect that also sometimes applies to curator Kristen Hileman’s otherwise illuminating explanatory text. A display called “Time to Renew” features various magazine covers with fake subscriptions, e.g., an issue of the New York Review of Books with a label bearing Britney Spears’ name. “In what alternative universe,” Hileman’s text panel intones, “could we picture glamorous Vogue editor Anna Wintour eagerly awaiting a monthly delivery of Budget Living for fashion and entertaining tips?” I’m not sure, but I don’t know that I care. In such cases, the viewer can only pass from one object to the next, get the joke, and move on.

Other considerations often define whether a work powerfully hits its mark or doesn’t, among them historical context and the very nature of camp. Susan Sontag once explained that camp “neutralizes moral indignation,” but it can also neutralize or forestall genuine consideration, especially when time and circumstance have rendered moral indignation moot.

Like his early films of the 1970s, such as the iconoclastic Pink Flamingos and Female Trouble, Waters’ best art  gleefully skewers the cherished institutions of American life, deploying the detritus of pop culture in ironic juxtapositions of high and low, sacred and profane to expose the “indecency” of everything the straight world holds dear (family, gender norms, religious mores, domesticity), as well as our pernicious worship of celebrity and fame. This works as long as “what we hold dear” is shared by a wide swath of people and remains immutable, as is the case with Waters’ 2001’s vinyl sculpture, Sneaky J.F.K., a grinning, raffish doll representing our 35th president in drag. Accessorized to the hilt and adorned in white satin ball gown, stole, and gloves, the barefoot King of Camelot looks as if he’d just been caught tiptoeing out of Jackie’s closet and couldn’t care less. Does the representation mock JFK’s masculinity and all we’ve learned of his personal life in the intervening years? Does it suggest he’d be cool with queer? Or does the viewer’s initial shock give way to a recognition of how flimsy the myth of Camelot really was and how easily we fell for it? In any case, this image, along with several other items that speak to Waters’ enduring fascination with the Kennedys, resonates with multiple meanings in ways other works do not; beneath the surface of campy humor lie some rarely spoken uncomfortable truths about hero worship. They remain funny, shocking and moving all at once.

But other works fail to resonate, in part because the relentless perversity of our current moment has nearly stripped away art’s power to transgress. Do we really need Justin’s Had Work, a 2014 chromogenic print of Justin Bieber, his cheeks and lips puffed and distorted by fillers, to remind us that 24/7 Kardashian Kulture is toxic? After all, it’s just possible the Biebs will show up with an actual facelift any day now. Two more altered prints in this series—Waters subjects both Lassie and himself to some “work”—underscore the feeling that too much is, well, too much. 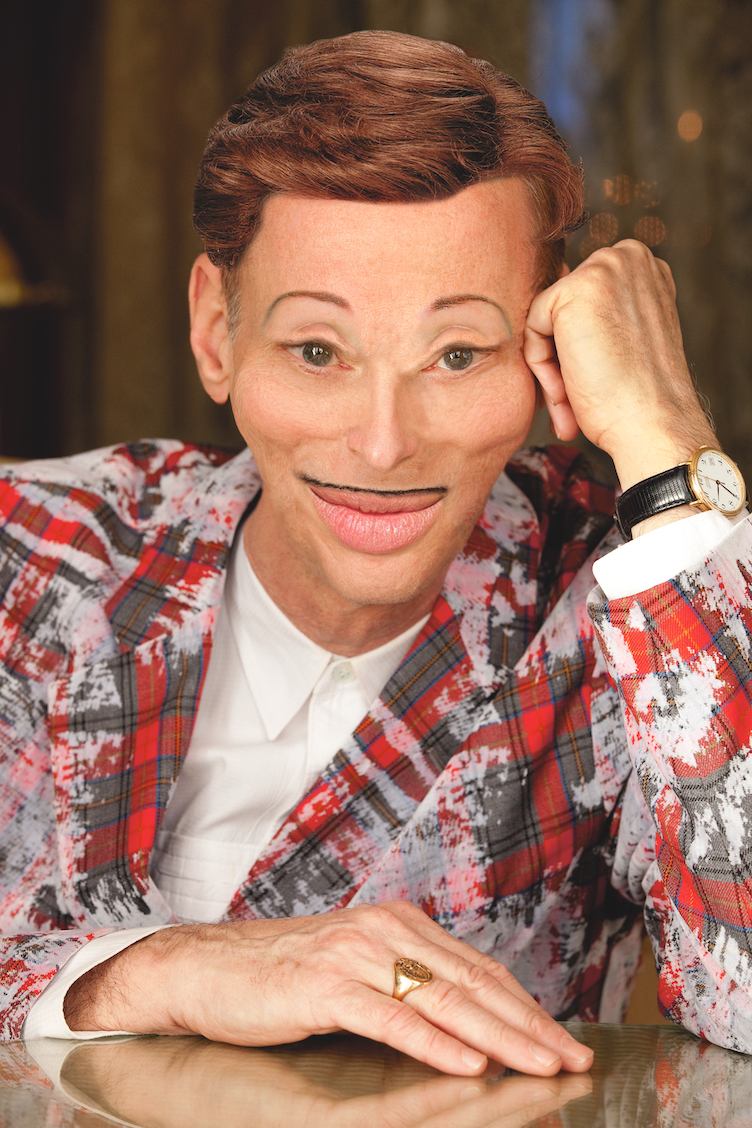 In this exhibit as in his filmmaking, Waters’ most pungent, powerful work invokes—sometimes subtly, sometimes shockingly—the taboo subject of sexuality and childhood. The moment of transition from innocence to experience, the trajectory from how we begin to what we become, haunts a number of works, like John Jr. (2009), the reproduction of an actual portrait of Waters as a child, sweet and solemn as Gainsborough’s Blue Boy. Look closely and you see that the artist has drawn a faint pencil mustache along young John’s upper lip.

That tiny portent of things to come might serve as a reminder that long before Stonewall, Waters proudly flaunted his homosexuality, his fascination for and embrace of queer culture all the more fearless by contrast with the Catholic, upper-middle-class mores of his suburban Baltimore world. He was clever enough to adopt an attitude of childlike insouciance, forestalling with humor the condemnation that surely came from all quarters in the 1950s and ‘60s. Thus the kind of moral panic that forbids frank appraisal of childhood sexuality in American culture is curtly punctured by works like Children Who Smoke (2009), eight doctored images of child actors like Shirley Temple and Our Gang’s Stymie, cigarettes dangling nonchalantly from their lips; and even more thoroughly by Kiddie Flamingos, a 2014 Blu-ray video wherein a gaggle of bewigged kids performs a censored version of Pink Flamingos. 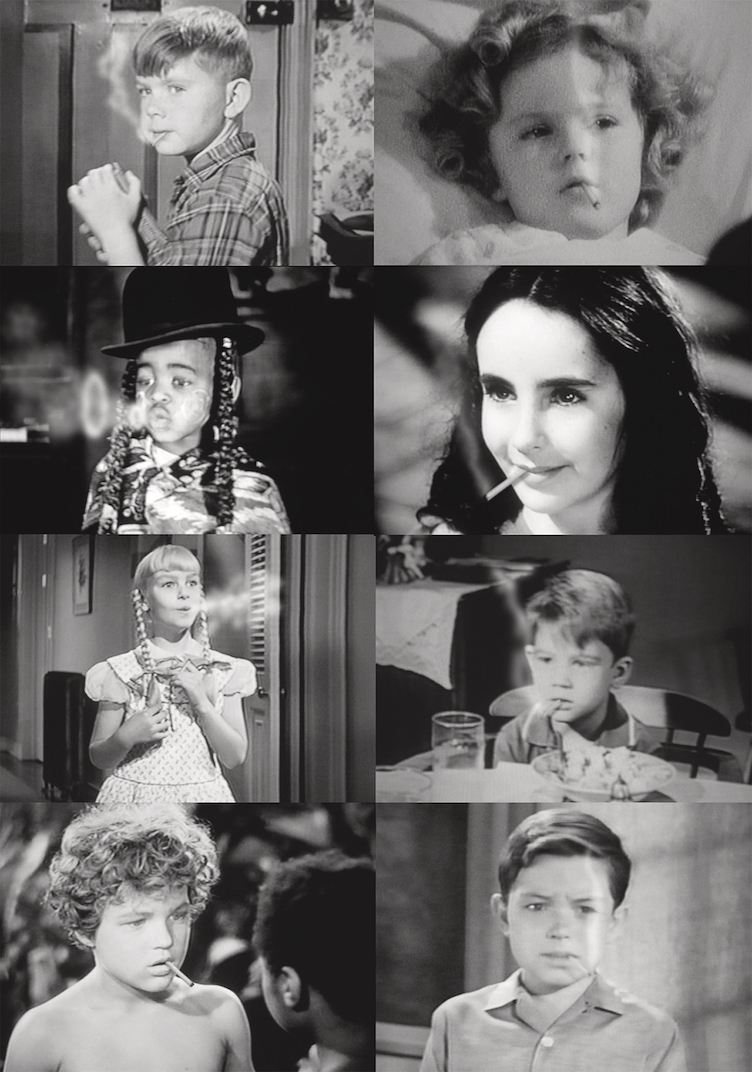 “It’s transforming innocence into a whole new kind of joyous, G-rated obscenity,” Waters remarked cannily of the video. Although the infamous dog feces-eating scene may have been excised (Divine’s kiddie stand-in eats dog food instead), what remains on full view is the child actors’ exuberant enactment of insult, fury, and cattiness. The anarchic cruelty of children is famously a way of coping with powerlessness and abjection, and Waters captures it here in ways that reverberate throughout his films and art. A similar euphoric anger fueled the transformation of shy, queer, overweight Glenn Milstead, mercilessly bulled as a child, into Divine, the fire-breathing avenging angel whose very presence was a rebuke to “adult” propriety, particularly the punishing rigidity of bourgeois gender ideals.

The year after Milstead died, Waters’ childhood friend and longtime muse was granted an afterlife as the inspiration for Ursula the Sea Witch, the villainous octopoidal creature in Disney’s 1988 adaptation of Hans Christian Anderson’s The Little Mermaid. The nod came courtesy of Mermaid lyricist Howard Ashman, himself a Baltimorean who had frequented the same gay club scene in which both Waters and Milstead had found community and refuge. Thus a little touch of subversion was slipped into America’s greatest purveyor of the sanctity of childhood innocence. In some ways the move mirrored John Waters’ own acceptance by the mainstream with the surprising success of Hairspray in 1987, wherein Divine, playing housewife Edna Turnblad, became the first drag queen to be embraced by a popular audience. Divine had been domesticated.

It was a triumph, and a testament to the success of Waters’ sly subversion by way of wit. Inarguably, that approach helped push the larger culture toward acceptance of everything it had scorned and persecuted throughout most of the 20th century. But there’s always something left over, some remnant of grand perversity that can’t be covered up or forgotten. It can be found in Indecent Exposure, the essence of which is captured in Waters’ first photographic work of art, “Divine Ecstasy,” from 1992. Searching through a VHS tape of his film Multiple Maniacs for a publicity still, he photographed the actor in what Waters described as the “one moment between rape and miraculous intervention where [Divine] lived up to the spiritual side of his name.” In the black and white still, Divine writhes open-mouthed on the carpet, eyes closed, bosom thrusting against a tight white sweater, caught in a scream that is halfway between agony and ecstasy. The figure on the floor is alluring and alarming, neither male nor female but a nexus of longing, sexuality, and pain. Divine is transfigured—a sign of something deliriously ineffable, beyond explanation or understanding. Beyond Disneyfication.

Linda DeLibero is a senior lecturer in the Film and Media Studies program at Johns Hopkins University, where she teaches American film history and aesthetics.