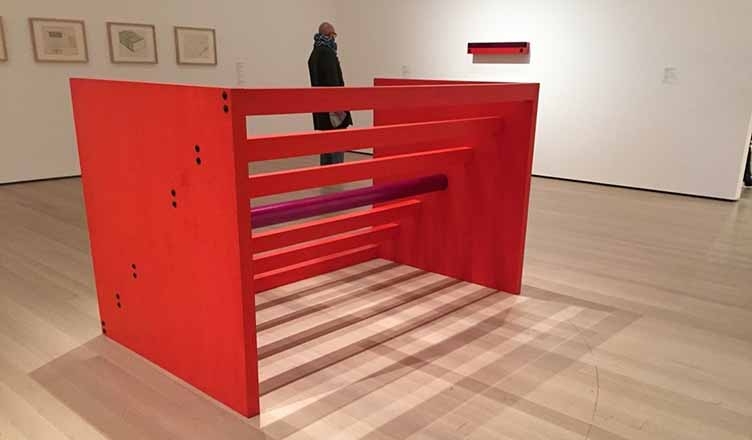 Judd (March 1, 2020-January 9, 2021) at the Museum of Modern Art puts forth a linear and progressive narrative that holds Donald Judd’s greatest achievement to be the discovery of his unique visual language in the sixties. As Judd explored and expanded that language in subsequent decades, MoMA’s galleries demonstrate that his oeuvre came to include a diverse array of materials, colors, and spatial configurations of objects. Although Chief Curator Ann Temkin writes that Judd’s practice developed within an “exceptionally narrow set of parameters,” it is, she argues, an original one that reimagined modern sculpture.1 With approximately 70 works spanning the 1960s to the 1990s, Judd makes good on its promise to deliver the first retrospective of the artist in the U.S. in over thirty years. The exhibition begins with Judd’s breakthrough years of the sixties, wherein he moved away from making portable paintings and wall reliefs to physically demanding three-dimensional objects that encroach on the viewer from the same ground they stand upon. These objects, and most all of the objects in the exhibition, are in dazzlingly spectacular condition and do much to amplify Judd’s optically sensuous surfaces as well as to challenge assumptions about the formal limits of sculpture.

Judd, overall, is a beautiful and neatly organized exhibition, but it sidelines some of Judd’s major career-spanning activities like his alternative museum (The Chinati Foundation in Marfa, Texas), furniture, land art, and historic preservation projects in Marfa and elsewhere. While Judd-designed tables and chairs greet patrons of the exhibition in the gift shop and Judd’s West Texas outposts are alluded to in a brief introductory didactic, the exhibition itself does not account for these comparatively messy, collaborative, and in some cases ongoing projects. One might rightly argue: how could it? The uniqueness of a place like Far West Texas could not possibly be transported into a New York gallery. However, the timeline MoMA advances appears so singular that it leaves little room to contemplate other tangents Judd pursued simultaneously.

The exhibition proceeds chronologically: the first two rooms encompass the sixties and Judd’s arrival at what critics termed the “specific object” as well as some of his most well-known forms like the “stack,” “channel” and “progression.” As one moves from the first room to the second, objects shift from having a hand-made to industrially fabricated appearance (Fig. 1). The third room displays mostly seventies works, larger in scale, which the curators have aligned with the notion of site-specificity. From the rhythmic patterns intrinsic to Judd’s plywood boxes to the obfuscating shadows and mirror-like reflections of a clear anodized aluminum piece with blue Plexiglas, the materials have a presence all their own (Fig. 2). The original site for which these works were intended seems lost, however, and the main takeaway is that Judd’s scale of working has grown substantially by this time. The final room spans Judd’s eighties and early nineties works made before his death in 1994 and here the curators put forth Judd’s most complex investigations of color. A wonderful complement to the works in this room are Judd’s RAL color charts, small papers with attached swatches of color that Judd used to imagine color combinations for nearby works. Each room adds another building block to the foundation, ultimately creating a portrait of an artist deeply committed to the investigation of space, material and color.

Judd was also a surprise for initiates of the artist’s work who may not have expected so many vibrant bursts of color. In the first room of the exhibition the curators attempted to recreate Judd’s groundbreaking Green Gallery exhibitions of 1963 by installing the works in an arrangement similar to the original. To students of art history whose introduction to Judd is through black and white photographs of these exhibitions, it is possible to get the wrong idea that Judd’s early work was not very colorful. This misconception has been further entrenched by exhibitions like Samuel Wagstaff’s Black, White, and Gray of 1964, which some scholars contend first placed Minimalism (albeit of a particularly sparse aesthetic) on the public’s radar.2 What Judd proves is that color was a mainstay from the beginning, even if in Judd’s case it was predominately cadmium red light, and that perhaps it is time to rethink the trope that Minimal artists also deployed a minimal palette (Fig. 3).

By covering lesser-known aspects of Judd’s practice, the catalogue offers some much-needed supplementary guidance. Three essays in particular provide bridges between Judd’s formalist pursuits and the social and environmental context of his work. Annie Ochmanek’s contribution on Judd’s history of working with Bernstein Brothers offers a snapshot of Judd the collaborator who distributed his authorial control to fabricators and assistants with specialized knowledge of the industrial processes his works required. Jeffrey Weiss’s contribution on Judd’s site-specific work reminds viewers that for years Judd engaged the space, light, and land of Marfa on a scale that supersedes the white cube. Christine Mehring’s contribution, however, goes further by demonstrating how Judd’s space-making activities in Marfa are not only synthesized with the history and culture of the town, but “are mobilized…as a politically and socially invested stance of resistance” against the artworld establishment.3 These contributions offer welcome counternarratives to the otherwise circumscribed exhibition.

Nevertheless, in the first pages of the catalogue, Temkin introduces Judd as a modernist whose greatest achievement was the reinvention of sculpture—a term Judd rejected. This may ring true in the artificially lit and white-walled galleries of MoMA, but Judd’s legacy is more homegrown than the exhibition lets on. After moving to Marfa in the early seventies, Judd eventually acquired thousands of acres of land and refurbished over 30 historical buildings where he permanently installed, on a city-wide scale, works of art created by him and his peers. In establishing the Chinati Foundation in 1986 Judd cast himself in the role of museum builder and it is estimated that he created between 30 and 50 permanent jobs in Marfa.4 Judd, however, was compelling enough to convince even the preeminent critic of Minimalism, Hal Foster, that Judd was a modernist more interested in light effects and illusion than the specific conditions of a site as had become the hallmark of postmodern practice by the 1970s.5 Of course, Judd did this too, but you would not necessarily know it from MoMA’s Judd. A better title would have perhaps been Judd-Sculpture, for that is really the segment of Judd’s practice that MoMA’s Judd exhibits best.

Members of the October crew—critics and art historians like Foster, Rosalind Krauss, and Benjamin Buchloh—have done much to situate Judd as “academic” in relation to contemporary art, important for his breakthrough achievements of the sixties but for these and these alone.6 Meanwhile, they have argued that peers like Richard Serra, Robert Morris, or Yvonne Rainer moved beyond Minimalism toward new genres like film, a postminimalist engagement with the subjectivity of the viewer, or social practice in general. Judd, in a way, becomes a foil for these developments of the seventies and eighties, representing, perversely, the standard measurement of the art of the sixties, the obdurate gravel in the pea soup of contemporary art.

Judd’s later works nevertheless go beyond the “specific object” and beyond a generalized notion of space. When the practice of institutional critique became a dominant force in the wake of modernism’s demise, Judd was already developing his idea of the permanent installation as a corrective to what he viewed as the deplorable collecting practice of “conquering” art by moving it from its place of origin.7 Chinati would offer an alternative to, as well as a condemnation of, corporate museum practice. As Andrea Fraser once wrote, the purpose of institutional critique was never to tear down the museum, but for artists to critically consider the values they want museums to stand for and what rewards they want to aspire toward.8 Judd may have investigated these questions with more sustained determination than any other artist of his generation, resulting in a museum situation in Marfa in which art has been permanently imbricated in the local eco-system since at least 1979.

The rough-hewn and vernacular appearance of Judd’s projects in Marfa is in stark contrast to what a viewer will find at MoMA’s Judd, which is not to say the retrospective is inaccurate—only incomplete. This once in a generation retrospective was impressive if only for its staggering accumulation of so many pristine objects under one roof, a difficult challenge exacerbated by the scale and fragility of the works. However, the exhibition’s singular narrative and emphasis on Judd’s formal language leaves little room for the viewer to contemplate the tangential directions of Judd’s practice that coexisted with his formal pursuits of space, material and color. Ultimately, the exhibition situates Judd’s most radical achievement as the formation of the “specific object” in the sixties and its fusion with a dizzying array of color combinations by the eighties and nineties. Nonetheless, just as Judd’s pursuits grew over time in scale and breadth to encompass architecture and museum building, there is ample room for subsequent exhibitions and scholars to offer other compelling narratives of this famed twentieth century artist.

Max Tolleson is a PhD Candidate in the Department of Art History at the University of California, Los Angeles. Max specializes in modern and contemporary art history and his dissertation, tentatively titled “The Museum After Minimalism: Donald Judd’s Chinati Foundation 1979-Present,” explores the social world of Judd’s permanent installations in Marfa, Texas. Max received his B.A. in art history from Bard College and his M.A. in art history from UCLA, and has worked in various capacities for the Bard Hessel Museum, the Dia Art Foundation, the Dream House, the Chinati Foundation, the Judd Foundation and the Los Angeles County Museum of Art.