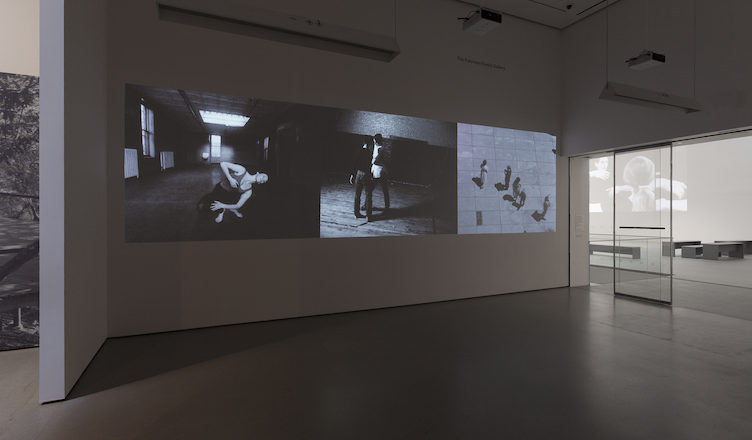 Writing for the Village Voice in 1963, Jill Johnston shrewdly observed, “In the Judson concerts there is a big, pliable, inchoate matrix of independent, original activity which knows itself even while looking for itself.”1 These words come to mind in the ambitious Judson Dance Theater: The Work is Never Done, the first major museum show dedicated to the topic. As the story is usually told, the Judson Dance Theater was born of a series of workshops led by composer Robert Ellis Dunn between 1960 and 1962 and reached maturity across sixteen concerts held between 1962 and 1964, most at Judson Memorial Church in Greenwich Village. The loose collective of choreographers, performers, visual artists, and composers involved with these productions radically enlarged understandings of what counted as dance. Privileging everyday movements, innovative compositional methods, and collaboration, the group deliberately moved away from much that traditional dance held dear—virtuosity, narratives, hierarchies. Rather than focus exclusively on the revolution staged at the church, curators Ana Janevski and Thomas J. Lax with curatorial assistant Martha Joseph also explore Judson’s multiple points of origin and larger milieu, productively elucidating its conditions of possibility and thickening its context. To move through the carefully installed and richly textured galleries is thus to enter something of Johnston’s pliable matrix, one that accommodates not just a range of fresh artistic possibilities but as many artistic personalities, allowing them to variously brush up against and encounter one another. What emerges is how often the work itself took up those very same sorts of encounters—exploring the richly complex, grittily corporeal, and thoroughly mundane task of being in the world with others. Contributing to meditations on live art in the museum, the exhibition spans four galleries and brings together photography, film, scores, objects, sound, writings, archival material, and live performance.

The first thing, really, that any visitor sees is not an object but a performance space. During the exhibition, the Marron Atrium will play host to programs by six Judson choreographers—Yvonne Rainer, Deborah Hay, David Gordon, Lucinda Childs, Steve Paxton, and Trisha Brown—each allotted a discrete run; Movement Research will also offer workshops and classes. Even when unoccupied by dancing bodies, the stage created in the pristine Atrium seems an emblem of the (literal) space being made for dance within the museum. Moreover, whether dancers are absent or present, this area highlights the specificity of dance—or, perhaps better, the logistics of dance—as a medium contingent upon bodies, which is to say a gathering of performers and publics. A consideration of such assemblies and their dynamics underwrites much of what is displayed beyond the Atrium—and also informed the program of Childs’ work that I witnessed. Pastime (1963), the choreography from the Judson era, vividly established the seriousness of the group’s experimentations. Rooted in place on a diagonal, each of three female dancers—one mostly upright, one ensconced in fabric on the ground, one with her head and torso largely plunging downwards—executes her own understated but precise movements. While not expansive, Pastime’s movements are nevertheless powerful, and compelling testaments to the technical sophistication many associated with Judson possessed. They reveal how even the slightest gestures might merit attention, thereby casting new light on other kinds of activity viewed across the stage, such as fellow audience members shifting in seats, rifling through bags, or flipping through programs.

The first gallery—“3 Dances”—further develops the exhibition’s tone with Gene Friedman’s Three Dances (1964), a film of three parts installed here as a three-channel video. In his work, Friedman, like his Judson peers, articulates an expanded understanding of dance: “Public” captures visitors walking through the Museum of Modern Art’s Sculpture Garden; “Party” shows Judith Dunn, Alex Hay, Deborah Hay, Paxton, and Robert Rauschenberg engaged in social dancing in the basement of Judson Church; “Private” focuses on Dunn at work alone in the studio. In addition to presenting dance as able to contain at once a stroll, the twist, and a plié, Three Dances equally illuminates how movement can condition relationships, opening variously onto the happenstance awareness of others in the garden, the interpersonal conviviality of the church basement, or the solitude of a daily dance practice. The film also signals the reach of dance in the sixties, Friedman turning to it not only as subject matter but as method: replete with changes in pacing, his film combines and overlays views of discrete segments of dancing bodies as if he were choreographing as much as recording them. 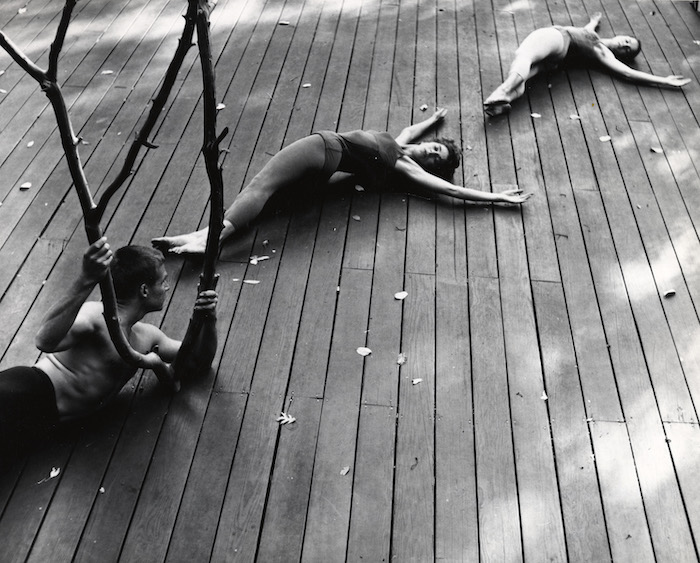 “Workshops,” the second gallery, then explores incubators for Judson, with areas attending to courses given by Anna Halprin at her Dance Deck, Robert Dunn with his wife Judith in Merce Cunningham’s studio, and James Waring at the Living Theater. Halprin’s 1960 summer workshop was attended by a number of figures who went on to work with Dunn, and a stunning series of photographs instantiates something of what was on offer there, tracking Simone Forti, A. A. Leach, and Halprin as they together and singly build an improvisation around manipulations of a slender tree limb in Halprin’s The Branch (1957). Such use of props, everyday surroundings, and improvisation would prove vital to Judson. So, too, would figures like John Cage and Cunningham, who jointly provided the Dunn workshop both physical and conceptual space within which to work. A vitrine holding Cage’s “Fontana Mix” (1958) foregrounds the importance of his signature strategies of chance and indeterminacy, with a pair of scores by Rainer positioned on the wall above as if growing from his instructions for generating a composition, as her Three Satie Spoons (1961) literally did. Nearby, Cunningham’s Antic Meet (1958) plays on a television, its witty sendup of the modern dance and ballet from which he had departed foreshadowing the ways in which many members of the Dunn group, having trained with Cunningham, would acknowledge and move on from him in turn. Antic Meet’s humor is another throughline to the Dunns, at least on the evidence of Friedman’s Heads (1965), as projected on an adjacent wall. Having only been instructed not to talk or hide their faces, the couple’s initially impassive expressions fall away as each fights—and succumbs to—a clearly contagious laughter. Delightfully human, Heads productively pushes against Judson’s association with what Rainer called a “neutral doer.”2 Equally bound to the stuff of life is Waring’s collage aesthetic, highlighted through photographs of his dance, a pair of his collages, ephemera, and the exhibition’s only costumes, for Aileen Passloff’s Strelitzia (1960). With tops of myriad gold and black fabrics—gloves, fur, shoelaces—paired with multi-colored skirts, these costumes call to mind how those who moved through Waring’s (and the Dunns’ and Halprin’s) classes ultimately wore on their bodies a conglomeration of material. Piped into each section (and also displayed as texts on screens) are invaluable oral histories featuring workshop participants. Immediately illuminating these experiences’ lasting impact—something otherwise mostly deferred to the final gallery—they also remind us that, per the exhibition’s title, Judson’s legacy lives on. 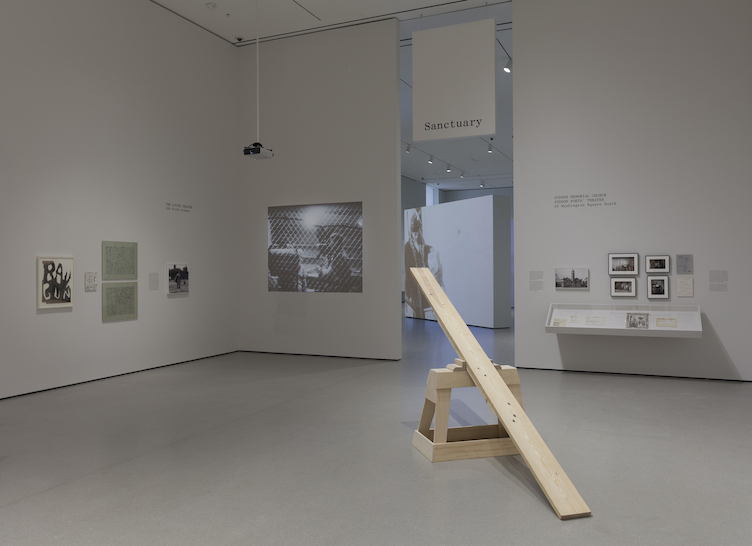 In the next, larger room—“Downtown: Sites of Collaboration”—the viewer moves through zones dedicated to an array of creative spaces, their contiguous installation effectively figuring the uniquely enabling conditions of geographic proximity. “Collaboration” takes multiple forms from one featured site to the next. There are photographs of Forti performing in Yoko Ono’s Chambers Street Loft; Diane di Prima’s review of the first Judson concert in her and LeRoi Jones’s Floating Bear; Storm de Hirsch’s film of Jonas Mekas filming the Living Theater’s production of Kenneth H. Brown’s The Brig, a work of art built on a work of art built on a work of art. Cecil Taylor’s “Mixed” from Gil Evans’s album Into the Hot (1961) comes at the notion of exchange differently still. Ostensibly in the area that takes up the Five Spot Café—at a glance thin, with only a vinyl cover and photograph—Taylor’s jazz, blending structure and improvisation, turns out to be the aural backdrop for the entire gallery. Prompting important considerations of African American culture’s impact on an almost exclusively white cohort of artists, the disembodied installation of Taylor’s music—everywhere and nowhere—seems to the point. An activating presence in the middle of all this are Forti’s Dance Constructions, both sculptures and performances, the latter largely structured by the former and given here three days a week. Like their minimalist kin, the simple plywood and rope constructions (boxes, a tilted board) have a corporeal charge, inviting imagined physical engagement and choreographing one’s negotiation of the room. Performances then enliven many of the gallery’s key ideas: with two performers on its eponymous structure, See Saw (1960), for example, explores the ups and downs of quotidian togetherness. 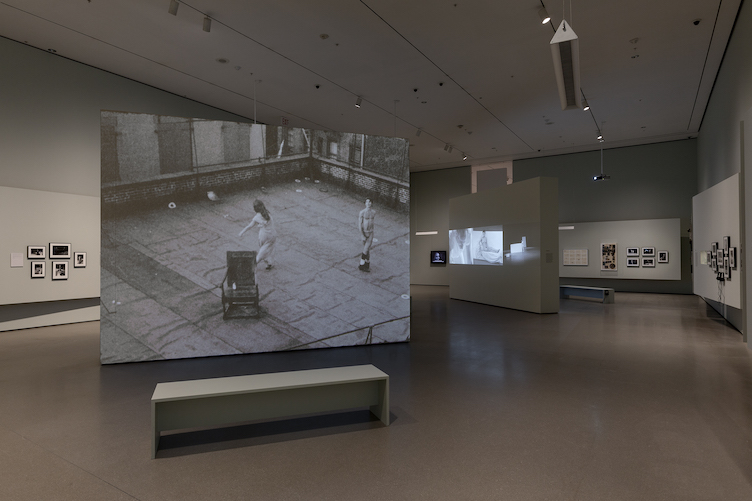 The final gallery, “Sanctuary: Judson Dance Theater,” addresses Judson’s concerts and activities. Thematic clusters are presented on sinuous walls encircling the room and mix film, scores, music, objects, and photography. Suites of photographs appear throughout, elaborating the choreography of specific dances while affording photographers like Peter Moore and Al Giese welcome exposure. At once anchoring and animating that space–and effectively conveying the heterogeneity at the collective’s core–are two large floating walls with films projected to either side, along with a pair of slideshows, each dedicated to a specific concert. Useful points of entry to that wide-ranging aesthetic, the gallery’s themes are nonetheless far from airtight containers. Why, for instance, does Carolee Schneemann’s film of her Meat Joy (1964)—in which performers handle meat, paint, and other materials while alternately improvising and following set choreography—appear in “Group Dynamics” instead of “Props” or “Intermedia” or “Improvisation”? Seeing one work by Childs in “Camp” and another in “Process” similarly suggests the complexity of any single choreographer’s practice. As the installation itself makes clear, the thematic threads are more like knots. Also entangled were the efforts of the Judson dancers. Noticing the same figures variously act as choreographer and performer across the gallery not only gives a sense of the value placed on joint work but also invites reflection on the myriad ways such collective endeavors opened onto idiosyncratic practices. 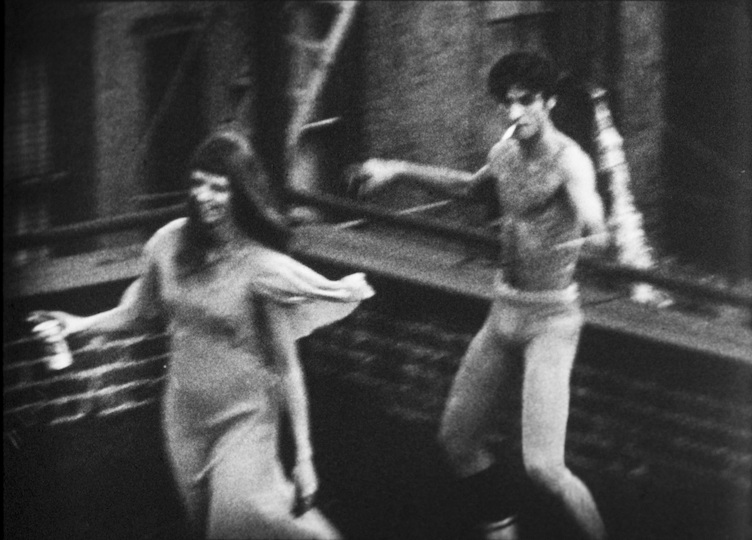 Running through the show are markers of the interpenetration of the worlds within and beyond the aesthetic arenas under consideration. Art and public comingle in Three Dances; renderings of Halprin’s home and deck flag her attunement to the natural environment; announcements for the Hall of Issues at Judson Church, which invited statements about “any social, political, or esthetic concern,” remind visitors that the church’s activism was hardly limited to the arts. And in the final gallery is Andy Warhol’s captivating film Jill and Freddy Dancing (1963), a portrait of companionship in which Jill Johnston and Fred Herko glide across a New York rooftop made into a stage—drinking beer, smoking cigarettes, coming together, moving apart. Though the pair is seemingly contained by the roof’s edges, something of the city often remains in sight; as if part of the simultaneously self-knowing and searching dance that this exhibition asks us to pursue.

Katherine Markoski is an independent scholar whose research focuses on postwar American art, with a special interest in performance and dance. Since receiving her PhD from Johns Hopkins University, she has held positions at the Hirshhorn Museum and Sculpture Garden and Washington College. She is currently at work on a book exploring the significance of notions of community to artistic practice at Black Mountain College.