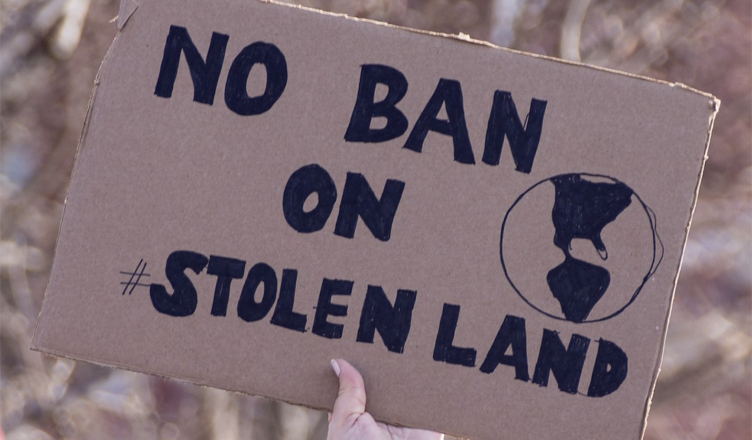 In the last two decades, scholars from Frank Wilderson to Iyko Day to Tiffany King have produced compelling work at the intersection of Black and Indigenous studies. The encounter between these fields has been generative and, at times, fraught. Mark Rifkin’s main intervention in Fictions of Land and Flesh holds that Black and Indigenous studies are “oriented” towards different analytics—they each “[follow] their own lines of development and contestation that are not equivalent to each other” (5). Rifkin argues that when scholars obfuscate key distinctions in an attempt to build political solidarity or to highlight structural similarities between antiblackness and settler colonialism, their well-intended comparative gestures can inhibit “robust engagement” (11) between these two fields By exploring the “impasse” (15) between Black and Indigenous political imaginaries, Rifkin contends that thinking between the two fields is a speculative act.

Rifkin critiques two dominant approaches to thinking through the connections between slavery and colonialism. The first, which he calls exceptionalism, exemplified by Sylvia Wynter in Black studies and Glen Coulthard in Indigenous studies, posits either antiblackness or settler colonialism as the paradigmatic structure that defines the modern world. Exceptionalism is limited in its ability to envision solidarity between Black and Indigenous peoples because scholars taking this approach “can rearticulate other political imaginaries” (27) through their own prisms. The second type of approach, which Rifkin labels dialectical synthesis, exemplified by Iyko Day and Justin LeRoy, posits that slavery and settler colonialism co-constitute one another or function “within an overarching power structure” (15). Rifkin argues that this approach, while appearing to attend to distinctions, inevitably imposes “a resolution of difference” through “an overriding structural ‘logic’” (30).

In place of exceptionalism or synthesis, Rifkin draws on Black feminist theory to argue for “irreducible difference” (30) as the “basis on which sustained engagement becomes possible” (31). He posits that thinking between the two fields requires a “speculative leap” (7) that creates “a subjunctive kind of solidarity” (221). He uses speculative fiction to explore how this leap might be made, as well as the challenges that arise in making it. For Rifkin, speculative fiction “opens the potential for acknowledging a plurality of legitimate, nonidentical truth claims” (8). The speculative is a “mode of hesitation” and “an ethics of equivocation that enables something like an ontological humility” (10). In short, the uncertainty and plurality inherent in speculative fiction make it useful for grappling with incommensurable worldviews.

While Rifkin’s introduction and first chapter articulate his theoretical claims, the book’s remaining chapters offer illustrative close readings. Chapter two uses Octavia Butler’s Xenogenesis trilogy to illustrate how place-based peoplehood and captivity are two different analytics and that reading one through the other can create distortions. Rifkin argues that the series renders Indigeneity as biological and genetic rather than geopolitical, a depiction that obfuscates Indigenous social systems. Even while acknowledging the need for Indigenous people to have their own land bases, the series portrays attachments to land as reactionary investments in racial or species purity. As Rifkin puts it, “The novels (re)configure one form of difference—the collective political refusal of Oankali invasion and rule—as the refusal of difference—a commitment to maintaining the singularity of the human and the generational transmission of this insulating (proprietary) matrix of personhood” (105).

Chapter three analyzes the differing ways that Black and Indigenous thinkers approach placemaking. The chapter opens with the contention that “carcerality speaks to the geographies of Black life in the United States” (118). Because carcerality is, according to Rifkin, the organizing analytic for understanding Black geography, notions of landedness become swallowed up by this analytic so that the very idea of emplacement appears carceral, whereas fugitivity, flight, and movement are associated with liberation. Rifkin reads Walter Mosley’s Futureland to map out the paradigm of racialized carcerality, arguing that “communal claims to place play no role in the text, since Mosley offers no sense that they could do anything other than reiterate extant systems of domination” (121). In contrast, landedness is at the core of Indigenous geography. Daniel Wilson’s Robopocalypse series provides an “illuminating counterpoint” (121) to Mosley, showing the “potential difficulties of engaging indigeneity—and place-based peoplehood more broadly—within a frame organized around captivity and flight” (121).

Chapter four continues to analyze the “tensions between flight and collective emplacement” as they play out in what Rifkin calls “the maroon matrix” (168). In Black studies, marronage has been theorized as one form of Black diasporic placemaking, but it also has strong connections to notions of mobility and escape. Thus, “a maroon framework can address and value territoriality in ways that enable a thinking together of Black and Indigenous modes of landedness” (171). Nalo Hopkinson’s Midnight Robber and Andrea Hairston’s Mindscapeeach conjoin “flight to territoriality” (176) by focusing on Black characters who engage in both “the disruptive potential of movement/change” and “the stability of creating landed communities” (183). However, though attentive to the dynamics of Indigenous placemaking, these novels ultimately “bracket the issue of Indigenous sovereignty” (171). Hairston’s novel, more so than Hopkinson’s, gestures toward a potential instrument of ethical relation: the treaty. When followed by all parties, treaties create the conditions for both “respectful mutual acknowledgment” and “mutual opacity” (216). The treaty is an instrument of speculative, hesitant relation: a trope of the “diplomacy in the undercommons” (220) that Rifkin argues is necessary for solidarity.

Rifkin incisively demonstrates the dangers of facile moves toward solidarity, no matter how well-intended. At the same time, his emphasis on hesitation and subjunctivity renders the book sparse on examples of successful Black-Indigenous relation. The epilogue discusses two contemporary examples that Rifkin sees as encapsulating successful relation across difference. The first is the hashtag #nobanonstolenland. While, by Rifkin’s own admission, this example does not actually involve Black people, it does “generate conceptual resources for affirming enduring non-native presence in the Americas while continuing to foreground Indigenous placemaking and governance” (227). Rifkin’s second example is land acknowledgments made by Black Lives Matter activists, which suggest how “an accountable ethics of non-native presence turns on building relations of reciprocity with Native peoples, relations that recognize such peoples’ longstanding connection to and governance over what the U.S. claims as its domestic space” (229). Rifkin only briefly discusses these two examples. Some readers might desire further discussion of how ethical relation between Black and Indigenous people has played out, whether in literary texts or in historical and contemporary events. Rifkin ultimately problematizes nearly every literary case study he offers. While thorough, his approach risks suggesting that the impasse between Black and Indigenous political imaginaries is so great that it has rarely been traversed.

Fictions of Land and Flesh grapples with the significant questions that arise when Black and Indigenous studies enter into complex relation with each other. It will be of interest to scholars in both of these fields, as well as those in American studies and literary studies. The book also contributes to a growing corpus of scholarship on speculative fiction, and can be read or taught alongside work by Aimee Bahng, Michelle Commander, Grace Dillon, and others. Overall, it is a provocative yet careful account of the ways artistic production illuminates—and sometimes remediates—challenging political problems.

Gabriella Friedman is a Visiting Assistant Professor in the Department of Interdisciplinary Studies at Appalachian State University. She earned her Ph.D. in the Literatures in English department at Cornell University in 2021. She works at the intersection of American studies and contemporary literature. Her work appears in journals including American Literature, Modern Fiction Studies, and American Quarterly.