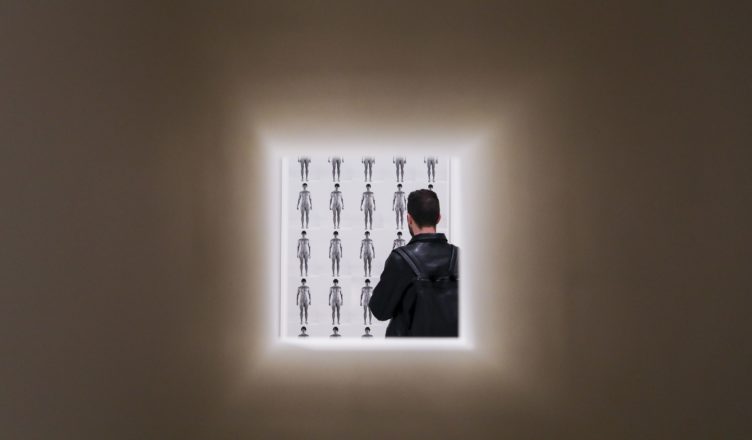 As Jack Halberstam says in the opening pages of Female Masculinity, “although we seem to have a difficult time defining masculinity, as a society we have little trouble in recognizing it, and indeed we spend massive amounts of time and money ratifying and supporting the versions of masculinity that we enjoy and trust”.1 Halberstam implies here that there are multiple kinds of masculinity, that there are kinds we can “trust,” and, therefore, kinds we shun, seek to avoid or negate. For Halberstam, masculinity is only “legible” when “it leaves the white male middle-class body”, meaning we can only read or recognise masculinity when it’s held up against something that is paradoxically different but similar to a body and status which is synonymous—or analogous—to power and hegemony.2

The recent Barbican exhibition Masculinities: Liberation through Photography picks up this gauntlet. By exploring “how masculinity is experienced, performed, coded and socially constructed through photography and film”, in works by artists such as Laurie Anderson, Sunil Gupta, Rotimi Fani-Kayode, Isaac Julien and Catherine Opie, the exhibition’s ambition was to read masculinity from the outside, from a particular vantage point of difference in an attempt to liberate it and open it up to a proliferation of possibilities or alternatives.3 After all, “liberation” implies that masculinity requires liberating, freeing not only from an oppressive force—itself—but also by something external to it. It’s hard not to consider the usual gendered connotations of historical liberation movements, here, meaning that the title thus resonates with protest cries calling for the intellectual, political, and somatic freeing of that which masculinity—and its near cousin patriarchy—often seeks to encroach, imprison and control: women’s rights, civil rights, LGBTQ+ rights.

But unlike the streets or government chambers, the gallery space only allows for a confrontation or exploration of masculinity’s manifestations via media. Jane Alison, Head of Visual Arts at the Barbican, sees possibility in this constriction, as film media can “illuminate and enrich our understanding of what it is to be a man in today’s world”.4 Architecturally, the exhibition spreads over two different floors. The ground floor is populated with works by Catherine Opie, Masahisa Fukase and John Coplans among many others. Its spaces—open-plan rooms each organised by a different theme—call into question masculinity’s interactions with things like power, order and toxicity—this last theme mostly encoded in relation to class: the privilege of American Frat House manuals versus the burly pub men found in photos by Richard Billingham. There’s also Aneta Bartos’s fascinating and almost playfully incestuous exploration of her relationship with her former-body builder father. Bartos’s father, dressed only in tiny swimming trunks, bulges across her photographs, either licking ice cream or gripping a girthy, phallic branch as he stands behind his bikini-clad daughter.5  Her photographs’ Instagram-like tint and filter coupled with the pair’s performing for the camera make for disconcertingly nice images—you shouldn’t want to enjoy looking at them, but you do.

This contrasts with what’s found upstairs: a queer utopia, enclaves of queer classics—including beautiful portraits by David Wojnarowicz and Peter Hujar, excerpts from Hal Fischer’s Gay Semiotics, and Isaac Julien’s film Looking for Langston.6  There’s a problematic kind of movement going on here, though: Alona Pardo, the exhibition’s curator, has arranged the space so that going upstairs feels as if it should be progressive, that you’ve finally arrived at a time—and at the images—where there can be masculinity without angry white men getting drunk in pubs or frat boys and their initiation rites. However the majority of the work upstairs predates that of downstairs and the final quotation you see painted on a wall is from Laura Mulvey’s classic essay from the 1970s about the male gaze in cinema.7 The suggestion is that the ideal kind of masculinity—or the most enduring—to Pardo (and thus for the audience she had in mind, too) is the kind constructed and portrayed in this now almost idealised period as represented by a coterie of queer and feminist practitioners. As Jason Farago rightly observed, the exhibition “could have been mounted 25 years ago with hardly any change to its theoretical model or its artist list”.8

It feels as if the space has been made in such a way as to draw attention to, first, the erotic voyeurism of being in a gallery, looking at other people while they look at something else, and, second, the relationship between this kind of gaze and masculinity itself. For Pardo, the two seem mutually exclusive, with masculinity all about looking and being looked at. Cut-outs, like gloryholes, in the walls on the ground floor, and the open plan mezzanine of the first floor give the impression that the space is a panopticon; you could move from photograph to photograph only to realise that what you’re looking at isn’t a photographic item but what’s happening in the next room. The observational nature of Masculinities, an exhibition, a place where you look, means the question of how this ostensibly inextricable relationship might be untangled remains unclear. Are we to view everything with Mulvey’s reminder that “Man is reluctant to gaze at his exhibitionist like”? For Mulvey, this reluctance means that “the split between spectacle and narrative,” in cinema, “supports the man’s role as the active one of forwarding the story, making things happen”.9 With this in mind, the exhibition somewhat questionably appeared to suggest, in its spatial preoccupation with its visitors, that it’s only men who can forward the story in the outside world and fully “liberate” masculinity and not the films or photographs on show.

The exhibition is right to insist on the theatricality of masculinity, however the works displayed also exuviate this Butlerian performativity into the gallery space where it is picked up by the visitors; the exhibition space itself consequently shapes your experience of and response to these photographs. In other words, if the work on show—or its curator, for that matter—insists that masculinity is performative, the space of the gallery is necessarily implicated as a space whose visitors can perform the very “unfixed” codifications it seeks to challenge. Almost memetically, the gallery encodes the visitor with the masculinity it wants to liberate in its suggestion that masculinity is inseparable from looking.

But, on a practical level, the view of everyone else was distracting. It liberated my gaze from the photographs and films and made it free to be captured by other people. Foucault reminds us that the person subject to the structure of a panopticon “inscribes in himself the power relation in which he simultaneously plays both roles”, that of the viewer and the viewed, meaning “he becomes the principle of his own subjection”.10 The exhibition ended up inscribing its visitors with a kind of neoliberal complicity and complacency: the space sets up the visitors to look around and judge each other’s aesthetic performances of masculinity—across genders—rather than really engage with and pick apart what it really means to be a man today and how that might relate to the space outside.11

Benedict studied English at Jesus College, Cambridge for his BA. He is currently a master’s student at the University of York, where he studies Film and Literature.