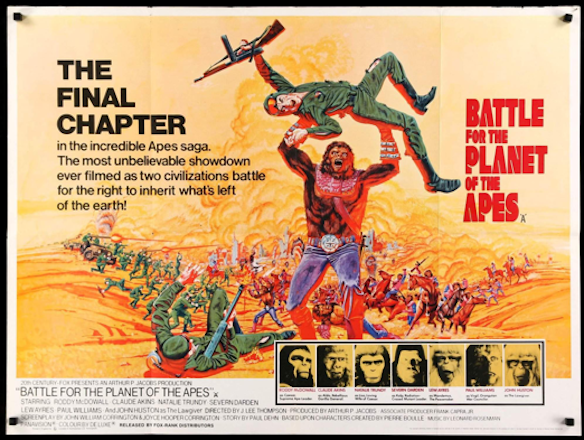 Film poster, Battle for the Planet of the Apes, 1973

Media of Serial Narrative, a collection of essays edited by Frank Kelleter, is a significant project that engages with seriality across media in terms of form and content, and also considers what popular seriality means as a cultural phenomenon. Divided into four sections—“Literature and Comics,” “Cinema,” “Television,” and “Transmedia and Digitality”—the resulting book is in many ways ambitious. The collection brings together different methodologies: narrative theory, with a particular emphasis on world-building; work on media ecologies and remediation as well as network thinking; and historically-oriented research derived from Benedict Anderson’s work on print culture’s role in creating discourse communities.

As the introduction and Kelleter’s opening essay “Five Ways of Looking at Popular Seriality” make clear, the book is also committed to a serious interrogation of the popular, and thus draws on fan and reception studies. Kelleter suggests that a crucial aspect of understanding seriality is to see it as “evolving” (12), with fans serving as “agents of narrative continuation” (13). For example, Christine Hämmerling and Mirjam Nast’s chapter “Popular Seriality and Everyday Practice: Perry Rhodan and Tatort” (the only essay to focus significant attention on non-U.S. texts) offers an ethnographic study of fandom, including delightful details of consumption practices: “Luise mostly watches Tatort alone now. While doing so, she sometimes knits or drinks a glass of wine. She is quite absorbed by the show and hates to be disturbed by her otherwise beloved son” (250). This chapter acutely observes the surprising ways that popular series—constituted by fans and creators alike—both adapt to and resist new delivery systems.

Perhaps most importantly, the collection of essays makes the case for understanding serial form as material in both its causes and effects. The essays bear out Kelleter’s call to understand “seriality as a practice of popular culture, not a narrative formalism within it” (15, emphasis original). For example, in the “Literature and Comics” section, Jared Garden’s essay “Antebellum Popular Serialities and the Transatlantic Birth of ‘American’ Comics” both resituates the historical and geographical origin point of American comics and adds a significant argumentative turn to Anderson’s claim that the nation forms alongside the novel by specifying that it is through “serial time” that the nation learns itself (37-38). The first section of Media of Serial Narrative contains two other essays focused on nineteenth-century American literature and comics, including Daniel Stein’s on the city-mystery genre and Christina Meyer’s on the Yellow Kid comics. Here, too, the authors do admirable work establishing the various agents shaping nineteenth-century American serial narratives, as well as the ways in which the narratives are themselves agents shaping the culture, with Stein, for example, establishing the “serial-political dynamic of production and reception” (56) that took place between authors and readers of socially critical novels such as George Lippard’s The Quaker City. Taken together, such essay clusters clarify both the political stakes of seriality and destabilize traditional sites of authorship and meaning-making. 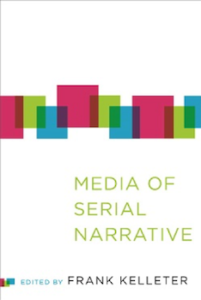 The essays in the “Television” section are the most teachable, offering an ideal ratio of particular example and broader theoretical framework likely derived from television studies’ habit of managing the well selected example against larger narrative, cultural, and media-specific contexts. The section leads off with Jason Mittell’s “The Ends of Serial Criticism,” a beautifully humble and provocative account of the challenges faced by scholars of still-unfolding serial narratives, which reads the cases of Homeland’s shifting politics and the developing fan hatred of Breaking Bad’s Skyler White. The section also features Sudeep Dasgupta’s “Sensing the Opaque,” which challenges accounts of serial viewing as a meaning-making practice by drawing from both art history and early cinema studies to insist upon the importance of moments of “nonsignifying opacity” (185). Finally, Sean O’Sullivan closes the section by offering a framework for understanding the structuring force of naturalist inevitability, rather than surprise, in television serials such as The Wire and Deadwood.

Also admirable is this volume’s effort to expand the meanings of seriality itself, a project made possible by the varied media forms surveyed here. In particular, the “Cinema,” “Television,” and “Transmedia and Digitality” sections bear out Kelleter’s framing description of popular serials as “narratives of proliferation” (18). For example, Henry Jenkins’s essay “‘All Over the Map’: Building (and Rebuilding) Oz” on the expansive lands of Oz across films, novels, and games, offers a model for studying the works of those who “are more compelling worldbuilders than storytellers” (227). Additionally, the collection highlights broader structural similarities that might not be visible were it to focus on only one media form; Scott Higgins, for example, argues for understanding sound serials as offering a “peculiar mix of narrative compression and willful inefficiency” (93), while Shane Denison and Ruth Mayer argue that “serial figure[s]” such as Count Dracula who exist across series and reboots “become media” in their embodiment of what a particular media form may afford (109). In moments like these, the interdisciplinary gains offered by the broad framing question—what is popular seriality?—crystallize most clearly. At its best, this is a collection that should encourage interdisciplinary collaboration to produce shared knowledge through a collection of diverse objects of study.

It is all the more surprising, then, that Media of Serial Narrative as a whole remains so narrow in its sampling of cultural texts. The introduction offers this caveat: “Of course, many more topics could have been included: radio, soap opera, telenovelas, sports broadcasting, and countless other types of popular seriality. By necessity, this book must make selections” (6). But this caveat raises important questions: whose popular serial fiction has been selected?

Recent popular arguments about fandom, especially in the context of science fiction serials such as Dr. Who and Star Wars, have drawn attention to the problem of assuming a work’s audience. Nonetheless, it’s a bit shocking that women fans, feminized art forms, and women as creators are so starkly absent in this volume. Though the essays of Media of Serial Narrative are conscious of the fact that popular texts are sometimes deemed unworthy of scholarly attention (9-10, 281), there is little to no acknowledgment in the book that popular texts’ devaluation has historically stemmed from their association with marginalized groups. Despite the diversity of media forms gathered, the collection displays a remarkably consistent absence of women and people of color, as producers and consumers of texts alike. It’s not like these folks are hard to find; Hawthorne, for one, felt overwhelmed by a “damned mob” of them in the nineteenth century. And what is the serially-written fan fiction juggernaut Fifty Shades of Grey if not popular? The collection focuses heavily on U.S. and English-language works, a choice perhaps worth noting in the title or introduction so that readers who imagine that telenovelas or manga might be addressed in a volume titled Media of Serial Narrative would be a bit less disappointed. Despite the excellence of the individual essays, it is hard to have patience with Media of Serial Narrative when taken as a totality. Readers turn to anthologies to familiarize themselves with a field, to encounter a new body of knowledge, to research new courses, and so, as in all things, selection and representation matter.

To ignore the cultural production of people of color, women, and nations beyond the U.S. and Europe is not a matter of failing some test of political correctness; rather, it is to skew the very object of study. For example, in his chapter on sound serials, Scott Higgins notes that film serials “were initially produced for an adult, primarily female audience” (93), but these women and the films they love are nowhere to be found in Media of Serial Narrative. Instead, we have more than one chapter discussing Planet of the Apes reboots and multiple chapters on nineteenth-century U.S. serial novels without sustained discussion of the women who produced and read so many of these texts. After completing the volume, readers may find themselves fantasizing a new table of contents; I imagined a collection with chapters on Pauline Hopkins’s magazine novels, Yo Soy Betty La Fea and questions of language and national markets, Osama Tezuka’s manga epic Buddha and faith, the transmedia expansiveness of Gentlemen Prefer Blondes’s Lorelei Lee,  telenovelas and Jane the Virgin’s bilingual seriality, series longevity and General Hospital, the Ghanaian YouTube series An African City, serial queens and modernist femininity, queer prestige television such as The L Word and Queer as Folk, Tokyo Ghost’s adaptation from illustrated magazine to animated series, Roz Chast’s ongoing and subversive performance of abjection, and so on. In seeing all that is missing in Media and Serial Narrative, I hope that other readers and future editors will be inspired to make volumes that, in being more inclusive, have the effect of offering a more accurate account of popular seriality.

Katherine Fusco is an Associate Professor of English at the University of Nevada, Reno (UNR). Her books include Silent Film and U.S. Naturalist Literature: Time, Narrative, and Modernity and Kelly Reichardt (with Nicole Seymour). She is currently completing a project focused on celebrity and identification in the 1920s and 1930s.