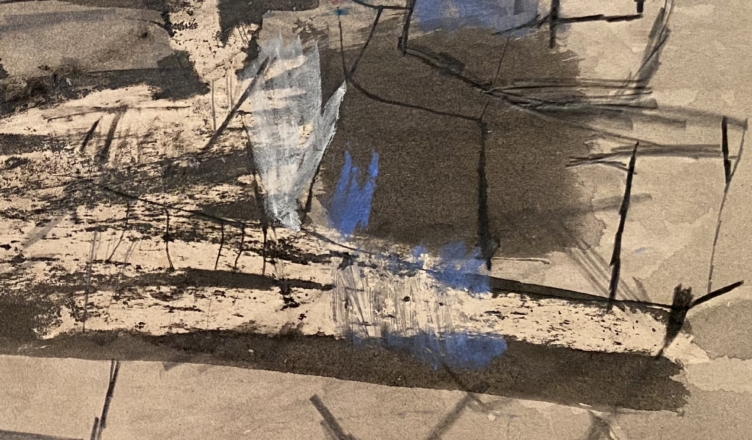 Nasreen Mohamedi’s works from the late 1970s—intricate monochrome lattices previously on fine display at the Met Breuer’s landmark solo in 2016—operate so powerfully in the realm of “pure” abstraction that the critic Geeta Kapur has placed her “within a great lineage of metaphysical abstraction in a way that no other [Indian] artist is.”1 But a gem of a show at Talwar Gallery in New York, which first opened on the 29th of February and remains on view by appointment (its extended dates a product of COVID-19), shows us the labor that got her there.

Born in 1937 in Karachi, Mohamedi lived and worked in London, Paris, Mumbai, New Delhi, and Vadodara in the 1960s and 1970s. Bringing together roughly two dozen works from this period—drawings in ink, graphite, watercolor, pastel; lithographs, aquatints, etchings, photographs, photograms; two magisterial oil paintings on canvas—and admirably, from each of these locations, Pull with Direction offers a much-needed procedural prehistory of Mohamedi’s mature vocabulary.

Retaining the root character of “abstract” as a verb, an abstracting by “drawing from” and “drawing away from” the visible world, early representational works from around 1955, when Mohamedi was at St. Martin’s in London, show spindly lines making mountains, tree trunks, and homes while loopy scribbles describe details: shrubbery, leaves, foliage. The landscapes blend calculated rhythmic structure with more contingent effects—spontaneous shakes, blooming watercolors, soaked ink.

As forethought and procedural surprise are brought together, so too are equivalences between page and world. In an untitled work from c. 1960 roots, leaves, and overgrowth spill along the axis of a bifurcated page, its horizon and the landscape’s marked by a warm spread of diluted umber. A rough graphite grid plots space on the page as a perspectival measure. The relationship between material and content is reinforced by represented dualities: a dipping branch submerges into the umber as its own root; drooping lines, perhaps banyan propping roots, become thistles and grasses growing on the bifurcation; fingerprints frequently touch the paper and render clutches of vegetation. Soil, in particular, is depicted as color, and so as a metaphor for the material “ground” of paper, while literal edges act as a kind of fertile soil: a sole ginkgo leaf grows out of the paper’s bottom edge, its roots in our world. Drawing parallels between representation and literal materials, the depicted world of Mohamedi’s early work is shown to be inseparable from the fact of its articulation.

So much so that the rest of the works in the first of two rooms are devoted to the action—stippling, scratching, rubbing, hatching, spreading, pressing, swiping, coaxing, dripping, staining, and smearing—of articulation.  A series of prints and drawings from the 1960s, when Mohamedi was a print apprentice at the École des Beaux-Arts and Atelier 17, demonstrate these actions while fully devouring violent making: ridges are corroded by acid, lines are pierced by metal, textures are issued by friction, passages are split by the back of a brush. In these works, directly anticipating experiments on paper in the 1970s by the Indian artists Arpita Singh (shown at Talwar in 2018) and Somnath Hore, Mohamedi interrogates the expressive potential of her medium but abates its suffering with splashes of cool, detached, history. Take for instance elements that can easily be read as signifiers of previous works, such as the vertical line with horizontal cuts that could stand for the trees of the 1950s, or tiny leaf cutouts that stand for landscape itself.

In “automatic” watercolors that immediately follow, Mohamedi evicts color, letting the material think itself as stains and streaks of wet ink on wet paper while retaining controlled drawing both atop and underneath broader washes. Rhyming sequences—ink and line following each other—return, and the paper support becomes so important in this period that it is itself abstracted: its edges signified as right angles; its coordinates drawn and traced as phantom grids. In the remarkable yellowed-olive oil painting in this room, these forms (the right angle and the grid) are amplified by several crosses and feathered strokes. If, in the landscapes, representation was shown to be contingent on the material support, in these later works this contingence becomes content.

The smaller second room, arranged thematically, is swiftly dedicated to condensed experiments with the right angle and the grid, as well as the importance of her photographic practice to both forms. Black and white details of architectural pathways and looms accompany two experiments in manipulation; in the first, cut black paper blocks a right angle in a photograph of the underside of strings; in the second, her own paintings are collaged and rephotographed. Three later works, examples of what have come to be called her grids, show the beginnings of Mohamedi’s mature vocabulary. Two of them—a tremendous watercolor with intricate ink drawing and a grid drawing with prominent licks, curves, diagonals, and receding planes—have been exhibited before, but the last, which hasn’t been seen since it was first sold, is perhaps the most important work in the show.

A watery optical riddle, the square shimmers at a distance, inviting close inspection and teaching us to see without attempting to recover process. Fully shining with Mohamedi’s turn to intricate drawing, the work reveals the paper it sits on, as though drawing the material itself. Recalling the loose grid that previously structured landscape, the work here demonstrates the incentives Mohamedi notes in her contemporary journals: “patterns are created through the intensity of structure.”2 The grid of representation, one could say, has now become the content of the work, drawing material at the same time that it draws the historical mechanisms of drawing as a medium. This has always been what is ultimately at stake in Mohamedi’s practice, and the final work feels like a quiet crescendo. Walking and stopping and staring through Talwar (alone and at leisure, perhaps the one benefit of social distancing), we are presented with the historical itinerary that produced it.

Meghaa Ballakrishnen is a PhD candidate in the Department of History of Art at Johns Hopkins University, where she studies twentieth-century art and critical theory. For 2020-2021, she is the Asher Family Fellow at the American Institute of Indian Studies. Her research has been supported by the Rockefeller Archive Center and the Getty Research Institute.