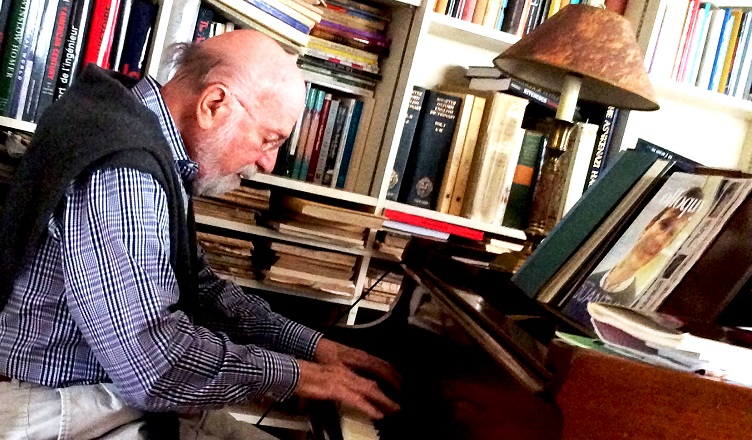 The lasting impression I have of Stanley Cavell is of a staircase tap dance routine. Not one that he did himself: he was over seventy when I first met him, in my senior year in college, in a course called Philosophy and Literature. It was a tap dance by Fred Astaire, I think, which he played during class to illustrate a point. Movies, plays, operas, novels, and poems were some of Cavell’s favorite things to think about—not simply as examples, but as places where philosophy could occur. But with the Astaire routine, as he explained it, his questions about philosophy and aesthetics foundered. He was bored; there was nothing interesting to be said. I don’t remember the precise way he put it—it was something like “I couldn’t find a way in.”

This scene, not only of the possible beginning of philosophy, but of its evident unavailability or helplessness, has come back to me regularly over the fourteen years since the class. To the extent that I had thought about them, philosophical problems seemed to me like objects of contemplation, analogous to paintings or landscapes, that profited from duration, patience, meditation, and careful attention. As a college student, philosophy therefore seemed particularly remote, a separate place where language was used in a way that had to be learned. At most, I caught a glimpse of a world to which I was not, and would never be, admitted, except as a kind of spectator. I figured that I had missed some induction ceremony and, since I was primarily interested in poems and in novels, that I would never find the same groundedness in philosophical problems that I found in narrative description or in poetic occasions.

For Cavell, this experience of philosophy—my experience of philosophy, while listening in lecture halls or reading alone over a book—was the symptom of a sad state of affairs, a sign that something was wrong. His abiding preoccupation was with the ways that philosophy could make its own difficulty the object of study. The simple, sorrowful leitmotif of Must We Mean What We Say? is that we have become alienated (Cavell’s word) from the words we use, “living as it were in exile from our words, not in a sure position to mean what we say.” Cora Diamond has called this “deflection.” She reads Cavell as refusing philosophy’s flight from the difficulty of reality, from what belongs to flesh and blood.

Cavell’s solution was essentially a dramatic or cinematic one, which is to say an aesthetic one: philosophical questions were to be returned to the natural scenes in which they might be asked. The most important word in the title of the book is perhaps the word “must,” since it vexed Cavell not to understand why we “must” mean something when we say it in an ordinary circumstance. This sense of necessity could not be solved by collecting data from the speakers of a language, but was, Cavell thought, a priori, a feature of the ability to use language in a way that made sense to ourselves and to others.

I realize now that the therapy Cavell offered to philosophy was pretty much entirely lost on me at the time. I found Must We Mean What We Say? an estranging, supremely difficult book: what could possibly link together the musings on Wittgenstein, J.L. Austin, Beckett, and Shakespeare? Returning to the book after Cavell’s death, I understand that I was reading it exactly the wrong way, that I was charging philosophy with the task of raising problems—the existence of others, the sharing of pain, the avoidance of love—and then with the crime of failing to solve them. I failed to see the most obvious and most repeated lesson of the book, Cavell’s insistence that moral and epistemological questions can best be approached by restoring those questions to the ordinary, lived moments at which they are posed. The class itself, with all its joyful, maddening tributaries and tangents, was nothing less than the enactment of what Cavell was after all along: a philosophy done socially, in search of provisional agreement rather than (or in addition to) truth, where being there together would be almost enough.

I don’t remember precisely what significance Fred Astaire ultimately had for Cavell, although I know he wrote about Astaire in one of his recent books. I remember, instead, the tap dance as an emblem of resistance to the kind of philosophy that had seduced me with its questions only to alienate me from my words. There is a famous line from Beckett’s Endgame that, in Cavell’s reading of it, resonates across the play like a kind of revelation: Hamm says to Clov, “you’re on earth, there’s no cure for that.” Before Cavell, I had thought of philosophy as, at best, a matter of places to end up, whether those places turned out to be heaven or hell. After Cavell, the ever-recurring question of philosophy and criticism is, for me, where, on earth, to begin.