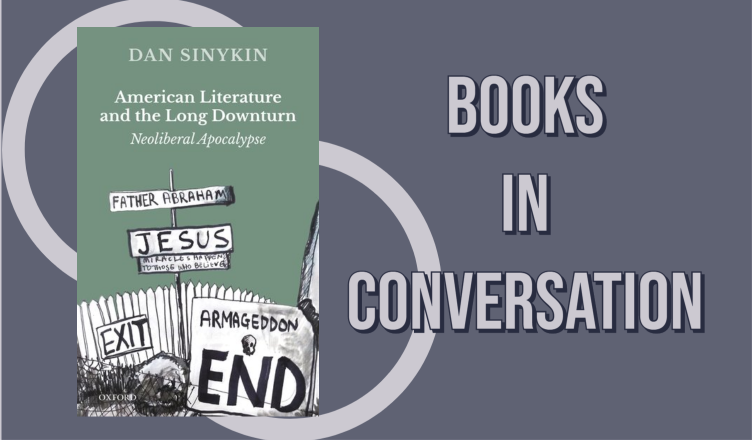 On Thursday, November 19, 2020, Dan Sinykin and Sarah Wasserman met on Zoom to discuss their new monographs before a virtual audience as part of ASAP’s Books in Conversation series. Kinohi Nishikawa introduced the two and moderated the event. At the end of a long, challenging semester but the beginning of a dark, difficult winter, to gather as colleagues and friends and be together in intellectual community was a rare balm.

Dan’s American Literature and the Long Downturn (Oxford University Press 2020) argues that to find the meaning of our apocalyptic times we need to look at the economics of the last five decades. Below are Sarah’s remarks on Dan’s book.

Sarah’s The Death of Things: Ephemera and the American Novel (University of Minnesota Press, 2020) examines literary representations of disappearing objects in American culture from the beginning of the twentieth century until today. Find Dan Sinykin’s remarks on Sarah’s book here.

Let me begin by noting that it’s the perfect time to read Dan’s book, American Literature and the Long Downturn: Neoliberal Apocalypse. But not for the obvious reasons—not because this year has seemed to confirm and crystallize the apocalyptic nature of U.S. neoliberalism; not because Dan’s book shows us how the economic policies of the past five decades have led us to where we are today, although it does this.  And it’s also not the perfect time to read Dan’s book because it offers some kind of utopian vision, a literary path through the flaming hellscape of coronavirus, climate change, white supremacy, and incipient fascism. Although Dan begins the book by pointing out that the figure of apocalypse “offers a way out of an otherwise irredeemably unjust world” (1), he is adamant that the writers who adopted apocalypse as a “political literary form” “invested literature with powers it would prove to lack” (2).

When the stakes of things feel so high and we feel compelled to assert that our scholarship makes a difference, Dan’s book lingers with texts that can’t be neatly captured by terms like redemption, revolution, or justice, no matter how much writers (and literary critics) would like to write such terms into being. In Dan’s careful hands, apocalypse is a concept through which writers reflect the world’s sickness, recognize they can’t find the cure, but don’t stop trying. His book asks not about the political utility of failed forms, but about the ways that imagining The End generates forms themselves—how apocalypse is a means of shared critique of America, across a range of political ideologies and across texts that we have yet to think together. Dan helps us see what we can do with the books we read even when those books don’t do politics. As he writes candidly in his conclusion: “I feel helpless in response to the suffering of the long downturn and neoliberalism. I struggle to comprehend the extent of my complicity as I live everyday embodying it. Against this condition, apocalypse strives for certainty, but the failures of neoliberal apocalypticism, not the certainty, are what move me” (159).

I am moved by Dan’s ability to tarry with failure and make it legible and also generative of literary history. And to be honest, I am also moved by the way Dan writes. The economy and clarity of Dan’s prose is astonishing. The book is filled with ideas, with rigorous historical framing, compelling close readings, and original archival research. But it is remarkably without bloat, without jargon: a true page-turner. I can’t say it any better than Jack Truschel, a brilliant graduate student at the University of Delaware said it in a message to me: “Dan writes in such clear, short sentences. I want to write like that, but my ideas aren’t good enough so I need to disguise them in long bullshit sentences with lots of clauses.”

Before I attempt to put our books in conversation and to say what it means to me to think with Dan, I want to briefly summarize his book. As I’ve already indicated, the book argues that 20th and 21st century American writers—James Baldwin, Cormac McCarthy, Leslie Marmon Silko, and David Foster Wallace among others—turn to the figure of apocalypse as a response to the economics of the last five decades.1 Following Robert Brenner, Dan calls those decades the long downturn, a period that “led to the betrayal of civil rights by the government’s failure to pursue economic justice” and also to the “stagflation and oil crises in the 1970s, the bankruptcy of New York City in 1975, and the rise of global finance and multinational conglomerates that challenged, not least in the minds of white evangelicals, US sovereignty” (6).2 Wage stagnation, the growth of personal debt, the erosion of civic organizations: this, Dan writes “is how the long downturn came to feel like the end of the world” (8). In the face of such dire conditions, the writers Dan considers turned to an old form in new times, putting what he calls “neoliberal apocalypse” into the pages of their novels. Within a frame that combines economic history with publishing and reception history as well as archival research, Dan reads the texts’ formal choices in light of their status as commodities. This last point—that what novels say about neoliberal apocalypse cannot be understood independently of how they come to exist in a neoliberal economy, is important. It explains why Dan’s next book, The Conglomerate Era, about the ways that the conglomeration of publishing has changed literature, follows logically from the Long Downturn. The fantastic and harrowing chapter “White Rage, White Rapture,” for instance, is about the ways white supremacy, the religious belief in dispensationalism, and the publishing industry intersect to give shape to blockbuster texts espousing white apocalypticism. It’s a testament—admittedly a grim one—to Dan’s ability not just to “run the numbers” when it comes to publishing, but to harness their explanatory power alongside his interpretive readings.

I hope it is clear from this summary that Dan’s book, like another exceptional new book about apocalypse, Jessica Hurley’s, Infrastructures of Apocalypse: American Literature and the Nuclear Complex (University of Minnesota Press, 2020), takes an empirical object (in Dan’s case the economics of the long downturn, in Jessica’s nuclear facilities and testing) and combines it with interest in the abstract concept of apocalypse.3 When I put my book in conversation with Dan’s, it strikes me that we both attempt an alchemical conversion of the material world into philosophical conundrums about the absolute: can economics, or even ephemera, tell us whether or not the world is ending? Do all things die?

Other similarities are thrown into relief—we are both, in the most basic sense, interested in how the waning fortunes of America in the 20th century make their way into the novels we study. We are both invested in examining decline, dissipation, and disappearance—not because we think they can be transformed into political goods, but because they can serve as figures of critique and because they make for some pretty good novels. And we both wonder if it’s possible to read the contemporary canon against itself—to say something new about some over-read authors.

Reading Dan’s book though, I was struck by something else—a kind of heightened awareness that Dan is a member of my generational cohort, that our books are very much shaped by the same historical forces, the same moment in graduate training, the same fact of finishing a first book under a Trump administration. I know from reading Dan’s incredible essay in n+1, “White Voice,” that he and I have a few things in common—we were both born in the first years of the 1980s, making us geriatric millennials; we are both (at least nominally) Jewish; we both owned a Sega Dreamcast. We both went to small liberal arts colleges and majored in non-humanities things along with English: Dan in Math, I studied Biology. We finished our PhDs around the same time, when the academic job market was just beginning to show signs of life after the 2008 financial crisis. So how is it that these books are both products of this shared formation? My sense is that Dan’s math has, in some small way, become an economic anchor for interpretation; my own training in biology and material sciences grounds my material culture approach. But more compelling to me is what our overlapping backgrounds mean for the status of the literary. We found ourselves in graduate school committed to literary objects at a time where there were no more theory wars left to fight. Interdisciplinarity had begun its reign; methods were variegated and open for idiosyncratic combination. And yet when I read Dan’s book, I don’t see a post-theory book so much as I see a scholar thinking seriously about why and how literature could still matter so much when theory—not to mention the internet—had taught us about literature’s limitations. I could make the case here for a buried allegory of literary apocalypse, or literary transience, but I think both Dan and I are attempting to argue subtly, historically, carefully that literature helps us face the apocalypse and the death of things while scaling down the power of both. I know for sure that he succeeds.

I guess Dan and I are, in some crucial sense, children of the long downturn—beneficiaries of neoliberalism who also feel its crippling powers, readers looking for something beyond neoliberalism and finding only apocalypse and transience. But finding it, ironically, in literature that we haven’t managed yet to annihilate.

Sarah Wasserman is Assistant Professor of English at the University of Delaware, where she also serves as Associate Director of the Center for Material Culture Studies.