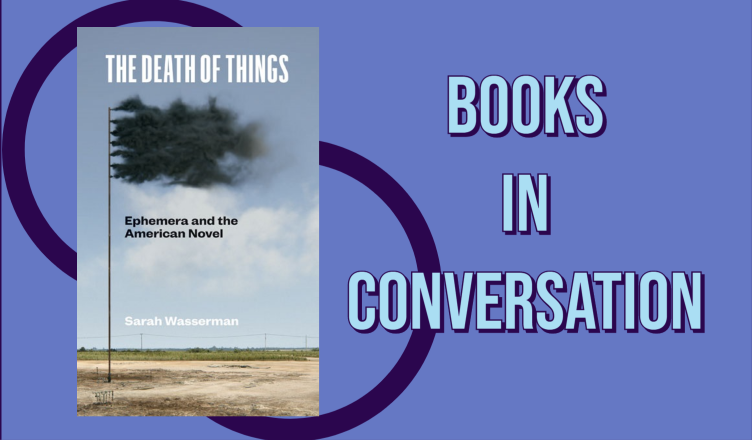 On Thursday, November 19, 2020, Dan Sinykin and Sarah Wasserman met on Zoom to discuss their new monographs before a virtual audience as part of ASAP’s Books in Conversation series. Kinohi Nishikawa introduced the two and moderated the event. At the end of a long, challenging semester but the beginning of a dark, difficult winter, to gather as colleagues and friends and be together in intellectual community was a rare balm.

Dan’s American Literature and the Long Downturn (Oxford University Press 2020) argues that to find the meaning of our apocalyptic times we need to look at the economics of the last five decades. Find Sarah’s remarks on Dan’s book here.

Sarah’s The Death of Things: Ephemera and the American Novel (University of Minnesota Press, 2020) examines literary representations of disappearing objects in American culture from the beginning of the twentieth century until today. Below are Dan’s remarks on Sarah’s book.

Sarah’s The Death of Things (University of Minnesota Press, 2020) is a phenomenal and fundamental book. It investigates what it means to be a human being. It is, as she writes of Marilynne Robinson’s Housekeeping, “a meaningful examination of our limits and the longing they generate.”1 Transience is its beating heart. Living into transience is difficult, as she shows us many times, but first through a virtuosic reading of an obscure piece of writing by Freud. In it, Freud and Rilke are on a walk in the countryside. Rilke sees the beauty of the landscape but he can’t enjoy it, he can only mourn that all that he sees will perish. Freud diagnoses Rilke’s sadness as pathological. But Freud himself, as Sarah points out, cannot embrace transience. He writes this account during the First World War and imagines, at the end of the short piece, that everything destroyed by the war will be rebuilt. The point, not for Freud but for Sarah, is that either we tend toward proleptically mourning what will be lost or imagining its reparation. We struggle to sit with what’s passing by. “Loss as a concept,” after all, as she writes, “depends upon the desire for things to endure.” We want solutions, certainty. Sarah invites us, in a thousand little ways, to linger—in uncertainty, questions, transience.

It is a book about attachment, our attachment to things. Across the decade during which Sarah wrote this book, things were in vogue: thing theory, object-oriented ontology, new materialism. It is tempting, especially as a grad student, to follow a hot trend. But Sarah, in fact, refused.2 Most everyone else wrote about things in pursuit of posthumanism. They decenter humans in the hope of hearing things speak. Sarah has done something resolutely untrendy, acknowledging what she learned from the new materialisms before setting them aside. She writes about things to learn about us. In so doing, she has produced a monument to the humanities. Stay with me.

They are, Guillory says, documents and monuments. Documents are “artifacts or traces of human making, action, or thought.” Monuments are “those artifacts, events, or ideas that have the most urgent meaning for us at any present moment and that most demand our recognition.” Documents don’t need to be paper. They’re any object humans made. And monuments are just documents that demand our attention now. Imagine the loss if we cast these objects into oblivion. What we do as humanists, grandly but fundamentally, is attend to the full scope of what we humans have made.

Sarah’s brilliance is to make monuments of literature’s documents only to reveal the transience and finitude of monumentality—and our attendant human grief. The movement compressed in the previous sentence is delicate and difficult to pull off, but Sarah does it again and again: walking with E. L. Doctorow’s young Edgar through the fading New York World’s Fair in 1940 in the shadow of coming war; with the Invisible Man, elevating the curbside belongings of an evicted Harlem couple, belongings that “mediate between abstract, external forces—history, environment, politics—and the subject’s interior life”; with Marilynne Robinson’s Sylvie, cultivating transience within the typically settled space of a home; with billboard saints and rare stamps. Reading with Sarah, we see, suddenly, how novels contain, have contained all along, a reckoning with what it means to be human living after generations of humans who have created and died in the sweep of time that is not easily flat and linear by mutable and devastating.

This is why I say that Sarah’s book itself is a monument to the humanities. She unlocks unseen truths in the canonical works she assesses, yes; she gives us stunning readings of Doctorow, Ellison, Pynchon, Robinson; (in a book full of dazzling readings, hers of Housekeeping, which diverts through the materiality of Emily Dickinson’s poeisis, is astonishing); but more, she does the fundamental work of showing us why and how such readings matter. Novels showcase how, through our attachment, things emerge from the cascade of documents to become our monuments; they are monuments of attachment, lingering, care; they present “a catalog of fleeting objects and insist on their aesthetic value.” They capture, like nothing else, the strange temporality of perseverance and loss. And the ultimate logic of all of this, which is to say of the humanities, is transience.

To read Sarah’s book in conversation with my own has been revelatory. We ask the same question: “How does narrative help us reckon with the transient nature of things?” We both answer against the backdrop of what feels, today, like the end of the US as it was promised to us as white children who came of age in the 90s. One must not mistake Sarah’s humanism for conservatism. She attends to structure, infrastructure, relationships with objects “that illuminate the structural underpinnings of the environment in which [they] takes shape.” She and I both exhume America’s documents of barbarism. We both address how narrative mediates between fragile humans and the hurt of history. But whereas Sarah is attuned to loss, I attend to certainty. As I write in my conclusion, “apocalypse is a bid for control amid chaos. It is a grasp for certainty in a world that has become incomprehensible.” I see now how personal this is. I’m bad with mess. I grew up good at math and philosophy, especially pure math and formal logic, anything with clear answers. I was bad at anything, like literature, without clear answers. I went to grad school to grapple with my attachment to certainty. Again and again, my mentors have counseled me to linger. My book on apocalypse is an investigation into my and our communal demons, the end of lingering.

Sarah is my latest mentor. She says: linger with mess. Her goals are unapologetically, bravely earnest. She is, as she writes of a moment in DeLillo, “aspirational without being ironic.” Hers is an easy book to linger with. As she wrote in January 2019 for a little rag called Post45 and its new editor (me), “I’m desperate to see more empathy and compassion on the page, in our profession, in politics, and god knows online…. Might we challenge ourselves to infuse our criticism with the wit and kindness that we encounter in so many of our most treasured objects of study?” It is in this spirit she herself writes; she gives us what she knew we needed.

Sarah aspires for more humanity, wiser attachment. She wants us to care—about things, yes; about literature, absolutely; but mostly about each other. We badly need her voice now.

Dan Sinykin is Assistant Professor of English at Emory University. He is the editor of Contemporaries at Post45.