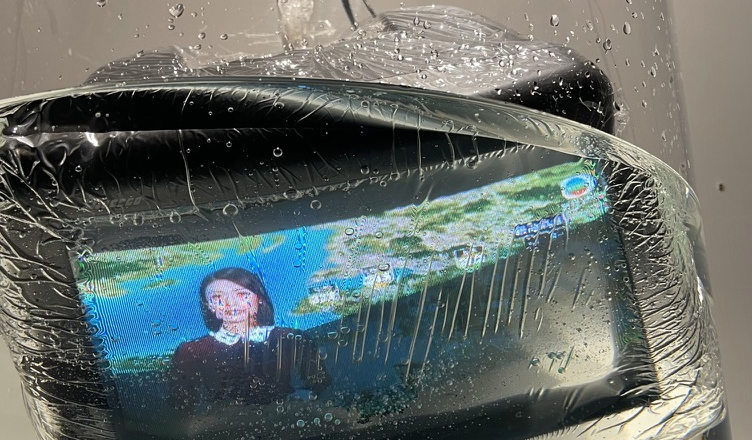 I Would Rather Hold My Breath, Because Breathing You in Brings Tears to My Eyes, 2021.
Image courtesy of the artist.

This collection of essays on “postcollapse art” begins with a consideration of the art practices across territories commonly referred to as “the East” and their global diasporas since 1989, and focuses on two examples from Bulgaria and Turkey. This time-space bears witness to the collapse of multiple real or imagined ideological, geographical, and economical borders, as well as the onset of new global mass migrations and widespread ecological crises.

To speak of 1989 is to speak of revolutions. All across the world, from east to west and north to south, 1989 carved new social realities wherein the topographies of power simultaneously collapsed and were cemented. Equally impactful were the shifts in aesthetics and attitudes of peoples who recognize the disappearance of meaning, erasures of citizenships, exile, and the literally mined landscape as a daily reality. To speak of art since 1989 is to speak of trampled categories and the emergence of new art critical contexts. No longer to be ordered through the confines of nations and regions, art since 1989 introduces a cross-border thinking about art; or rather, a thinking with disorder as the very condition of our emergent contemporary.

When MOMA compiled its critical anthology, Art and Theory of Post-1989 Central and Eastern Europe (2018), the interest was to track the “massive changes and ripple effects that the dismantling of socialist regimes across Central and Eastern Europe had on artistic practices and critical theory of the last thirty years.”1 The 407-page volume painstakingly and rigorously describes and deepens the study of contemporary arts from this dynamic region spread from the reaches of the former Berlin Wall to the fringes of the former Yugoslavia. Each of the chapters exposes the failures of “Eastern democracy” and its “dirty liaison with contemporary neoliberal capitalism” in a globalized world.2 Thus, in the gesture to move beyond the national is also a refusal to accept the emergent art marketing canon.

Likewise, the Former West project group’s comprehensive study, Former West: Art and the Contemporary After 1989 (2016), positions its intervention against the category of “West and the Rest” systems thinking. They insist on a contemporaneity “at odds with itself…the heterogeneous simultaneity of clashing and conjoining temporalities, in which no cultural or geopolitical time-space would stay in its proper place—not even the west.”3 Pointing out the inherent west-centricity of the discourses on “the East,” the Former West group cautions against the dual-edged tendency to provincialize art “post-1989,” for doing so would only reproduce the “system-competition of the Cold War paradigm.”4

Expanding upon these studies, we begin to wonder what connections there are to be found in other 1989s, and indeed, in other easts? What might we see in a conversation between, for example, the 1989 of China and that of Iran when the subject is unspeakable in both? Or of the “unfettered state and private repression” across so many countries despite whatever ended along with the Cold War?5 What of the decolonial option comes to surface in the comparative folds of the Global South and Arctic Russia?6 These questions are not merely attempts at inclusion in a system premised on exclusions, but an insistence to be and to imagine ourselves otherwise no matter the constraints of our conflictual time-spaces.

The MinEastry of Postcollapse Art and Culture (MPAC) was conceived as a research project in 2019 to study contemporary art from East Europe, West and Central Asia, and their widespread diasporas. In 2021, MPAC opened a physical not-for-profit artist-scholar-run project space in Portland, Oregon, to exhibit contemporary art from and about these diverse regions. Among MPAC’s initial aims was to establish a network of artist and art professionals whose formative years were marked by the collapse of the Soviet Union and the afterlives of new social and political realities. The series of collaborations and positive responses received from artists to MPAC’s calls inspired additional goals to see our world more widely “from eastward out.”7 Our first open call, for the exhibition titled 1989, received responses from artists living and working virtually in every continent, with submissions from East Asia to South Africa to Latin America, and beyond. This inaugural themed group exhibition selected nine artists to launch the series of 1989s to unfold in the coming year.

Hong Kong based artist, Fung Yee Lick Eric’s I Would Rather Hold My Breath, Because Breathing You in Brings Tears to My Eyes, 2021, is an installation and video of a live television report on the weather while it is encased in a tub of water collected by the artist’s dehumidifier during lockdown in his apartment on June 4th. According to the weather report, the highest and lowest relative humidity that day was 89% and 64% respectively.

Born in the border town of Cheb, Czechoslovakia, artist Lenka Holíková’s Black List, 2021, is a collection of 280 names of those who died trying to cross the border between Czechoslovakia, Germany and Austria during the period of February 1984 and December 1989. The black graphite and pin needle etching of their names recalls their dying hours as death by electrification on barbed wire was most common.

Mexico-based artist, Rodrigo Prian García’s Family Album series, 2019, takes erasure and disappearance as both the process of artmaking and the subject of the artwork, in an attempt to write absence into presence both literally and conceptually. In doing so, the work recalls the meaning of disappearance in Mexico, as well as the history of doctoring photographic documents to erase or write out persons from the archival record.

The exhibition also features projects that comment on personal memory, political fantasy, and survival. The recycled canvases (2021) of Switzerland-based Naomi Middelmann and the diary sketches (1992-1997) of former East Berliner, Hagen Klennert, are both based on the artists’ eye-witness accounts of seeing the Berlin Wall collapse. Polish artist Kasia Ozga’s cork sculpture, Mouth-to-Mouth (2014), of the interior of a human mouth, recalls the ‘80s-era fears about the future of biosecurity. Former Soviet artist Anna Syarova’s Comrade Che (2021) is a remake of the famous Soviet-era cartoon character, Cheburashka, ruminating on the innocence of childhood through embroidery, textile, and graphite. Czech-American immigrant artist Nathaniel Praska’s gritty oil painting, Monster Head (2020), confronts the failed promise of prosperity in the US and present-day economic collapse. Finally, conceptual artist Vladan Kuzmanovic from the former Yugoslavia exhibits literal nothingness with Nothing (2018).

Respecting the specificities of local contexts, we seek a comparativism for thinking with the peoples from these highly politicized and rapidly shifting geographic spaces. Moreover, with its strong emphasis on diaspora, MPAC also envisions to establish a platform for articulating migrant life experiences as integral to the study of the global contemporary at large. Indeed, the frustration of migrant and minoritized artists living in the United States, especially those who are the minority-minorities, has been central to contemporary art since 1989. Those who do not visibly fit within a North American definition of diversity find themselves rendered invisible in the institutional spaces, including in the calls for identity-based work. MPAC then takes on the additional, and perhaps the primary goal, to function as the platform for artists from community-less populations to take control of not only their own image but also the means of their representation.

For ASAP/J’s special issue of “Thinking With,” we bring together artists and scholars representing their thinking through the past and present complexities of Turkey and Bulgaria. Each of the three essays that follow expands upon postcommunist hyper-modernities and new media interventions, questioning the prevailing assumptions on identity, memory, and collectivity. Turkish-American artist and cofounder of MPAC, Ilknur Demirkoparan, discusses the formative experiences of her migrant upbringing on her art practice. Bulgarian artist and scholar, Mariya Tsaneva, presents the inconsistencies of urban renewal projects for the shaping of public memory. Academic Stefka Hristova centralizes the vantage of East Europe for the study of artificial intelligence and new media.

Vuslat D. Katsanis is Associate Professor of Literary Arts and Studies at The Evergreen State College in Olympia, WA, and a cofounder of the MinEastry of Postcollapse Art and Culture in Portland, OR. As a scholar of comparative literature, film, and visual culture, her work focuses on post-1989 Turkish and global migrant cultural productions and critical theory. Her works and translations have appeared in, among others, New Cinemas: Journal of Contemporary Film, Interstitial: A Journal of Modern Culture and Events, Bosphorus Review of Books, Portland Review, and Necessary Fiction. Her art has appeared at the Highways Performance Space and Gallery in Los Angeles, Sonorities Festival of Music in Belfast, and the California Institute of the Arts in Valencia. She holds a Ph.D. in Comparative Literature from the University of California, Irvine, with a certificate of emphasis in Critical Theory and a M.A. in Visual Studies.