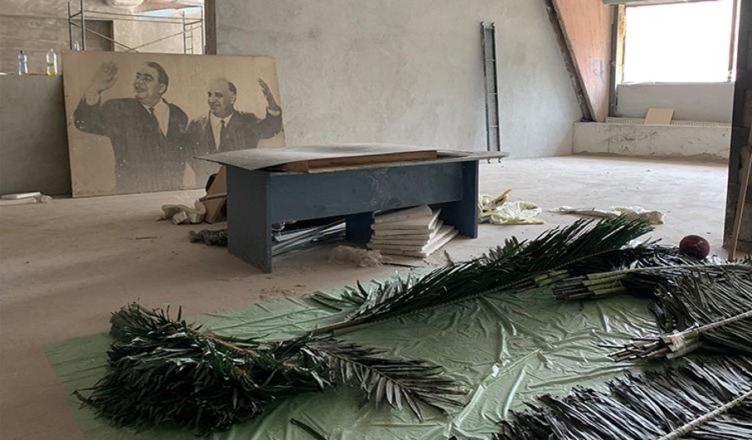 Cities are layered with stories that can be read visually through their buildings and public spaces. In the urban visual space of Sofia, Bulgaria, public buildings like Sportshall “Festival-68,” also known as Festivalna Hall, tell their stories through their renovations. Built in 1968 to host the Ninth World Festival of Youth and Students, it was designed by architects Ivan Tatarov and Doncho Vladishki as a sports hall for indoor athletic trainings within a bigger complex on the hill of Sofia’s central Reduta District. Emblematic of communist Bulgaria’s Brutalist architecture, Sportshall “Festival-68” combined function, form, and construction in an impressive concrete geometric shape. The building’s concrete exterior and repetitive simplified elements on the façade make it one of the ten masterpieces that Brutalism in Bulgaria has generated as Tasheva and Davcheva point out in their 2019 essay “The local Development of Brutalism in Bulgaria.”1

Despite its historical and architectural significance, the building today bears little resemblance to its origins in both look and function. Now renamed Asics Arena, the building tells the story of the wider urban transformation processes in Bulgaria and the implications of capital and public memory since the collapse of communism in 1989.

On November 10th, 1989, just one day after the fall of the Berlin Wall, the long-serving communist leader Todor Zhivkov was ousted by his Politburo, which marked the beginning of political reforms toward democracy and the end of the communism in Bulgaria. Along with the political transition to a free-market democracy, public buildings had to undergo operational changes in order to sustain themselves as they were no longer exclusively state property. This shift in status also had an impact on their appearance. The sudden loss of state funds resulted in the abandonment of numerous public venues, many of which remain in shambles to this day. In 2007, when Bulgaria became a member of the European Union, new businesses and foreign corporations began to buy such buildings in bulk. In the 2010s, more and more international companies took over and remodeled the public buildings that were once distinct examples of national architecture. As is the case in Asics Arena, the commercial acquisition of such historical buildings tended to entirely reshape and convert them into unregulated profit-generating venues.

When Sportshall “Festival-68” was first built, it was conceived as a multifunctional hall to host athletic events as well as large-scale political activities in support of the then ruling Communist Party. Actually, the distinctness of the architecture correlated with the grandeur of the political event for which it was originally built, namely, in honor of the Ninth World Festival of Youth and Students in 1968. This event was the second largest international event for youth that took place in Sofia after the worldwide competitions for student-athletes- Universiade from 1961.

That same year, young people across the world began revolting against state militaries, authoritarian rule and post-war elites of governments, fighting for civil and political rights. The anti-Vietnam War movement was a shared cause that brought the youth together in 1968. Student-led protests across Japan, United States, Poland, Italy, Spain, France, Yugoslavia, West Germany, Brazil, Mexico, and Pakistan proved that it is possible for young people to bring change.

When Bulgaria hosted the Ninth World Festival of Youth and Students in 1968, it used the slogan “For Solidarity, Peace and Friendship.” This Soviet-sponsored event brought together 20, 000 people from around 130 countries with leftist ideologies. The aim was to enhance the influence of the Soviet model of socialism among the youth. After the previous two festivals in the “neutral” capitals of Vienna (1959) and Helsinki (1962), the influence of the USSR made the organizers re-evaluate their goals and organize the event in a capital that was far from big political tribulations and revolutionary ideas so as to prevent unwanted escalations among the youth.2 While this event appeared to be a global forum for promoting peace and friendship among communist youth and students, it suppressed any conceivable debate about shared student struggles in the rest of the world.

When Communism fell in Bulgaria in 1989 and the process of democratization began, the sports hall had to adapt to the new reality. Over the next several years and with the country’s embrace of democracy, the Hall began to accommodate additional activities. In the 1990s, it first became a concert venue for alternative and rock music, then skateboarders and inexperienced drivers started testing their skills in the building’s empty parking lot. Soon the entire front façade of the building became covered in graffiti, and finally, financial difficulties drove out the athletes in 2011. Asics Arena was revived in 2017 with a substantial renovation project cosponsored by ASICS Europe to modernize the main hall, accommodate a large restaurant and add new private parking spaces.

As a Bulgarian citizen and resident in a nearby neighborhood, I watched the building’s transformation over the years with curiosity. Aided by archival materials and on-site visits, in 2019, I developed an art walk to tell the stories told and buried in urban renovation projects. During one site visit, I noticed an important detail. A personal landmark of the historical research of the building was the huge double portrait (around 2m x 4m) of Todor Zhivkov, the longest ruling Bulgarian Communist leader, and Leonid Brezhnev, the general secretary of the Communist Party in USSR at that time. I saw how these leaders’ pictures were laid aside while the construction workers prepared the new flower-shaped ceiling decorations. Historically, the Festival took place just two weeks before the Eastern Bloc armies invaded Czechoslovakia to repress the country’s democratic reforms carried out under the leadership of Leonid Brezhnev. As the year was marked by student riots and demonstrations, the major goal of Todor Zhivkov’s government was to suppress and obstruct the exchange of ideological and political ideas among the youth. These leaders’ portraits, now cast aside in favor of floral-decorations, represented the ironic disregard of the communist party line concerning the youth. At the same time, it exposed the disappointed reality of the country’s transition to a free market economy, now completely subsumed by corporate capitalism.

The art walks to Asics Arena became valuable for reigniting collective memory. My main aim was to present the architecture and the memory of its past use as powerful resources for future dialogue. To further demonstrate why this building is of such architectural significance, I highlighted the visible parts of the façade and its architectural elements using archival photographs during the explorational walk. To emphasize the scale of the Ninth World Festival of Youth and Students event, I involved music from the promotional compilations from 1968 and presented original design materials.The tour’s exploratory and entertainment format involved a combination of the celebratory atmosphere of the Festival in 1968 and the present-day appearance of the building.

Today, the site can be seen as an important place for understanding local cultural and political movements and serves as an excellent example of socio-political debates in an international context. Asics Arena illustrates an on-going tendency to cover the historical layers of Bulgaria’s recent communist past, thus limiting the opportunities for public discussions. Nevertheless, art and cultural mediation show that “the file of memory is never closed; it can always be reopened and reconstructed in new acts of remembering.”3

Mariya Tsaneva is an artist, a graduate from the National Art Academy in Sofia, Bulgaria, and currently a Ph.D. candidate at the University of Applied Arts Vienna. Her practice explores the presence of history and memory in the city through the collection of stories of existing places and buildings with the aim to make past and future come together. She is interested in the process of combining both artistic and research approaches to identify and interrogate different social, political, and economic issues.