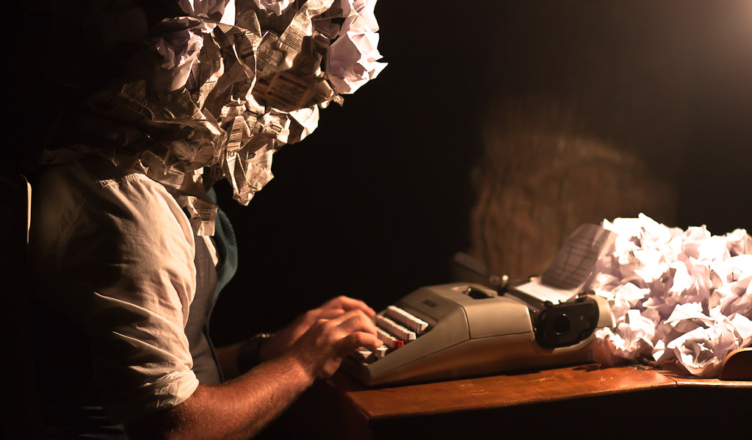 “Writer’s Block I” by Drew Coffman.

My grandmother used to say of her children: “I don’t want any of the credit or any of the blame.” Since becoming the Film Editor at the Los Angeles Review of Books in 2019 (incidentally, five months after becoming a mother), I think of this line as I work with scholars to translate their expertise for a public readership. People talk about “credit” as props given or received, suggesting a transaction with a clear end. By contrast, credit’s cousin, “credibility,” amounts to trust, which must be cultivated and maintained between the editor, writer, and reader. My editorial work on writers’ essays rarely receives a formal byline. Still, if someone deems an article I’ve commissioned as misguided or sloppy, the question is always: Where was the editor on this one? Doesn’t this place have editorial standards? Editors and writers of public scholarship share in this burden of credit and credibility, working together to foster good-will not only between the text and its reader but, potentially, between an inclusive scholarly community and a curious, if dubious, general public.

Within the academic gold-standard of the peer-reviewed journal, disciplinary credibility is premised on a deep, detailed knowledge of prior work in the field. But public or popular scholarship – be it journalism, criticism, or the great American “think piece”—requires a different architecture of credibility-formation. To issue timely arguments that capture the attention of a public readership, writers, with the help of their editors, must forgo the strictures of academic scaffolding, oriented around the literature review-as-credit-crawl. In the case of public writing, credibility derives in significant part from an authorial mastery of story and style, where rigor meets razzle-dazzle.

But where is the line between “academic” and “popular” writing anyway? Critics such as Helen Sword (Stylish Academic Writing) and Amitava Kumar (Every Day I Write the Book) urge writers to infuse elements of narrative storytelling and formal experimentation into their scholarship. Kumar’s volume even practices what it preaches, published as a hybrid collection of short-form literary analyses, notes on craft, and ruminations on process. And books like Going Public and The Engaged Scholar, as well as the recent Post45 cluster featuring historian Bécquer Seguín’s, “Why Write for the Public?”, start to lay out a rationale for adapting one’s scholarly know-how for a popular audience.

Comparatively little has been said about editing—that is, the commissioning and revising of—this particular kind of work. The magazine or website editor shoulders her own literary burden, because, usually, she knows her venue’s readership better than the author. Two things should remain the case across outlet: first, that most people read for pleasure, not promotion, and second, that they want to luxuriate in a good story well-told. (By contrast, academics read like it’s their job, because it is, so they peruse strategically, usually in the service of their own research.)

In generating public scholarship, the writer and editor need to rely on one another’s strengths. The former is the credible “expert” on the subject, while the latter is entrusted with questions of form and readership, as well as the practical constraints of workflow. The writer and editor must agree that the goal is not to produce the most comprehensive or definitive account. Readers want to be talked to like they are smart and come away from the piece feeling smarter. The public-facing writer’s goal, then, is to be compelling and accessible, because no one feels smarter having abandoned an article mid-read.

In this process, the complexity of the writer’s research is transformed, not obliterated. The public scholar is not entitled to claim she invented the wheel, but credit and credibility merge when the author realizes that how she presents her influences and forerunners is as important as that she does so. To that end, a citation in public scholarship is not the faithful act of due diligence prescribed by conventional academic standards, but it can preface the argument at hand, offer support in service of the author’s claims, or provide political solidarity, as evidenced by the Cite Black Women movement. Practically speaking, I ask writers, whenever possible, to choose paraphrasing over block quoting and to favor hyperlinks over footnotes. The popular citation, skillfully executed, becomes the bridge between story and style.

These editorial guidelines aid in my ability to cultivate the writer’s authentic voice and to work together with the writer to discover the essay’s best possible form. Irony, exaggerated fussiness or precision, heartfelt personal disclosure, an eye towards the contemporary: all these make popular scholarship a joy to read and write. When the writer matches her voice to the subject matter, argument and readerly investment are executed in a single, smart swoop. But if the prospect of injecting hard-boiled language into your film noir essay makes you want to down a bottle of rye or hide your face under a steel-gray fedora, you might instead invoke the stark lighting of these movies through lyrical prose and dramatic scene-setting. Sarah Wasserman and others have noted that humor is an excellent tool to abridge long-running intellectual debates, point out ideological incoherence, or echo the absurdity of the subject matter, though nothing is funny when it’s forced. When trying to draw out a writer’s distinctive perspective or style, I ask: what moments in this text strike me as special, individual, even a bit oddball? What actor would I hire to voice the audiobook? What has the writer done here, and could this piece go farther or deeper in its claims?

Many of my suggestions that I give writers are technical (turn the rhetorical question into a definitive claim, divide that paragraph in half), so the prose is sleek, lively, and equipped to showcase the essay’s key claims. As an editor, I am entitled – nay, required – to acknowledge my own ignorance and to parlay my readerly curiosity into feedback. In editing film criticism, I frequently tell writers that “Show me what it feels like to watch this movie without telling me what happens.” Then I do what editors do and ask how I can help.

Like most editors, I write, and like all writer-editors, I read. Editors should read indiscriminately—political book reviews, Afrofuturist YA novels, hermit crab flash fiction, cereal boxes—and not treat it as “time off,” since this work prepares you to explore new frameworks and formats from essays’ initial conceptions. Over time, collect your favorite models of personal, hybrid, or otherwise innovative criticism to share with your writers and to feed your own imagination. To edit popular scholarship means to become a super-fan of the form if you aren’t already, attuned to the thrills of reading for fun.

Popular scholarship bolsters the credibility of the liberal arts in a world of austerity measures, hiring freezes, and higher education cutbacks. But don’t do it for the Provost—do it for the people. These academic conversations can make an impact beyond a university setting. The public wants access to the academy, whether it knows this or not. As Eric Hayot notes, even amidst a “startling loss of epistemological prestige of the humanities” in our contemporary moment, terms like male gaze and intersectionality migrate into our collective consciousness, shaping the way people read the texts that surround and drown them. Some scholars are equipped to intervene in the culture wars, fighting against bad-faith critiques of critical race theory with insight and style. Others subject cultural objects to the patient, merciless machinery of close analysis, and that matters too. Writers: your work doesn’t have to go viral to promote change or introduce something new and vital into the public square. And editors: waive the credit, forget the blame, and focus on showing those Instagram influencers what it really means to “curate the culture.” Together with your writers, you can re-imagine and re-make the best the humanities have to offer.

Annie Berke is the film editor at the Los Angeles Review of Books, a podcast host at the New Books Network, and the author of Their Own Best Creations: Women Writers in Postwar Television (University of California Press, 2022). Her scholarship and criticism have been published in Camera Obscura, Public Books, Feminist Media Histories, Ms., and the Historical Journal of Film, Radio, and Television.