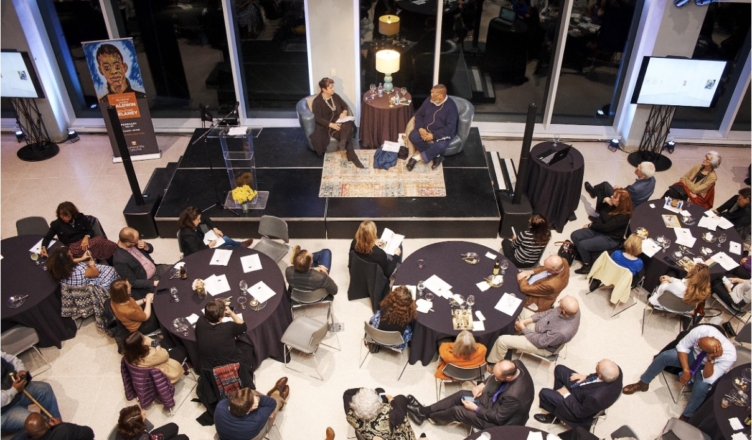 The author in conversation at the symposium “In a Speculative Light: The Arts of James Baldwin and Beauford Delaney.”

The “Humanities For All” online database hosted by the National Humanities Alliance currently showcases nearly 2000 examples of public humanities projects and provides a general topographical mapping of public humanities work, from unidirectional university programming that is simply opened to a public audience to international consortia involving numerous academic and public partners.1 Many private foundations have leaned in to this public mission as well—an example being the 2018 redefinition of the prestigious Andrew W. Mellon Foundation as a social justice organization supporting public humanities work.2 At a time when neoliberal and neo-“traditionalist” values threaten to gut or even eliminate humanities disciplines on campuses worldwide and to instrumentalize humanities work in the name of a “workforce development” agenda, the humanities can fight back by reminding administrators, boards, and legislators that universities—particularly US public land-grant institutions—have been predicated since their inception on the idea of humanities education in and of itself as a public good.3

Of importance to ASAP/Journal should be the fact that concurrent with this developing discussion about the role of the public humanities within universities has been a reformulation of art perspectives around participation, relationality, reciprocity, and engaged art and scholarship, from the “public arts” and “relational aesthetics” movements of the 1990s and early aughts to new theories of care, resilience, hope, and coalition building of the past fifteen years.4 Today, new approaches to publishing, arts criticism, and poetics emphasize public problem solving, public education, and the dismantling of privilege undergirding society’s (and often higher education’s) resources. They also offer alternatives to “star systems,” monograph culture, and critical rhetoric and methodologies that address only a coterie audience of scholars. Engaged with public humanities almost since their inception, today’s humanities centers and institutes support interdisciplinary and public-facing work that academic departments on their own are often too strapped or understaffed to include in their roster of activities.5

As someone who has devoted the past fifteen years to investigating the commons, dialogic aesthetics, and reciprocity, I am invested heavily in that idea that nothing necessarily sets public humanities apart from other forms of scholarship—or, to put it differently, that scholars should have deep expertise in a subject but bring that expertise into multiple contexts of dissemination.6 Public humanities work allows scholars to engage with artists/creatives, enrich and learn from local and regional collectives, invite communities inside and outside the university into educational conversations, and cross siloed disciplines and departments on their own campuses.

I can give a quick example of what I mean. In spring of 2020, through the auspices of the UT Humanities Center (UTHC) and the NEH, I hosted a symposium about the friendship between, and works of, the writer James Baldwin and the visual artist Beauford Delaney. The symposium was the UTHC’s contribution to The Delaney Project, a consortium of Knoxville organizations that worked alongside longstanding Delaney champions in the art world to restore and celebrate the reputation of the painter Beauford Delaney.7 The symposium was scheduled to run during an extraordinary public exhibition of Delaney’s painting at the Knoxville Museum of Art, Beauford Delaney and James Baldwin: Through the Unusual Door, that featured more than 40 of Delaney’s paintings and works on paper. Delaney and Baldwin met in 1940 at Delaney’s Greene Street apartment in New York City when Baldwin was a teenager and Delaney was thirty-nine years old. They were friends, even family, for almost forty years, until Delaney’s death. Both artists were sons of preachers from the American South, were prolific craftsmen who moved through many artistic genres and modes, were influenced by jazz and blues, were obsessed with the connotations of color and light, and were gay expatriates from the US alienated by homophobia and racism that permeated society and arts culture. Born in Knoxville, Tennessee in 1901, Delaney lived in Boston and New York before following Baldwin to Paris, where he lived the rest of his life; in every phase of his career, he moved among the greatest musicians, writers, and arts patrons of his day, a beloved figure and mentor to younger artists, though he lived in abject poverty and suffered from mental illness throughout his life. His painting moved from realism through modernist modes to arrive at a unique form of abstractionism; light was at the center of his aesthetic, and he painted realistic and abstractionist portraits throughout his lifetime, a number of which were of his friend Baldwin.

Running three weeks before my university went fully online in response to the Covid-19 outbreak, the “In a Speculative Light” symposium featured keynotes by Fred Moten and Hilton Als as well as the work of twenty-four scholars—including David Leeming, who had been Baldwin’s assistant and was the only person who had produced authorized biographies of both artists.8 The symposium hit a number of markers of scholarly excellence. It was funded in part by a $50,000 Collaborative Research grant from the National Endowment of the Humanities, and the grant narrative was posted by the NEH at its website as a model proposal. Papers were revised into short articles after the symposium and the collection of essays is now under contract with a well known university press.9 Thus faculty who attended brought their research expertise to bear on the topic at hand. But as important, the comradery that emerged among different constituencies during the semester was transformative. During the symposium, for example, UT faculty from the Department of Art sponsored “The Portrait Project,” a public pop-up studio in the symposium space in which they drew portraits of symposium speakers and illustrated to attendees (including students and members of the public) the portraiture techniques for which Beauford Delaney was famous. This studio was in dialogue with an exhibition of Delaney’s own never-before-exhibited work in the Student Union Gallery, hosted by the executor of the Beauford Delaney estate; paintings could be purchased after the symposium run. 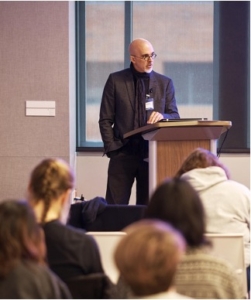 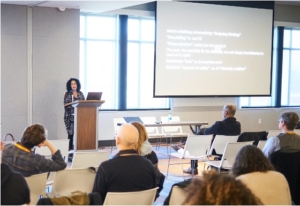 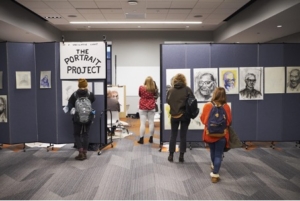 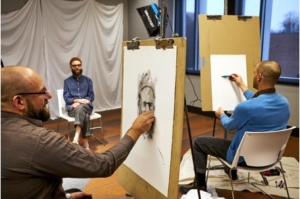 Key members of the public involved in The Delaney Project—including Monique Wells, who “zoomed” in from Paris—were invited to speak as part of the symposium luncheon not as guests or a local welcoming committee but as experts in Delaney’s work and life who could teach the academics in the room something from their own efforts on Delaney’s behalf. The opening night reception and keynote by Hilton Als was held at the Knoxville Museum of Art for symposium speakers but also for many members of the public (more that 200 people attended), including members of The Links Knoxville chapter, Black community leaders and arts patrons, and members of the Baldwin and Delaney families.10 Events for students were run on campus preceding the symposium: a library display of Baldwin’s and Delaney’s work; online library research guides about Baldwin; a film screening of I Am Not Your Negro; large banners on the university boulevard and in downtown Knoxville celebrating Delaney and the symposium, created by UT’s award-winning Printmaking program; and coordination with UT classes around Baldwin’s and Delaney’s works. The book we produce should be a foundational resource about Delaney’s work, but with its color plates, it should be a great coffee-table book as well. 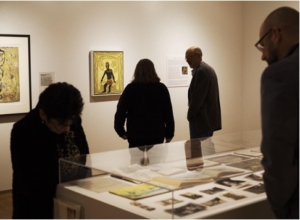 The upshot of this public humanities event was that the University of Tennessee forged new connections with its adjacent communities, undermining some long-standing town/gown tensions and communicating the willingness of the university to recognize expertise and historical knowledge in those communities equal to if not even more developed than that of its academic experts—as well as a willingness to connect communities sometimes alienated by race relations in the state of Tennessee. The UT Humanities Center established itself as a catalyst for research excellence, community engagement, and support for UT arts and humanities faculty. And new pathways were opened for future projects with regional partners outside of the university that might support additional grant-funded opportunities for research and student internships, for making visible to university stakeholders the outstanding arts and humanities work done by community members, and for underscoring to regional communities that the university was a community partner rather than a city on the hill disconnected from its constituency.

Does all arts research need to be “publicly engaged”? Of course not. But we need to acknowledge that as discourse escalates about academic activism and the potential of the arts to intervene radically in society, our work must be disseminated beyond insular coteries. The move to online publishing and recognition for publishing in public magazines and review journals is a move in this direction. But in many ways, today we are seeing a return to the academic star system as cultural capital becomes something marketable for universities as well as authors, while adjunct faculty earn less than minimum wages. Surely this cannot be the direction in which we want to go as a profession. Defining the public humanities as a public good, and the contemporary arts as a reciprocal conversation with our public fellows, seems more in line with our stated values.

Amy J. Elias is UT Chancellor’s Professor and Distinguished Professor of English at the University of Tennessee, Knoxville and since 2017 has served as Director of the UT Humanities Center. Her work primarily focuses on interdisciplinary arts aesthetics, narrative theory, contemporary literature, and humanities engagement with publics and sciences. A principal founder of ASAP: The Association for the Study of the Arts of the Present, she is also the founding co-editor-in-chief of ASAP/Journal. She is the author of Sublime Desire: History and Post-1960s Fiction (Johns Hopkins, 2001), winner of the George and Barbara Perkins Book Prize from the International Society for the Study of Narrative. She is also co-editor of The Planetary Turn: Relationality and Geoaesthetics in the Twenty-First Century (Northwestern, 2015), co-editor of Time: A Vocabulary of the Present (NYU Press, 2016), and editor of the forthcoming Speculative Light: The Arts of Beauford Delaney and James Baldwin as well as the author of more than 35 articles and book chapters. Her current book in progress concerns how the arts enact dialogue across boundaries, including the boundaries of language itself.